Accessibility links
The Activists At The 'Women Deliver' Conference Weren't All Female. Meet 5 Guys Who Embody #HeforShe : Goats and Soda Typically women are the ones who get involved with reproductive rights and family planning. But there are exceptions.

#HeforShe: Why These Guys Speak Up For Women's Rights

#HeforShe: Why These Guys Speak Up For Women's Rights 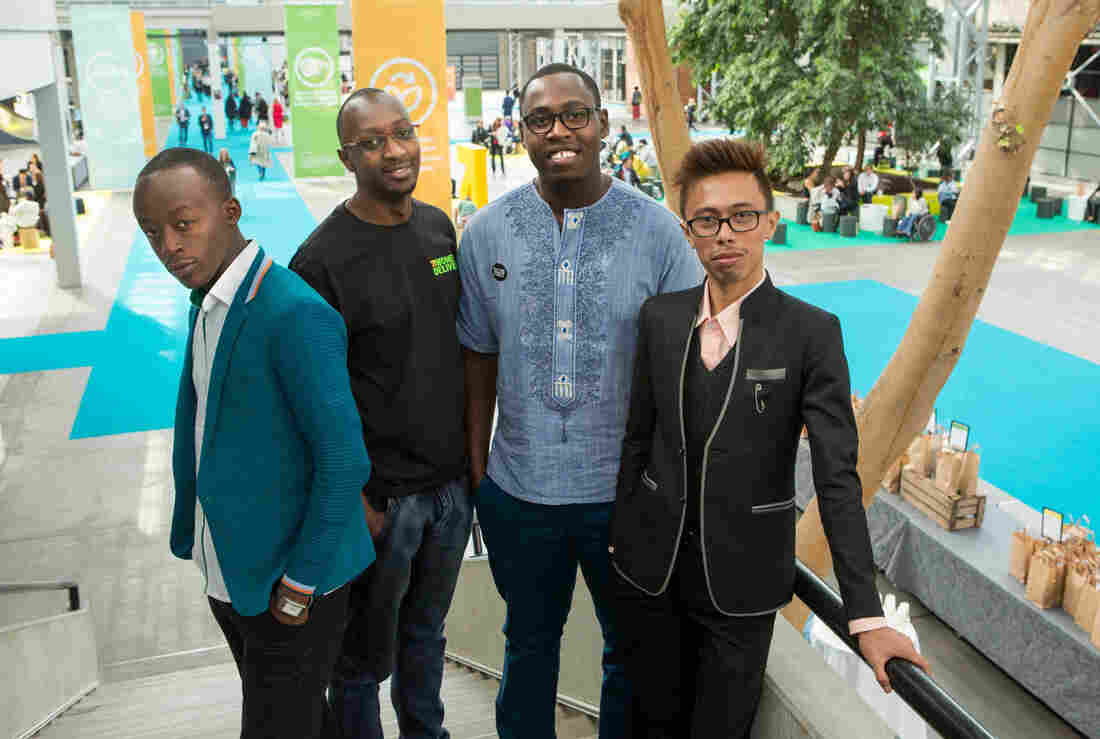 They're guys who stand up for women's rights. Left to right: Patrick Segawa and Steven Twinomugisha of Uganda, Mark Gachagua of Kenya and Bryan Eric Mallari of the Philippines at the Women Deliver conference. Allison Shelley for NPR hide caption 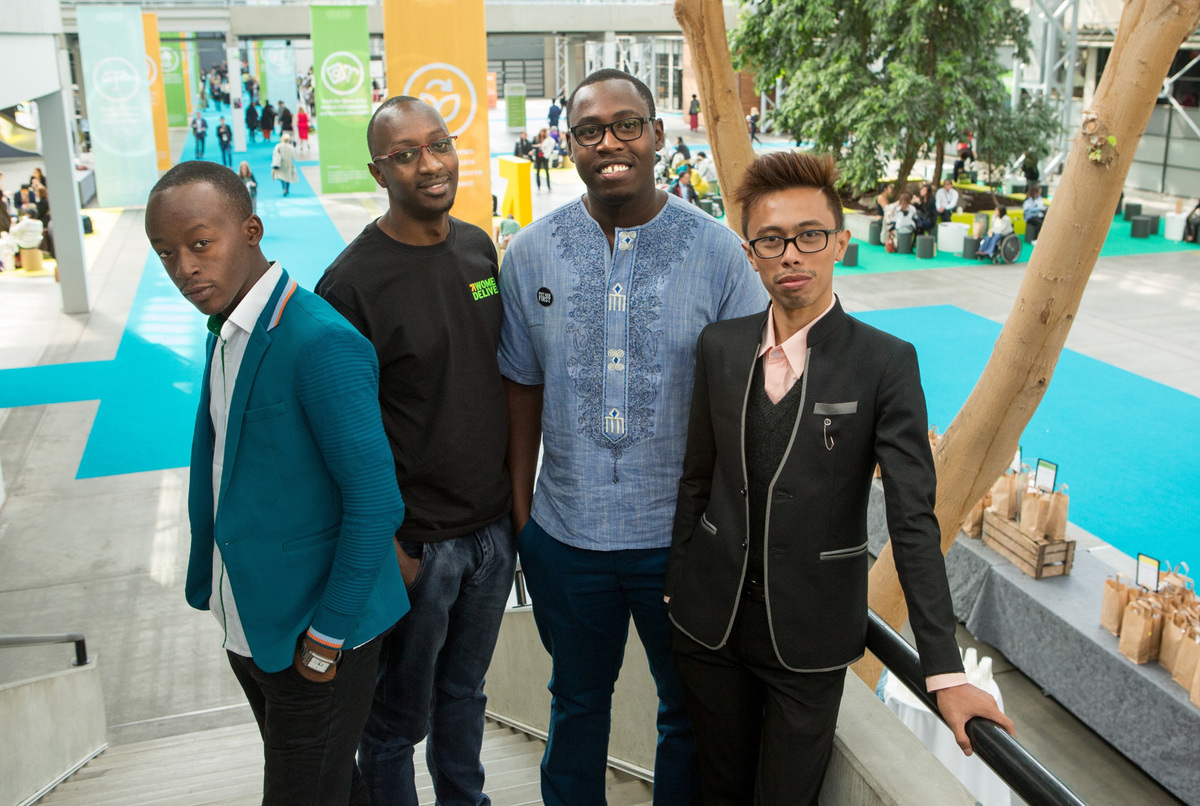 They're guys who stand up for women's rights. Left to right: Patrick Segawa and Steven Twinomugisha of Uganda, Mark Gachagua of Kenya and Bryan Eric Mallari of the Philippines at the Women Deliver conference.

I wasn't expecting to go to the world's largest conference on women's rights and interview a bunch of men.

But at the Women Deliver conference in Copenhagen last week, I met a few 20-something guys in the crowd of 5,000 people doing something that is typically a woman's job: fighting for better reproductive health and family planning.

In covering global health I've found that anything to do with bearing children usually falls on the shoulders of women. Women are expected to track their periods, choose the right kind of birth control, space their pregnancies and, in some circumstances, figure out where to get an abortion — even if it's illegal in their country.

Here's a statistic I found when reporting in India that drove that point home: in the state of Chattisgarh, more than 124,000 women had been sterilized in 2014, about 19 times more than the number of men who had undergone vasectomies.

So what makes a man decide to do something that is definitely not the norm?

Mark Gachagua, a 25-year-old from Kenya, said it all started when he first grew a beard. He realized how little he knew about human bodies and how they work and change. And so he got interested in puberty and sexuality, and he cofounded a group called Young People Advocating for Health.

The softspoken 25-year-old educates Kenyans about reproductive health as well as social issues that threaten women. When he heard of a 17-year-old girl whose family was pushing her into marriage, he threatened to call the authorities since child marriage in Kenya is illegal. The family backed down, and the teenager was able to take final exams and continue her education.

Yemurai Nyoni, a 26-year-old youth advocate from Zimbabwe, became interested in women's issues because of his friend Tecla. Married off as a child, she was sexually abused by her spouse and contracted HIV from him as well. Tecla's story made Nyoni think of the freedoms he has a man — freedoms that women don't always have.

"I'd liken it to slavery," he said of what some women go through when it comes to sex and marriage. To get his message across, he founded Dot Youth Organization.

Bryan Mallari, a 22-year-old from the Philippines, was invited to become a peer educator seven years ago from a friend at church and was trained by the Family Planning Organization of the Philippines and Y-PEER Pilipinas. He was struck by the fact that his country has the highest rate of teenage pregnancy in Asia — one in 10 women between 15 and 19 is already a mother — yet the Catholic church, with its conservative views on sex and contraception, sometimes condemns the use of condoms. So he wanted to learn more.

His friends have a hard time even talking about sex — kids and teens use euphemisms like "flowers" and "birds" for their genitalia. Mallari, who has his teaching license, believes in using the correct anatomical language to get people talking about sexuality and reproductive health in an open, honest way. Even if it can sound crass to the untrained ear.

These unusual activists are big believers in bringing guys into the conversation, or at least into the room.

"We don't separate boys and girls when we give classes," said Steven Twinomugisha, a 27-year-old in Uganda who works with nonprofits to change attitudes about gender and family planning, using workshops and videos. "[A boy] has a sister at home or a girlfriend. If you put him on the sidelines, the ignorance continues."

A lot of their work involves busting myths about sex or the body. Twinomugisha and his friend, Patrick Segawa, laughed about one girl's comments at a Copenhagen session. She claimed that black-colored condoms create too much heat during sex.

The men are encouraged by new national policies pushed through by advocacy efforts. The Philippines enacted its first reproductive health law in 2014, calling for more access to contraception and education, and Zimbabwe is attempting to create a more effective sexual health curriculum in their schools — partly a response to the 1.6 million people living with HIV/AIDS in that country.

The male activists all face roadblocks. Other men might think it's strange for guys to talk about sexual health in public. They balk when the educators suggest buying sanitary pads for their girlfriends. And women sometimes resent the idea of men coming to talk to them about their bodies or how to fight child marriage or bride price, a practice in Zimbabwe of giving a girl's family money, technically in exchange for the children she will bear.

"People say, 'Why are you trying to mess around with marriage — that's sacred,'" said Nyoni. 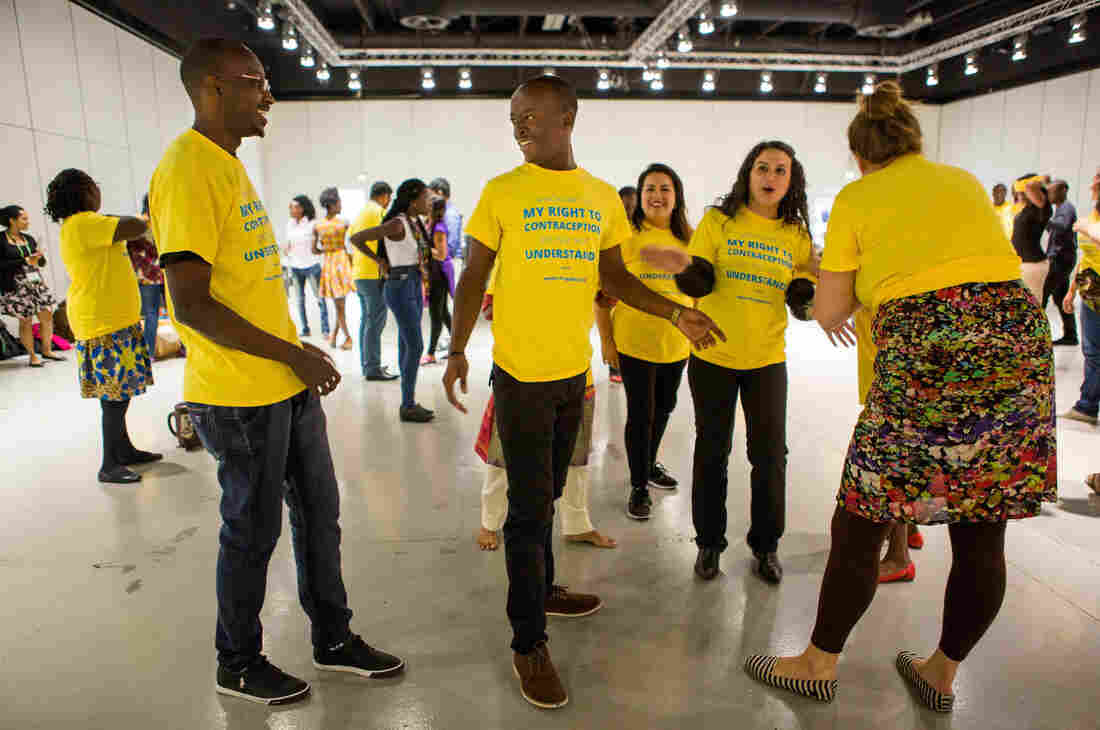 It's flash mob time at the Women Deliver conference: With the help of female delegates, Patrick Segawa of Uganda, center, and Steven Twinomugisha, left, stage a skit about a guy who couldn't find condoms. Allison Shelley for NPR hide caption 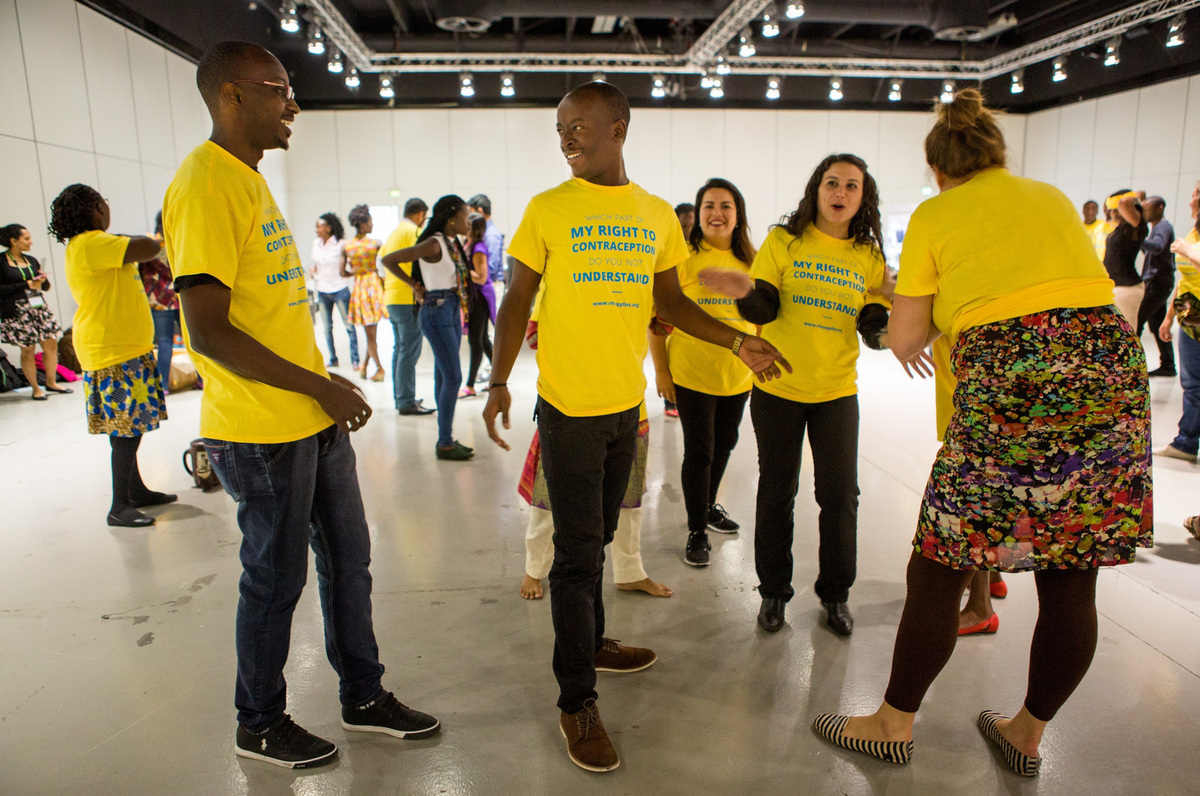 It's flash mob time at the Women Deliver conference: With the help of female delegates, Patrick Segawa of Uganda, center, and Steven Twinomugisha, left, stage a skit about a guy who couldn't find condoms.

Twinomugisha said he navigates those moments with humor and creativity. At the conference, he and Segawa created a skit about a guy who can't find condoms late at night. They choreographed a dance routine, complete with plenty of hip thrusts. And they performed it with a flash mob.

The advocates have learned to recognize their boundaries. For Mallari this can mean knowing when to refer a girl or woman to a health provider instead of trying to give her advice, usually when it comes to deciding on a type of contraception or taking a test to find out if she's pregnant.

For Nyoni, it means knowing when he shouldn't do anything at all, deferring to the women around him. That understanding, he said, has informed not just his work but the way he lives his life.

"There are times when I've had to become silent," he said. "You have to know when there's someone better than you to speak."

Ankita Rao is a producer for WNYC's health podcast, Only Human.