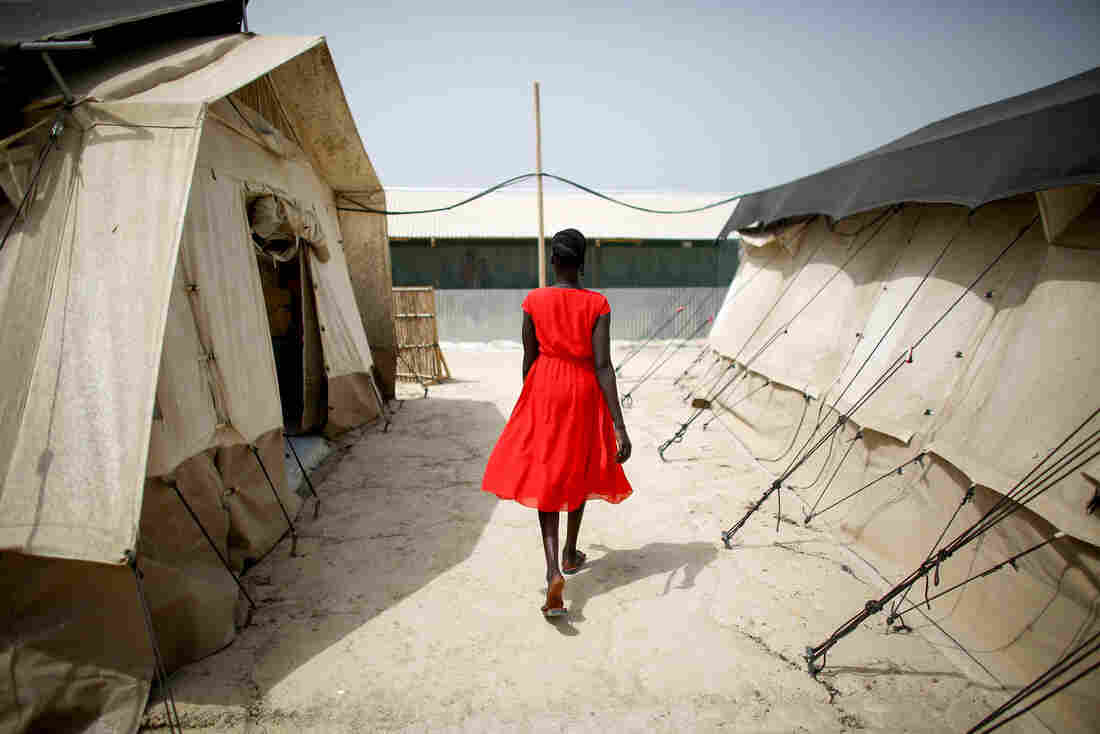 A woman walks between two of the tents that house the hospital wards. Most of the camp's residents are women and children. David Gilkey/NPR hide caption 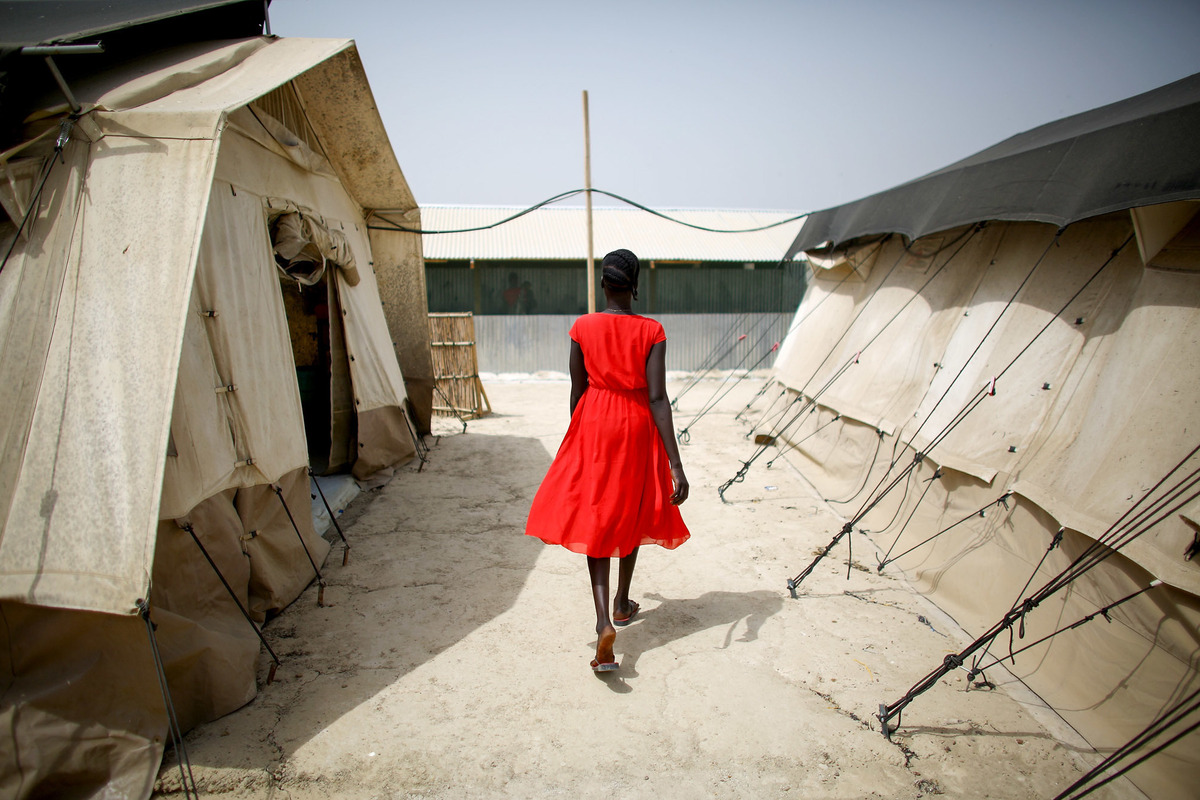 A woman walks between two of the tents that house the hospital wards. Most of the camp's residents are women and children.

For five days and five nights in February, NPR reporters Jason Beaubien and Kelly McEvers were "embedded" with Doctors Without Borders in the middle of nowhere. They were inside a massive United Nation's compound framed by earthen walls topped with razor wire. It's known as the POC — Protection of Civilians site. Heavily-armed U.N. peacekeepers patrol the perimeter of the compound; more than 120,000 civilians live there, seeking a safe haven in a war-torn country. 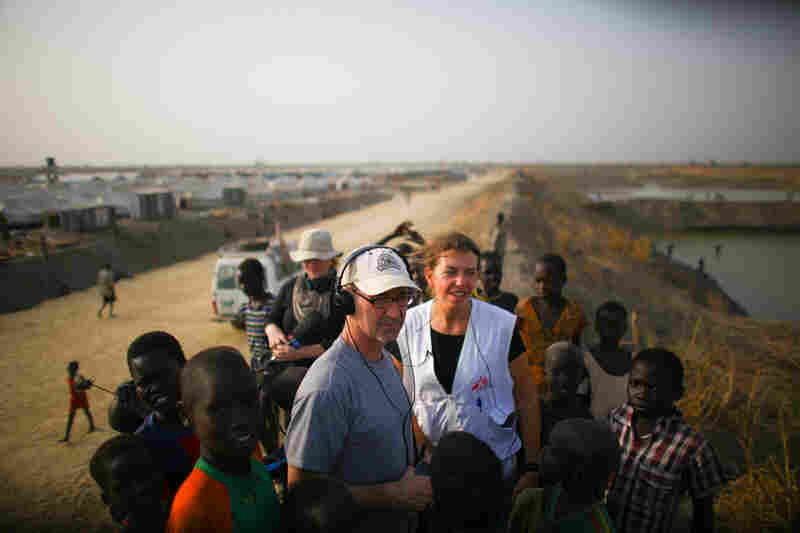 Jason Beaubien talks with Stefania Poggi, who manages the Doctors Without Borders operation. They're standing next to the drainage ponds dug to keep the camp from flooding in rainy season. Kids often jump in for a swim. David Gilkey/NPR hide caption 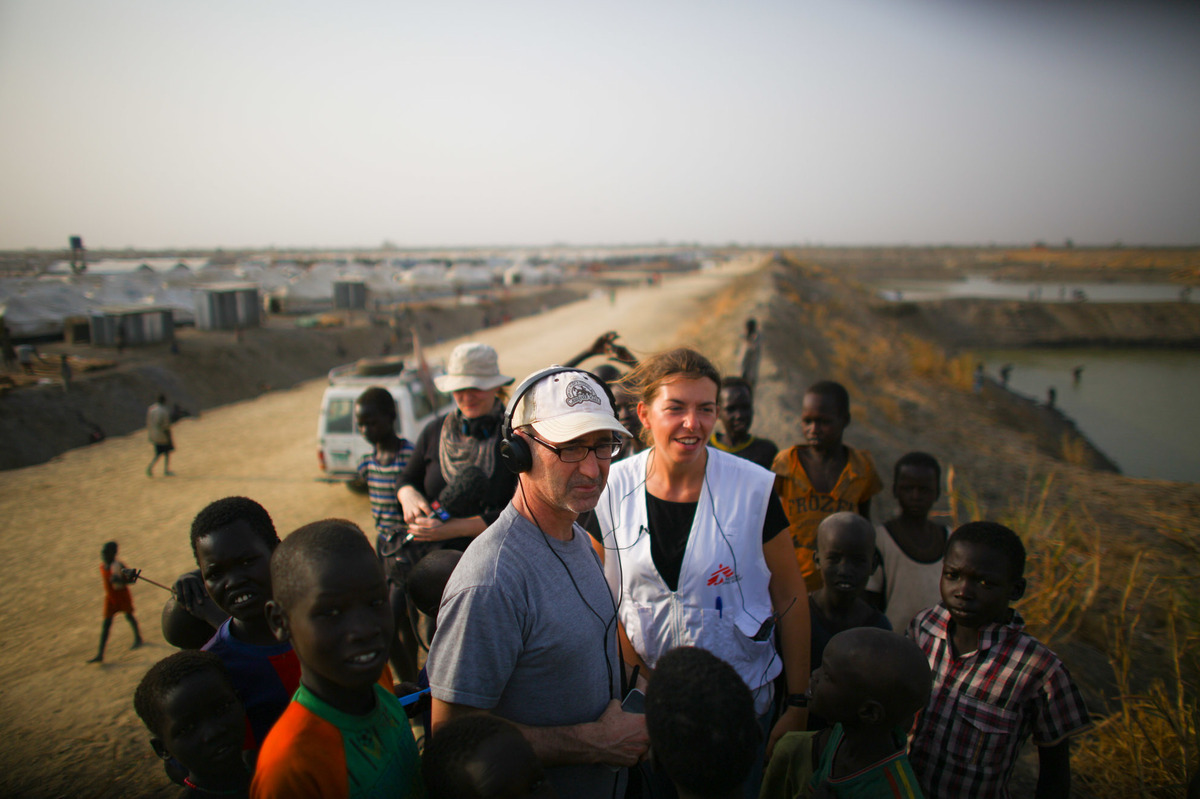 Jason Beaubien talks with Stefania Poggi, who manages the Doctors Without Borders operation. They're standing next to the drainage ponds dug to keep the camp from flooding in rainy season. Kids often jump in for a swim.

Doctors Without Borders, also known as MSF, runs a hospital at the camp — the only hospital in that part of South Sudan. The wards are all in tents. The medical staff lives in smaller tents behind the medical wards. Beaubien and McEvers got to know the doctors, the other medical workers and some of the patients who stream in, suffering from malnutrition, malaria, HIV/AIDS and many other ailments.

We spoke to Beaubien about what this trip was like.

So I guess it's not easy to get to the camp.

How far is the camp from Juba?

Probably 600 miles north by dirt road or just over 300 miles as the crow flies.

Could you have driven there?

One of the things about South Sudan is it's simply not possible to get out and drive around much of the country. The roads are all dirt, a lot of them are completely washed out, and from a security perspective, the changing dynamics of the conflict mean that even if you could drive over the road you don't know whether it's safe.

MSF, for instance, flies absolutely everything they need in to the Bentiu camp, from medicines to hammers and nails to the diesel fuel to run their generators. Even the toilet paper gets flown in here. One of the logisticians joked that if they ran out of toilet paper, people would quickly get angry with him.

Were you able to connect to the outside world?

You're very cut off. We did not have cell service. You had to get onto a satellite phone just to make phone calls, even that didn't work very well. You very much feel like you're in an outpost at the end of the earth. They had internet in the dining hall but it really wasn't very good. It was extremely slow. Enough to check your e-mail and that was about it.

One of the things about being there is you very much felt like you were there, in this place, and I felt very disconnected from my life back home. And when we left and went back to the capital, Juba, where they have restaurants with menus and cold beers, it felt so luxurious.

The South Sudanese who've sought refuge in the camp — how did they get there?

Some people who are relatively close might be able to get a ride on one of the beat-up old buses or pickup trucks that move around Bentiu, the town near the camp. But most of the people are arriving by foot. They are simply walking across the countryside to get there.

It's a very harsh landscape. It feels semi-arid, like it's on the verge of being a desert. It's very dusty, incredibly hot. There's a rainy season as well and when the rains come everything floods and the camp turns into this big field of mud. They've done a lot to try to put in drainage ditches and deal with the water but it's on a completely flat plain and flooding has been a big problem.

How hot did it get when you were there?

Not exactly good sleeping weather. And I assume there's no air conditioning.

You're just in a tent with fans on a little pedestal and mosquito nets. It was still fairly hot at night. But by morning you would want to shut the fan off. By that time it had gotten pleasantly cool. But as soon as the sun peeked up above the horizon, temperatures started going up.

Who lives there? Men? Women? Children?

The majority of residents of the camp are under the age of 5. 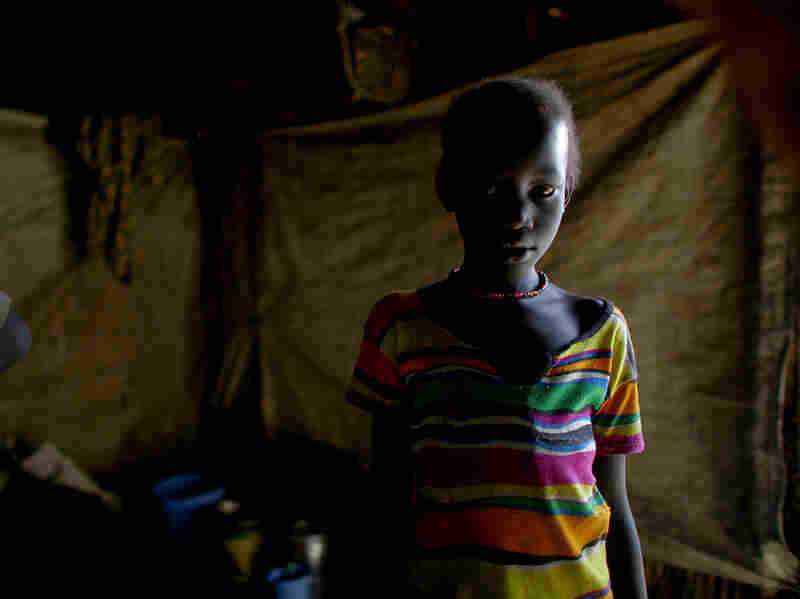 One of the camp's 124,000 residents in her shelter. David Gilkey/NPR hide caption 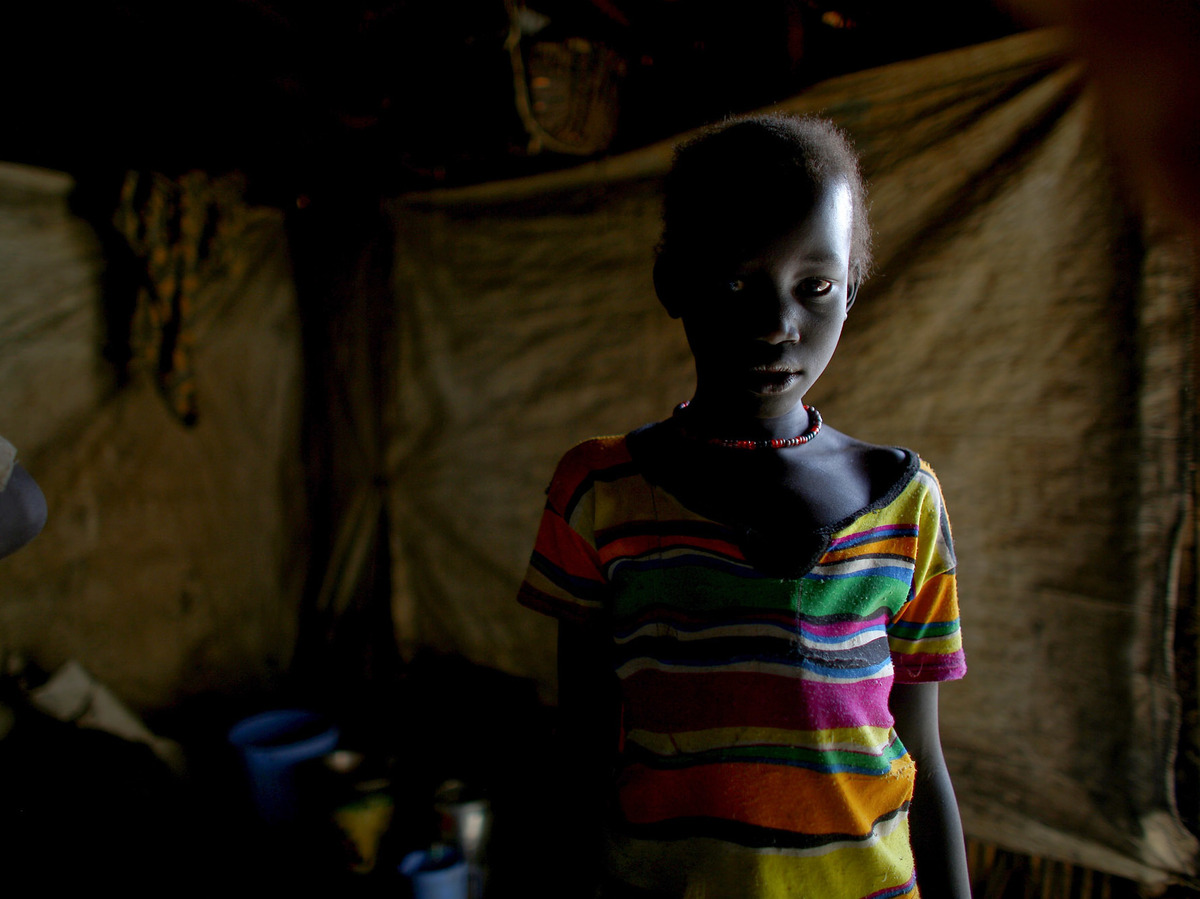 Are both parents typically around?

Many of the families are mother, a female relative who might be an aunt or a cousin, and some kids. There's definitely a dearth of young men. They're caught up in the war.

Are the kids in school?

There are a couple of schools run by aid agencies. But you see kids of school age running around constantly. If you ask their parents why they aren't going to school, the parents say there aren't enough spaces in the schools for them.

Do the South Sudanese who live there ever go outside the walls?

During the day people come and go. Many women go out of the camp to collect firewood so they have something to cook on and also it's the one thing they can sell to get a little bit of spending money. But there's been a serious problem of women being raped outside the camp when they're collecting firewood.

Do you have to go out of the camp to buy stuff?

No. Inside the camp itself there are markets. They sell used clothing, tins of sardines, rice and other staple foods.

So the food rations handed out to residents aren't enough?

Even the World Food Programme will tell you that they don't provide enough in the food rations for a family to completely feed themselves for a month. So everyone is scrambling to try and supplement the rations that are coming from the U.N.

In your story you focus on some of the foreign employees at the hospital – doctors, a midwife. But there are South Sudanese employees as well. Why didn't you name them?

Doctors Without Borders asked that we don't identify their local staff All the local staff are residents of the camp who've also fled their homes so MSF is concerned for their security.. But they were quite an incredible group of nurses and other medical people running those wards who are all South Sudanese, many had jobs in clinics or hospitals before the war and had some medical training. They really were the backbone of this operation. 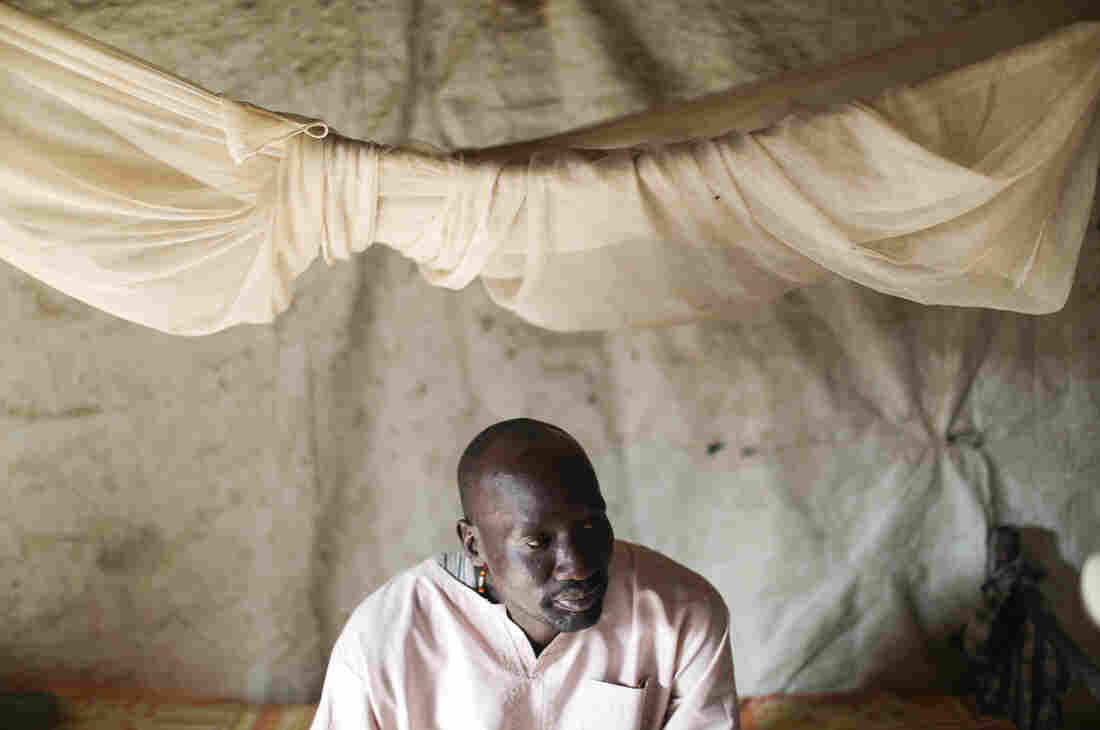 David, a South Sudanese health worker at the MSF facility, sits on his bed in his shelter. He's one of the 124,000 people who've come to the camp to escape the fighting. We were asked by MSF only to use the first names of local employees for security reasons. David Gilkey/NPR hide caption 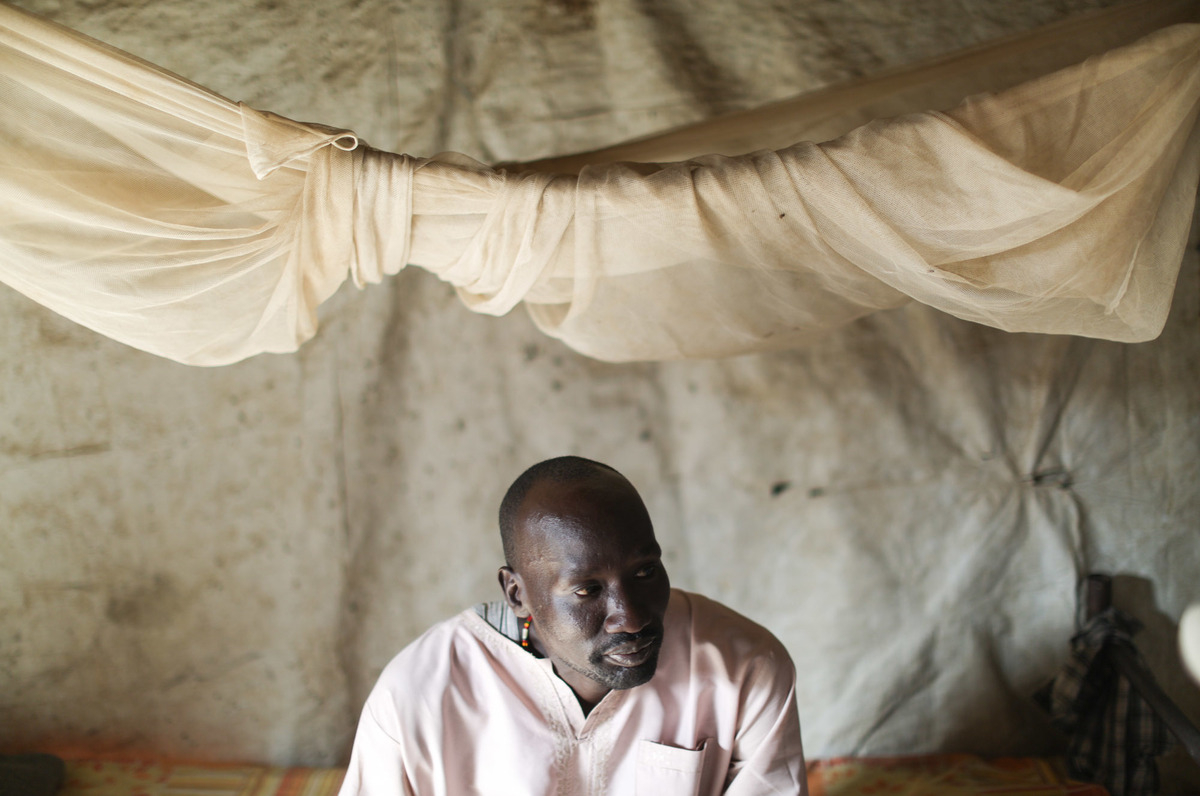 David, a South Sudanese health worker at the MSF facility, sits on his bed in his shelter. He's one of the 124,000 people who've come to the camp to escape the fighting. We were asked by MSF only to use the first names of local employees for security reasons.

Any moments where you were afraid for your safety?

One guy from the camp was working for us as a translator. When we were out in the camp in Bentiu town, at times he would lean in and basically say he was afraid of other people who were around us. He told us he was concerned that particularly as a young man he could be killed by the militias that are still operating out there. So there was a level of fear among people like him that was just below the surface. And it was that same thing when you ask people inside the camp, "Don't you want to go home?" People didn't want to go home, they were afraid of going home. It became clear to us people were not going to leave the camp right away even if a total peace is declared.

What questions did the South Sudanese ask you?

A lot of people felt that the U.S. was going to play a major role in ending the civil war, which technically ended in August of 2015 when both sides signed a peace agreement. It's something I've seen in many parts of the world, where people seemed to think that their issues are very much on the front burner in the U.S.

But the issues of South Sudan are not on our front burner, are they?

It is kind of sad, yeah.

Are there any plans to shut the camp down by a certain date?

No, the camp is not yet in the phase where it's looking toward closing down. The great fear with a camp like this is that it turns into a camp where people don't go home for generations.

Seems like a very sad time for this new country.

I was based in South Africa while South Sudanese rebels were fighting for independence from Sudan. And while I was at the camp, I remembered this quote from John Garang who was the leader of the Sudan People's Liberation Army – the main rebel group fighting against what was a fairly repressive regime in Khartoum. And when they finally won the right to break away from Sudan, he gave this amazing speech in 2005 that I always remember: "With this peace agreement, there will be no more bombs falling from the sky on innocent children and women. Instead of the cries of children and the wailing of women and the pain of the last 21 years of war, peace will bless us once more with hearing the happy giggling of children and the enchanting ululation of women."

After decades of war, he was looking forward to hearing the giggling of schoolchildren rather than the wailing of women. But he was killed in a helicopter crash a few months after independence. I wonder what would have happened if this guy, who was a very charismatic leader, had been able to guide this young country in its early days. Maybe the civil war and humanitarian crisis might have been averted if this crash hadn't happened.

It's just interesting how history plays out. Sometimes it's got to do with luck and South Sudan has certainly been looking unlucky lately.