Accessibility links
When Missing Girls Come Back From Boko Haram, They're Not Always Welcomed : Goats and Soda Family and friends are sometimes wary of the girls. They wonder if they've been radicalized or sexually "tainted." 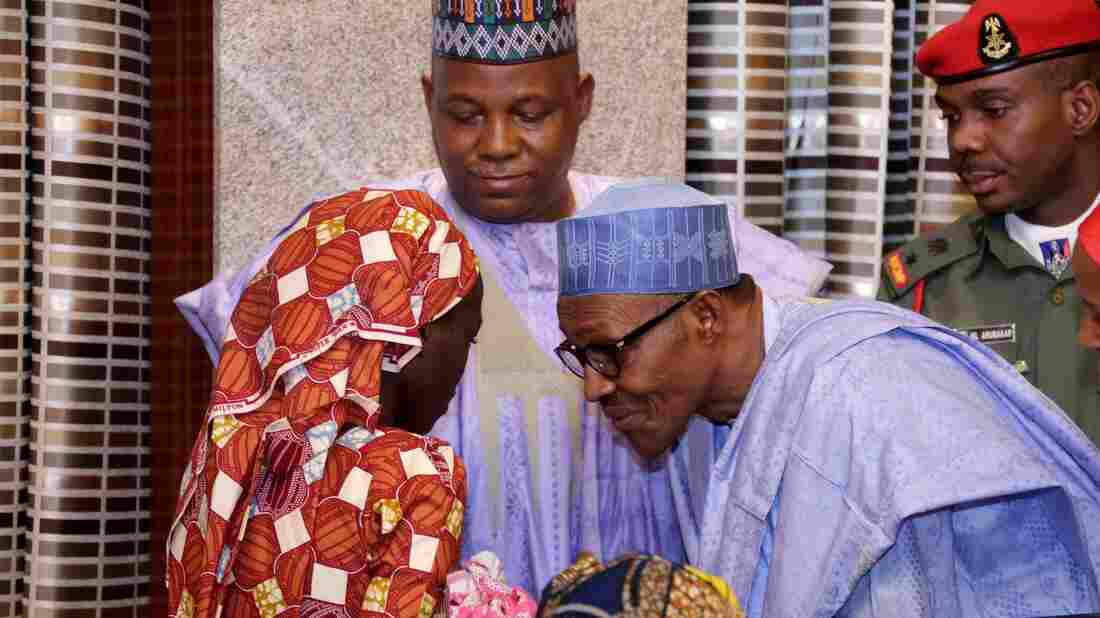 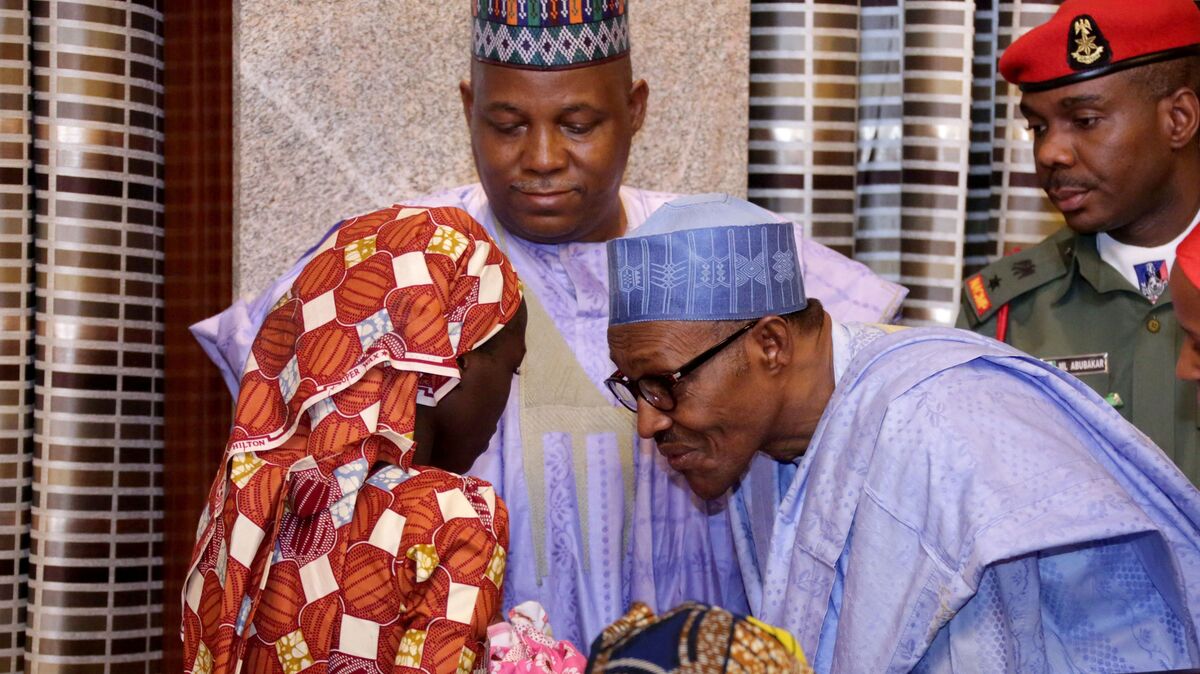 Nigerian president Muhammadu Buhari speaks with Chibok schoolgirl Amina Ali Nkeki, who was freed on May 19. She is carrying her baby. Borno state governor Kashim Shettima (center) looks on.

The headline brings good news: On Thursday morning, Boko Haram militants released 21 of the more than 270 missing Chibok schoolgirls who were abducted two years ago.

But what happens next?

The experiences of those who were formerly held captive by Boko Haram suggest the range of challenges ahead, as well as what might help — and what will not.

Although the particulars of each story differ, the former captives can be said to be "triple victims," says Rachel Harvey, UNICEF'S chief of child protection in Nigeria. First, they were abducted, "taken from their homes and often taken far away." Second, during their captivity, "the vast majority were subjected to rape." And then, when they escape or are rescued, their families "are not always willing to take them back."

That's not always the case. Amina Ali Nkeki, one of the missing girls, was released in June and welcomed by her mother. (Her father died while she was in captivity.)

But in many cases, families and villagers alike are wary. They worry that the girls have been radicalized by their captors, says Mia Bloom, professor of communication at Georgia State University and an expert in terrorism and its impact on women and children. That fear is not abstract: In 2015, Boko Haram used 21 girls under the age of 18 as suicide bombers.

Then there is the severe ostracism faced by those who are pregnant or return with children. In Nigeria's deeply religious society, sex outside of marriage is considered "an "abomination," says Mausi Segun, Nigeria researcher for Human Rights Watch.

The stigma applies to those who were abducted and their entire families. Community members often shame them with verbal abuse, insult their babies as "devils" and pressure their families to abandon them or else face isolation and disgrace. Harvey tells of one instance where a girl who returned from captivity with a child born out of sexual violence was accepted by her mother but rejected by her father and brothers. As a result, the mother and father separated.

Such a "welcome" back is why those who have not become pregnant or had a child may prefer to remain silent about any sexual violations, says Segun. One woman who had been married prior to her abduction told Segun that she feared that revealing her experience of sexual abuse might lead to community pressure for her husband to leave his "tainted" wife even if he wished to stay with her.

That is why families with the resources try to move or send these girls to a new place where they can start over, says Mausi, who in the past three years has interviewed approximately 100 girls and women who were abducted by Boko Haram and then escaped or were found or rescued and returned home. She has spoken to girls who were sent away to escape the notoriety and stigma they faced in their villages, whether to a big city such as Lagos or churches or other organizations that will take them in.

Regardless of where these girls find themselves, the traumas they have suffered are "acute" and the "scars are raw," says Harvey. Indeed, initial reports of Amina Ali Nkeki after her release described her as looking thin and weak, and limping as she walked.

It is not just the former captives who have suffered. So have their families and communities over the course of the years of conflict with Boko Haram. In many cases, UNICEF's Harvey points out, "These families have been ripped apart, experienced violence themselves, are living away from their own homes [in displaced persons camps], and undergone their own acute trauma." As a result, these families may not have the resources to provide for a returning family member who may bring an infant with her.

Programs are being put in place to help the returning girls and their families, says Harvey, who has even heard some success stories. One woman who had been abducted was initially rejected by her husband upon her return. But after talking to program counselors, he came to see she had been victimized. When he voiced fears that she had contracted HIV while with Boko Haram, she was tested. After she was found to be free of the virus, they reunited and are now expecting a baby.

What has proved most helpful is placing the returnees in peer groups with other former abductees who have experienced similar traumas. Instead of feeling isolated and alone, Harvey says, these women are able to connect with others and through such discussions and interactions begin to see a pathway to the future.

At the same time, the communities need to be involved. Identifying and gaining the support of influential religious and other leaders who hold sway is essential. Rather than outsiders telling the people what they "should" do or believe, these internal leaders can hold forums and discussions that allow people to air their worries. "They can say, 'they were victims, these are our daughters, our wives,'" says Harvey.

Radio campaigns have also begun to spread the message of reintegration. Discussion and call-in programs often will feature a psychologist, lawyer or perhaps a victim to discuss the issues and the necessity for support and understanding.

The biggest mistake would be to assume that there is a short-term fix for anyone who has felt the impact of Boko Haram, including the children born as a result of sexual violence. "The whole community has suffered," Harvey emphasizes. "All the victims of the conflict must be recognized and attended to."

An earlier version of this post stated that 219 schoolgirls were abducted by Boko Haram. The original number was in fact 276, but several dozen of them had escaped, so 219 remained missing — now 218, after Amina Ali Nkeki's return.