Accessibility links
Asking People To Call A Hotline Helped Predict Surges In Dengue During An Outbreak In Pakistan : Goats and Soda Pakistanis were asked to call and report symptoms. That simple plan led to the creation of maps that predicted where the disease would spread. 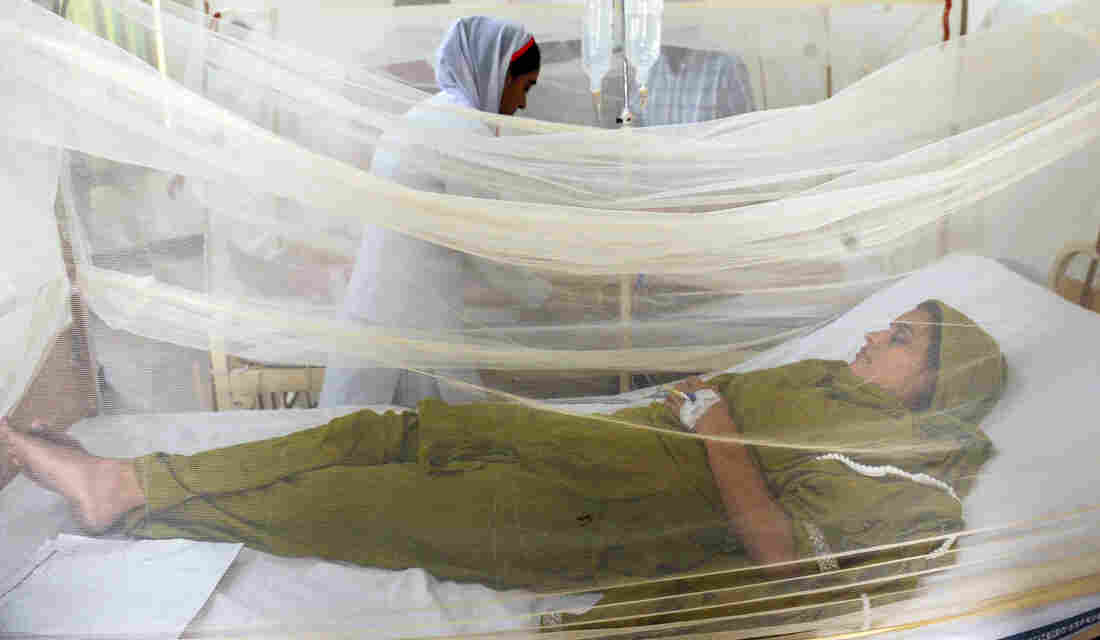 A patient suffering from dengue fever lies under a bed net in a hospital in Lahore, Pakistan, during a 2011 outbreak of the mosquito-borne disease. Arif Ali/AFP/Getty Images hide caption 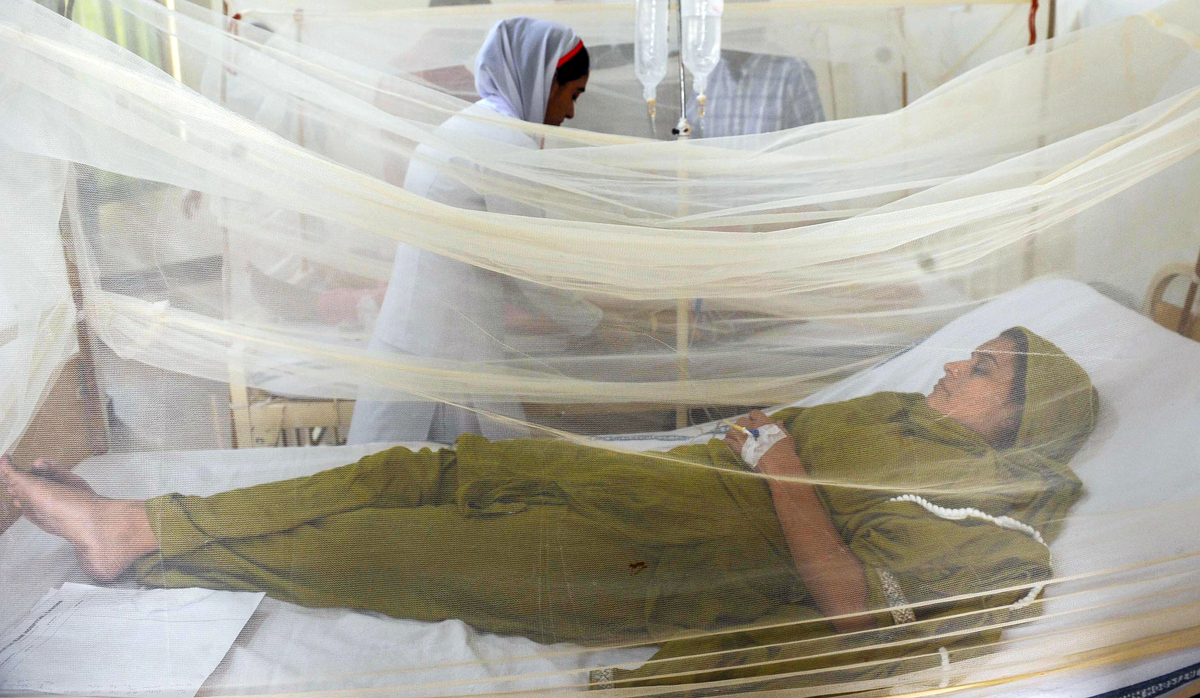 A patient suffering from dengue fever lies under a bed net in a hospital in Lahore, Pakistan, during a 2011 outbreak of the mosquito-borne disease.

In an epidemic, health professionals often struggle to answer two basic questions: Who is sick and where are they?

There are innovative digital strategies to help answer these questions.

Researchers have investigated how a spike in Google searches (for example, "What is flu?") can help them determine if a disease is spreading and how many people might be affected in a given area.

Similar information can be gleaned from Wikipedia page views. 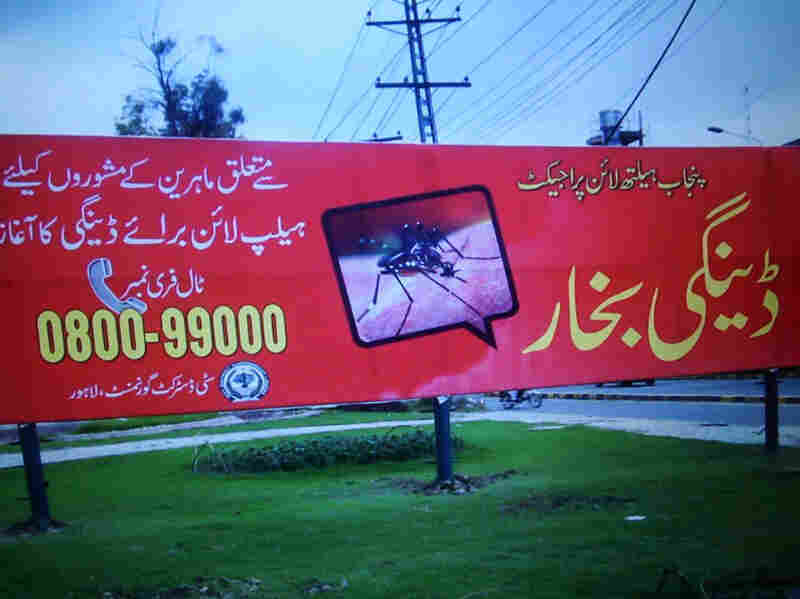 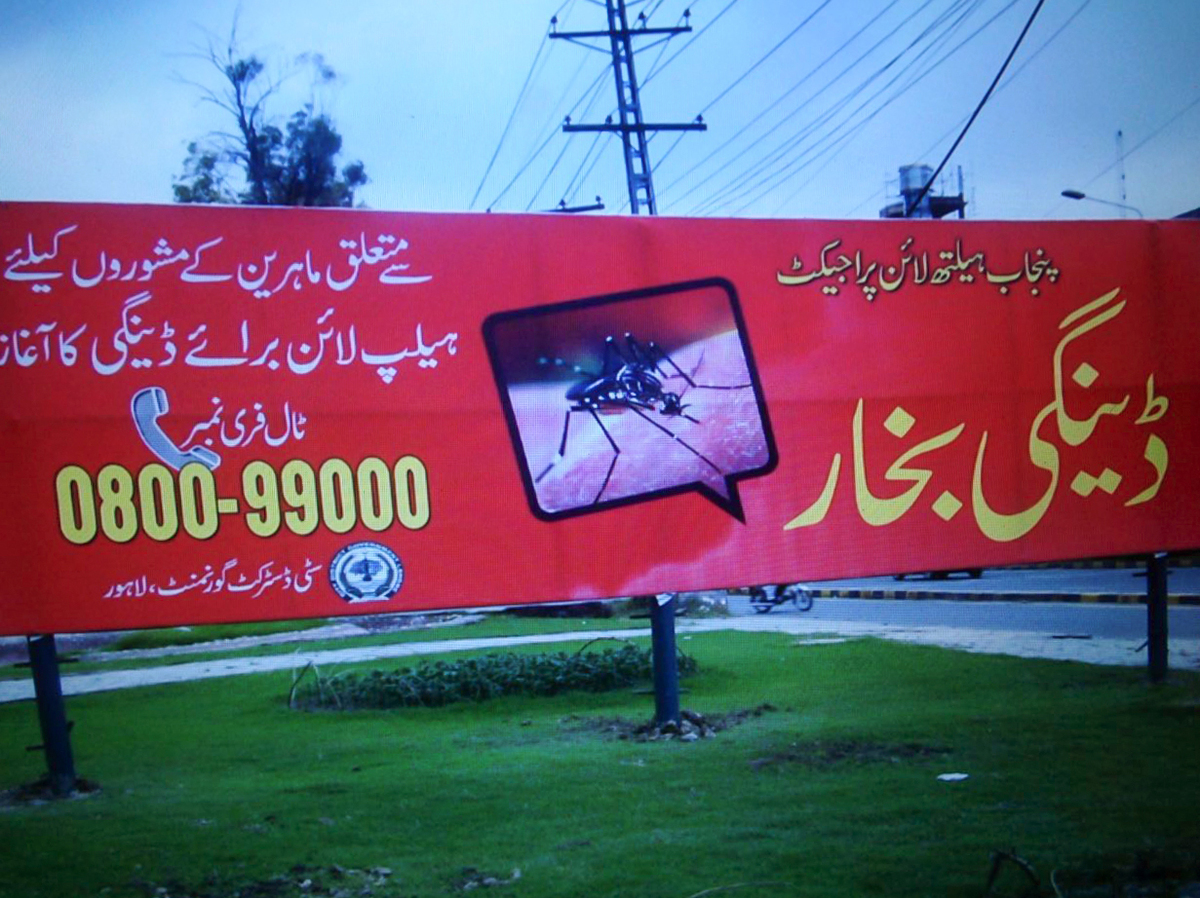 But in developing countries, where many people have limited Internet access, these predictors fall short. That's where phones come in.

The possible predictive power of phone calls is the topic of a paper published in Science Advances about a dengue epidemic that hit Lahore, Pakistan, a city of upward of 7 million.

A research team out of New York University invited people to call a hotline if they had symptoms that might be consistent with dengue. By analyzing 300,000 calls, the team could not only identify outbreak areas — they could predict future surges two weeks or more in advance.

Spread by mosquitoes, dengue causes fever, vomiting and muscle and joint pain. But it's not often fatal. With proper medical care, the death rate is typically less than 1 percent.

In this outbreak, more than 21,000 patients were affected and more than 350 people died. "We'd never had a dengue outbreak of this sort before," says Umar Saif, chairman of the Punjab Information Technology Board and a coauthor of the study. The number of cases was unprecedented in the area. "The government wasn't prepared, and we didn't know what to do. We were basically caught totally by surprise."

In its early stages, dengue looks a lot like the flu. To help the sick figure out if they had dengue or not, government officials set up a hotline, advertised it on television, radio and billboards and spoke about it at community meeting spots. When people called, trained responders asked for their addresses, read them a questionnaire about symptoms, then marked whether each case seemed to be a genuine instance of dengue.

As people began calling the hotline, Saif and Lakshminarayanan Subramanian, a computer scientist from NYU, began to notice a trend. If an area had a surge in calls, neighborhood hospitals would see a spike in patients in the following weeks. Not every patient had called the hotline, but the scientists could still forecast the number of cases based on those who did. Subramanian formed a team to devise a computer system that could make such predictions.

The researchers began to test their model in 2012, adding in weather conditions that were favorable to mosquitoes. The goal was to create digital maps for public officials, indicating areas at risk. It's unusual to have very specific information about geography in disease forecasts, but this model could predict not only patient numbers for Lahore but the districts where the disease was likely spreading.

So officials could direct scarce resources toward areas on the verge of a dengue spike. They sprayed for mosquitoes, added hospital beds, and presented progress reports.

In 2012, the number of confirmed dengue patients in Lahore dropped to 257. The disease may have naturally been on the decline, but the scientists believe the system played a critical role by directing help to the regions where it was most needed.

Since the pilot study in 2012-13, the hotline predictive system has rolled out broadly across Punjab, the province that's home to Lahore.

"Finding alternative ways to track the disease is exciting," says epidemiologist Sara Del Valle of the Los Alamos National Laboratory. She was not involved in the study but has studied Wikipedia as a means of predicting flu. Del Valle wishes the study had delved into caller demographics a bit more to ensure that these calls don't miss groups of patients of a certain age, for example.

Ben Althouse, an epidemiologist who has studied forecasts based on Google searches, said the system was especially promising because the maps are easy for public health officials to digest.

Saif says the system may soon be put to the test again in Pakistan. "Monsoon season hits the province in a few weeks," he says. "We're bracing for another dengue outbreak."

This is the second phone-related study tied to the dengue epidemic. In a report last fall, Goats and Soda wrote of the potential value of cellphone records of 40 million customers of the phone company Telenor Pakistan during a 2013 dengue outbreak: "The cellphone data [showing how people move about], added to climate information, could have been used to accurately predict both the geographic spread of this disease and its timing," according to a report in the Proceedings of the National Academy of Science. The authors cautioned that doing such predictions in real time would be difficult.