Accessibility links
Study: A Species Of Mosquito That Carries Malaria Appears To Be Repelled By The Smell Of Chicken : Goats and Soda A study finds that the Anopheles arabiensis species of mosquitoes, a major carrier of malaria in sub-Saharan Africa, is repelled by the smell of chicken.

To Avoid Malaria, Try Sleeping With A Chicken At Your Bedside

To Avoid Malaria, Try Sleeping With A Chicken At Your Bedside 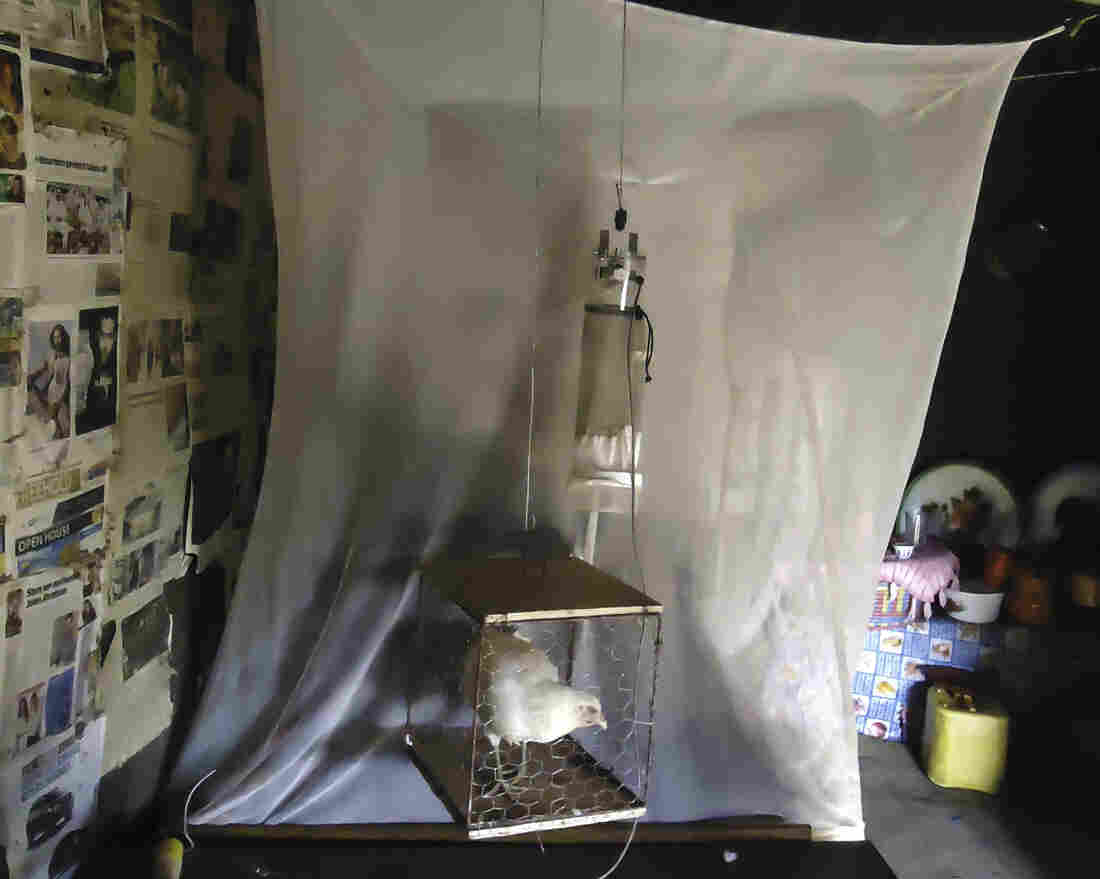 By hanging a caged chicken near mosquito traps in bedrooms in three Ethiopian villages, researchers hoped to learn how the insects react to the scent of a fowl. Kassahun Jaleta/Courtesy of Rickard Ignell hide caption 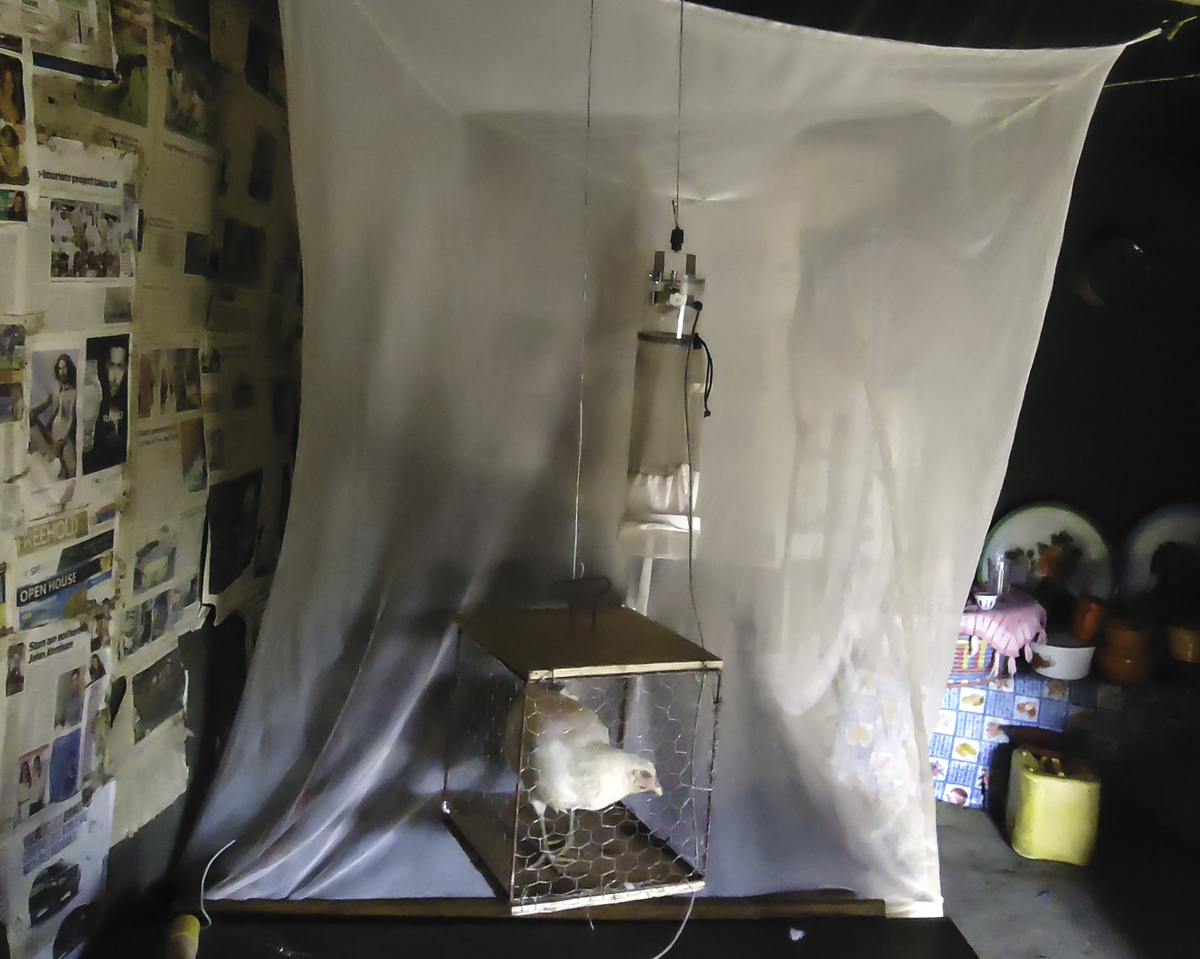 By hanging a caged chicken near mosquito traps in bedrooms in three Ethiopian villages, researchers hoped to learn how the insects react to the scent of a fowl.

Malaria, mosquitoes and chicken. That's what Rickard Ignell had on his mind when he conducted his studies in Ethiopia.

Malaria is a major health issue in Ethiopia, with about 5 million cases and 70,000 deaths a year. Humans and animals share living space in western Ethiopia, where Ignell, a professor at the Swedish University of Agricultural Science, was planning to do his research. But little was known about how mosquitoes interact with various animals. Do certain animals attract the insects? Do other animals repel them?

Ignell set out to investigate in the hope that such knowledge might be useful in preventing mosquitoes from biting humans and spreading malaria. His research group studied Anopheles arabiensis, a major malaria-carrying species of mosquitoes in sub-Saharan Africa.

For the most part, Ignell's group found no pattern. Sometimes the mosquitoes bit goats; sometimes they bit sheep. In fact, they bit most animals — with one exception: chickens.

In their field work in three Ethiopian villages, the group trapped 1,172 Anopheles arabiensis that had recently had a blood meal. Only one appeared to have bitten a chicken.

It wasn't just that the mosquitoes didn't bite chickens. They appeared to avoid them as well. As part of the experiment, 6,706 people volunteered to sleep with a mosquito trap in their quarters. In a number of the homes, the research team placed a chicken in a cage by the bed. When the team counted the number of mosquitoes in the traps, Ignell says they found that "a caged chicken sleeping with you can actually reduce the number of mosquitoes in the house."

"This is pretty cool," says Conor McMeniman, a professor at the Johns Hopkins Malaria Research Institute who was not involved with the project. He thinks the study hints at how we might ward off malaria-carrying mosquitoes that seek out human scent.

Indeed, that's what Ignell's team tried to do. After the chicken discovery, Ignell's team collected fur, wool and feathers from household animals. They extracted chemical compounds that were responsible for the odors of cattle, sheep, goats and chickens. The team then isolated four compounds specified to chickens, so they could generate pure chicken odor. Thousands of human volunteers in the Ethiopian villages were solicited to act as mosquito bait. They lay in bedrooms filled with devices that emitted the odors of cattle, sheep, goats or chickens.

The study, says McMeniman, is one of the first to investigate the effects of inoffensive odors on mosquitoes. "It might be a little bit of stretch to think that chickens will save us from being bitten [but] this study shows potential reduction in attraction," says McMeniman.

And it's not just the scent of a chicken that does the trick. Ignell's team found that some of the chemical compounds responsible for the pure chicken odor are also present in citrus peels and Mexican marigolds. Since chicken-odor dispensers are not on the market, Ignell notes that growing the marigolds or burning the peels could help.

But not every mosquito is turned off by chickens. For example, southern house mosquitoes, prevalent in the southern United States, feed on mammals and birds. So the ultimate goal for researchers, McMeniman says, is "to determine [if the] presence of particular [odors] actually prevent mosquitoes from landing and biting on humans" — not whether mosquitoes dislike the smell of chicken.