Accessibility links
What Does It Mean To Be A 'Feminist' In Your Country? Share Your Thoughts : Goats and Soda How do the belief systems, cultural traditions and ideas shape your view of how a woman should exercise her rights? Tell us with the hashtag #FeminismInMyCountry. 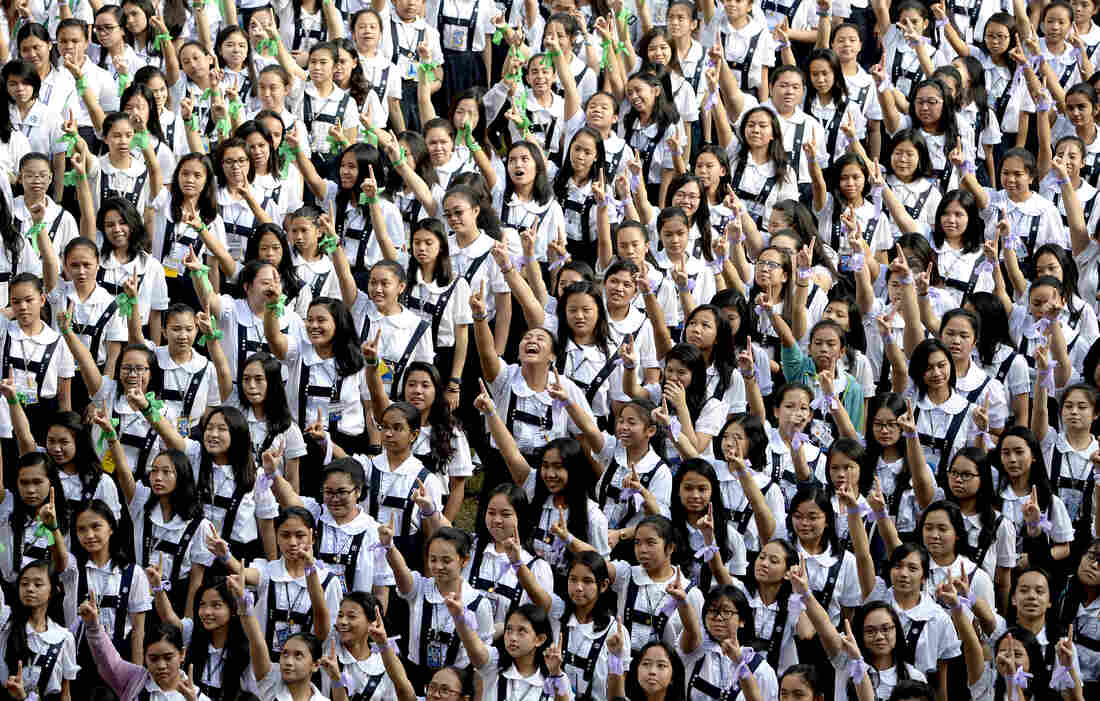 Students at St. Scholastica's College in the Philippines gesture the "No. 1" sign in a campaign to end discrimination and violence against women and girls. NOEL CELIS/AFP/Getty Images hide caption 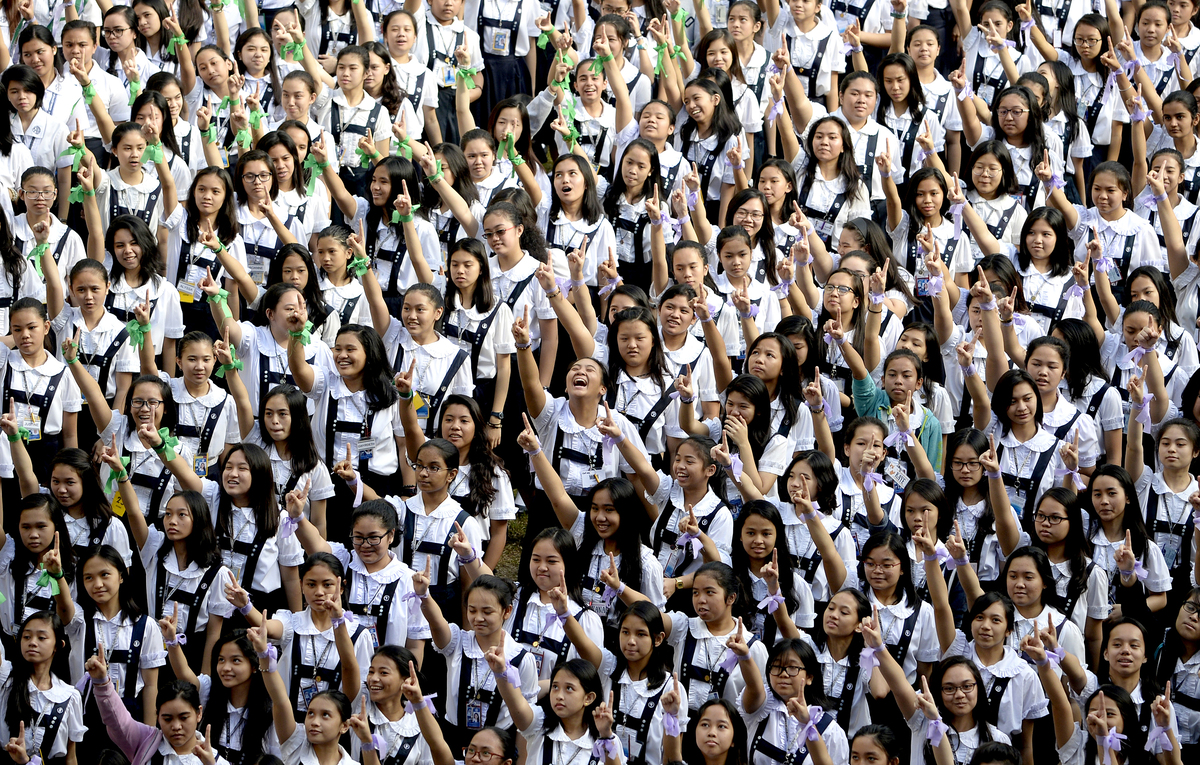 Students at St. Scholastica's College in the Philippines gesture the "No. 1" sign in a campaign to end discrimination and violence against women and girls.

In Rwanda, some consider feminism a dirty word, says NPR's Gregory Warner in his Invisibilia podcast. It's shorthand for too aggressive, too liberated, too selfish. Yet women in Rwanda hold 64 percent of the seats in parliament — more than any other country.

Invisibilia: No One Thought This All-Woman's Debate Team Could Crush It

What he found is that even in a country that seemingly embraces gender equality, there are invisible forces — belief systems and cultural traditions — that may shape society's view of how a woman should behave, what it means to exercise her rights and how far she should push her boundaries.

That made us curious: What does it mean to be a feminist in different countries around the world? And what are the "invisible forces" in your country that influence the definition of feminism?

To get the conversation started, we asked a few folks from our global audience to express their views. Some declined to respond because they didn't consider themselves a "feminist." Here are some of the comments we received, edited for length and clarity.

Zambia: "Being a girl was not a reason to fail"

Being a feminist to me is recognizing that though we have equal rights, there are certain circumstances when as a woman I will need to work harder for the same pay or recognition as a man.

My mother was a professor in education policy and gender studies and taught me the positive aspects of our culture that foster self-confidence. When I was growing up, the bar was set very high for achieving success. Being a girl was not a reason to fail.

Paraguay: "Both men and women need to work to advance it"

When Paraguayans think of feminism, I think they think of outspoken, independent and even rebellious women. But for me, feminism is about the equality of the genders. I think both men and women need to work to advance it.

Social attitudes are hard to change due to the strong influence of the national and regional culture of "machismo." Men have been typically seen as the breadwinners, while women have been seen as homemakers, solely in charge of raising children and teaching them manners. In recent years, economic growth and democracy in Paraguay have helped things move along.

India: "For me, it's about dignity for both sexes"

Feminists in India are often seen as being arrogant, aggressive and offensive. Feminism, generally, is a negative concept and is associated with radical views. But to me it's about dignity for both sexes, not about establishing superiority over one another. It's not about asking for special treatment, but equal treatment.

Growing up, I experienced how Indian society discriminates between girl and boy children. It's reflected in the number of girls allowed to be born and sent to school, and what is expected of them in domestic work. Economic changes are sweeping this country today, but social changes are not keeping pace. For example, with the Delhi rape case, it was disheartening to see that "blame the victim" culture prevails. Political leaders were saying "boys will be boys." We need to change patriarchal mindsets and attitudes at all levels.

The Philippines: "Feminism is a way to discard the machismo values instilled by the colonizers"

I grew up surrounded by strong women: my grandma and my aunts. I also attended an all-girls Catholic school and a university renowned for its activism. We were always made to think that our opinions mattered, that we mattered. I was encouraged to embrace my femininity, seeing it not as a weakness, but a strength.

The Philippines is a patriarchal, machismo society — but the family is where the matriarch rules. The trend of [Filipino] women leaving their families to work abroad as nurses, caregivers and nannies disrupted the family system. That was a big eye-opener for a lot of Filipinos: The roles are reversed, and the women are the sole providers for the family.

This shift back toward a matriarchal society has roots [in the Philippines] before the Spanish colonization. In my eyes, feminism is a way to discard the machismo values instilled by the colonizers.

Trinidad and Tobago: "Women are valued for all the differences we bring to the table"

We recently had our first woman prime minister. I never heard her qualifications questioned on the basis of her gender. For as conservative as the country can be, there is a lot of freedom and power ascribed to women.

Feminism to me means not making "male" the default in career or in power. It means women are valued for all the differences we bring to the table — and valued equally to men.