Accessibility links
Photo Of Omran Daqneesh, The Boy In Aleppo, Syria: Will It Help End The War? : Goats and Soda The photo of the rescued boy in Syria has inspired sympathy, outrage — and donations. But will it be forgotten tomorrow? 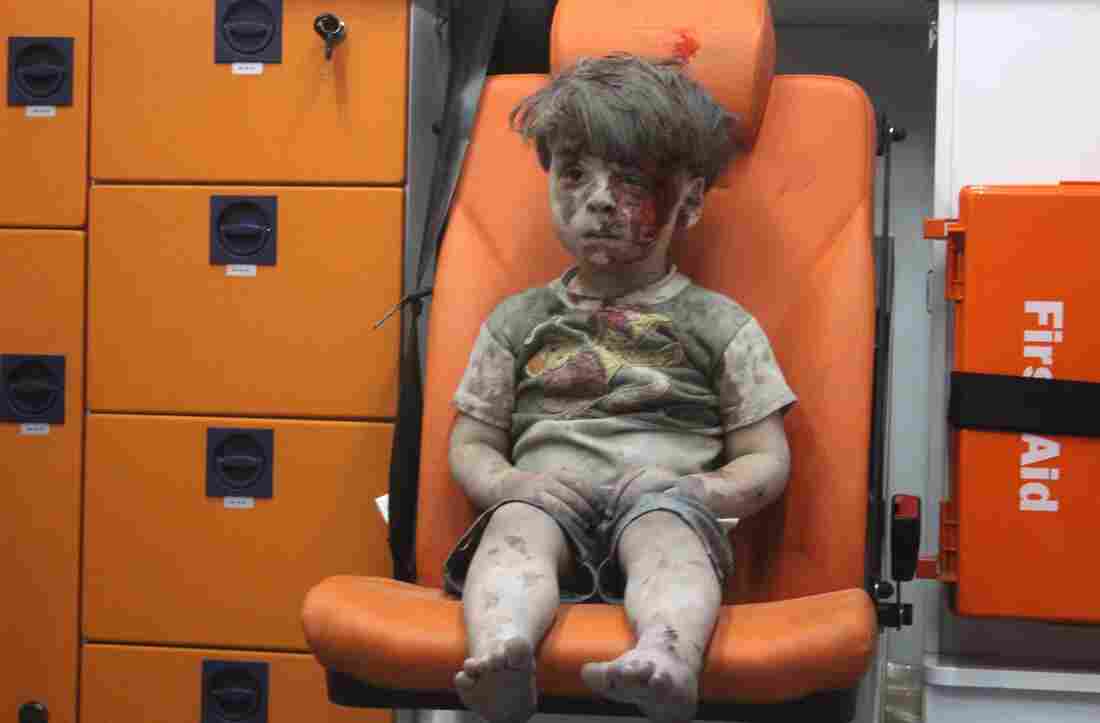 A 5-year-old boy, identified in news reports as Omran Daqneesh, sits in an ambulance Wednesday after reportedly being pulled out of a building hit by an airstrike in Aleppo, Syria. Mahmoud Raslan/Anadolu Agency/Getty Images hide caption 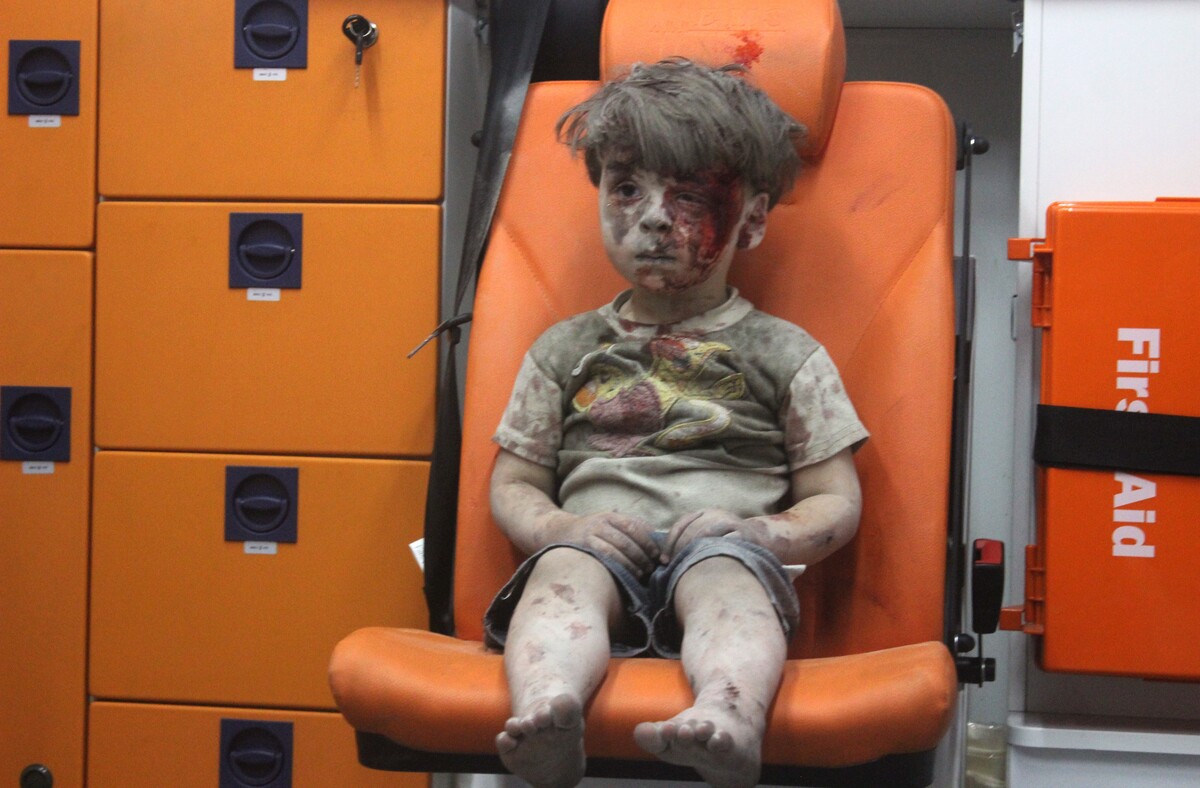 A 5-year-old boy, identified in news reports as Omran Daqneesh, sits in an ambulance Wednesday after reportedly being pulled out of a building hit by an airstrike in Aleppo, Syria.

Can one photo help end a war?

That's what people are wondering about the image of a little Syrian boy covered head to toe in a thick layer of dust, his face bloodied, as he sits in a bright orange chair.

His name is Omran Daqneesh and he's 5. On Wednesday, he was rescued from a building in Aleppo hit by an air strike. His bare feet dangling over the edge of his seat, he looks stunned and dazed.

The image was pulled from a YouTube video posted by the Aleppo Media Center and published in news reports that same day. Since then it has made global headlines — bringing new attention to the ongoing agonies of the Syrian conflict.

There's no disputing the power of the photo. "It's heartbreaking, compelling, beautifully composed, scary," says MaryAnne Golon, director of photography of The Washington Post. "Any mother in the world would want to scoop him up and take care of him."

It seems as if many others feel the same way. The video has already been viewed 3.4 million times and has taken on a life of its own. In just 48 hours, Daqneesh's image turned into a social media meme, inspired a cartoon illustrating the tough choices that Syrian children face, and was used to express outrage against the Syrian war.

But the world has seen an image like this before — of Alan Kurdi, a 3-year-old Syrian boy who drowned while fleeing to Greece with his family. His lifeless body was photographed on a Turkish beach in September 2015.

The reaction to Kurdi's image gives some indications of what a photo can do. It galvanized Europeans to urge their governments to open their doors to more refugees, as reported by the BBC, and sparked an outpouring of global giving.

Mercy Corps, an international group that provides humanitarian aid to Syrians, saw $2.3 million in donations in the month after Kurdi's image was first shared, says communications officer Christy Delafield. By comparison, the group raised $4.5 million in the prior four years.

Similar increases were reported by groups like World Vision, UNHCR and Islamic Relief, according to Deutsche Welle, a German broadcasting company.

Unfortunately, Delafield is not seeing the same reaction with Daqneesh's photo. "I'm not sure if it's because of the Olympics or the election, but it seems like the news cycle has moved on quickly," she says.

While Mercy Corps received $50,000 in the first 24 hours after the image was published, Delafield is disappointed that the number has "trickled off" since yesterday.

Greg Ramm, vice president for humanitarian response at Save the Children, thinks the photo has made a difference in other ways: "It's reminded the world of the suffering inside Syria. It has motivated people to help. And it does put pressure on politicians."

Earlier today, for example, political leaders in Scotland called on leaders in the U.K. and the European Union to demand a Russian ceasefire in Aleppo. "I was horrified to see this photo, which lays bare the reality and human cost of the war in Syria," said First Minister Nicola Sturgeon of Scotland, according to The National, a Scottish newspaper.

A Viral Syrian Moment: Will It Be Different This Time?

But Ed Kashi, an American photojournalist who documents social and political issues, is doubtful of the photo's long-term impact. "Maybe it will inspire people to contribute money or be concerned for a day or a week, but ultimately, it's not going to move the needle in any real way," he says.

In the age of viral photos and memes on Instagram, Twitter and Facebook, he says: "The intensity and graphicness of the images that we see now are numbing. We see it every week. Yet we just scroll forward."

The lack of action "makes me want to cry," he adds.

"Images on their own can provoke feelings and awareness, but they can't give you the sort of political understanding and analysis that you need to respond properly," he says.

Hilary says it's tough for the public to translate what they're seeing into real solutions.

"It's very unclear to people as to which strings they can pull to make a difference," he says. "That's the most profound difficulty of this image. There isn't an obvious mechanism through which we can turn our anger and compassion into change."