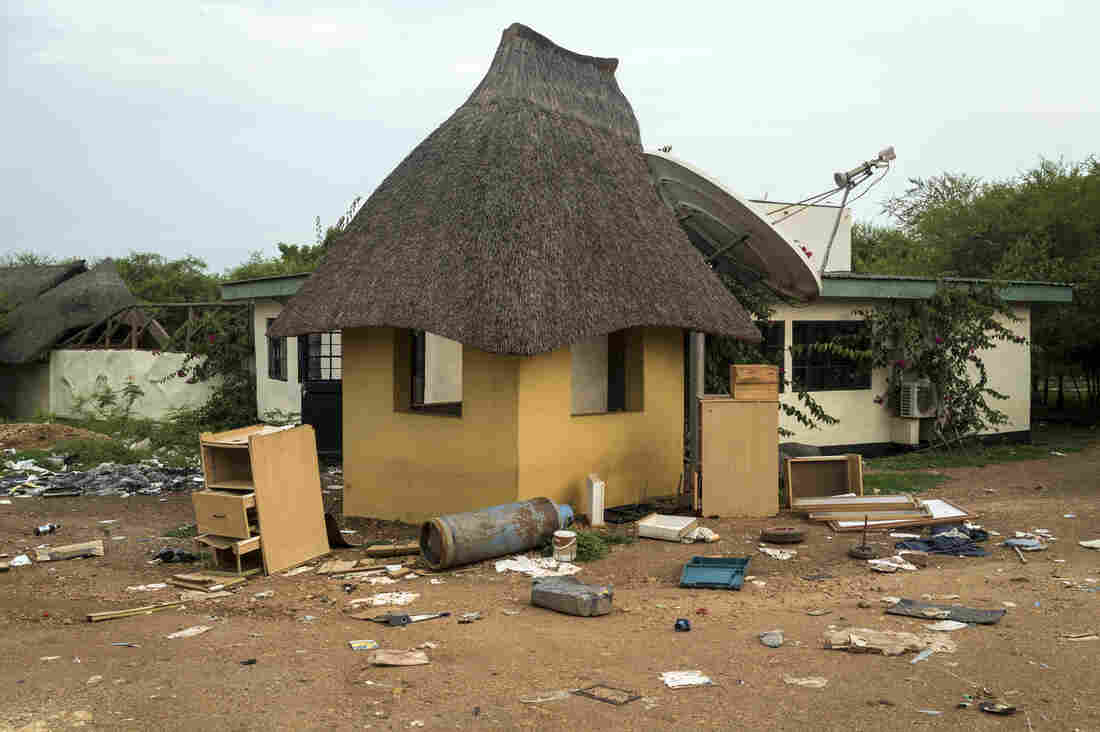 The Terrain Hotel compound was ransacked by South Sudanese troops, who went on to attack foreign aid workers holed up there. Adriane Ohanesian/AP hide caption 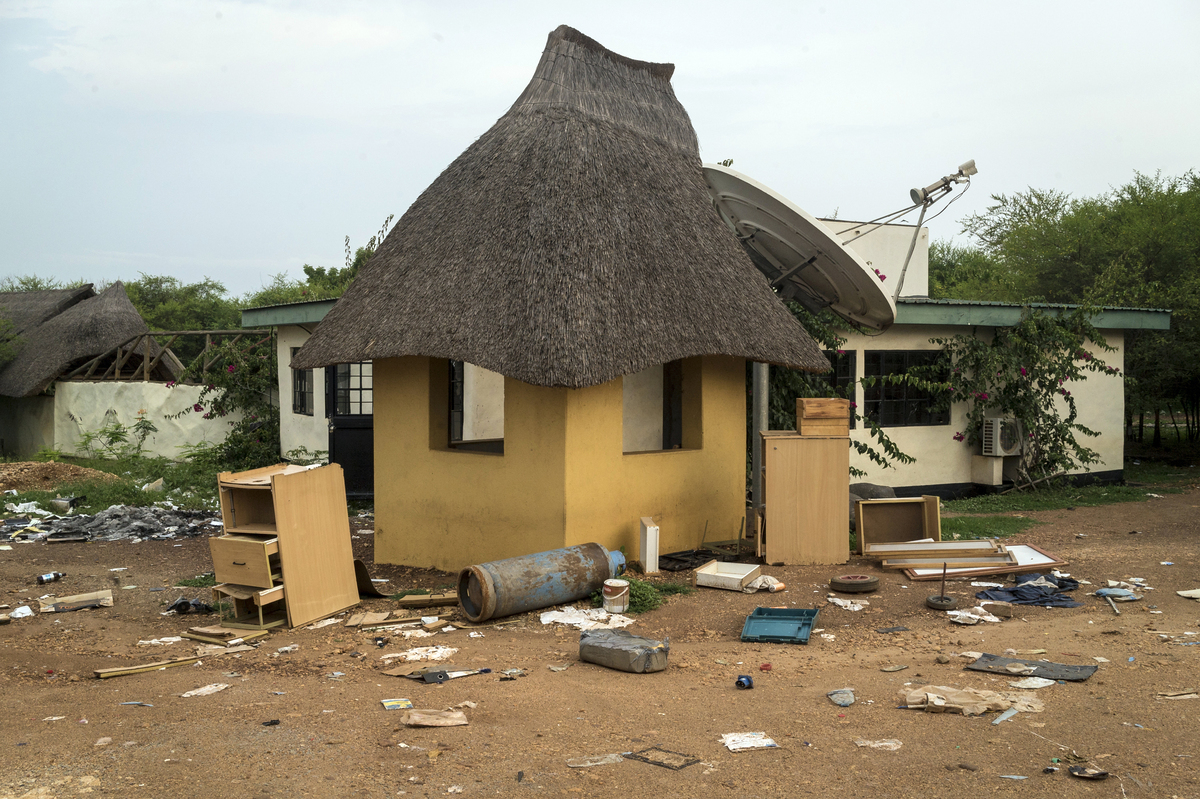 The Terrain Hotel compound was ransacked by South Sudanese troops, who went on to attack foreign aid workers holed up there.

On July 11, South Sudanese soldiers invaded the Terrain hotel in the capital city of Juba and gang-raped foreign aid workers.

"The soldiers just came to the bathroom where all the girls were hiding and they just picked us out of the bathroom one by one," says one of the women who was in the hotel. She asked that her name not be used.

Despite calls for help to the U.N. compound a mile down the road, no one came.

And now the U.N. has issued a report that addresses the attack — and takes action. On November 2, U.N. Secretary General Ban Ki-moon announced that he has fired the head of the peacekeeping mission in South Sudan over the failure of U.N. troops to protect civilians and U.N. staff during violence in Juba in July.

A new report from a special investigator set up by Ban's office found serious shortcomings with the response of the peacekeeping mission when fighting broke out in the South Sudanese capital between government troops and soldiers loyal to opposition leader Riek Machar.

The report states that despite calls for assistance at the hotel, the U.N. peacekeeping troops didn't intervene as South Sudanese government troops raped, killed and tortured civilians, including U.N. staffers.

The special investigator also notes that peacekeepers failed to protect South Sudanese civilians who'd taken shelter at a so-called "protection of civilian" [POC] site on the U.N.'s main base. At least 20 residents of the POC were killed and 185 buildings on the U.N. base were hit with rocket and gunfire. The peacekeepers also failed to protect U.N. assets including a World Food Program warehouse from looting.

Ban's office today announced that Kenyan General Johnson Mogoa Kimani Ondieki is being relieved of duty as the top military officer for the United Nations Mission in South Sudan (UNMISS). Ondieki had been appointed to the position in May.

According to the Associated Press, Kenya has announced that it will pull its troops out of South Sudan in protest of Ondieki's firing.

The violence in July — and the hotel attack — sent shock waves through the aid community — even in a country where violence is commonplace and a simmering civil war has been reignited.

"Certainly something changed and things happened that we were not used to seeing happen," says Steve McCann, a security and risk assessment specialist. Afterward, some relief agencies have evacuated staff, and others have scaled back their operations.

The incident happened amid a whirlwind of fighting that erupted in Juba last month between government troops loyal to President Salva Kiir and soldiers aligned with former Vice President Riek Machar. Machar and his soldiers had recently come back from exile as part of a peace process to end a conflict that began in 2013.

When the fighting began on July 8 in the dusty dirt streets of Juba, foreign aid workers hunkered down in their compounds. The violence raged for four days and left more than 300 people dead, including refugees inside a United Nations compound and two Chinese peacekeepers. Thousands of people fled their homes.

On the southwestern edge of the capital, more than two dozen aid workers took shelter inside the grounds of the Terrain Hotel. The hotel, less than a mile from a large United Nations peacekeeping base, is popular with foreigners. During the fighting most of the foreign aid workers who sought shelter there were from the United States, Australia and the Philippines.

"There were intermittent highs and lows in the fighting," says the American woman who spoke to NPR. "There was a lot of military activity on the road outside of our compound. We were told [by our head office] that they were trying to evacuate us but there were too many checkpoints along the road. That it wasn't safe and that we just need to just sit there and wait."

On the fourth day of the fighting dozens of South Sudanese troops broke through the gate into the hotel grounds.

A group of about 30 foreign aid workers and a South Sudanese editor who was working for a USAID-funded project barricaded themselves in the second story of a block of apartments at the hotel. The block had been built as a "safe house" with metal gates on the balconies and steel reinforced doors.

For several hours the soldiers pillaged the hotel, ripping out appliances, ransacking rooms and even carting off the generator. The holed-up humanitarians frantically called the U.N., the U.S. Embassy and private security firms to send help.

But help did not arrive. At a U.N. base just up the road, armed peacekeepers with armored vehicles couldn't get authorization to leave their base and go to the hotel. The U.S. Embassy didn't have the resources to dispatch a rescue team. Private security companies also said the streets were too dangerous to reach the Terrain Hotel.

"The soldiers were trying to break down the door and then they started shooting through the door," says the American woman. One bullet hit a Vermont-based contractor in the leg.

Once they got in, the predominantly Dinka government soldiers shot and killed John Gatluak, a South Sudanese journalist. Gatluak, who was from the Nuer ethnic group, was working for Internews, a USAID-funded project to teach media skills to local journalists.

Then the soldiers grabbed the women who were hiding in the bathroom.

She collapsed on the floor in a fetal position, clutching her knees to her chest and refusing to move.

"He kept hitting me with an AK-47, yelling at me to open my legs," the American woman says. She says the soldier kept screaming at her, "'Open your legs. I'm going to kill you if you don't open your legs.'"

Eventually, she says, another soldier who appeared to be a commander ordered the soldier to stop. She says she was not raped. But at least five women were. One told the Associated Press that 15 men assaulted her for hours.

Hours after the attack on the hotel began, most of the aid workers were finally taken out of there by security forces aligned with the same government troops that had attacked them. Three of the Western women weren't rescued until the next morning.

McCann, the security specialist, says South Sudan has been a dangerous place for years. His company, Safer Edge, trains international relief groups in conflict zones around the world.

In the past McCann didn't expect that foreign aid workers in South Sudan would be directly and personally attacked.

"No," he says. "We didn't feel that international staff were the targets. No."

There are places in the world where international aid workers simply can't operate — parts of Syria, Libya, Yemen and Somalia, for instance. Before the Terrain Hotel attack, South Sudan wasn't one of those no-go zones. And McCann cautions that this incident won't cause all aid agencies to pull their foreigners out of the country. But the growing insecurity will force groups to reassess their operations and be far more cautious in South Sudan.

Julien Schopp with Interaction, an umbrella group for development and relief agencies based in Washington, says this incident was the culmination of two years of growing insecurity for aid workers in South Sudan.

"If you look at the latest aid worker security report, for the first time South Sudan is the most insecure location in the world, overtaking Afghanistan and Somalia, where we expect more violence," Schopp says.

The insecurity for aid agencies in South Sudan comes at the same time the need for international relief is growing rapidly. There's a cholera outbreak, malaria is on the rise, 2 1/2 million people have been driven from their homes and millions more are dependent on international food rations. During the eruption of violence in July, even those food rations weren't safe. An entire warehouse for the U.N. World Food Programme in Juba was ransacked.