Accessibility links
Nigeria Is The Number One Scrabble Nation In The World : Goats and Soda Wellington Jighere of Nigeria was crowned world champ last year. He's one of many Nigerians who excel at the game. What's their secret? 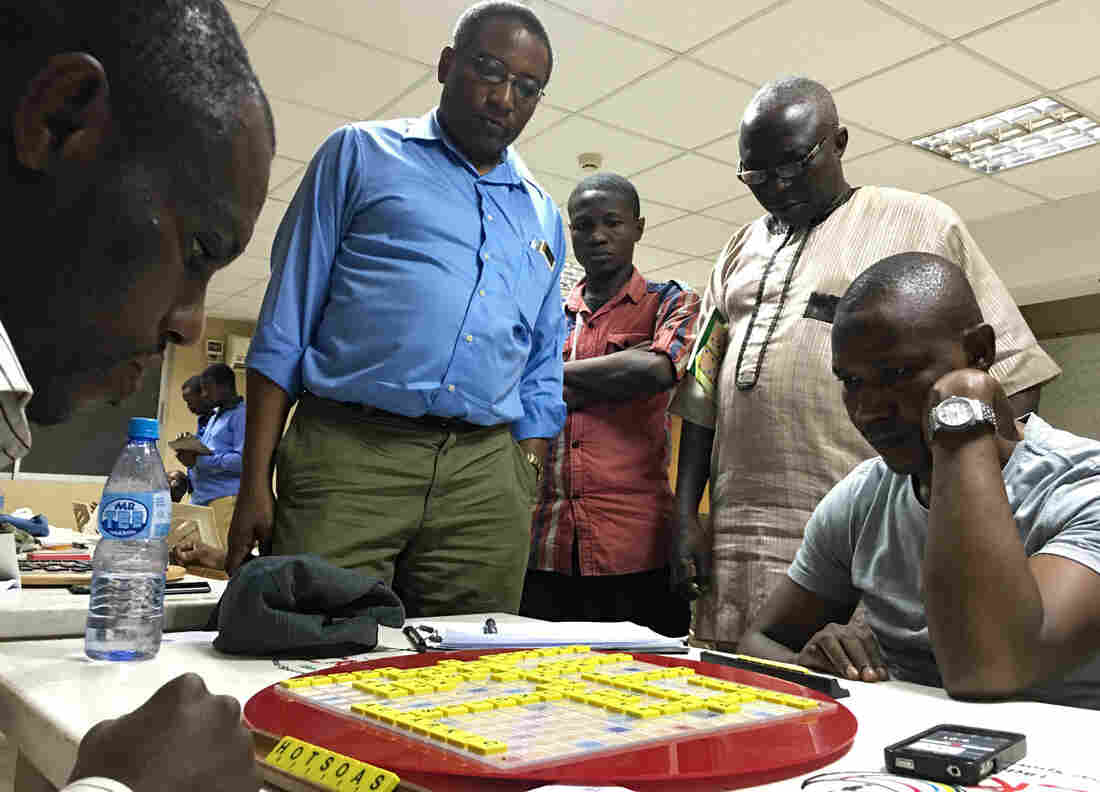 World Scrabble champion Wellington Jighere, 33, (right) is one of Nigeria's many masters. His strategy: "When you are expecting me to do the traditional thing, I will just choose to do something that is uncharacteristic." Ofeibea Quist-Arcton/NPR hide caption 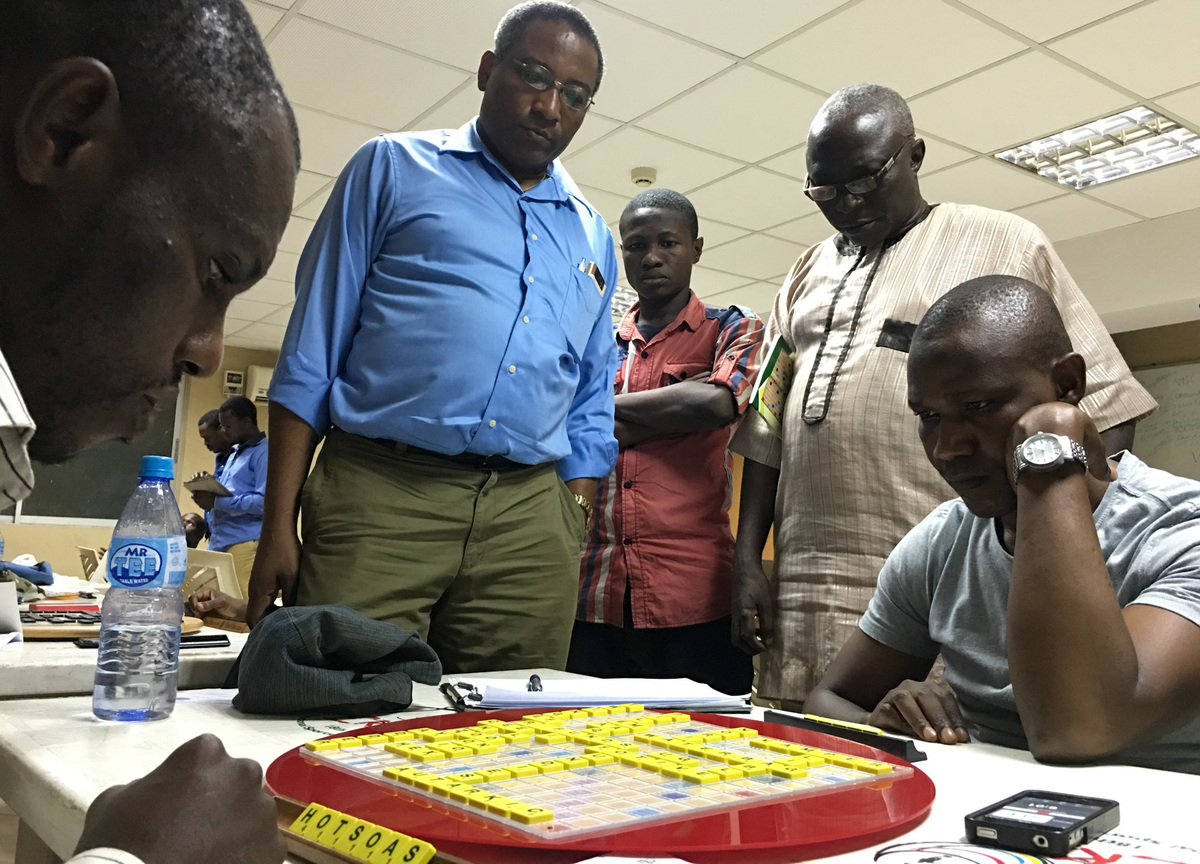 World Scrabble champion Wellington Jighere, 33, (right) is one of Nigeria's many masters. His strategy: "When you are expecting me to do the traditional thing, I will just choose to do something that is uncharacteristic."

Nigeria is the English-speaking world's Scrabble superpower. Africa's most populous nation is home not only to the global Scrabble champion, but team Nigeria ranks as the world's top Scrabble playing nation — ahead of the U.S. in second place.

The Scrabble world champion is Wellington Jighere. He's 33, has a soft voice, a slow smile and a penchant for fedoras, earning him the nickname "the Cat in the Hat." Jighere acknowledges that he's taciturn by nature, but also has an explosive, infectious laugh, though he considers Scrabble serious business.

"You can't afford to waste too much energy doing unnecessary chatter," he says. "During a tournament, I see it as business time. And that is no time to be joking around." Jighere plays chess to relax, "and for fun," he says.

Jet-lagged and weary, Jighere was crowned the world Scrabble champ last year in a grueling 32-round competition in Australia. Up to 30 of the top 100 global players are from Nigeria, which has the highest percentage of any country in the top 200. The Nigerians' apparent collective strategy — short words that rack up the points.

Nigerians have been credited with perfecting that tactic under the tutorship of senior team coach, Prince Anthony Ikolo. He says Nigerians are passionate about Scrabble and the short word method gives them an edge. Many put Nigeria's towering Scrabble prowess down to its players' ability to "choke the board" as they say, with this defensive play.

The coach says "the short words help you to be defensive [by blocking longer words from opponents], but when it's time to be offensive, we know those long words also. Nigeria is a force to be reckoned with when it comes to Scrabble," says Ikolo.

Ikolo, who's also a university mathematician, came up with lists of five-letter words and distributed them to his players, including Jighere, the world champion, to train them how to block the board. The coach says that armed with these, the Nigerians could take on and beat competitors playing seven-, eight- or even nine-letter words.

The other strategy was to gather his players at a hotel before the tournament and have them play two days of nonstop Scrabble. It appears to have worked.

Jighere though says his personal strategy is to have "no strategy at all."

"I play a fluid kind of game. Yah. I really don't have a particular kind of style that you can pin me to," he says. "So, when you are expecting me to do the traditional thing, I will just choose to do something that is uncharacteristic. It's what sets me apart from everyone else."

Jighere should know. He and team Nigeria triumphed at the World English-Language Scrabble Players Association world championship in Australia in November 2015. They fully intend to hang on to that success when they defend those titles next year in Kenya, he says.

Nigeria's president, Muhammadu Buhari, phoned Australia to congratulate him, says Jighere with a big smile. "It felt so warm to have him speak with me right then and there. It was a very, very important experience. He told me how proud he is of my accomplishment and how proud I have made the nation as a whole, not just the nation but Africa as a whole. And that it has really gone to prove that we are truly the giants of Africa."

Jighere bested a Briton in Perth, while Team Nigeria dethroned the U.S., which had been at the pinnacle for about decade, with Nigeria yapping at its heels, determined to topple the Americans.

"We are currently ranked No. 1 nation in the world for Scrabble," says the champ. "In the world we have the highest number of persons in the top 100 rated Scrabble players. We have as many as 20 to 30 tough masters in Nigeria that can really give you a tough fight any time, any day."

Ikolo, the coach, will attest to that. Jighere's friends and fellow Scrabble masters cut him no slack, in the jovial, noisy and garrulous atmosphere during the Lagos tournament.

Ikolo gleefully told NPR that, until the Nigeria National Scrabble Players competition, in the main city Lagos at the tail end of July, Jighere had failed to win any significant tournament after his success in Australia last year.

"Since he became the world champion, he has been beaten blue and black by his colleagues," Ikolo said. "It tells you how strong Nigeria's Scrabble is. It tells you that the Scrabble scene we have here is a very tough one. It's highly competitive and nobody can boast tomorrow that I'm going to win this, I'm going to win that when it comes to Nigerian Scrabble playing."

So why Scrabble? "Ah, I didn't exactly choose Scrabble," says Jighere. "I ran into some friends who were tournament players and I beat them. They told me 'Ah, if I could do this well against them, that means I should come to the next tournament.' " He adds, "And I was like, "Ah, you mean they play this in tournaments? OK, let's go. And the rest, as they say, is history." And he laughs.

That was in 2002. Today, Jighere sits atop the global Scrabble tournament ladder. He describes how he had to overcome fatigue and jet lag to win in Australia. Learn those words, commit them to memory and stay cool — and awake.

Scrabble was given official recognition as a sport in Nigeria in the 1990s. But local players, coaches, parents, officials and tournament organizers say government assistance has been patchy and more must be done to support, sponsor and finance Scrabble.

The Lagos State government provided the venue — Teslim Balogun stadium for indoor sports — for the recent tournament, as well as organizing some logistics. 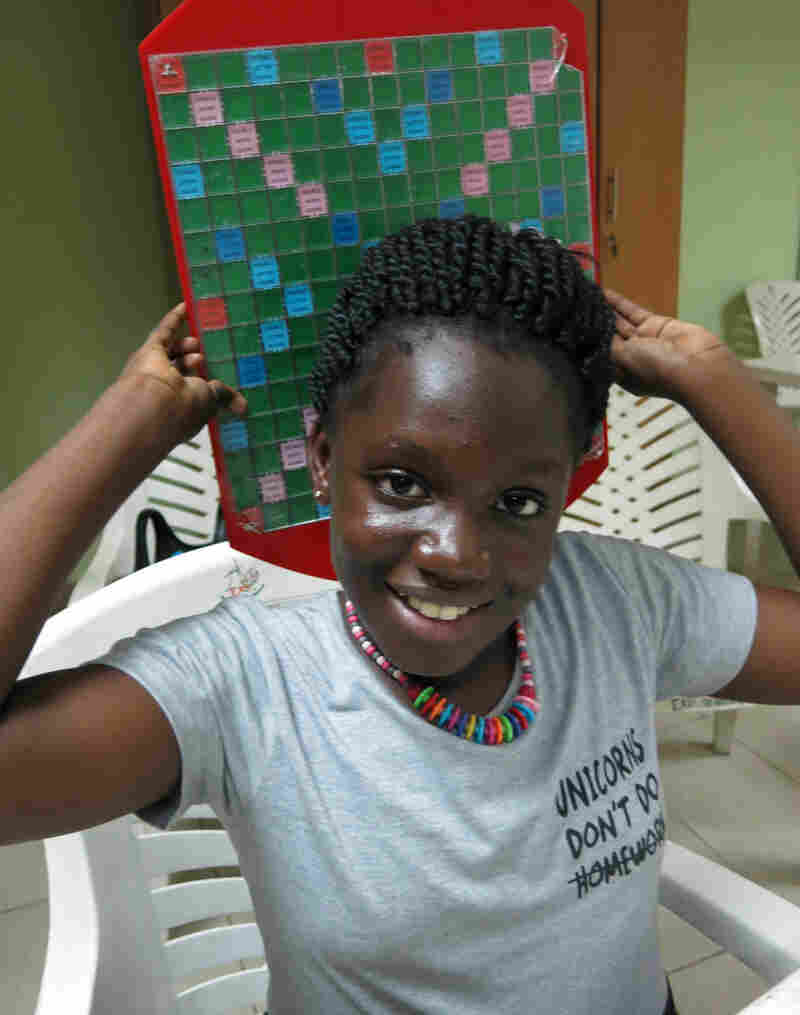 Angela "I'm not very shy!" Osaigbovo, 10, of Nigeria came in second in a recent youth tournament and triumphed at Scrabble camp in August. She'd hoped to win the MSI World Youth Scrabble Championship in Lille, France, this weekend, but was denied a French visa. Ofeibea Quist-Arcton/NPR hide caption 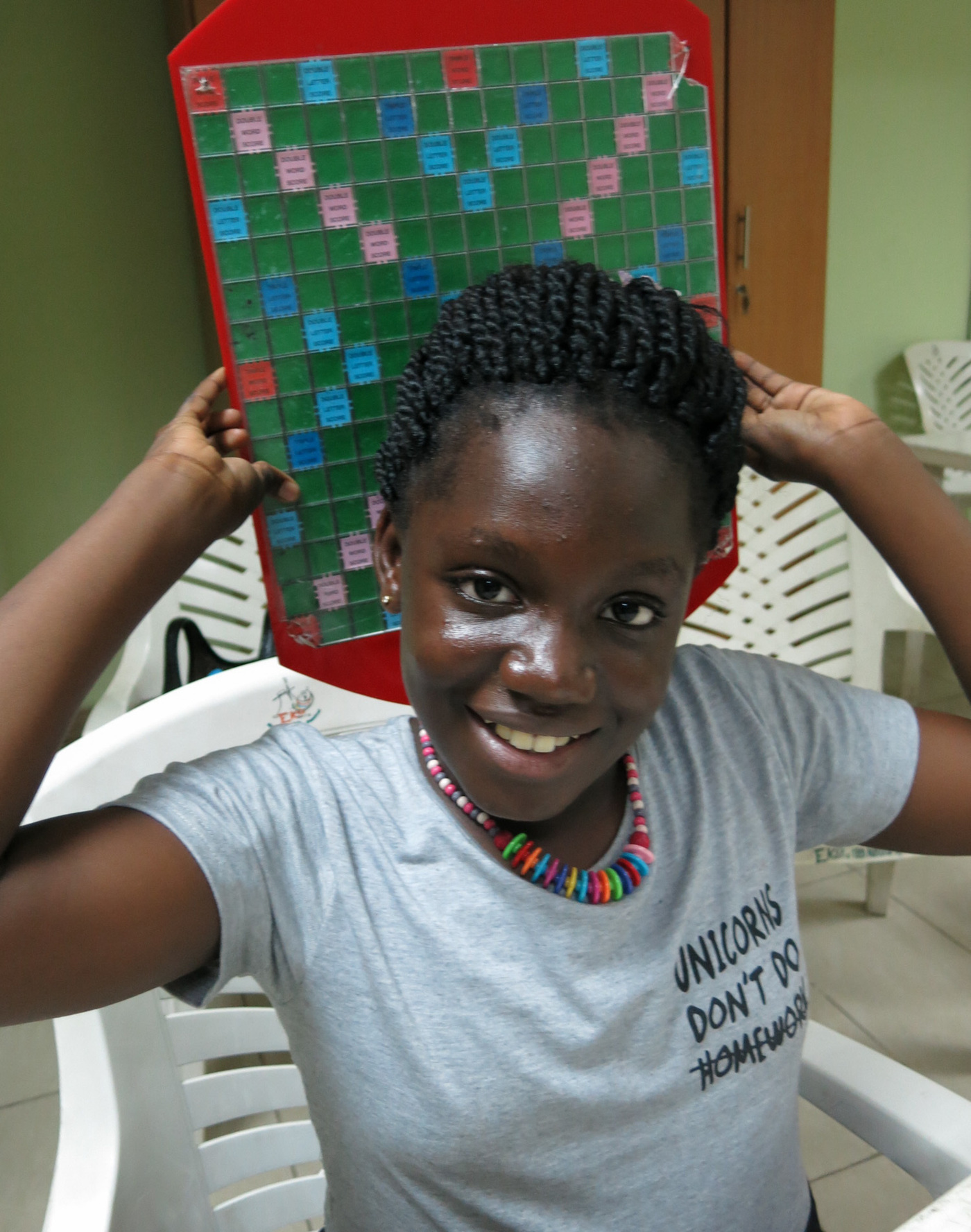 Angela "I'm not very shy!" Osaigbovo, 10, of Nigeria came in second in a recent youth tournament and triumphed at Scrabble camp in August. She'd hoped to win the MSI World Youth Scrabble Championship in Lille, France, this weekend, but was denied a French visa.

But senior team coach Ikolo says while cash prizes are welcome, the authorities — and corporate sponsors — should do more to capitalize on Nigeria's global success at Scrabble. "We don't value that Nigeria is ranked the best Scrabble playing nation in the world," says Ikolo, "and we have the world Scrabble champion, Wellington Jighere."

And yet Scrabble has caught on in Nigeria in a big way, among veterans and youth. There are scores of clubs up and down the 36 states of a nation of 180 million people. Daylong and weekend tournaments are held regularly and young players, like 10-year-old Angela Osaigbovo, are champions in their own right.

She's been playing Scrabble since she was 5 and began competing at age 6. "Scrabble for me is a fun way of using my academics, to help me in my hobbies and afterschool life," Angela says with a big smile. Thrusting her Scrabble board into the air, she then shakes her bag of tiles and tells me, "I'm good in math and literacy. And I think it's due to Scrabble."

As a scrabbler, she likes using "premiums, or bingos, which are seven-letter words — such as zaniest, quiting and players."

Relaxed and confident, Angela sits next to Vincent Okere, who's 13. The teen won the local players championship and the trophy in the youth category in Lagos. He spent most of the tournament weekend prowling around the Masters, watching every Scrabble move by the veterans and, no doubt, learning.

But no hard feelings, says Angela, who came in second. She was working hard in the build-up to the youth championship at the Mind Sports International (MSI) global tournament in Lille, France, starting Saturday.

Every other year, MSI organizes a championship for all-comers, while WESPA holds its tournaments the other years.

"Yes, I'm very excited. I'm aiming to win the WYSC, which is World Youth Scrabble Championship" in Lille at the end of August, Angela told me, adding. "I'm not very shy!"

Her mother, Toyin Osaigbovo, is delighted that Angela loves Scrabble and says her daughter possesses what Nigeria has in abundance — focus and determination.

"Nigerians are very determined and dogged people," says Osaigbovo. "And once we set our minds to something, we achieve it."

Angela had this warning for their global competitors: "Watch out, because Nigeria is coming, with force!"

However, Angela's disappointed mother told NPR her daughter was refused a French visa, so won't be able to compete in Lille since the youth championship began Saturday.

The champ, Wellington Jighere, announced yesterday that most Nigerian players who applied had also been denied visas to travel to France. Social media have been twitching with outrage. Now Jighere says they've been told to report to the French Embassy on Monday morning to be issued visas.

So Scrabblers, you're warned, Nigeria's champions are on the warpath!