Accessibility links
Current Outbreak Of Yellow Fever Is A Reminder Of The Disease's Storied History : Goats and Soda An outbreak in Angola and the Democratic Republic of Congo has raised concerns about the infamous and fearsome disease — once a scourge of the U.S., Panama and Spain.

Yellow Fever Timeline: The History Of A Long Misunderstood Disease

Yellow Fever Timeline: The History Of A Long Misunderstood Disease 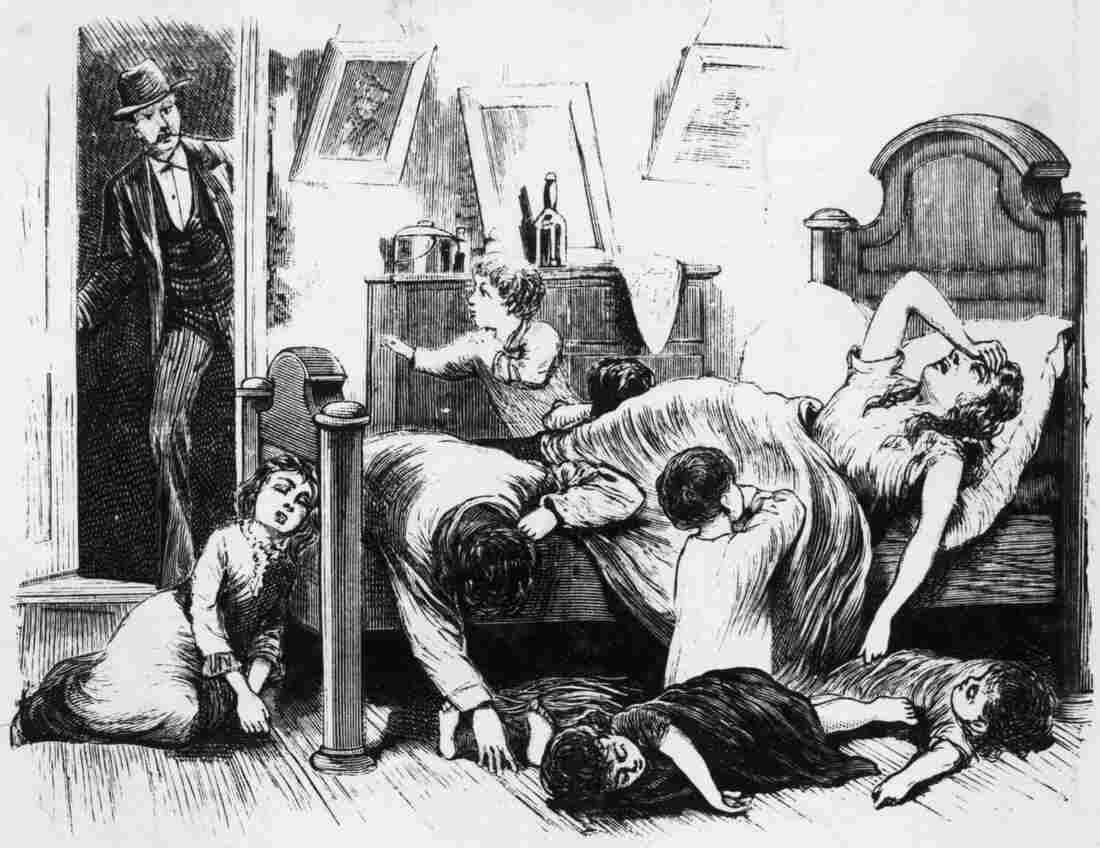 This illustration depicts a yellow fever victim in a Jefferson Street home in Memphis. It's from a series of images entitled "The Great Yellow Fever Scourge — Incidents Of Its Horrors In The Most Fatal District Of The Southern States." Bettmann Archive hide caption 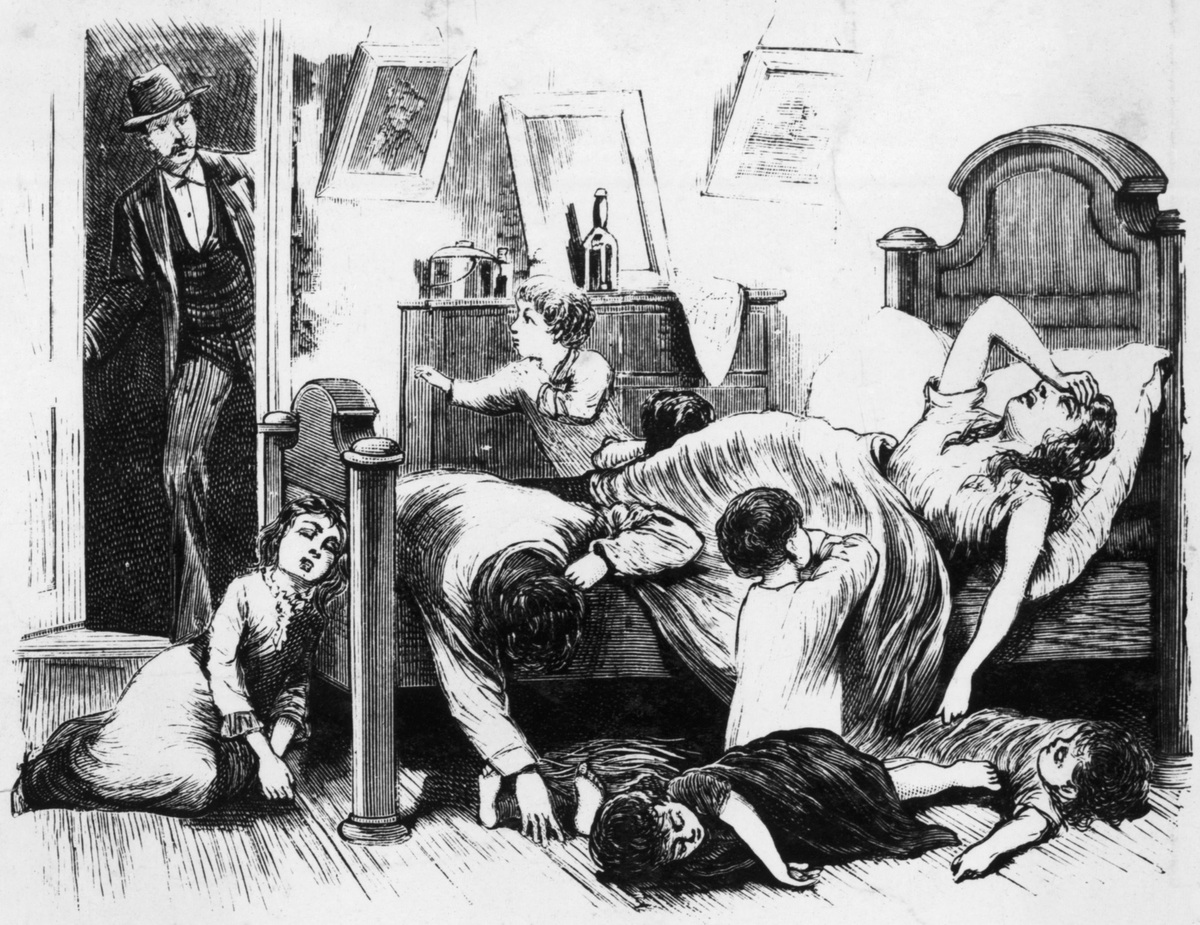 This illustration depicts a yellow fever victim in a Jefferson Street home in Memphis. It's from a series of images entitled "The Great Yellow Fever Scourge — Incidents Of Its Horrors In The Most Fatal District Of The Southern States."

No one knows for sure, but scientists believe that yellow fever has plagued the world for at least 3,000 years. in all likelihood, the disease started in the rain forests of Africa. It rode barges and sailing ships to tropical ports around the world, followed the slave trade to the Americas, interrupted the building of the Panama Canal and left a trail of graves around the world.

The fearsome disease starts like a common flu with symptoms of headache, fever, muscle pain, nausea and vomiting. But roughly 15 percent of patients progress to a severe form of the disease: high fever, jaundice, internal bleeding, seizures, shock, organ failure and death. Up to half of those who develop severe disease will die.

In 2016 the mosquito-borne disease is making headlines once more. An outbreak in Angola has spread to the Democratic Republic of Congo, with 3,867 suspected cases in Angola and 2,269 suspected cases in DRC, according to the World Health Organization, since December 2015. And there's a shortage of the yellow fever vaccine: Only four manufacturers make the vaccine using a time-consuming, labor-intensive production process that cannot keep up with the current need. It's the latest chapter in yellow fever's long and storied history.

The virus almost certainly originated in Africa, passing back and forth between the Aedes aegypti mosquito and monkeys. "Almost without a doubt, for thousands of years the virus circulated in monkeys and mosquitoes in the rain forests of Africa," says Dr. Duane Gubler, founding director of the Signature Research Program in Emerging Infectious Disease at Duke-NUS Medical School in Singapore. "It probably infected people as well but not in large populations because people lived in small villages."

Over thousands of years, the mosquitoes carrying the virus adapted to village life, then city life. They got used to feeding off human beings and made their way to larger cities and coastal towns.

As the shipping industry and global commerce expanded, mosquitoes could hitch rides on barges and sailing vessels to port cities in the tropical world. The slave trade also took off. "Ships had to carry kegs of water. And there were large numbers of African slaves in the hold," says Gubler. Mosquito larva could thrive in the water kegs. And some of the slaves, infected with yellow fever, were bitten by mosquitoes, which then bit uninfected people, spreading the disease. "That's how both the mosquito and the virus got introduced to the Americas," he says.

The first recorded epidemic of yellow fever was in the Yucatan Peninsula in 1648, probably part of a larger epidemic involving a number of Caribbean Islands. Between 1668 and 1699, outbreaks were reported in New York, Boston and Charleston. Northern areas of the U.S. saw summer outbreaks. "The epidemics died out in winter because the tropical mosquito doesn't survive," says Gubler. "But the mosquito moved north with ships taking goods up river. Every year, the mosquito distribution would expand in the spring, then contract in the winter." Doctors didn't suspect a mosquito link and assumed that yellow fever spread through human-to-human contact.

Eventually yellow fever made its way to Europe. In 1730, 2,200 deaths were reported in Cadiz, Spain, followed by outbreaks in French and British seaports. "It spread as far north as Glasgow," Gubler says. But there wasn't as much of a slave trade in Europe, and outbreaks were less frequent than in the Americas. The disease might have arrived in Europe by way of America, not Africa. "The ships from Europe would load up with goods, go to Africa, load up with slaves, go to America, then load up with sugar or sorghum, and take that back to Europe," he says. "There was a triangular route that these ships followed and the virus and the mosquitoes could have been introduced from the Americas rather than Africa.

"It was the scourge of much of the tropics, and it prevented economic development," says Gubler.

Throughout this century public health experts continued to believe yellow fever was transmitted by contact with infected patients. With that misconception, most efforts to control outbreaks were futile. But in 1881 a Cuban physician, Carlos Finlay, acting on a theory that mosquitoes carried the virus, conducted an experiment with mosquitoes that harbored the disease after biting yellow fever patients. He let the mosquitoes bite an experimental subject, who then came down with yellow fever. Still, much of the scientific community remained unconvinced.

Meanwhile, thousands of people were dying every year in New Orleans — a major port for the slave trade and a city with a climate hospitable to the Aedes aegypti mosquito. Between 1839 and 1860, some 26,000 people in New Orleans contracted yellow fever.

By the end of the 19th century, during the brief Spanish-American War, fewer than 1,000 soldiers died in battle, but more than 5,000 died of disease in Cuba, and most of those deaths were due to yellow fever, according to records of the U.S. Army Yellow Fever Commission.

The Yellow Fever Commission was formed by the U.S. military in response to the war-time deaths. Its mission was to study the cause and spread of the yellow fever. Led by Major Walter Reed, working in Cuba, the commission confirmed in 1900 what Dr. Finlay suspected: Yellow fever was transmitted by mosquito bites. To prove it, 30 men, including Spanish immigrants, soldiers and two civilians, volunteered to be deliberately infected with mosquito bites. The commission started mosquito control programs in Cuba using improved sanitation, fumigation with insecticides and reduction in standing water areas where mosquitoes breed. The number of yellow fever cases dropped dramatically.

Those successful efforts in Cuba came just in time to save the Panama Canal building project. By 1906, roughly 85 percent of canal workers had been hospitalized with either malaria or yellow fever. Workers were so terrified of yellow fever that they fled the construction site in droves at the first hint of the disease. Tens of thousands of workers died.

Dr. William Gorgas, who had worked on mosquito eradication in Cuba, convinced President Theodore Roosevelt to grant funding on an eradication effort in Panama. In the summer of 1905, Gorgas, along with 4,000 workers in what he called his "mosquito brigade," spent a year working to stop mosquitoes from laying their eggs. They fumigated private homes with insecticides and sprayed areas of standing water with oil to interrupt mosquito breeding. The efforts cut the number of yellow fever cases in half by September, and in October there were only seven new cases. Finally, on November 11 1906, the last victim of yellow fever on the Panama Canal died. The yellow fever epidemic was over.

After World War II, the world had DDT in its arsenal of mosquito control measures, and mosquito eradication became the primary method of controlling yellow fever.

Then, in the 1940s, the yellow fever vaccine was developed. "It is one of the cheapest, most effective vaccines in the world," says Gubler. The vaccine provides lifetime immunity for 99 percent of people immunized, and by the late 1980s, the World Health Organization made a push to increase vaccine coverage. A few African countries have begun routine childhood immunization against yellow fever, and carried out catch-up campaigns to immunize adults, but vaccine producers have not kept up with the demand, according to WHO.

In the past 30 years, there have been limited outbreaks in Kenya, Nigeria, Liberia, Cameroon, Cote d'Ivoire, and Senegal in Africa; and in the Americas in Peru, Ecuador, Venezuela, Bolivia and Brazil. 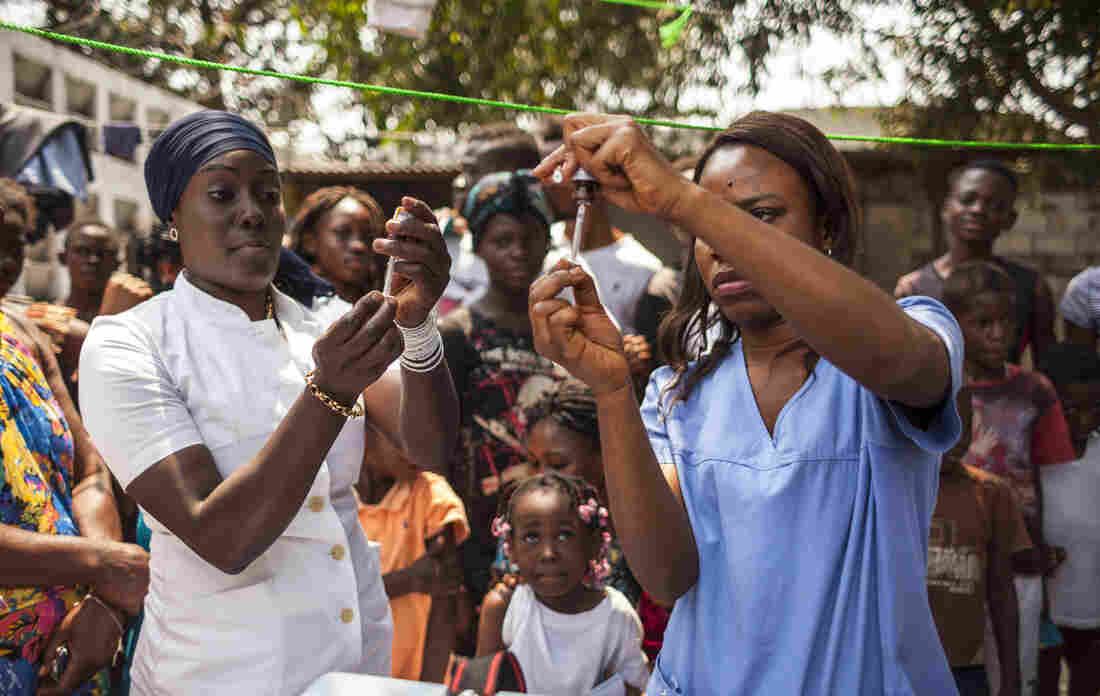 Health workers during the first day of the yellow fever vaccination campaign in Kinshasa, capital of the Democratic Republic of Congo, on August 17. Eduardo Soteras Jalil/World Health Organization hide caption 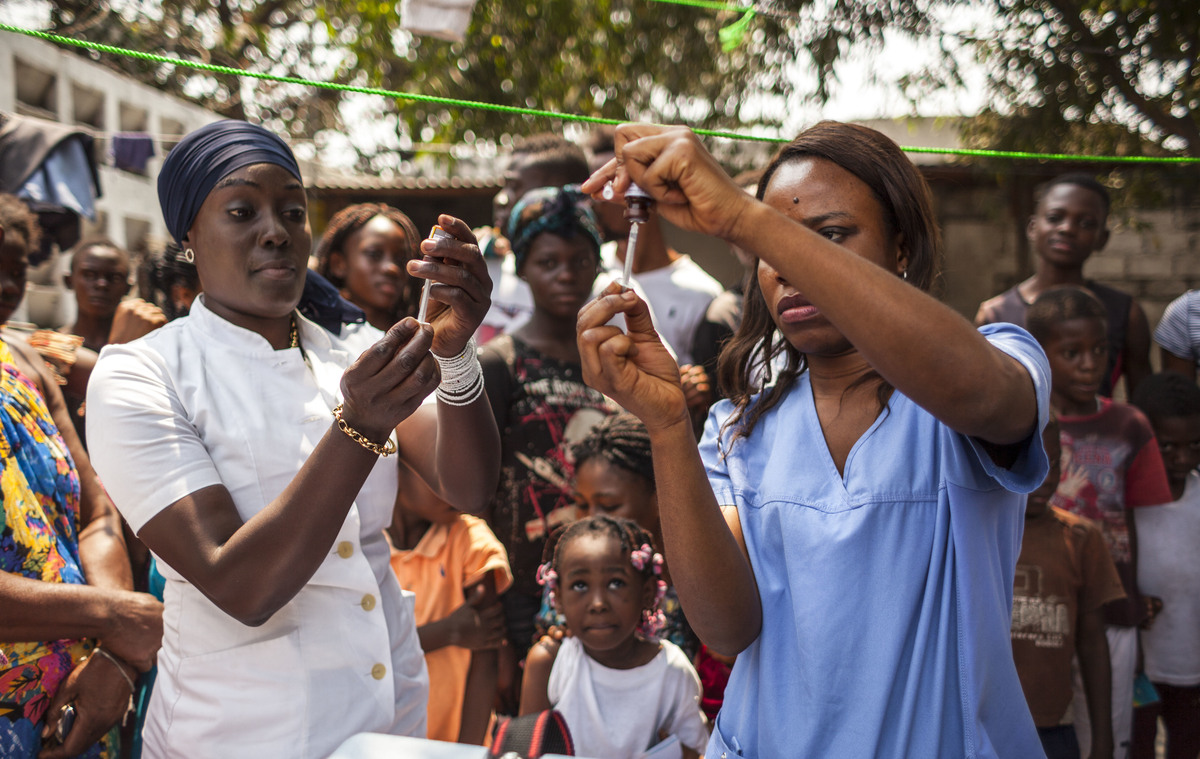 Health workers during the first day of the yellow fever vaccination campaign in Kinshasa, capital of the Democratic Republic of Congo, on August 17.

And now, the world faces a worrisome outbreak in densely-populated cities of Angola and the Democratic Republic of Congo. And there's so little vaccine left that WHO is doing something unprecedented: Stretching the vaccine supply by giving people smaller doses, which will provide immunity for a year rather than lifetime immunity of the full dose.

WHO has already vaccinated more than 16 million people and plans to vaccinate another 13 million.

There's growing concern the virus could spread to Asia, where it has been conspicuously absent.

With millions of people getting on ships and jets, the modern transportation system is even more efficient than the slave ships of 400 years ago at transporting both mosquitoes and virus-infected humans. "Global trends have created the ideal situation for the spread of epidemics," says Gubler.

A previous version of this post referred to Duke University-National University of Singapore, which is incorrect; in fact, the institution is called Duke-NUS Medical School.