Accessibility links
Rape Survivors Use Snapchat To Tell Their Stories To An Indian Journalist : Goats and Soda A journalist wanted to tell the stories of two rape victims while protecting their identities. How would he do it?

How Snapchat Became A Virtual Confessional For Sexual Assault Victims

How Snapchat Became A Virtual Confessional For Sexual Assault Victims 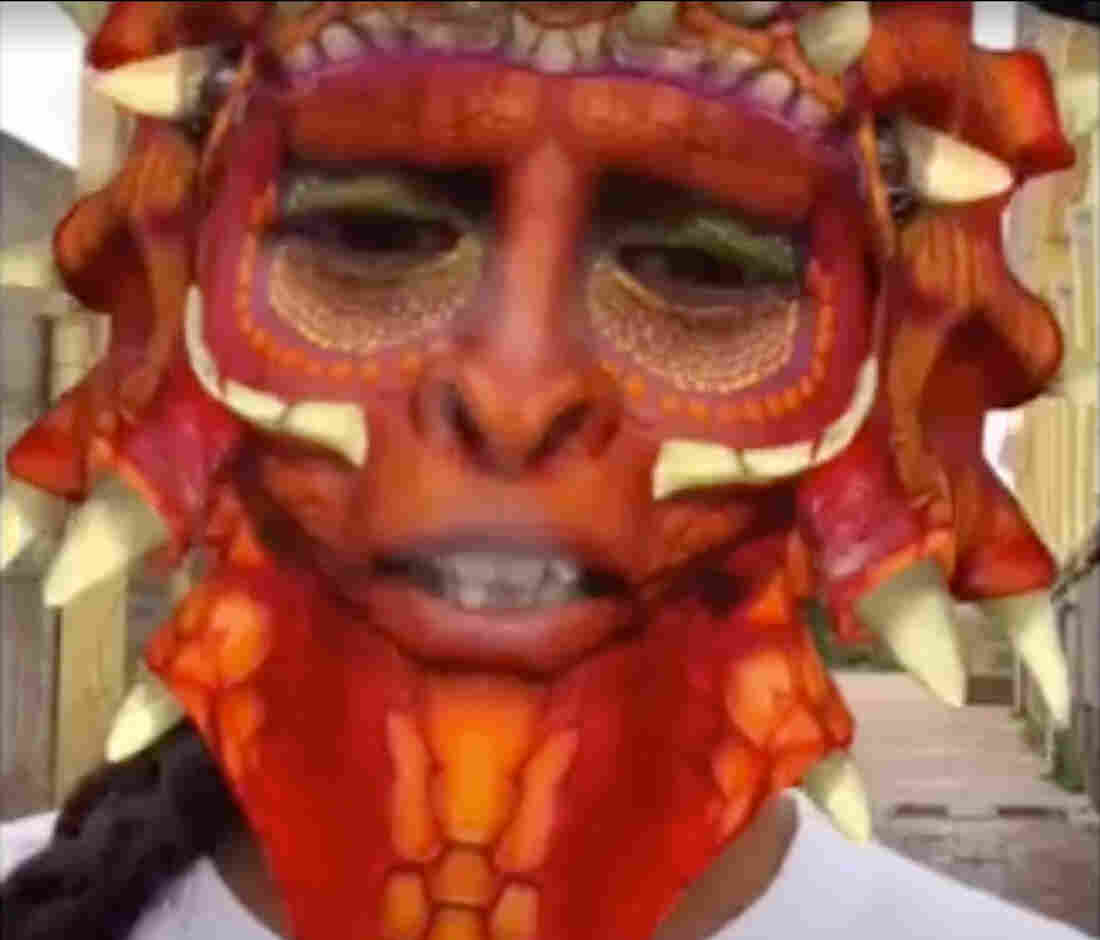 A sexual assault victim in India used this dragon Snapchat filter to protect her identity while telling her story to a journalist. Hindustan Times hide caption 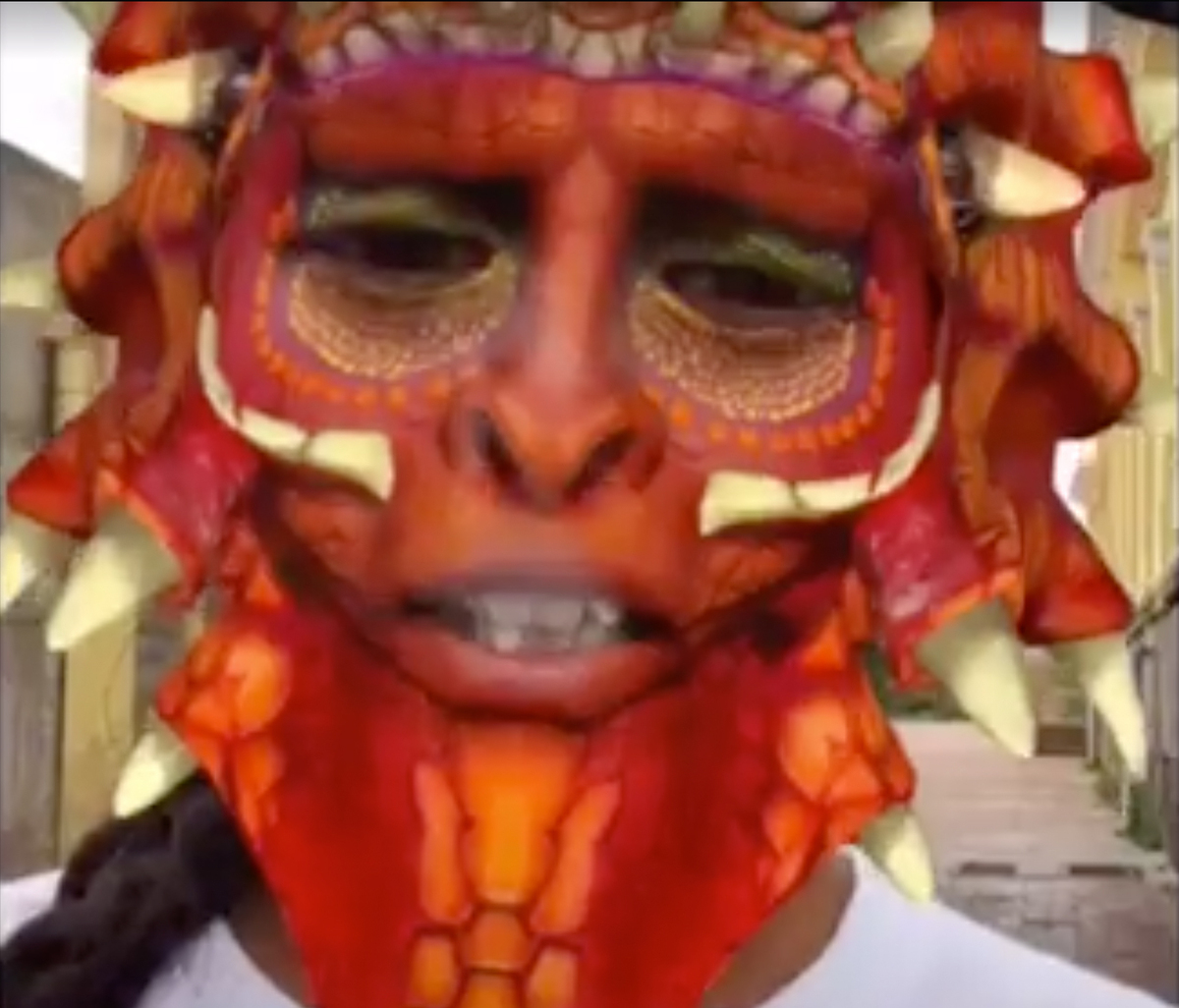 A sexual assault victim in India used this dragon Snapchat filter to protect her identity while telling her story to a journalist.

It sounds like a crazy idea. Convince a survivor of sexual assault to tell her story by filming herself with a fire-breathing dragon imposed on her face.

That's what Indian journalist Yusuf Omar did. He discovered that Snapchat, a mobile app that allows users to create photo or video "stories" that disappear after 24 hours, can be used to document a victim's first-person account while obscuring his or her identities.

Its built-in "filters" — illustrated or animated digital overlays — can transform a subject's face into anything from a flower child to a puppy.

"I found it beautiful and personal to have [survivors] explain what happened to them," says Omar, mobile editor at the Hindustan Times, an English-language news company in India. "But, blurring, silhouetting didn't seem authentic to me."

In his country, an estimated one in every two children is sexually abused. But the rates of reporting the abuse are abysmally low, and conviction rates for the perpetrators are lower still.

Not only is there social stigma attached to speaking out, Indian law prohibits the media to disclose a minor survivor's name, location and any details that may serve as identifiers. Like U.S. law, it helps protect the victims — but it also makes it hard for them to tell the world what happened in their own words.

Snapchat is an innovative, creative idea to give survivors a voice, says clinical psychologist Sonali Gupta. "Speaking without an audience can be freeing; this is the principle behind confessionals [in churches]. One is less inhibited without someone watching."

In June, Omar reported on a group of rape survivors and activists who came together to climb Chamundi Hill in Mysore. The event, organized by the global nonprofit Climb Against Sexual Abuse, was a metaphor for overcoming trauma. Each of the 50 minors who attended had stories about being trafficked and abused. Omar encouraged two teenage rape survivors to tell their stories using one of Snapchat's many filters to disguise their faces.

To keep the girls anonymous, Omar had them use his Snapchat account, not their own. He handed them his phone and stepped away. The girls spoke individually to the camera and told their stories, without the intrusion of a reporter, cameraman and crew.

The app gave them complete control over their words, their stories and their appearance. Coincidentally, both girls selected a filter that overlaid a fire-breathing dragon on their faces. It may seem silly, but Omar says he suspects they picked it because it "just offered the most coverage."

"I was five years old when it happened," said one survivor in her video account.

"I was kidnapped from Mysore and brought to Hyderabad," said the other. "I was locked in a room, they tortured me and never let me out."

Gupta suspects that this approach helped the subjects be more candid. "When we speak, we always gauge the listener for nonverbal reactions, and match our responses according to [what we think] is being interpreted," she says. "But not having another person present when we share — that's a set up that really works."

Once the video was complete, Omar downloaded it from Snapchat and used some of the footage in a 90-second video he produced to accompany a story for the Hindustan Times.

The video was watched nearly 200,000 times on Facebook, and it grabbed global headlines for its innovative use of Snapchat.

Activists hailed the approach for giving a voice to the survivors — especially in a country where people are "not comfortable talking about sexuality in general," says Manjeer Mukherjee, a director at Arpan, a child protection group.

That's why sharing personal stories from sexual abuse victims is so important, says Vrinda Grover, an Indian lawyer and human rights advocate. As a society, "we must hear their fears and constraints in order to address them," she says.