Accessibility links
A Native Of Kolkata Writes Of The Mixed Feelings Many In His City Have About Mother Teresa : Goats and Soda She truly embraced the suffering that was often ignored. But that's not all there is to Kolkata. 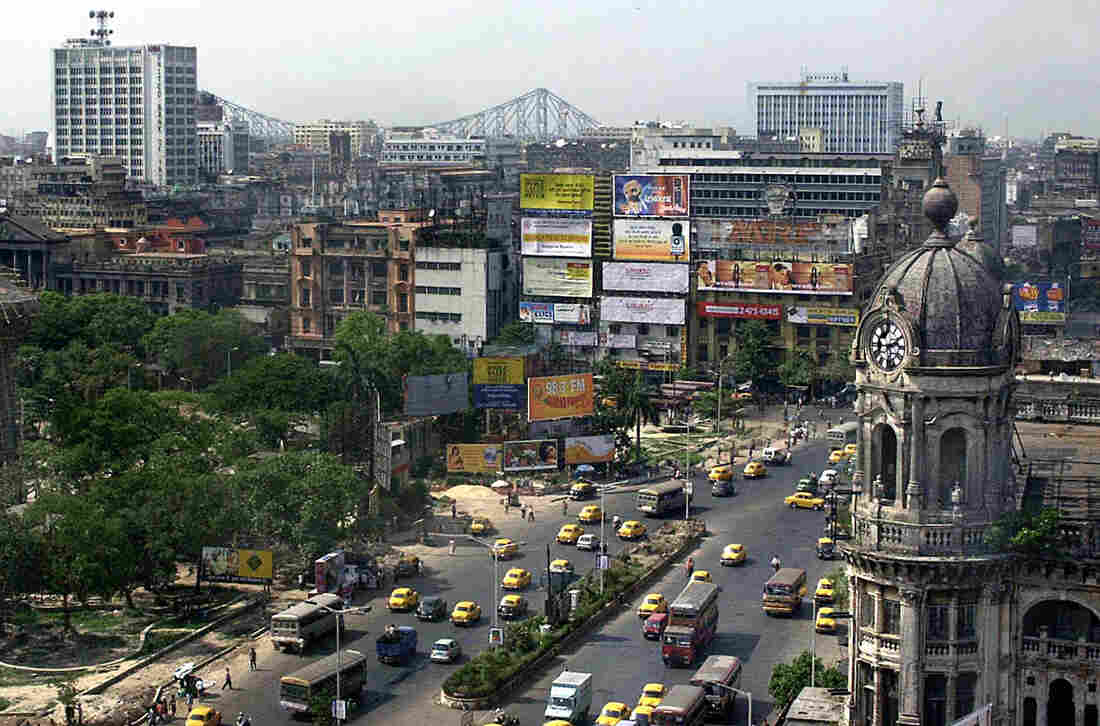 While Kolkata still grapples with poverty and economic uncertainty, it is also one of India's more affordable and safer cities. It's embarking on ambitious infrastructure projects. Deshakalyan Chowdhury /AFP/Getty Images hide caption 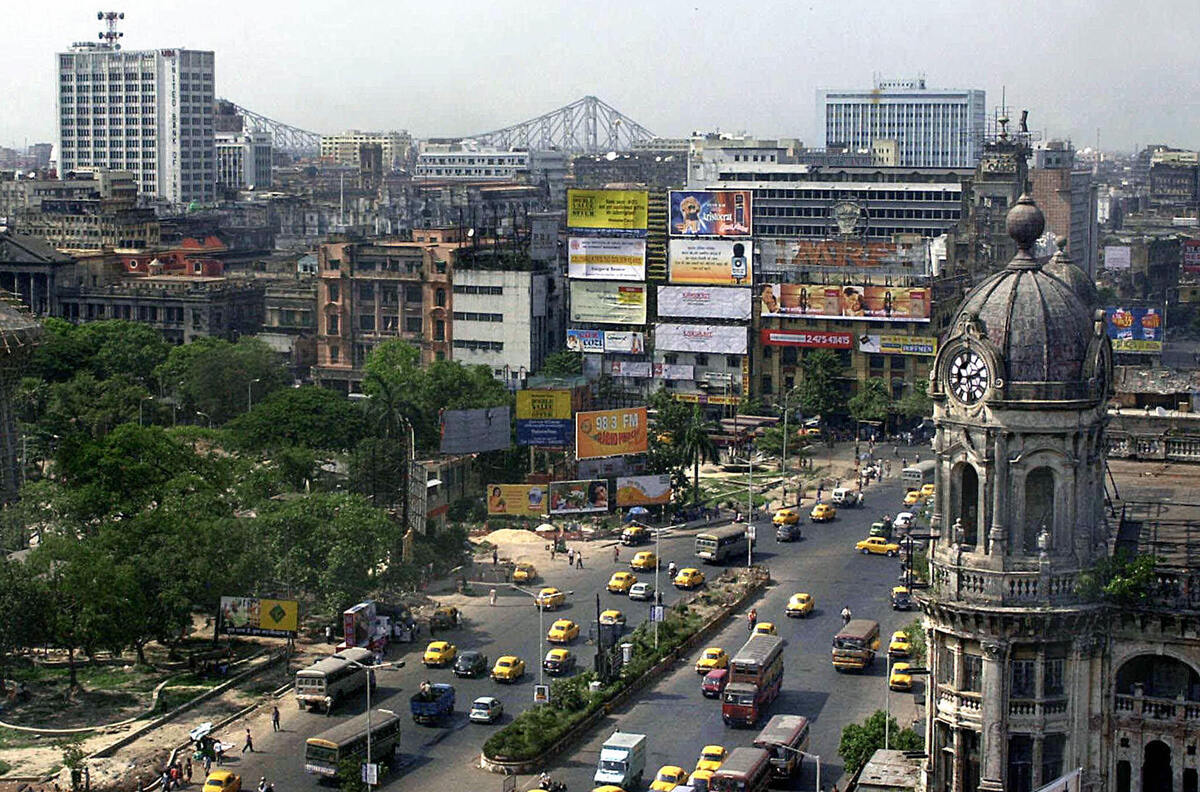 While Kolkata still grapples with poverty and economic uncertainty, it is also one of India's more affordable and safer cities. It's embarking on ambitious infrastructure projects.

Only five Indian citizens have won the Nobel Prize, and four of them have a deep Kolkata connection. This is a source of great pride to us with roots in that city. But when I went to the U.S. I realized quickly that nobody had heard of literary giant Rabindranath Tagore or physicist C.V. Raman. Even economist Amartya Sen was not that well-known. But everyone knew of Mother Teresa.

When Americans learned I was born in the city, the first thing they'd usually ask is: "Have you ever met Mother Teresa?"

As a matter of fact, I had seen her. And like many in Kolkata, I have mixed feelings about her relationship with our city.

I went to a Jesuit-run missionary school in Kolkata in the 1980s. We non-Catholic boys did not have to go to catechism classes, but as part of our "social service" we routinely went to her homes for the destitute with packets of milk powder, biscuits and old clothes. We were young and Mother Teresa, then in her 70s, already seemed impossibly old and hunched, her wrinkled face a startling contrast to the crisp pleats of her white-and-blue saris. We admired her because she did what we did not have the stomach for — tending to men and women whose limbs were stunted by leprosy, looking after children with lesions, comforting the dying. I came from a middle-class family that insulated me from all of that. We looked away when the beggar without hands knocked on the car window with his stumps wrapped in grubby bandages. Mother Teresa did not just look that beggar in the eye. She embraced him.

Her devotion to my city, where she lived from the 1930s until her death in 1997, could not be questioned, and I was not one of those who only saw her foreignness. Albanian-born Mother Teresa was an integral part of my city; she was as much a Kolkatan as I was. But she did not define my city for me. She was part of the patchwork that made up Kolkata along with its artists, its filmmakers, its politicians, its cricketers. Only when I went to America as a student did it start feeling as if my city had somehow become Mother Teresa City and nothing more. I would always feel uneasy, almost guilty, when I met those volunteers who had been to Kolkata. For them it was their hardship posting and a place of self-discovery. For me it was just home.

It made me wonder how I could take pride in a woman whose life's work was at its essence all about the failures of my city. Those sick, those poor, those dying, those diseased were all the people who had been abandoned by my city, spurned by their government, failed by their social service organizations. Pride in her Nobel made me a little queasy.

This is not to pretend that the suffering underbelly that Mother Teresa exposed was not real. Not at all. But there was another Kolkata as well — a city of coffeehouses and bookstores; a city of great political fervor and artistic ferment; a city with Swiss patisseries, Jewish bakeries and Bengali sweet shops; a city with its own triumphs and tribulations — and that city was lost in her overwhelming aura. Mother Teresa died while I was in America, but the Kolkata she left in the global imagination remained my cross to bear.

This image of Kolkata was not concocted by Mother Teresa. In 1756, more than 140 British soldiers and civilians were imprisoned by the local nawab of Bengal in a small dungeon in a fort in Kolkata. One hundred twenty-three died of suffocation and heat exhaustion. That tragedy gave birth to the phrase "Black Hole of Calcutta," an image the city never shook off. In Eugene O'Neill's Long Day's Journey into Night a character says, "Can't expect us to live in the Black Hole of Calcutta." Over two centuries later an Indian prime minister, Rajiv Gandhi, raised the hackles of the city when he casually called it a "dying city," one that had fallen off the map of major airlines. Then along came Dominique Lapierre and his 1985 novel, City of Joy, which became a film that cemented that image of Kolkata as the helpless crucible of India's poverty waiting for a Patrick Swayze to come save it from itself.

Kolkata, like many Indian cities, still grapples with poverty and economic uncertainty, but it's also one of India's more affordable and safer cities, no longer beset by power cuts and embarking on ambitious infrastructure projects. It's also the city with India's first subway system. Once the capital of the British Indian Empire, it has long been seen as a city in decline, racked by political unrest, beset by power cuts, abandoned by industry. Even its resident Bengalis have left in droves for opportunities elsewhere. Yet it's still a city that survives and rejoices and celebrates. We have drunk beer on its rooftops and sipped steaming cups of tea while sitting on its front porches.

Mother Teresa followed her calling as we must each follow ours. But now as she becomes a saint, the world's media have come calling again to try to rediscover Mother Teresa's Kolkata. Many still go to her tomb with prayers and wishes written on chits of paper. Her Missionaries of Charity still run the homes she set up. And though critics wish they could have opened a state-of-the-art hospital with all the money her order received, the Missionaries of Charity have no intention to diversify.

A part of me wants to think that now that she is officially a saint, she will be reclaimed by the Catholic Church as she should be. But as the state's chief minister inaugurates a life-size statue in the archbishop's house in the heart of the city and flies off to the Vatican to watch the beatification, as politicians demand rail stations and airports be named after her, I wonder if Kolkata can easily let its Mother Teresa go.

As part of a recent beautification drive, the city authorities decided Kolkata's public structures, its bridges, overpasses, police stations, water tanks needed to have a uniform color scheme. Since the last few months that's been extended to the city's lights as well. The lampposts are draped in LEDs of the same color scheme. The colors happen to be blue and white — Mother Teresa colors.

It's just coincidence, but at night as you land in my city for a moment you could be fooled into thinking you are entering the twinkling chapel of St. Teresa of Kolkata.

Sandip Roy is a writer living in Kolkata. He is a commentator for NPR and his first novel is Don't Let Him Know.