Accessibility links
South African Girls' School Repeals Hair Policy After Accusations Of Racism : Goats and Soda Pretoria High School for Girls has long banned certain hairstyles so that students would have a "neat" appearance. Now black students are pushing back.

Decrying Hair Rule, South African Students Demand To Be 'Naturally Who We Are'

Decrying Hair Rule, South African Students Demand To Be 'Naturally Who We Are' 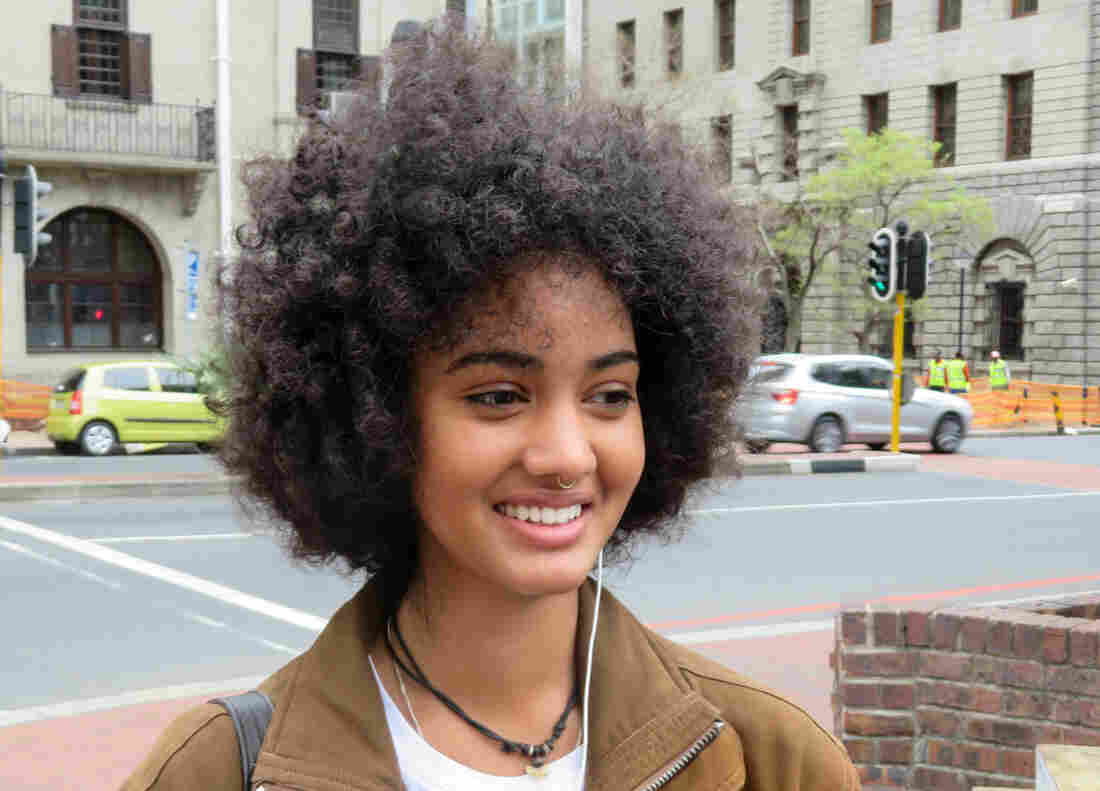 Zia Simpson, a student and sales assistant in Cape Town, says even her father tells her to tame her Afro. "That generation fought against apartheid, but they still carry around the mentality that green eyes look better on a person, that straight hair looks better on a person." Alan Greenblatt for NPR hide caption 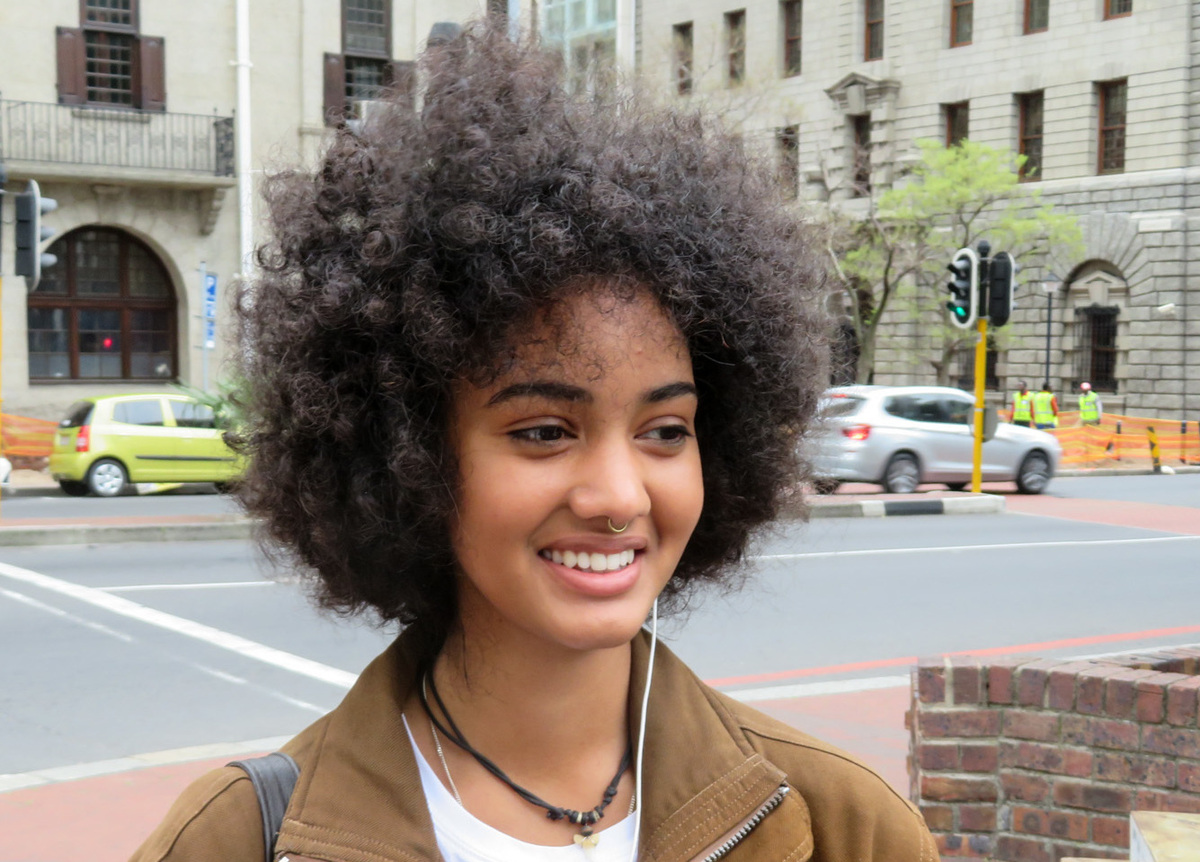 Zia Simpson, a student and sales assistant in Cape Town, says even her father tells her to tame her Afro. "That generation fought against apartheid, but they still carry around the mentality that green eyes look better on a person, that straight hair looks better on a person."

For many teenage girls, nothing is more sensitive than the way they feel about their appearance. In South Africa, race has been added to that delicate equation.

Last month, black students at the prestigious Pretoria High School for Girls protested a clause in the school's code of conduct that banned wide cornrows, braids and dreadlocks. It wasn't a new policy, and many South African schools have enforced similar rules before. But this time, girls pushed back — and their complaints touched a nerve.

The school, which was an all-white institution until the mid-1990s, dropped the restrictions a few days later — but not before triggering a debate across the country.

"They make it out to be about grooming, but it is about race," says Lesley Chandata, a black woman from Zimbabwe who waits tables at a pizza parlor outside Cape Town.

The crux of the complaints from students and their supporters is that black South Africans are singled out for punishment or derision because of their appearance or speech. Even political parties like the Economic Freedom Fighters and the ANC Women's League and government officials joined the discussion, denouncing the policy.

"Schools should not be used as a platform to discourage students from embracing their African identity," tweeted South Africa's minister of arts and culture, Nathi Mthethwa.

The Pretoria High hair rule seemed to perpetuate the notion that even in the post-apartheid era, Africans in Africa shouldn't look or act like Africans.

"When I first heard about it, I took it very personally," says Thandi, a psychology student at the University of Cape Town who asked that only her first name be used. "This is Africa, and we can't be naturally who we are."

The reason for hair and dress codes, argue some South African educators, is that personal expression can take the focus away from learning. Uniforms are ubiquitous in schools across the country. And when it comes to hair, educators insist on neatness — a standard many of them have defended as race-neutral.

But plenty of South Africans see a double standard at play. The Pretoria High policy singled out "cornrows, natural dreadlocks and singles/braids," limiting them to "a maximum of 10 millimeters [about a third of an inch] in diameter." Violators were told to cut their hair or they'd be given demerits that can lead to suspension and expulsion. Afros were not specifically mentioned but the hair code does state that "all styles should be conservative, neat."

Tiisetso Phetla, who graduated from Pretoria High last year, told NPR's Rachel Martin that people at school would call her natural hair "barbaric" and that it looked "like a dog's breakfast" and was told to "remove that nest off your head."

"Your mood would completely change for the entire day," she said. "You'd be de-motivated for the day because they tell you that you don't look as if you belong in the school."

As is often the case in such codes, however, straight hair was not limited in such specific detail. It could be worn long if pulled back in a ponytail.

Still, student protests continue across the country. On Monday, about 300 current and former pupils of San Souci Girls' High School in Newlands, outside of Cape Town, met with the provincial education minister, demanding systemic changes to school policies and personnel.

Thousands of people have tweeted with the hashtag #StopRacismAtPretoriaGirlsHigh on Twitter, calling the code of conduct "offensive" and "absurd."

And as of Tuesday morning, nearly 32,000 people had signed an online petition calling for an end to discrimination at Pretoria High, which includes "disciplinary action" for teachers who enforced the policy and "protection" for the students who protested.

Black girls at schools around the nation complained not just about hair but being referred to as "monkeys" or "kaffirs" (South Africa's rough equivalent of the N-word) or being told by teachers to stop making "funny noises" when they speak in African languages among themselves.

While black and white girls may sit together at the same schools in a way that was inconceivable under apartheid, they aren't necessarily sharing the same experience.

"I wasn't surprised at all that this protest struck a chord with so many women," says journalist Milisuthando Bongela, who is working on a documentary about hair and black identity that will be released next year. "It is something that has been waiting to explode for a very long time in South Africa."