Accessibility links
India Debates The Ethics — And The Legality — Of Hiring Poor Women To Serve As Surrogate Mothers : Goats and Soda They're often poor women, lured by the money they'll receive. But are they being exploited? The government is considering a law that would end commercial surrogacy. 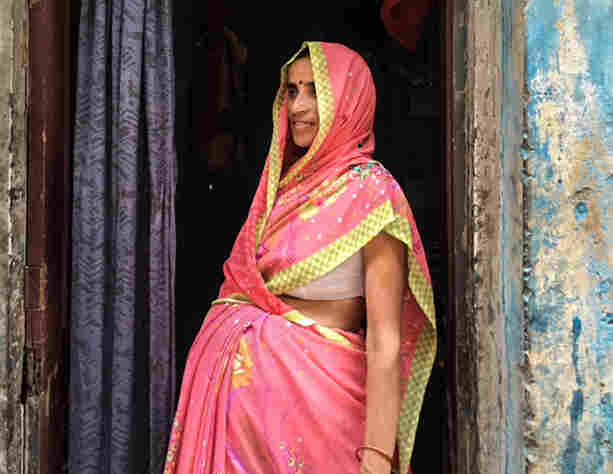 Isha Devi, 30, became a surrogate to help keep her family afloat. Her husband, a rickshaw driver, couldn't work after an accident with a bus — and medical bills began mounting up. Julie McCarthy/NPR hide caption 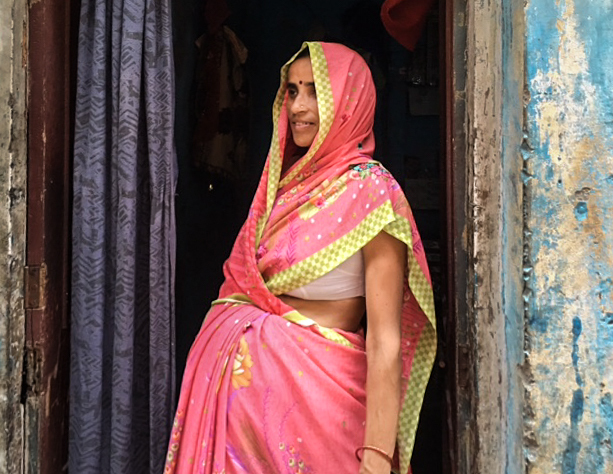 Isha Devi, 30, became a surrogate to help keep her family afloat. Her husband, a rickshaw driver, couldn't work after an accident with a bus — and medical bills began mounting up.

Isha Devi hails from Agra, home of the Taj Mahal, built by a grieving king for a beloved queen. Isha now lives three hours and a world away from any such romantic ideals.

Renting a small dingy room, this mother of a 12- and 14-year-old has come to the outskirts of New Delhi to live close to her fertility clinic. Isha, 30, is six months pregnant with someone else's twins. Her room opens onto a noisy alleyway of families in similarly cramped quarters all sharing a single bathroom. Isha groans, shifts uncomfortably on her cot and rearranges her pink floral sari.

Isha explains, "I was helpless" and became a surrogate to expunge a family debt.

Surrogacy has been described as a thriving — and lucrative — industry in India. But no national surveys have been done to come up with an estimate of how many women are involved. And no law currently governs surrogacy in India.

That could change. The government is proposing a law that would bar couples married fewer than five years, unmarried couples, gays, singles and foreigners from commissioning a surrogate. "Legally wedded couples who have been married for at least five years can opt for surrogacy," the foreign secretary has said about the proposed legislation. The bill would limit the practice to "altruistic" cases, where a woman would provide the services of her womb for free, either for implantation of an embryo conceived by in vitro fertilization or artificial insemination with the father's sperm.

But with India's most disadvantaged women acting as surrogates, would a ban deprive them of an economic opportunity or protect them from exploitation?

"I would have never done this," Isha says. "But my husband had a terrible accident when his rickshaw slid under a bus. He fractured his hip and can't work. That was our only income." Her husband earned $5 a day. His medical bills mounted to $3,000 dollars.

Then her sister told her that women get paid for carrying a child. Isha earns $160 a month during the pregnancy and will receive a lump sum of about $4,200 after the birth. But she says the monthly stipend is too small to pay off the debt, support her family, pay the rent and buy the pricey fruits and vegetables her doctors recommend she eat to stay healthy during the pregnancy. She does get free vitamin supplements from the clinic.

Her doctor, embryologist Anoop Gupta, runs one of the largest fertility clinics in New Delhi.

Judging by the constant telephone interruptions during the course of our interview, he's a man in demand. His clients, who span the globe, are mostly couples using in vitro fertilization to conceive their own child. Gupta's surrogacy practice is small. Gupta says he started working with surrogates in 1997 and has "650 surrogacies delivered by now."

His clientele includes gay couples and single females, a growing part of the surrogacy picture in India. "You are helping people who are helpless," he says.

Gupta says the going fee is one million rupees — or $14,000. Surrogates, such as Isha, receive less than half of the money. Doctors, agents, lawyers, labs, and technicians all get a cut. Still Gupta considers surrogates well-compensated and dismisses criticism that India's poorest women are being taken advantage of. "Pregnancy is not a big deal for them," says Gupta, who adds that he looks for "simple" women and once selected an educated engineer who gave him nothing but "headaches."

"Even if they don't [participate in] surrogacy, they will get pregnant themselves," he says of the impoverished women who become surrogates. "They do not use contraception. So they get pregnant, pregnant, pregnant! That's it! They are thoughtless people. Now if they get an opportunity to help somebody who is childless, and they help themselves with the money they can never think of in their lifetime — nobody has been exploited." In his view, the surrogates are helping alleviate their poverty and are less of burden on the state. "So what is wrong with that?" he asks.

Manasi Mishra, who heads the Research Division at the Centre for Social Research in New Delhi, thinks there's plenty wrong with it. She says the industry is "run by haves, to exploit the have-nots." She says Indian surrogates are rarely in a position to change the fundamental circumstance of their poverty because the payments simply aren't enough.

"This pregnancy is precious," Mishra asserts, "the mother is not."

In studies of 200 surrogates conducted in 2010 and in 2012, Mishra found many weren't paid what they were promised and deceived about the procedures. She says many women are told their deliveries will be natural childbirth but often undergo a Cesarean section. She also discovered some couples had commissioned more than one surrogate to boost their chances — with the less viable fetuses eliminated through a pill-induced miscarriage. "When she goes for a check-up, she's given the pill and told to come back after lunch," Mishra says, and then returns bleeding.

"She doesn't know it is an induced abortion," says Mishra. "She has been made to believe that it is because of her carelessness that she has aborted." One woman told Mishra she wasn't paid anything after losing the baby.

Mishra says one doctor "had the audacity to tell me that in a country where we have a high fertility rate" and where women abort unwanted pregnancies, where is the harm in "surrogacy arrangements?"

"We cannot do that in a civilized society," she says.

Jayashree Wad agrees. Last year, the 78-year-old attorney filed public interest litigation against surrogacy in a bid to bring to the attention of the Supreme Court the fact that the industry is "unregulated" and "abundant."

Wad argues that surrogacy amounts to the "commercialization of motherhood" and that it constitutes a form of exploitation using the bodies of women she describes as "downtrodden." She argues that the practice is an "infringement of fundamental rights" guaranteed under the Indian Constitution, specifically "unknowing exploitation."

Mishra says Indian surrogates typically have no more than a fifth grade education. They often cannot read contracts drafted in English. The surrogacy process makes a mockery of consent, she says.

Karuna Nundy, an attorney who practices before the Supreme Court, says the person "hiring the lawyer" typically gets to frame the terms — but "informed consent is absolutely essential."

Nundy says surrogates routinely do not understand their payment schedule or what health care services are being provided or the risks of surrogacy.

"The kind of information that is lacking, is what does this contract really mean? What do I do if all of these promises aren't panning out the way that you promise they are?"

Some observers believe a government committee needs to hear from the women whose bodies are being rented in the first place before any decision is made whether to ban or regulate surrogacy.

Back in her room, Isha Devi says she wants to meet the woman whose twins she is carrying. That's not likely. Doctors discourage it. It's one more uncertainty in a life bundled with them. But Isha has no doubt about one thing.

Surrogacy would not have been an option to enhance her family's meager finances had her husband not fallen ill.

Feeling alone and anxious, Isha quietly says: "Whatever I'm going through, nobody should go through."