Accessibility links
What Does Mark Zuckerberg Mean When He Says He Wants To Cure Diseases By 2100? : Goats and Soda The goal of curing all diseases "in our children's lifetime" sounds a lot like hype. But is it? It's the goal of Facebook founder Mark Zuckerberg and his pediatrician wife, Priscilla Chan. 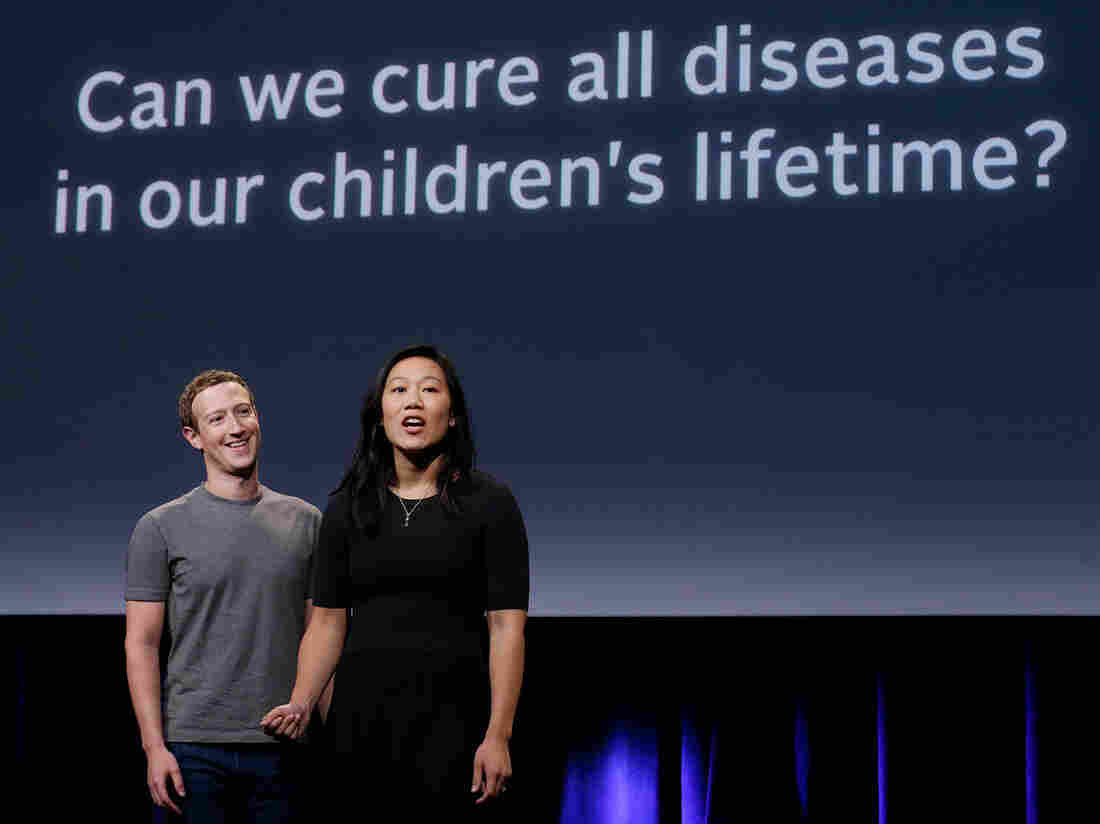 Facebook CEO Mark Zuckerberg and his wife, Dr. Priscilla Chan, have a new goal: cure, manage or eradicate all disease by the end of this century. And they're putting up $3 billion. Jeff Chiu/AP hide caption 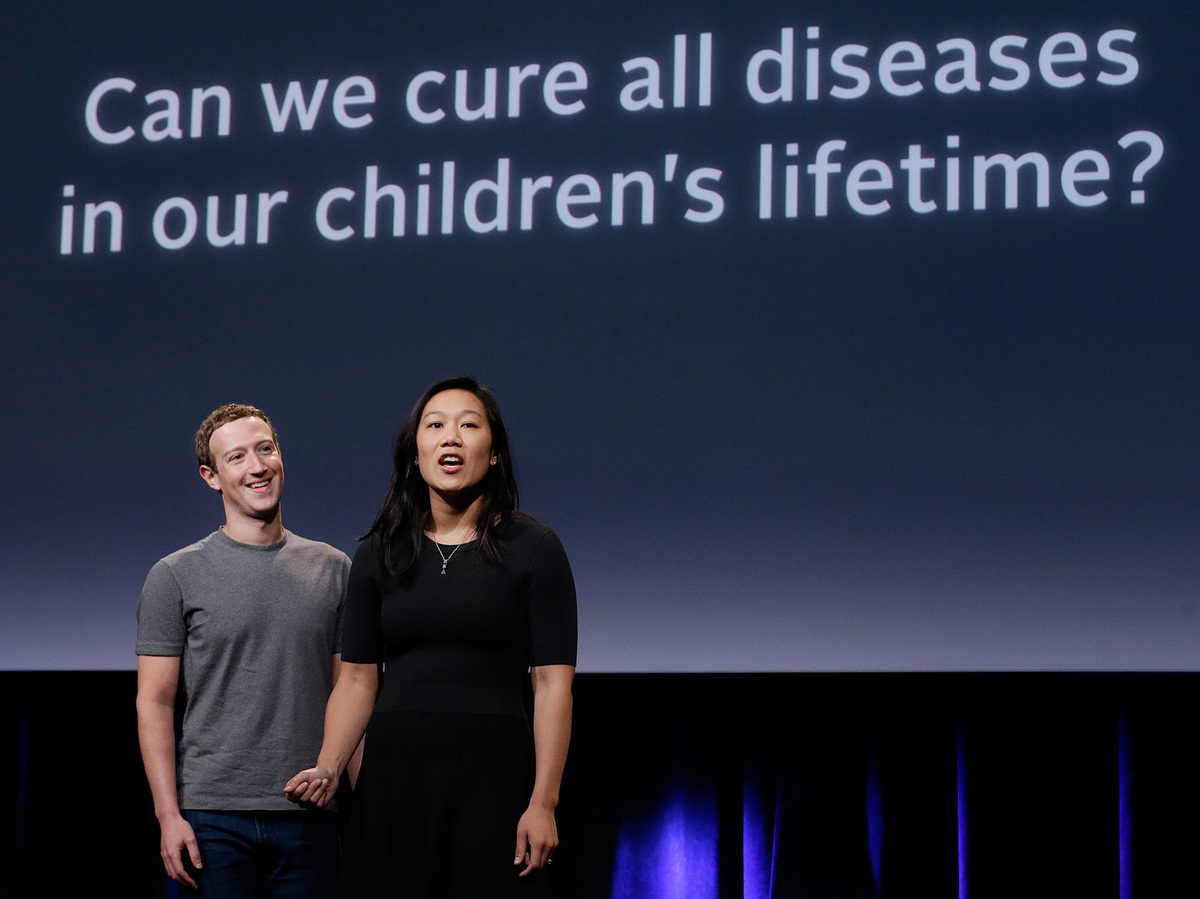 Facebook CEO Mark Zuckerberg and his wife, Dr. Priscilla Chan, have a new goal: cure, manage or eradicate all disease by the end of this century. And they're putting up $3 billion.

Priscilla Chan and Mark Zuckerberg are smiling, standing in front of a backdrop emblazoned with the question: "Can we cure all diseases in our children's lifetime?" They're announcing a $3 billion initiative to achieve that goal, and they're calling it Chan Zuckerberg Science.

No sickness in the whole world by the time today's babies, like the couple's 9-month-old daughter Max Zuckerberg, are old folks?

Seems like unbelievable hype from the Facebook founder and his pediatrician spouse. Zuckerberg himself walked the expectations back during the Sept. 21 launch. "Now, that doesn't mean no one will ever get sick," he said.

A lot can happen "in our children's lifetime." That's about 80 years, give or take a decade or so. "Eighty years is a long time," says Dr. Cori Bargmann, a neuroscientist at the Rockefeller University and newly named president of science for the Chan Zuckerberg initiative. "When I was a kid, there were no statins, there was no bypass surgery, no stents. Your friend's father would have a heart attack, and he would die." Today, roughly 40-plus years after Bargmann's childhood, a million people a year have either surgery to bypass clogged arteries or the implantation of stents to unblock dangerously clogged arteries — extending millions of lives.

Imagine what might happen in twice that time with an extra infusion of $3 billion to speed up research into the four major causes of early death: infectious disease, heart disease, cancer and neurological disorders like Alzheimer's and autism.

So a backdrop slogan that sounds like hyperbole actually may be a realistic goal, says Dr. Francis Collins, director of the National Institutes of Health, who is not part of the initiative. "I don't think they're naïve at all. I admire audacious goals," says Collins, a physician-geneticist and former leader of the Human Genome Project. "I think it's great that they're putting something out that sounds almost unreachable to make people think about what it would take to actually accomplish it. And when you think how far we've come in the last 80 years, it might just be possible."

Dr. David Baltimore agrees. He is president emeritus of Caltech and a 1975 Nobel Prize winner for his discovery of the reverse transcriptase enzyme that transfers genetic information both ways from DNA to RNA. "It's a reasonable goal that over the next century we're going to see the elimination of a lot of disease. They can make a significant contribution with the resources they're willing to put on the table," he says. "It is very important that they're going to fund the basic research that in the long run is going to make a difference."

But even billionaires can't solve the world's ills single-handedly. They can only help fill the gaps in research that other organizations, mainly the National Institutes of Health, can't cover. The NIH is the U.S. federal agency that is the world's biggest funder of medical research, to the tune of more than $32 billion a year. The Chan Zuckerberg Initiative is, comparatively, a pittance. And yet... "Three billion dollars is a lot of money," says Collins, "and I welcome their contribution."

People like Zuckerberg and Bill Gates — through the Bill & Melinda Gates Foundation — can help fund basic research or, more commonly, target specific diseases, like AIDS or malaria, says Collins. He says such contributions are important but shouldn't be used to argue that the government can afford to spend less on medical research. "Believe me, I worry about that," Collins says. "Despite the wonderful contributions by philanthropists, they have not made up for what the NIH has lost in the past 16 years." Between 2003 and 2015, the NIH lost 22 percent of its capacity to fund research due to inflation and budget cuts, according to the Federation of American Societies for Experimental Biology.

Philanthropy can complement, never replace the NIH, says Bargmann. But federal dollars are spent cautiously, while philanthropists, like Chan and Zuckerberg, "are looking for opportunities to fund big, less proven, ideas," Baltimore says.

And the relatively smaller size of the Chan Zuckerberg initiative means it can be more nimble. "Small organizations have more tolerance for risk and failure. You can try different models and take more risks," says Bargmann. "Some will fail, some will work. When they work, other people can copy them." And let's face it. Billionaires like Zuckerberg got where they are in part because of their tolerance for taking risks, says Baltimore.

The new initiative aims to develop new technology that can drive science forward. Technology has often come first, followed by medical breakthroughs—like the invention of the microscope preceding the development of the germ theory of disease; or the mapping of the human genome preceding genetic breakthroughs.

One project the initiative will work on is the creation of an atlas of all the cells of the human body, where they are and their molecular components. "That's information that can be used to understand every single disease," Bargmann says.

One specific disease in her field of neuroscience is an extreme form of narcolepsy, in which people cannot stay awake. "There are 86 billion nerve cells in the brain," says Bargmann, "and 20,000 of them make orexin." Orexin regulates arousal and wakefulness, and when those 20,000 cells don't function, people suddenly drop into sleep. "The other 86 billion neurons cannot keep you awake. That's why knowing where the cells are is important."

And why not let a billionaire or two help pay for the science to get humans closer to a disease-free life. "There's an enormous amount of money flowing into the hands of a very small number of people in the U.S.," says Baltimore, also not part of the initiative. "These people who have resources measured in billions can make a difference. With the right mindset, two people can make an enormous dent in how we're going to move forward."