Accessibility links
The Hult Prize Gives $1 Million To The Creators Of The Magic Bus App : Goats and Soda The $1 million Hult Prize went to team Magic Bus, operating in Nairobi. By cutting wait times, the bus crew could make customers happy — and boost their own income. 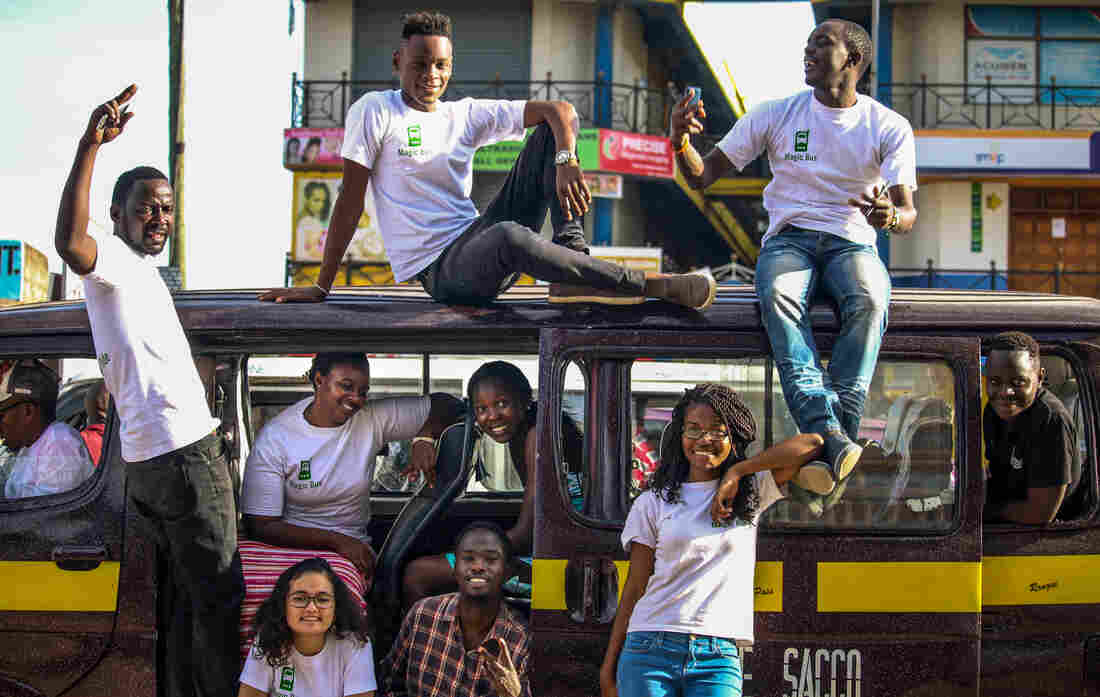 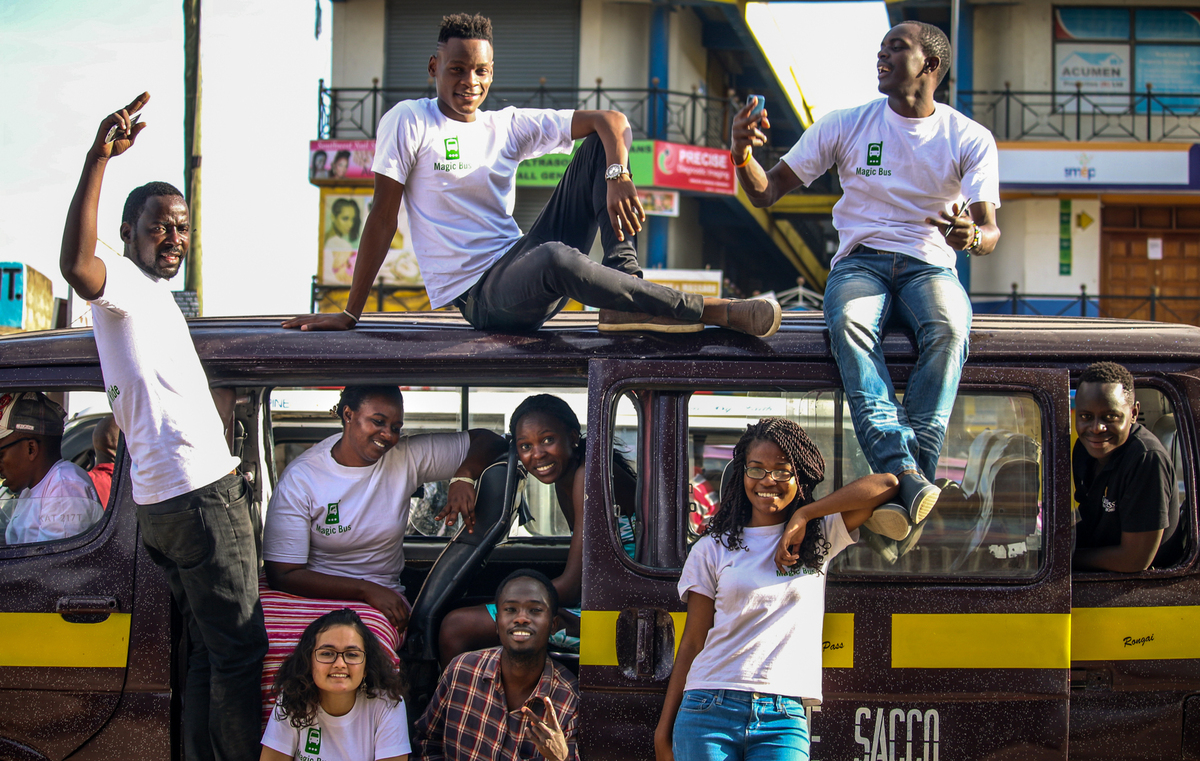 A shriek went up around the young executives of a start-up company as they made their way to a beaming Bill Clinton. They had just won the million dollar Hult Prize for an idea they dreamed up and launched over the last 12 months.

Each year, the former president calls on student entrepreneurs to find solutions for the world's most pressing problems. In a banquet hall of a midtown Manhattan hotel last Tuesday, five teams pitched plans that could double incomes among the crowded urban poor and, perhaps, win them the coveted Hult Prize, which is funded by Bertil Hult, founder of EF Education First, and operates in partnership with the Clinton Global Initiative. 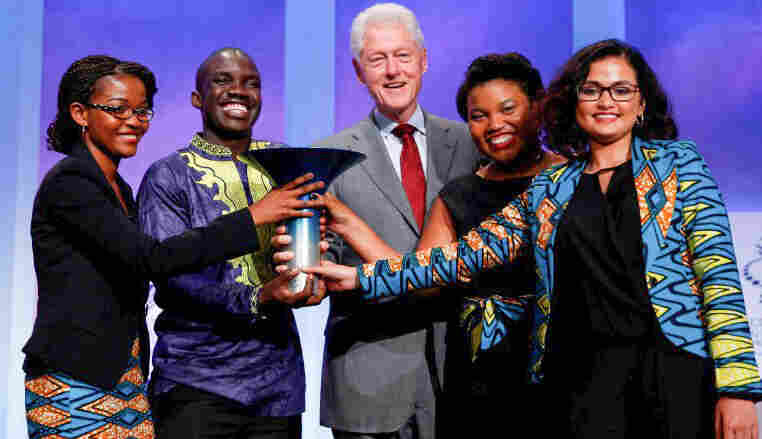 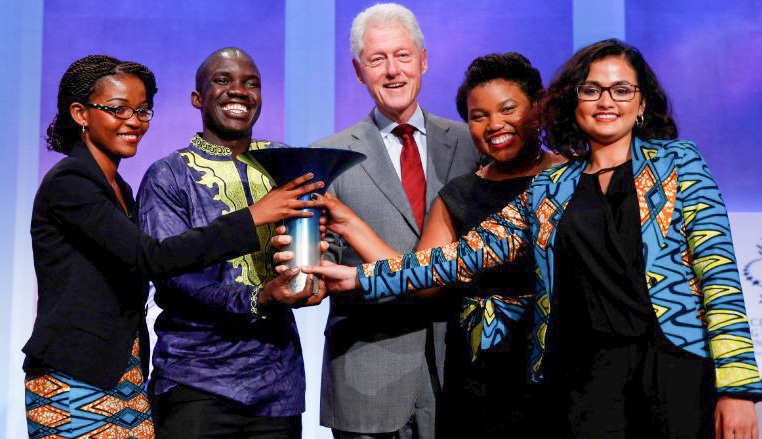 The 2016 winner, as Clinton put it, "is a really clever idea." Magic Bus Ticketing is, in essence, an app. It's simple and based on text messaging, and it's trying to streamline a byzantine informal minibus system that 70 percent of Africans use for daily transportation, Clinton said. "The transportation system is plagued with inefficiency," Clinton said as he awarded the prize. "Soon, some big wag will be calling this the Uber of buses."

The four students who make up Magic Bus team met as undergraduates at Earlham College in Richmond, Indiana. They decided to tackle transportation for the 2016 Hult Prize. "We are both from developing African countries," says Wyclife Omondi, Magic Bus' 22-year-old CFO, gesturing to himself and the company's CEO, 21-year-old Leslie Ossete. "So when we came up with the idea, we wanted to solve some of the challenges we have in our home countries." The other two team members are from the U.S. and India.

Omondi, who is from Nairobi, is quite familiar with waiting for a minibus — or matatu, as they're called in Kenya. "I've lived this all my life. When you see the amount of time people spend in this matatus waiting. First of all – it's undignified," he says. "You think people could have spent much more time doing other productive things."

The problem is everyone's in the dark on what the buses will be like on any given day, Ossete explains. Riders have no idea when the buses are coming because the schedules are unpredictable. In Omondi's hometown, people can lose up to two hours of their day waiting for a bus.

That can be devastating for people who depend on the matatus to get around. "I'm from Congo. I've been the one waiting for the bus. I know what it means for a young student to [miss] class and [not] go home on time," Ossete says. "I have friends and family who have missed important opportunities because no bus showed up." People sometimes lose jobs because of unreliable buses, Ossete says.

If the bus waits for all seats to be filled before kicking off, passengers along the route are stuck in a commuters' purgatory as packed buses pass them by. Waiting at the terminal for extra passengers costs the bus crews money too, though, since they could use that time to make more rounds.

But with Magic Bus Ticketing, Ossete says that the bus crews can use a tablet app to see how many passengers are waiting on the route. So they'll take off with a bus that hasn't filled up, counting on the riders who bought digital tickets. Riders who want to use Magic Bus can text a code to get information on fare prices. Then they text again to buy a fare and receive a digital ticket to show to the conductor.

The team started testing the technology at the end of May, 2016, running a pilot program in Nairobi. According to their test, Magic Bus bus crews can double their income from about $5 to $10 a day through the extra trips they're able to make because of the app.

They've mostly focused on college campuses thus far, where word of the fledgling company spread like, well, magic. "We piloted for 9 weeks with 10 buses. And we were able to book 5,000 Magic Bus tickets, and we had more than 2000 users," Ossete says. "We didn't expect [that]."

They haven't been able to expand much more than that because they haven't been able to purchase the technology to support more users and buses. Now, with their new pile of Hult Prize money, they're going to expand their operation — maybe even take it out of Kenya and into several other African countries over the next few years. Once their business is humming along, the team will charge a 5 percent surcharge per ticket to keep the company afloat. "It's exhilarating," says Iman Cooper, 23, and Magic Bus Ticketing's Chief Marketing Officer. "It's just an amazing feeling after a year of working on this project to know that we've taken this idea into an actual business."

The Magic Bus Ticketing team aren't the only winners. The other finalists get to present to an audience that includes investors and other entrepreneurs who might be interested in what they're pitching.

One team showed off a food cart that has a solar-powered charging station for customers' electronic devices — another way for street vendors to make money. "This seems like a natural approach for a development bank," said John Chambers, the executive chairman of Cisco and one of the judges, to the team during a Q&A after their presentation. "Have you approached any development banks on the World Bank level or in Africa?"

"We've spoken to several banks in Uganda and one in Kenya, but we're really hoping to impress a certain someone tonight," the Musana Cart COO Nataliey Bitature replied, casting an eye at another one of the judges, African Development Bank president Akinwume Adesina. The crowd laughed and cheered.