Accessibility links
Why Are There No Consequences For Military Attacks On Aid Workers? : Goats and Soda The attack on the trucks delivering humanitarian aid in Aleppo was potentially a war crime. But it's not likely anyone will go to jail for it. Is this the new normal? 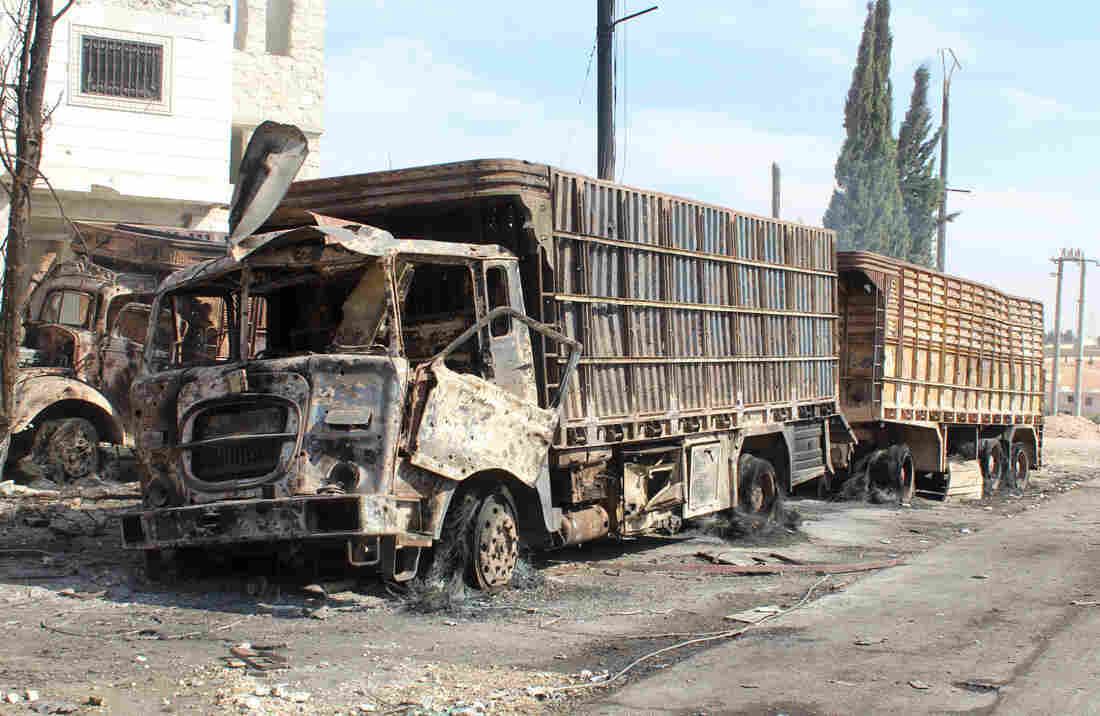 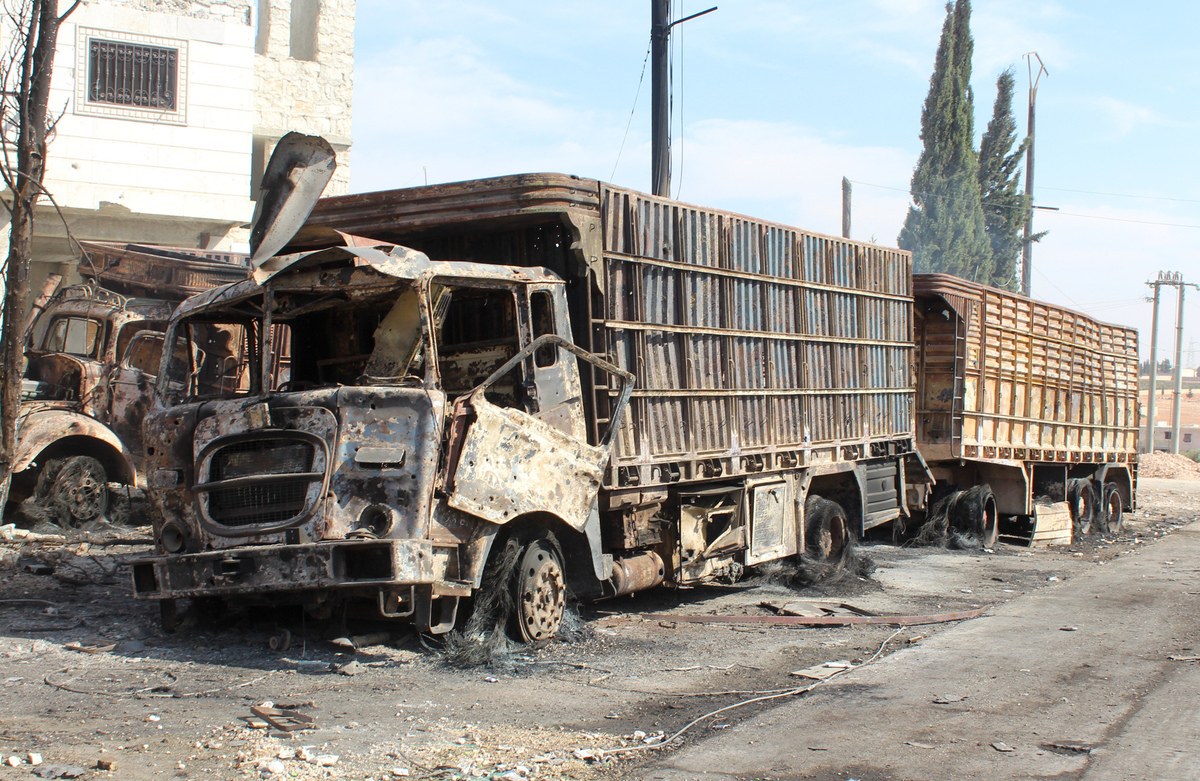 Winter clothes, blankets, food and medical supplies. In an act of humanity, a U.N. aid convoy was carrying these precious necessities to a neighborhood in Aleppo, Syria, cut off by war. The convoy never made it.

Last week, 18 of the 31 trucks were bombed, killing 20 people, including 12 aid workers. U.N. Secretary-General Ban Ki-moon called the attack "sickening, savage and apparently deliberate" at an address at the U.N. General Assembly in New York. The U.S. blamed Russia for the attack; Russia blamed the U.S. and Syria.

And Friday, the World Health Organization called on all "belligerents" to stop destroying already crumbling and understaffed hospitals and medical facilities — and allow the sick and wounded to be safely evacuated. NGOs have not been able to deliver aid to desperate parts of Aleppo, including aid and medical supplies from the WHO, since July.

There are long-standing rules against this kind of attack, and the rules are simple: Don't target medical facilities. Don't harm doctors and medical workers. Don't harm civilians, including aid workers. They're outlined in a raft of domestic and international laws. This includes the Geneva Conventions, a treaty ratified by 196 nations after World War II, and several U.N. Security Council and U.N. Human Rights Council resolutions.

Yet aid workers are operating in environments that are increasingly hostile to them, says Anaïde L. Nahikian, who runs Harvard's Advanced Training Program on Humanitarian Action. In October 2015, U.S. planes bombed a Doctors Without Borders (MSF) hospital in Kunduz, Afghanistan, killing 42. In July, South Sudanese soldiers brutally gang-raped foreign aid workers. And the number of reported kidnappings of aid workers each year quadrupled to 121 from 2002 to 2014.

In the past few years, almost no one has been arrested or jailed for these atrocities or prosecuted at the International Criminal Court or ad hoc U.N. tribunals. The message to violators is that they can act with impunity, says Patricia McIlreavy, vice president of humanitarian policy at InterAction, a coalition of global NGOs. "I don't know of any punishments that have been meted out," she says.

"Warring parties today have a license to kill — without consequences or accountability for their actions," says Shannon Scribner, associate director of humanitarian programs and policy at Oxfam America. "[The world's] standards no longer carry much weight."

Aid groups are wondering if anything can be done to stop it.

The U.N. Security Council would be a logical place to turn. But in fact, Scribner says the council, whose mission is to maintain peace and security, is partly to blame for the lack of consequences. "They can't even bring [peace-building] resolutions to a vote because they're blocked by one of the five permanent members [China, France, Russia, the U.K. and the U.S.] who themselves are committing these violations," she says. Russia and the U.S., for example, have not been able to agree on cease-fires in Syria in recent talks.

Doctors Without Borders Are Now Doctors In Anguish

In the wake of last week's Aleppo blast, the humanitarian sector expressed more doubts about the Security Council's credibility. Although it passed a resolution in May condemning attacks on medical facilities, hospitals and humanitarian operations continue to be targeted — 19 of MSF's operations in Syria, for example.

Aid groups are calling for the Security Council to, essentially, do its job: punish the violators. In a speech Wednesday, MSF President Joanne Liu told the Council: "We call on you to immediately enact the absolute prohibition of attacks on medical facilities. Even if those you see as enemies are being treated in them."

There have also been calls for the U.S. to play a role. InterAction released a report in February urging President Obama to make sure U.S. armed forces do a better job protecting civilians and to pressure foreign forces to comply with the laws. "The U.S. should not underestimate its power of its example and leadership," the report said.

But, in fact, the U.S. has set an example that has been criticized. After U.S. troops bombed the MSF hospital in Kunduz, the U.S. government conducted its own investigation, calling the attack an "accident," not a "war crime." There were reprimands for 16 personnel, ranging from suspension to removal. In a public statement, MSF said the punishments were "out of proportion to the destruction."

Currently, "parties responsible for committing war crimes can investigate themselves," says Scribner. "It's not against the law, but it doesn't allow for truly independent investigations."

There's a 1991 solution to this 2016 problem. Twenty-five years ago, the Geneva Conventions set up the framework for an International Humanitarian Fact Finding Commission. The idea would be to establish an an unbiased group of seven individuals from countries not involved in the conflict under investigation. They'd gather facts and evidence on war crimes. But first, one of its 76 signatory states must sponsor an investigation. That's never happened — not even after MSF called on the Commission to investigate the Kunduz attack last October. MSF's Liu, at a speech in Geneva, accused governments of being "too polite or afraid to set a precedent."

Aid groups are now turning to the public. Action Against Hunger, for example, is seeking support for the creation of a U.N. Special Procedure to report and document attacks on medical facilities and humanitarian workers. And Oxfam is asking for signatures for a petition to convince world leaders, like the U.K. and the U.S., to stop selling arms to countries like Saudi Arabia that have used them to attack schools, hospitals and aid facilities in Yemen.

The problem is keeping the effort going. "We have short attention spans," says Helen Durham, head of international law and policy for the International Committee of the Red Cross. "We see something terrible and then it disappears. We need to keep saying that these protections are valuable, they're worthy, and they speak to our common humanity."

"And keep expressing outrage when the laws are breached," she adds.