Accessibility links
Uganda Crowns Mr. And Miss HIV Positive Based On 'Inner Beauty' : Goats and Soda There's a talent competition. A tiara for the winner. And a chance for people with HIV to speak out despite the stigma they face. 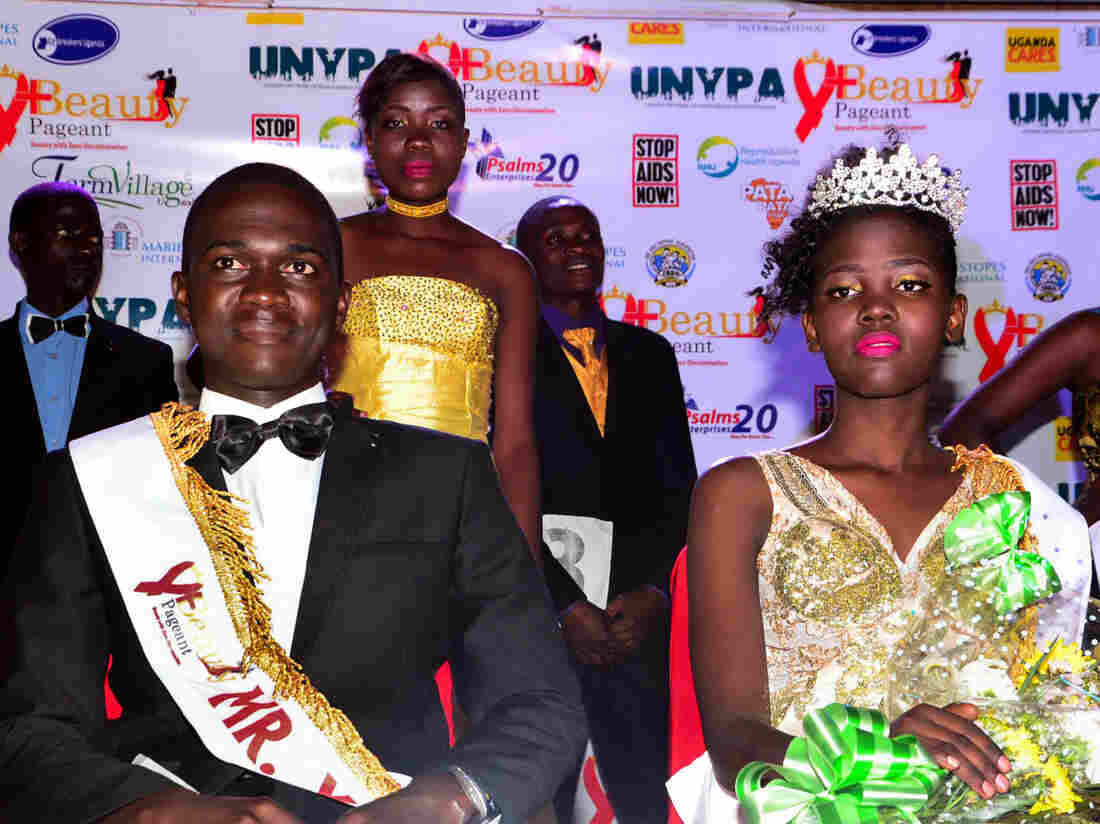 It had all the trappings of a typical beauty contest: Contestants in evening gowns strutting before the judges, a talent portion, and of course, a sparkly tiara for the winning lady.

But the third annual Y+ Beauty pageant held in Kampala, Uganda, this past weekend also had some unusual features. All of the more than 150 competitors were HIV positive — the Y+ stands for "young person living with HIV/AIDS." Also, many of the participants were men — along with a Miss Y+ they crowned a Mr. Y+. Most important, says the organizer, Jacquelyne Alesi, however dashing the two winners happen to be, they were actually picked based on their "inner beauty." 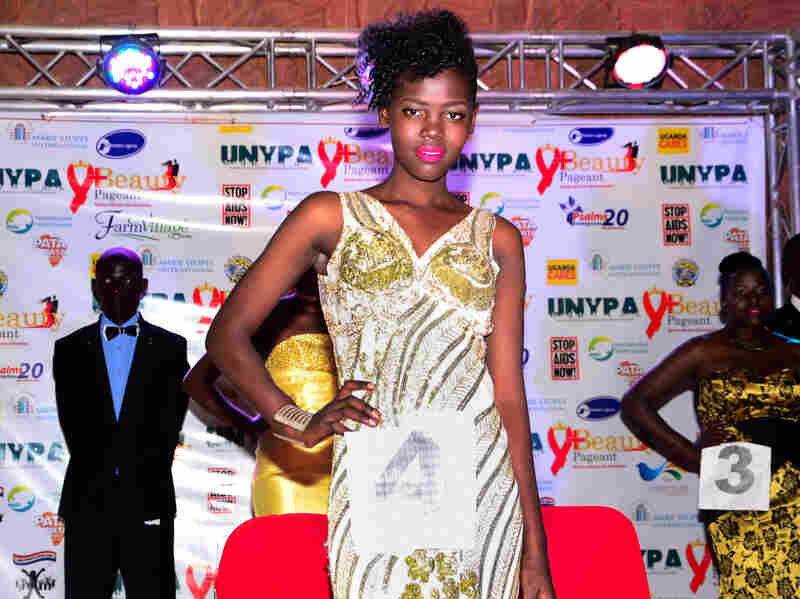 Tryphena Natukunda, 18, won her title in a field of more than 150 contestants. Courtesy of Jacquelyne Alesi/UNYPA hide caption 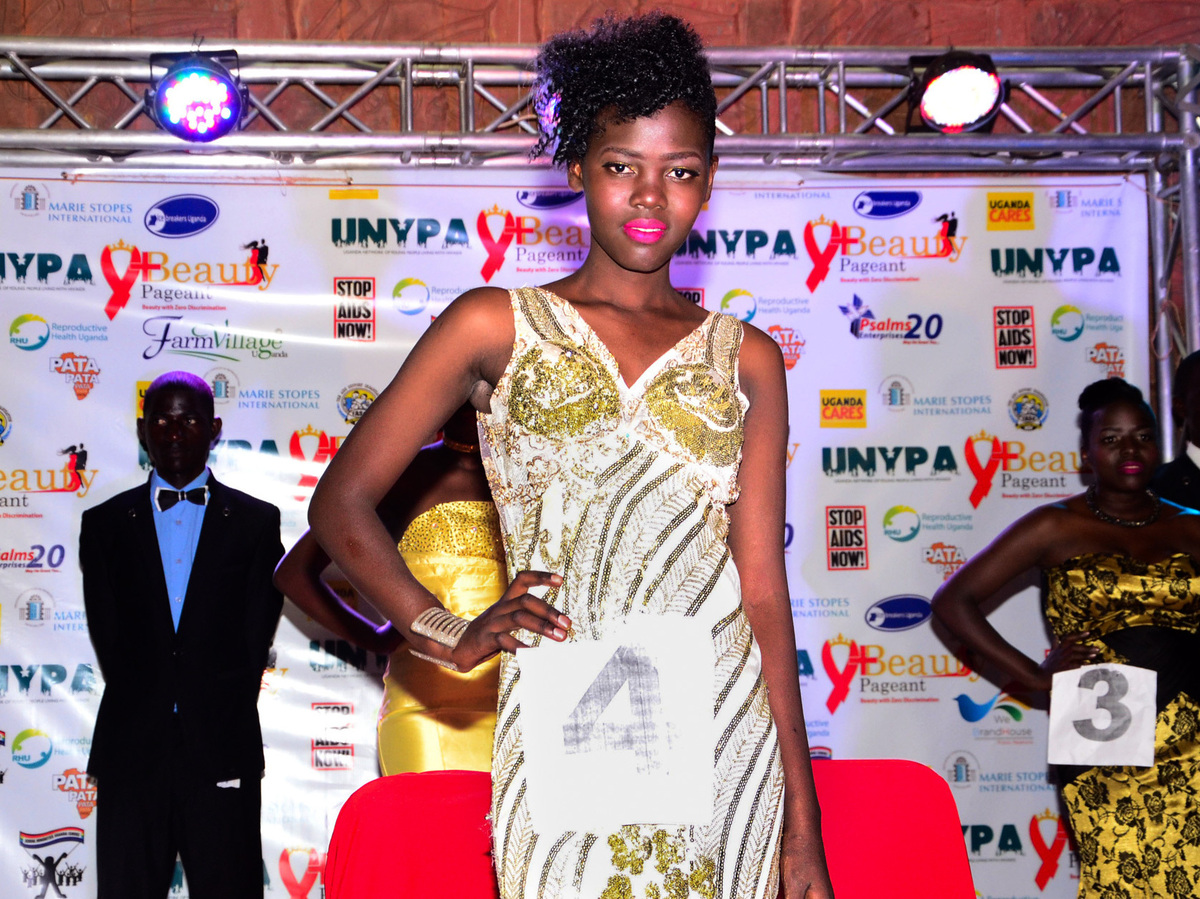 Tryphena Natukunda, 18, won her title in a field of more than 150 contestants.

"We're not looking for whether you have a nice figure or a nice shirt or the beauty of your face," says Alesi, executive director of an advocacy group called Uganda Network of Young People Living with HIV&AIDS, or UNYPA. "We're looking for ambassadors to help us fight the stigma around AIDS."

This stigma risks holding back not just individuals but Uganda's economy as a whole, adds Alesi. One out of 14 Ugandan adults is currently living with HIV/AIDS. And while well over half of those infected are on medications that can keep them not just alive but healthy, Alesi says many still face discrimination by potential employers.

Alesi, who is HIV positive herself, recalls the reaction about three years ago when she disclosed her status during a job interview. She was up for a marketing position. After the interviewers told her they thought she was well-qualified, Alesi said she might require an occasional sick day because she was HIV-positive and would need the time off to get her medication.

"The way they looked at me! Everything changed," she says. "Immediately they started asking me, 'Why didn't you tell us right away? You should have put that in your CV!"

Alesi was so put off she withdrew herself from consideration. "I had to show them that I'm an empowered person — that I don't need to be stigmatized," she says.

PHOTOS: Handing Over The Camera To People With HIV

Determined to help HIV positive people speak out against such attitudes, Alesi joined UNYPA soon after. She even arranged to do a training session at the company where she had applied for the marketing job. "They recognized their mistake and apologized, and I forgave them," she says.

UNYPA's principal mission is to reach out to young adults. Two years ago Alesi was searching for a better way to do so when she thought, "a pageant!"

"Everybody pays attention to a pageant," she says laughing. "Not just in Uganda but worldwide."

Her instincts have paid off. The first year that UNYPA held the contest only 10 people competed.

Last year that number grew to 78. This year the number roughly doubled.

They were recruited from health centers all over Uganda to participate in special "auditions" held earlier in the year in the capital and various districts. The auditions are essentially regional pageants to select semi-finalists for the national contest. But the true purpose is to bring together as many HIV-positive young adults as possible for a day-long information and hangout session.

During talks and discussions in between the pageant rituals, UNYPA staffers try to dispel myths. For example, says Alesi, a lot of HIV-positive youngsters mistakenly believe the daily pills they're getting against AIDS also protects them from pregnancy or sexually transmitted diseases.

Alesi says there's also tremendous value to simply introducing so many HIV-positive young adults to one another. There's such a taboo against revealing your status that many don't realize how common their situation is.

"They think they are the only ones living with this," she says. "So they basically start stigmatizing themselves" — shying away from social activities or work opportunities because they feel depressed or afraid they'll be outed and made fun of.

That's also why the 45 semi-finalists who are selected through the regional auditions are then sent to a week-long farming "boot camp" in the countryside. They're given lessons on how to start small agricultural enterprises such as raising a few cows, or trees that can earn them a little money. The hope, says Alesi, is not just to give the participants practical skills but to prove to them that there's no reason they can't be self-sufficient. "We want to give the courage to feel that just like any other young person they can earn money by working hard."

Many have been dealing with feelings of inadequacy or isolation since childhood, she adds. This year's Mr. Y+ — 24-year-old Henry Kirabira — was born HIV-positive. Kirabira, who grew up in the capital, had no idea he was infected until he was 13. He started suffering recurring bouts of sickness — high fever, rashes, and a debilitating cough that was repeatedly diagnosed as tuberculosis. "It was really affecting my education — I used to be in bed on a monthly basis," he says. So health workers finally recommended that he get tested for HIV.

The results sent him into shock. "For an entire month I was like, 'I'm going to die — and being a young boy, that was so painful.'"

Those fears dissipated when he realized the antiretroviral drugs he was put on were restoring his health. But then Kirabira had a new problem: keeping his secret from classmates at his boarding school.

Every time the nurse would dispense Kirabira's medication to him, he says, the other students would get suspicious. "They would say, 'What is all that for?'

He tried telling them it was for stomach trouble. But the other kids soon figured out the truth. After that, Kirabira says, they taunted him, or, just as hurtful, avoided him.

Kirabira, who graduated from college with a degree in social work, says he at least hasn't faced job discrimination. But that's because he's working for his family — he manages a small restaurant owned by his mother.

And it wasn't until two years ago that he felt ready to go public with his HIV status. Staffers at the health clinic where he gets his medication were encouraging him to speak at community gatherings, he explains. He also felt emboldened by the example of two prominent Ugandan celebrities who had revealed their status: the singer Philly Bongoley Lutaaya and dancer/DJ/radio personality Moses Nsubuga. Then there was the news that Kirabira's viral load — meaning the amount of HIV circulating in his system — had dropped to an undetectable level. "I'm living with [HIV] and I have a successful life," he says. "So I felt like I could give hope to others."

While other contestants displayed more traditional talents during that portion of the competition — singing and reciting poetry for instance — Kirabira won the judges over with a motivational speech about overcoming HIV/AIDS stigma. He also nailed the most important hurdle in the contest — an extensive interview with the judges. His prize will be a scholarship to the education program of his choice. Kirabira, who currently volunteers as a youth coordinator with a group that helps people in refugee camps, is still sorting out the details. But he thinks he'll use the scholarship to take a university course that would qualify him as an HIV/AIDS counselor.

Now that his victory as Mr. Y+ has propelled him to prominence he has noticed some whispering in the neighborhood. When he walks around, he says, "You know, I'll hear that people are saying, 'Oh that guy is HIV positive.'"

"But I don't mind what they're saying," he adds. "I've overcome this stigma. And know I'm not alone."