Accessibility links
A Nigerian Nurse Wants To Show Scenes Of Happiness On Her Instagram Feed #bitsofborno : Goats and Soda She's Fati Abubakar and she takes pictures for her Instagram feed, bitsofborno, showing how life goes on in a region best known for ties to Boko Haram. 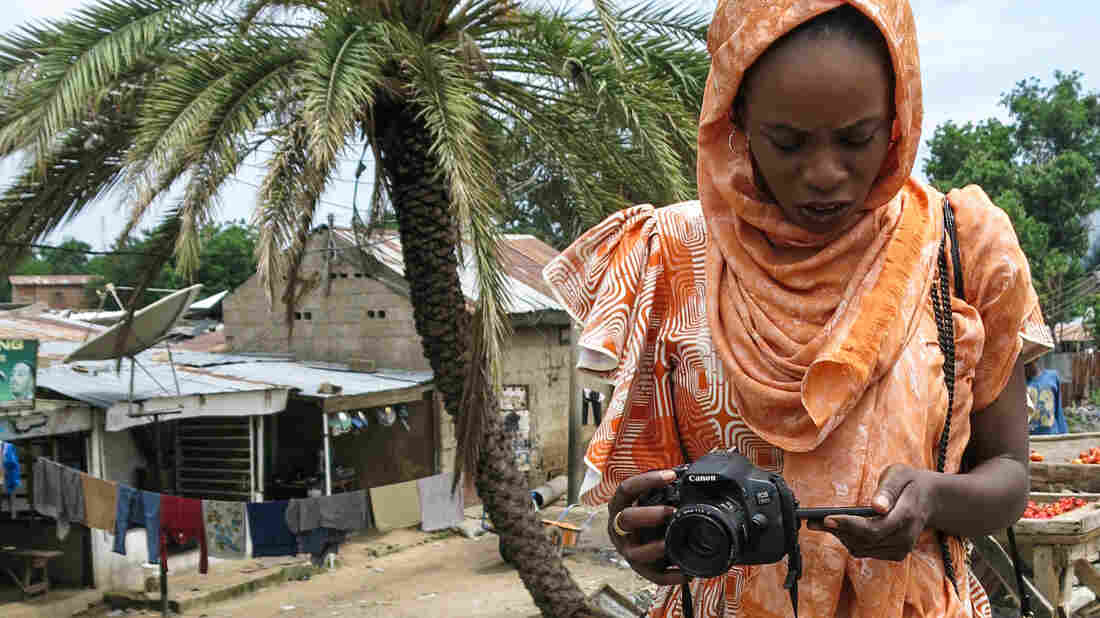 Fati Abubakar takes her camera and goes searching for bitsofborno â people who show how life goes on in the troubled northeast of Nigeria. Ofeibea Quist-Arcton/NPR hide caption 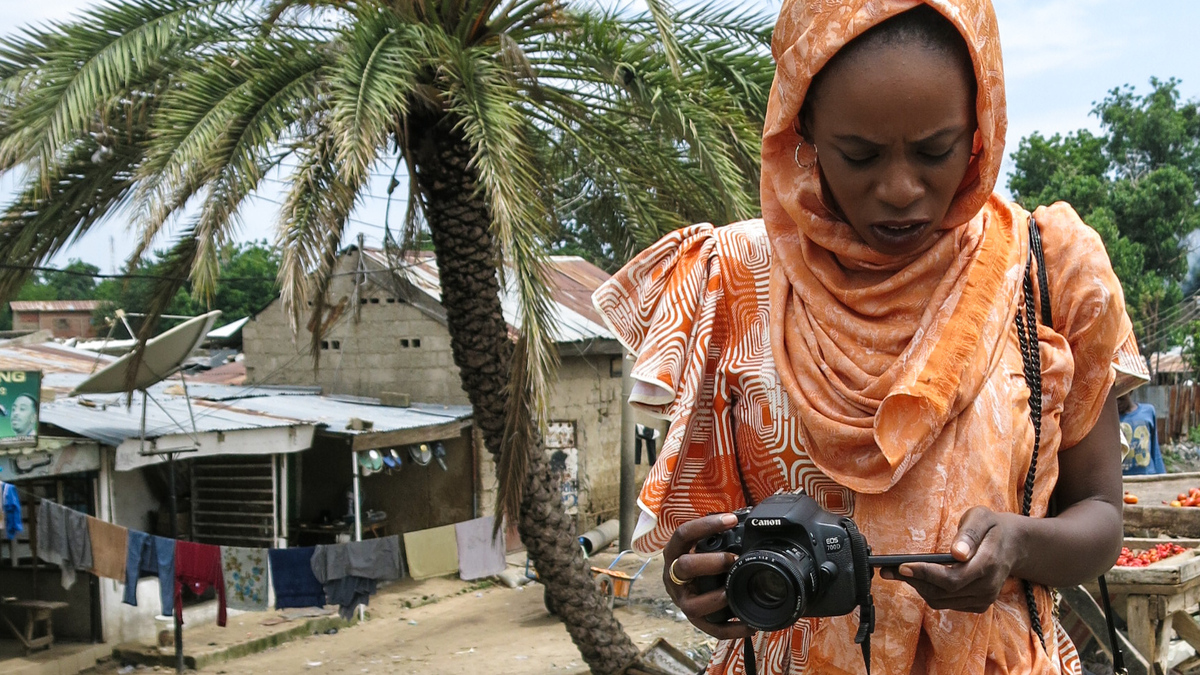 Fati Abubakar takes her camera and goes searching for bitsofborno â people who show how life goes on in the troubled northeast of Nigeria.

She wants to take pictures of happiness.

That's one of the goals that Fati Abubakar set when she started her Instagram feed bitsofborno last year.

Borno is a state in the troubled northeast of Nigeria, where the extremist group Boko Haram began operating. The capital city, Maiduguri, birthplace of the insurgency, is where this 30-year-old nurse lives and works as a project manager for a malnutrition project as well as a documentary photographer.

Abubakar had been feeling frustrated that her home region is best known for its ties to Boko Haram. So in 2015, she decided to do something about it. She started taking pictures of the daily life that she says local and international media neglect as they focus on bomb blasts, suicide attacks, death and destruction — and the fallout from Boko Haram's violence.

She photographs and profiles random regular folk of all ages, from all walks of life, then pulls out her notebook to record their views, posting pictures and text online.

With her camera slung over her shoulder, she heads onto the streets of Maiduguri and beyond, her colorful long dress trailing in the dust. She'll squat and lean perilously close to railings to take a picture, with a three-foot drop into a trash dump just behind her. I interviewed Abubakar at work on the hoof, in a bustling roadside Maiduguri market. The interview has been edited for length and clarity.

Tell us about bitsofborno. Why that name?

I decided bitsofborno, because I'm showing bits and pieces of Borno state. I wanted [to] document everyday life — individuals living in the community and still thriving and having businesses.

I felt mainstream media hadn't focused on the rest of the population. It was just the internally displaced — and it was just mostly bomb blasts, death and destruction. And Boko Haram.

They have failed to see that there's life, even in adversity. And that is what my page tries to capture.

Which came first? Photography or bitsofborno?

I always had a fascination with cameras. I took classes, and I take photographs wherever I go. But after coming back to Borno in May 2015 from school, I wanted to use photography to highlight the issues in my community.

Who do you choose to take pictures of? I just saw you pursuing a gorgeously-dressed older man.

I really love cultural attire. I like when I see people who don't really conform with Western dressing. I like very traditional Borno state dressing — the babarigas as they call it. That's the flowing robe. And then the traditional Kanuri caps, the Borno caps that are well known now — embroidered, handmade, very intricate designs. They're very beautiful. When I see very traditional things, I try to stop people and I document them.

I try to persuade them sometimes. So that's why I was following [the older gentleman] around, but he seemed very unresponsive, so I move onto the next one.

You take a lot of photos of children.

I love children. They are very happy. Whatever is going on in town [they are] sometimes unaware of it.

'I prefer living in my village in Banki' Hauwa

In terms of the bomb blasts and devastation. Children might see it happening and, in the next one hour or two, they're fine, they're back to play.

So I like to see that transition. I like to document happiness, so I gravitate toward children. I look for a lot of happy stories because our image is very bad, so we would like to show that life still goes on.

And what about some of the sadder moments?

Positive is what I'm currently focusing on but I started with the good, the bad and the ugly. Constantly you get those stories of trauma and death. I still document those as well, because the stories have to be told.

What makes you happy? You're smiling.

Children make me happy. And I like markets. They are very vibrant and a sign that the city is still alive.

Tell us about the Borno you grew up in and the Borno you came back to in 2015 after studying for a master's degree in public health in Britain.

The Borno I grew up in — this city Maiduguri — was a quiet, peaceful town, a lovely, close-knit community, known for its diversity. We had people from all over Nigeria. It was the center of commerce, I would say, in the northeast. We [border] Cameroon and Chad and Niger. Maiduguri was known for its hospitality. We were famous for our hand-embroidered Borno caps, flamboyant weddings and our pride in our colorful tradition.

People were happy. We trusted our neighbors and it was very peaceful. Borno was called "home of peace."

But the Borno I came back to, I would say the whole community is devastated. The whole community looks traumatized. There were strangers everywhere, new faces from the villages. All the friends I had from my childhood had moved on. A lot has changed. Everyone told harrowing stories of loss. Despite all that, I sensed resilience. People were picking up the pieces of their lives and moving on, which is what I felt wasn't being showcased. The response to my pictures on Instagram, the fact that people were shocked there was still life here, was what made me decide to create a page specifically for Borno.

I felt that I needed to get away for a while and learn, get the knowledge that I felt would help me when I came back. I told my mother that I really want to go and try a master's. I really wanted to go into community health. So she said, why don't you go abroad, maybe it will do well for you?

How are you viewed here? Here you are, this slender young woman, Fati Abubakar, in a long orange and white print dress, with your head covered in a beautiful orange scarf – and carrying a camera. It's not an everyday sight, is it, in Borno?

No, it's a very unconventional, I would even say rebellious way of life, because that's not the traditional Kanuri [majority tribe of Borno state] woman everybody expects. Everybody wants you to be married, with children, living a very obedient wife lifestyle.

And if that is not what you are, I think this society kind of frowns upon you and they constantly remind you of the need to get married and have children and just follow the template that is laid out for you.

Among the groups, dressed in matching clothes, that frequent the Sanda Kyarimi zoo during #Eid holidays, there's a hierarchy. The 'chairman' leads and is the only who uses the umbrella to protect from the #Maiduguri sun and the members tag behind. Its an unwritten rule. #photography #photojournalist #documentaryphotojournalism #dynamicafrica #theafricathemedianevershowsyou #everydaystories #everydayafrica #natgeo #magnum #opensocietyfoundations #aljazeera #aj #lensculture

And may I ask: are you married and are you a mother?

So would it be correct to say you're not conforming to your society's expectations?

You get the occasional look of disapproval. But as time goes on, people are seeing what the page is doing, the impact and how the images years from now will be invaluable to this state, they are becoming well aware that photography is an essential art form that we need to incorporate into our society.

And they no longer see gender — which I'm happy about. I would say [bitsofborno] is not only changing the narrative of our state, but it's also having this traditional town question the role of the woman.

You are daily documenting the life of Borno state.

Yes, I'm chronicling every bit and piece of Borno state as I can at the moment. Fifty years from now, people will wonder what happened during Boko Haram. I think it's imperative that we have those images to show those generations that this is what happened to your grandparents.