Accessibility links
Doctor Who Treats Rape Survivors Is Regarded As A Nobel Peace Prize Contender : Goats and Soda Dr. Denis Mukwege opened a hospital in Eastern Congo to help women give birth safely. His first patient was a rape survivor. And she changed his life. 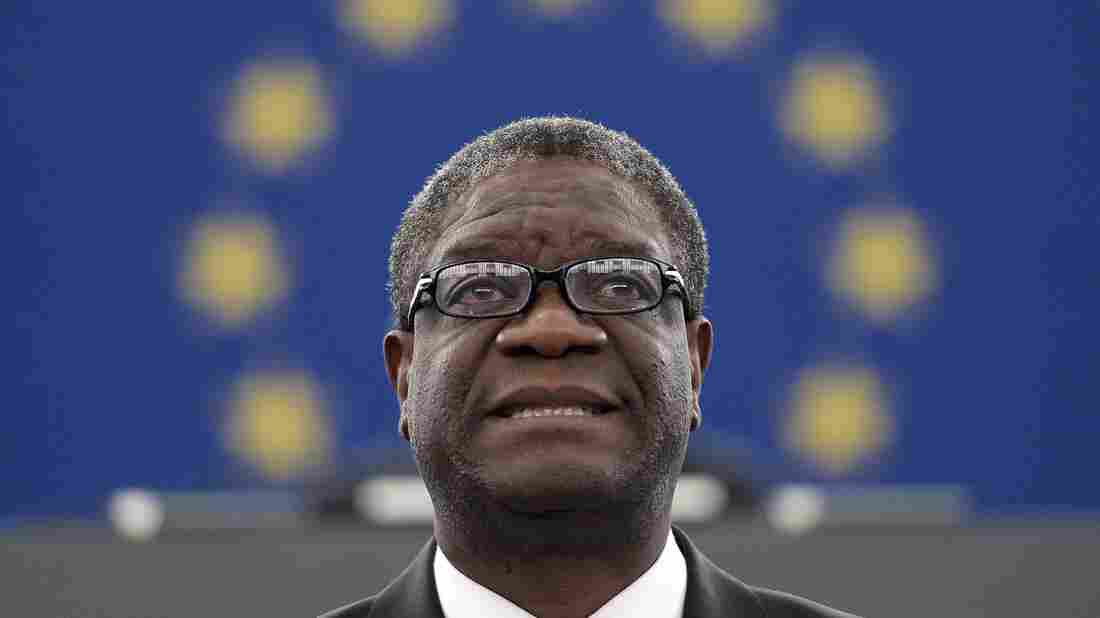 Dr. Denis Mukwege, a gynecologist in the Democratic Republic of Congo, treats victims of rape, tending to physical and emotional needs. For the past several years he has been considered a strong contender for the Nobel Peace Prize along with two women from Congo who aid victims of sexual violence. Frederick Florin/AFP/Getty Images hide caption

That is the number of rape survivors treated by Dr. Denis Mukwege and his associates at Panzi Hospital between 1999 and 2015. Some 35,000 of those survivors, who range in age from toddlers to seniors, suffered complex gynecological injuries, inflicted by members of rebel groups and the Congolese military.

Mukwege, who for the past several years has been considered a strong candidate for the Nobel Peace Prize, began his career as a gynecologist wanting to help the women of the Democratic Republic of Congo, his homeland.

When he opened Panzi Hospital in 1999, he envisioned it as means to improve the maternal mortality rates in Bukavu, the capital of Eastern Congo, where about 1 in 100 women died during childbirth. "But our first patient did not come to deliver a baby," the 61-year-old gynecologist explained in a speech he gave on Thursday accepting the Seoul Peace Prize in Korea. "She had been raped with extreme violence."

That rape patient set in motion a new course for the doctor's life. The hospital has grown into an international foundation that helps rape victims work through the physical, emotional and spiritual trauma through a tailored healing process.

This healing process goes behind surgery and therapy. The Panzi healing model is a five-pillar process.

"What I'm doing really is not only to treat women — their body," says Mukwege, "[but] also to fight for their own right, to bring them to be autonomous, and, of course, to support them psychologically. And all of this is a process of healing so women can regain their dignity."

Part of this approach comes from Mukwege's realizations about the nature of the trauma of rape. "When it happens in the life of a woman to be raped, sometime you have an impression that it was 'just a rape,' as some people who don't understand the meaning of rape [say]," explains Mukwege. "But we understand that it's a very deep trauma and women need to regain confidence in themselves."

The five pillars of the Panzi model are medical treatment, psychosocial therapy, socioeconomic support and training, community reintegration and legal assistance. "Once you get through your psychosocial and medical healing," explains Elizabeth Blackney, Panzi Foundation's media and communications director, "you move on and work with our socioeconomic pillar [to] learn literacy and numeracy and education. [The women] have a safe space to learn vocational skills. And then we of course provide legal aid and assistance to help people get justice."

While Mukwege was known in international circles for years — he has collected many humanitarian awards — popular knowledge of his work has come through The Man Who Mends Women: The Wrath of Hippocrates, an award-winning documentary that was shown this year at the Africa Diaspora International Film Festival.

The film, by Thierry Michel and Colette Braeckman, focuses on issues of physical healing and justice. It also paints a stark picture of the landscape around Bukavu and Panzi Hospital, visiting villages and jungles where the afterlife of the Second Congo War still rages.

The film, which was banned by the government of the DRC, raises the voices of the Congolese women, who often have no place in the international dialogue. Their words help convey the depth of the trauma. They also reveal the depth of humanity and care in the doctor's work. "I felt love for him and myself again," one woman says in a scene.

One woman says, "He touched my urine, my feces."

"We call him the messiah," says another.

Mukwege himself has faced dangers because of his work. In September 2012 he gave a speech decrying the horror of mass rape in Congo to the U.N. A month later, gunmen invaded his home and attempted to kill him, his wife and their two daughters. His guard intervened. During the ensuing shootout, the doctor and his family played dead. He left Congo shortly thereafter but the women of Eastern Congo sold their harvest to pay for his plane ticket home.

"After that gesture, I couldn't really say no," Mukwege told the BBC. He returned to a hero's welcome in 2013. "And also, I am myself determined to help fight these atrocities, this violence," he said. "My life has had to change, since returning. I now live at the hospital and I take a number of security precautions, so I have lost some of my freedom."

He is fighting against rebel militias, his own government, against some of the worst imaginable physical and mental trauma imaginable, against images that would destroy most of us. But when I ask him, and other members of his staff, how he keeps fighting, the answer is always the same: "Because we have to."

A previous version of this post stated that Dr. Denis Mukwege was nominated for the Nobel Peace Prize. In fact, the Nobel committee does not release the names of nominees for 50 years. Mukwege has been considered a strong contender for the prize for the past several years.