What If 'Days Of Our Lives' Had A Female Genital Mutilation Subplot?

What If 'Days Of Our Lives' Had A Female Genital Mutilation Subplot? 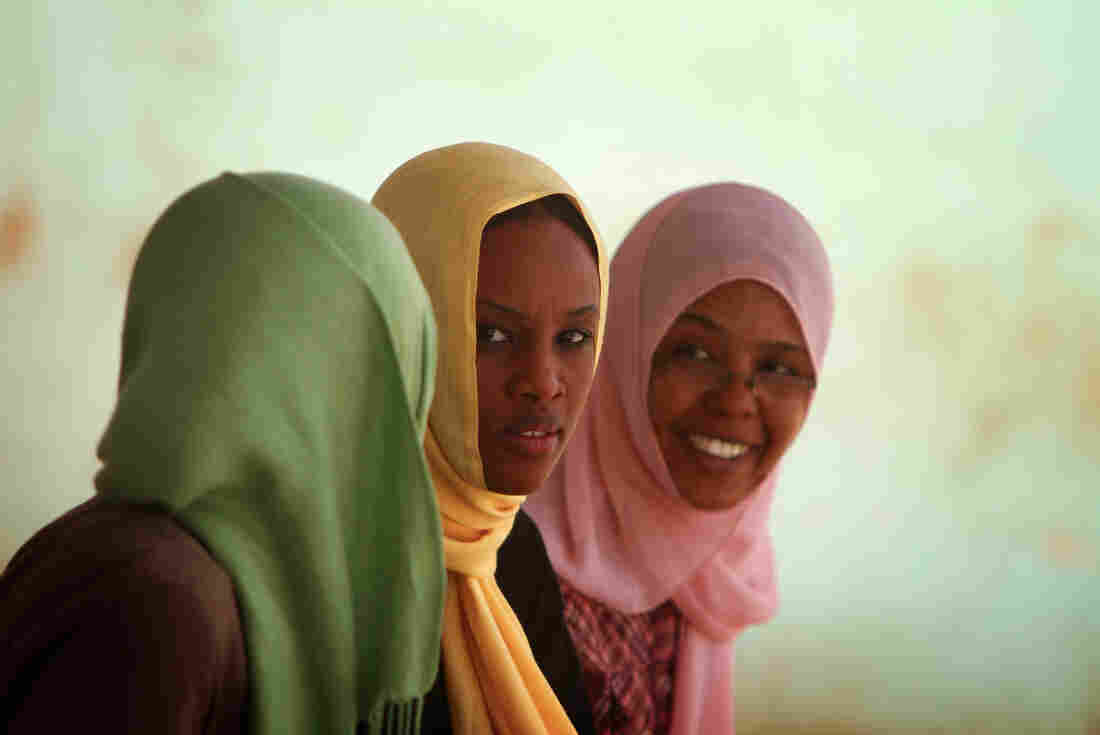 Students in Khartoum, Sudan. Researchers made a movie, set in the country, with a subplot intended to change views about the practice of female genital mutilation. Patrick Baz/AFP/Getty Images hide caption 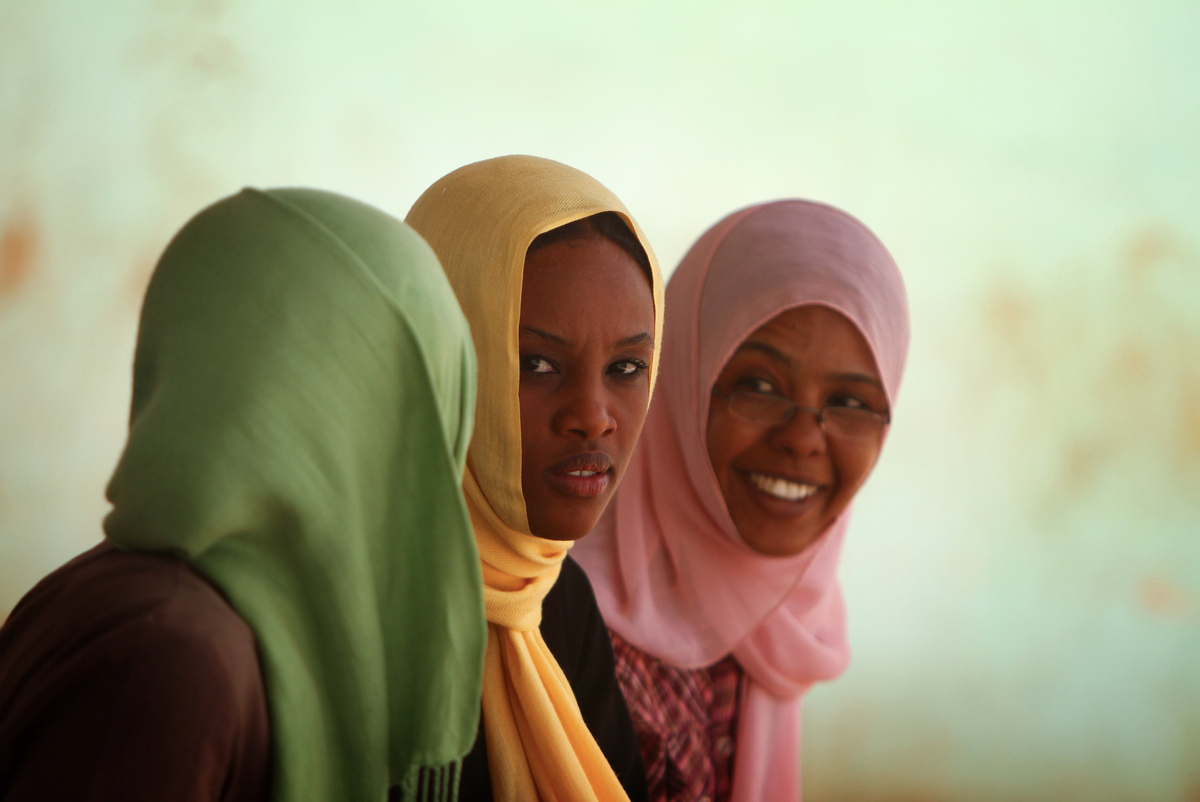 Students in Khartoum, Sudan. Researchers made a movie, set in the country, with a subplot intended to change views about the practice of female genital mutilation.

It sounds like a typical melodrama of a movie — a saga about a big family with issues galore. There's the widowed grandfather who desperately misses his wife. The sensitive younger son who dreams of being a musician. And the daughter who's dipping into the family's stash of cash to pay a con artist who pretends to be a faith healer.

But those aren't the only plotlines in The Yard. The 90-minute Sudanese film devotes about a third of its running time to the issue of female genital mutilation. In fact, that's why the movie was made in the first place — it was commissioned for an unusual scientific study on what it might take to change attitudes about female genital mutilation, or FGM.

An estimated 200 million girls and women worldwide have been subjected to the ritual, in which part of the clitoris and sometimes the labia is cut away. In cultures that practice it, including across Sudan, FGM is considered a rite a passage — a way to ensure that a woman remains chaste by eliminating her potential for sexual pleasure. But the psychological and health consequences can be severe — including not just the dangers of the procedure itself but complications throughout a woman's life. 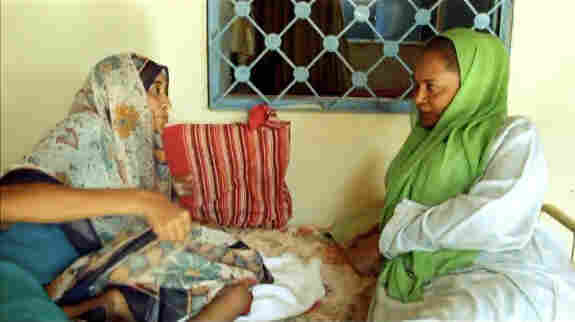 A scene from The Yard, in which characters talk about all kinds of things – including whether or not to continue the practice of genital cutting with their daughters. Courtesy of UNICEF hide caption 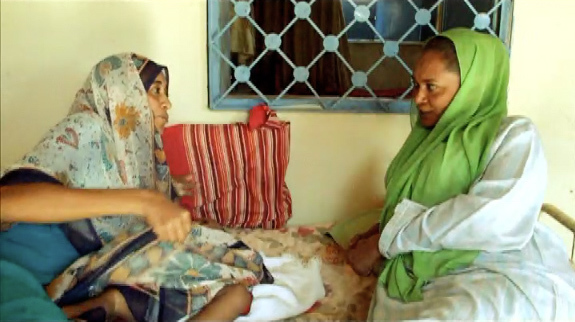 A scene from The Yard, in which characters talk about all kinds of things – including whether or not to continue the practice of genital cutting with their daughters.

For years, human rights advocates have been campaigning to end the practice with only limited success. A major obstacle is that they're often written off as outsiders trying to impose an alien "Western" perspective.

But movies like The Yard could be key to getting around that problem according to findings from the study, just out in the journal Nature.

The authors of the study — three economists from the University of Zurich and two researchers from Sudan — were inspired by earlier studies showing an unexpected finding: Even in places where FGM is common, opinions vary about whether it's a good idea, not just house-by-house but even person-to-person within the same family.

"This is quite a dynamic thing. People have changing attitudes," says Sonja Vogt, one of the economists. "And most of the variation is at the household level." 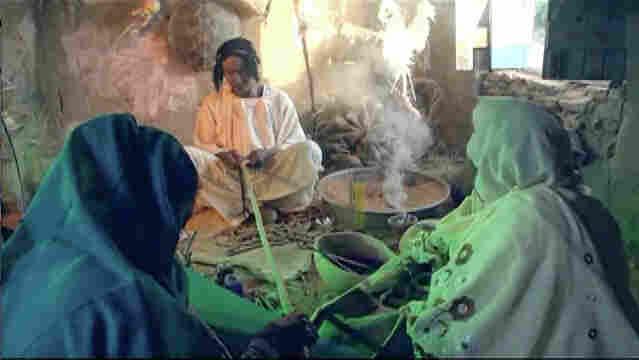 The Yard features plotlines that have nothing to do with FGM. Above, a con artist (center) pretends to be a healer. Courtesy of UNICEF hide caption

There's also a growing body of social science research showing the potential impact of movies and television on attitudes in poor countries about all manner of social issues. All of which caused Vogt and her colleagues to wonder: What if you made an entertaining movie in which recognizable, relatable characters disagree about whether to cut their daughters and then ultimately decide not to. How would viewers react?

If there are people in a community who don't support FGM, then it's not necessary to bring in outsiders to preach that the ritual is unhealthy, says Vogt. Instead, she says, you simply show characters in a film expressing the points that people might hear within their own family.

To test this approach, the researchers launched themselves into the unfamiliar world of Sudanese cinema. They felt it was crucial for their Arabic-language movie to be entertaining. With funding from UNICEF, they enlisted the services of an established Sudanese playwright and director. But they also needed his script to adhere to strict requirements of their experiment.

"For a writer you might imagine that was a very unusual experience," recalls co-author Charles Efferson, with a laugh. "He wasn't used to that kind of thing being controlled. So it required a lot of negotiation."

#LongReads: Blame It On Bollywood

The resulting subplot on FGM takes up 27 minutes of the film. In a seminal scene, a group of women sit in the courtyard of the family's compound — hence the movie's name The Yard. They're painting henna onto one another's hands and chatting cheerfully. Then the sensitive subject of female genital cutting comes up. One woman announces she'll probably continue the practice with her daughter. It's harder to find a husband for a girl who hasn't been cut, she notes. Besides, she says, cutting a girl ensures she'll develop good moral character. The woman's sister-in-law has her doubts. What about all the health risks, she asks.

Vogt says even though some of the characters in the movie are clearly villains — most prominently the con artist — it was crucial for all the characters who were speaking out in favor of FGM to be sympathetic.

If you're trying to influence viewers of the movie who support FGM, she explains, first you need to create a sympathetic character they can identify with — and one who shares their positive view of the ritual. "Then as this character starts questioning [FGM] the hope is that the viewer maybe moves with that character," she says.

For instance, one of the women in the movie points out that a certain teenage girl they all know who was cut as a child has good morals. Others agree. But then they suggest that perhaps the girl is so well-behaved because her own mother raised her well. In other words, cutting had nothing to do with it.

The scientists felt it was important to show that husbands and wives can discuss whether to cut their daughters. This type of explicit conversation between the sexes was considered a bit too risque by Sudanese standards. So instead the researchers opted for a scene in which one man mentions he has just been talking about the ritual with his wife.

Another challenge the movie addressed is how to bridge the gap between generations. For instance, after the younger characters conclude that they don't want to cut the girls in the family, they worry about telling the grandfather. Early in the movie he stands on a stool to help a grandkid get a fruit out of a tree, only to fall and break his arm. So his children don't want to upset him in his fragile state. Finally a family friend volunteers to speak to the grandfather. In the last scene the old man tells everyone he's fine with ending the practice — and he's sure his cherished late wife would agree. Back in the day, he says, she approved of retiring another once common-Sudanese practice — cutting a woman's cheeks to make decorative scars.

The researchers produced three versions of the film in which different arguments against FGM were brought up — as well as a "control" version with no discussions about cutting.

Their finding: The film really did make a difference. They showed the movie to nearly 8,000 people, then used a test to measure whether viewers had positive or negative feelings toward girls who have not undergone FGM. Of the viewers who were shown a version of the film with an FGM subplot, 73 percent had a relatively positive view of an uncut girl compared to only 35 percent of those who saw the control version.

"It's fair to say I was surprised," Efferson says. "I mean bear in mind, there was only 27 minutes of content about [FGM] here."

But the impact did not last. A different test measured people's reactions one week out — and the effects were considerably diminished.

But Efferson is not deterred. He says this just means the answer might lie not in a movie but in a television-style soap program. That way, the message is delivered on a weekly basis.