Accessibility links
Many Ugandans Are Offended By Music Video That Luket Ministries Made About Their Work In Uganda : Goats and Soda Luket Ministries filmed a video in which seven white women depict the Ugandan way of life. Then came the uproar — and the apology. Two Ugandan writers weigh in.

Why Many Ugandans Are Offended By Music Video Made By U.S. Missionaries

Why Many Ugandans Are Offended By Music Video Made By U.S. Missionaries 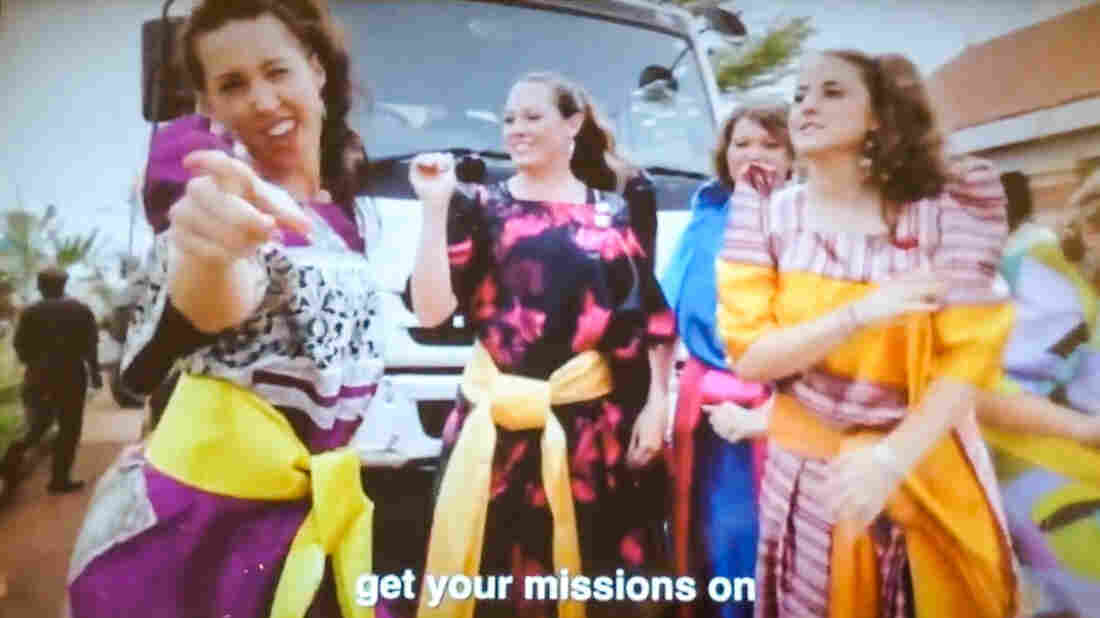 Dressed in Uganda-style garb, these women are featured in the video made by Luket Ministries, an Oklahoma-based missionary group that works in Eastern Uganda. YouTube hide caption

On October 14, Luket Ministries, an Oklahoma missionary group working in Eastern Uganda, released a music video that has caused quite a stir.

In the 5 minute, 13 second video, seven young white women are dressed in gomesi — the traditional and esteemed long dresses of the Baganda, a central Uganda ethnic group. The women dance to Justin Timberlake's "SexyBack" while a singer delivers a new set of lyrics. The theme is "I'm bringing missions back .... I'm out to serve God, it's my pact."

(Note: The video had been posted on YouTube but has since been taken down.)

Describing life in Uganda, the singer says, "You best deworm or get your money back, put up your net, mosquitoes will attack, bring in your laundry on your back." The seven women pretend to fetch water in yellow jerry cans and slash grass with machetes. They ride on motorbike taxis driven by Ugandan men.

The music video ends with a display of random statistics about poverty in Uganda — for example, 63 percent of the population lives on less than $2 a day — and a vague call to action: "Go. Get your missions on."

Natasha Perryman, co-founder of Luket Missionaries, is credited for the lyrics. She appears in the video eating sukumawiki (collard greens), a staple Ugandan dish.

We are both from Uganda, and we were offended by the video. In our view, it's outrageous to show seven white women offering an exaggerated depiction of the daily lives of Ugandans who are struggling to survive — even if the intent was to use humor to make people aware of issues in Uganda.

Luket Ministries has issued an apology on its Facebook page: "We respect and honor all cultures within our ministry and family. We apologize for promoting any view that would show otherwise." But we are still deeply troubled by the video, which is part of an unfortunate tradition of what some call the "white savior complex" — perpetuating the idea that only a white foreigner has the solution to the challenges facing Africa.

The stars of the video are the white women. We barely see any of the community members they claim to serve. When we do, they are voiceless, nameless and shown in stereotypical poses — for example, women bouncing young children on their backs. Which — it should be noted — is a purely practical way for African mothers to comfort, love and take care of their children while simultaneously working. It's hardly comical, as the video makes it seem.

The message in this video is that we are inferior. And the goofy portrayals of our customs, such as dancing around on a truck in highly respected traditional dress, strip us of our dignity.

From our perspective — shared by many Africans who've criticized the video on social media — the video is based on the idea that "the African" is to be pitied and saved and has no sophistication to solve the challenges facing our continent.

Foreign-led aid groups need to acknowledge that African-led organizations and local community members are aware of their issues and working to address them. And these outside groups can't be truly effective or sustainable unless they partner with local organizations, who understand the history and culture of their community.

And why did this group pick Uganda in the first place?

Uganda is a religiously diverse country: at least two-thirds Christian, roughly 10 to 15 percent Muslim and a remaining mix of traditional African religions, Hindus, Baha'is and Jews. Since Christianity takes a central role in Ugandan society, it's not surprising that evangelical groups come to offer help.

But in our opinion, it is the duty of these missionaries to understand the dynamic of power when white faces and foreign dollar bills arrive in our rural communities. In one scene from the video, the white women play with Ugandan babies. Did the video makers realize that a Ugandan mother might not feel empowered enough to tell their so-called saviors: "No thank you, I actually do not wish to have my beautiful baby paraded on your back in your YouTube video."

To be sure, there are a myriad of American-led aid organizations doing incredible work in Uganda — and working with our communities with respect to help solve intractable challenges such as poverty, lack of food and lack of access to quality health care and education and clean water, to mention a few. We know that the Luket Ministries video doesn't speak for such groups.

We hope that in the future, any group that claims to serve people "throughout the world" — that's how Luket Ministries describes its work — will respect the dignity of the people they serve. But sadly, we will not be holding our breath.

Viviane Rutabingwa is a public health professional with a focus on the uninsured and refugee health care. She is a Global Health Corps alumni and a founding member of A Place For Books. She tweets @Rootsi

James Kassaga Arinaitwe is the co-founder and CEO of Teach For Uganda. He's an Aspen Institute New Voices Fellow, a 2015 Global Fellow at Acumen and an alumnus of the Global Health Corps Fellowship. He tweets @Kassaga4UG.