Accessibility links
There's Another Side To Bush Meat That Doesn't Get Much Note: It's A Vital Food Source For The Poor : Goats and Soda The risk posed to mammals — and to public health — is well-documented. But for some people, bush meat is an important part of their daily diet.

There's Another Side To Bush Meat That Doesn't Get Much Attention

There's Another Side To Bush Meat That Doesn't Get Much Attention 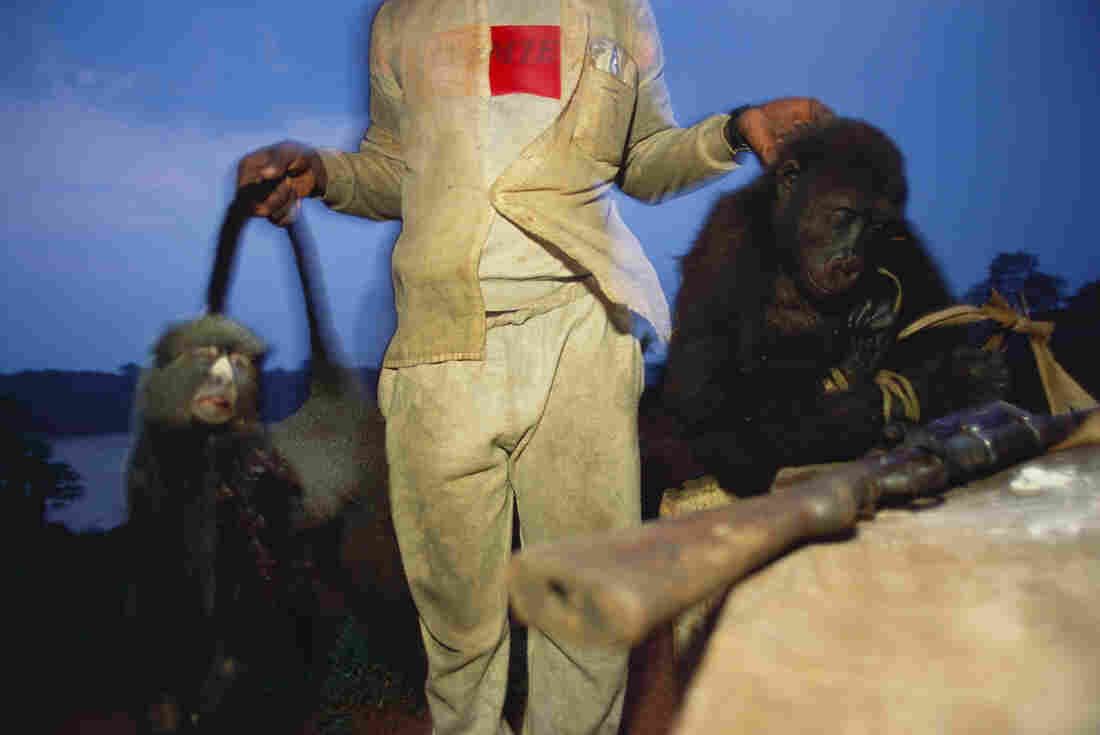 A man in the Congo displays two of the mammals he shot for dinner: a greater white-nosed monkey and a baby lowland gorilla. George Steinmetz/Getty Images hide caption 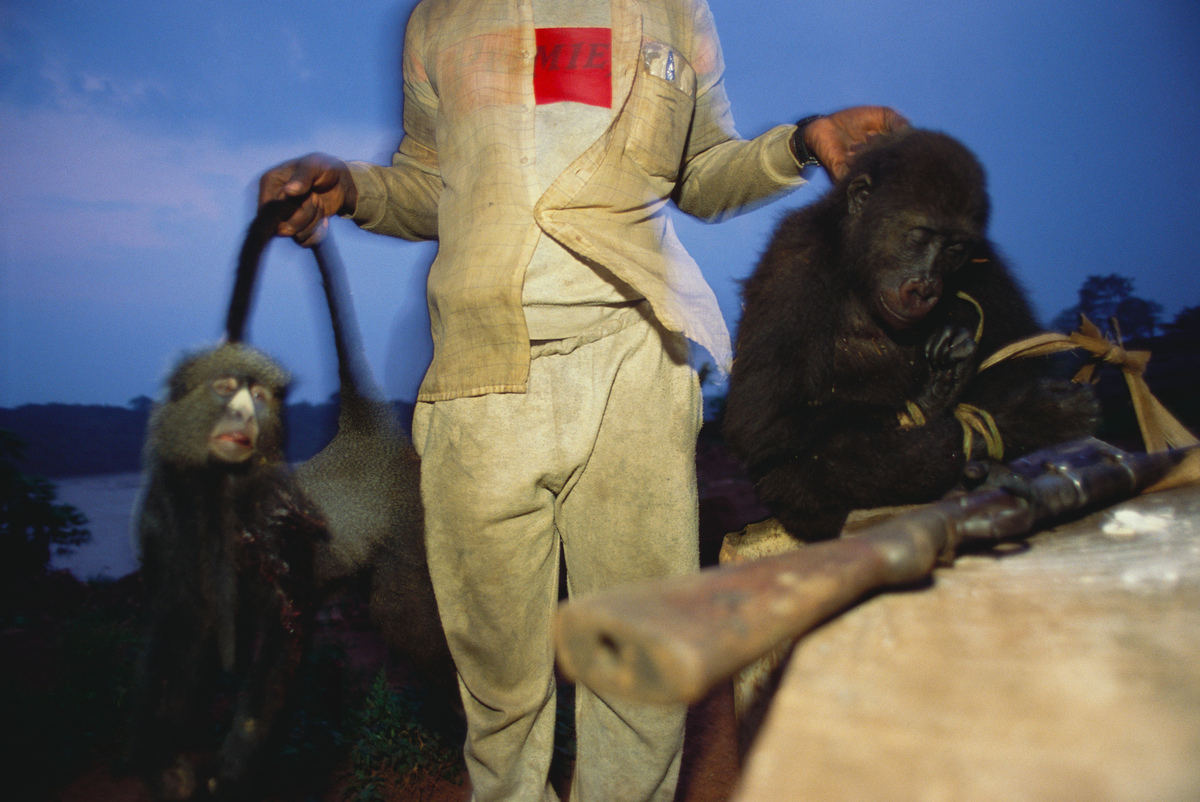 A man in the Congo displays two of the mammals he shot for dinner: a greater white-nosed monkey and a baby lowland gorilla.

Conservationists often discuss the fact that hunting bush meat in tropical areas is creating an ecological and public health crisis.

Though there's no tally of how much bush meat is hunted worldwide, a study published this month found that 301 species of mammals are at risk of going extinct from illegal hunting. In the Congo alone, between 1 million and 4.5 million tons of bush meat — wild animals like gorillas and endangered dukiers — are harvested each year. And public health officials warn that diseases like Ebola can jump to humans from contact with the blood and body fluids of wild animals.

But in many areas, overhunting bush meat doesn't just hurt the environment: It hurts the humans who rely on it, too. For a large number of people, particularly in rural central Africa, bush meat can be the primary protein source.

In the Congo, for example, other animal food sources cost money — and most plant sources of protein would need to be farmed, which isn't much of an option due to the rugged terrain.

"There are people who hunt food, share it with their family and neighbors, and when there is some left they sell it for a little money for other food, and things like soap and school fees," says forest ecologist Robert Nasi, who is deputy director of research at the Center for International Forestry research. Nasi says that their methods might be less damaging than the methods of professionals who hunt so they can sell large quantities of bush meat at markets.

He says they shoot whatever they can't trap — not only endangering whole species of animals but also depleting the supply of bush meat for those who depend on it as a food source.

In the Congo, bush meat makes up about 2 percent of meals in cities, where it's frequently eaten by choice and sometimes as a luxury. That may not seem like a lot, but urban populations are so high that cities are often the biggest consumers of bush meat. In rural areas, meanwhile, bush meat is often the only source of protein and can make up 60 to 70 percent of meals.

"When that wild meat disappears, we know that alternative sources of food just aren't there," says Fa.

The densely forested Congo isn't great for agriculture. Animals like cattle, pigs and chickens don't do well in the jungle, which is dense and harbors diseases that domesticated animals don't have resistance to. It's also expensive to clear areas for farming, and there's resistance from conservationists who worry about deforestation.

Scientists and nonprofit organizations have tried to encourage farming native species with little success. For example, much attention has been paid to attempts to farm grasscutters, large rodents that look like guinea pigs. But these efforts haven't met success in Congo.

"Grasscutters are a pest," says Nasi. "This is like trying to tell people to farm rats. They don't want to."

In Gabon, groups have tried to farm snails. But "a lot of people just don't want to eat snails," says John Poulsen, an assistant professor of tropical ecology at Duke University.

To start farming snails and grasscutters takes a certain amount of initial income that many people in these rural areas don't have. When groups come in and do trials, they use incentives to encourage the farming of these animals and provide the equipment and training to get started. But once the nonprofits leave — and the incentives are gone — it's easier and more cost effective to stop farming and hunt the animals in the forest.

Some researchers say that if the urban bush meat trade in the Congo was stopped, and subsistence hunters only hunted non-endangered species, the meat could be taken sustainably. This means researchers need to collaborate with the villagers. Poulsen has a project in Gabon that trains villagers as citizen scientists who help monitor wildlife around their homes.

Fa works on an even smaller scale — with individual families — to give guidance about which animals might be okay to hunt.

"There's every possibility to change minds when you work with people themselves," he says.

But there's no easy way to stop one type of hunting while protecting the other. Local laws aimed at curbing bush meat harvesting have little impact, in part because they're rarely enforced. Fa hopes that governments will instead target the urban bush meat markets and develop initiatives to reduce bush meat consumption.

"Even if only 2 percent of the food in Kinshasa is bush meat, that's still a hell of a lot of animal coming out of the forest," Fa says.

A previous version of this story misspelled John Poulsen's last name as Paulsen.