Accessibility links
Fleeing Boko Haram, Women In Nigerian Camps Report Sexual Abuse By Officials : Goats and Soda A report from Human Rights Watch details the sexual exploitation in camps for Nigerians who had fled their homes because of the conflict with Boko Haram. 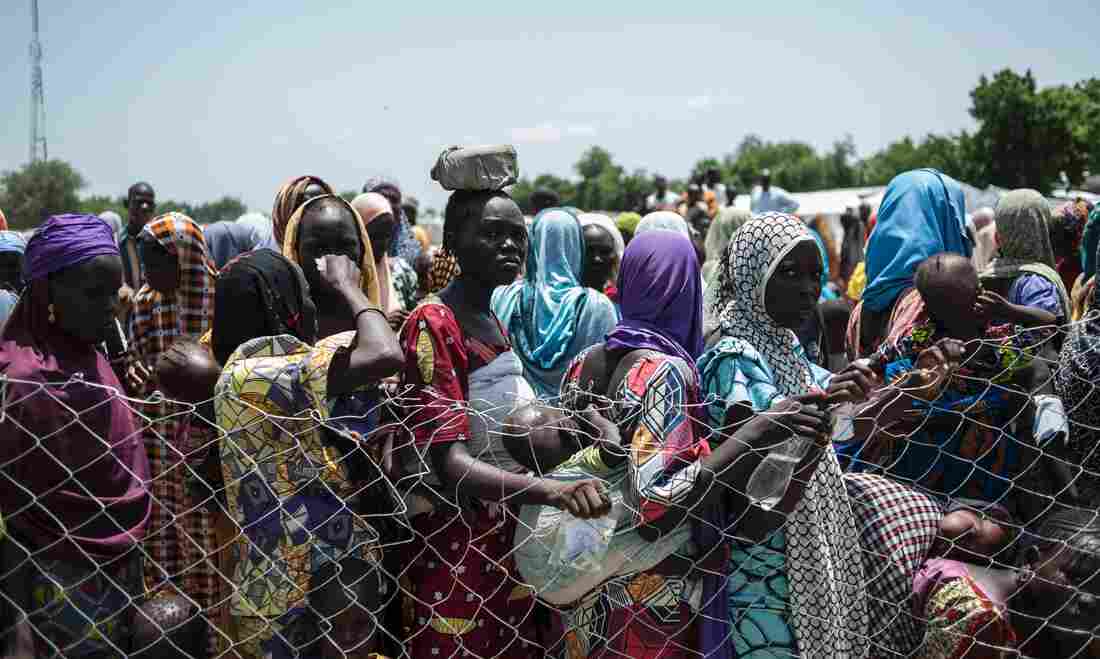 Women and children line up for food in one of the camps for displaced persons in Nigeria. The photo was taken on September 15, 2016. Stefan Heunis /AFP/Getty Images hide caption 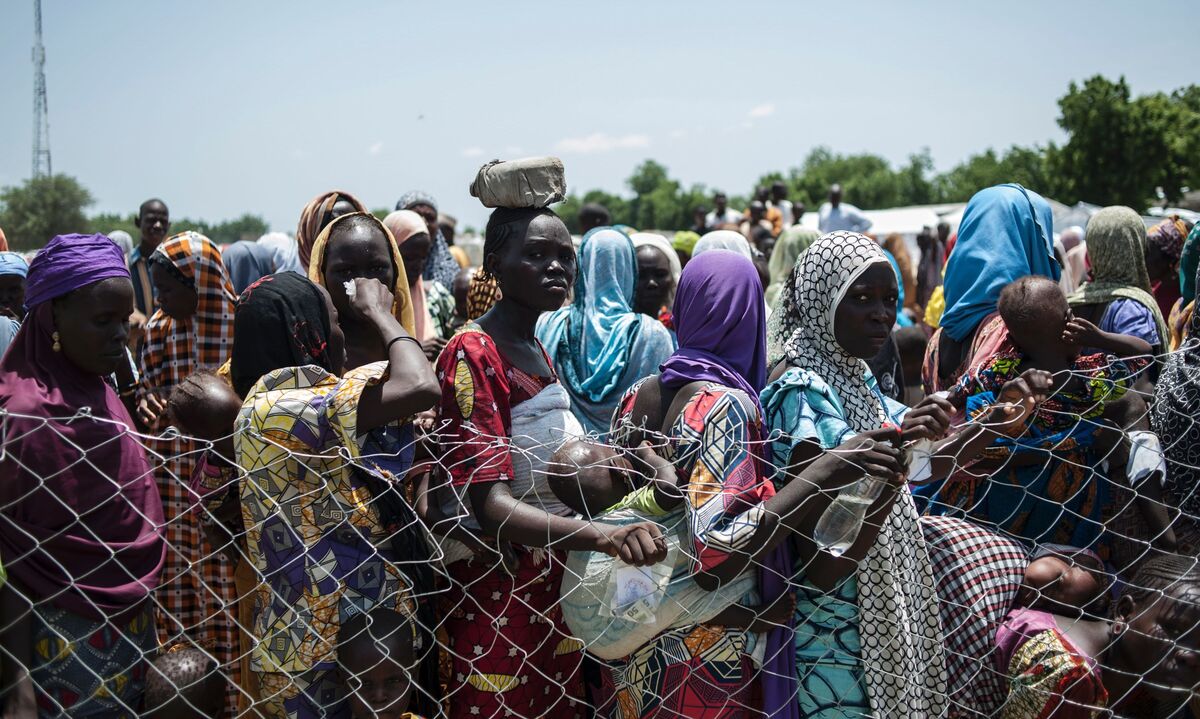 Women and children line up for food in one of the camps for displaced persons in Nigeria. The photo was taken on September 15, 2016.

In 2015, Mausi Segun was conducting research for a report on attacks on teachers and students in camps for internally displaced people in northeast Nigeria. She's the senior researcher for Nigeria for Human Rights Watch, an international nongovernmental group that publishes about 100 reports a year on human rights issues.

The people she met wanted her to look into a different topic.

"People walked up to us and asked why we were not researching the violence against women in the camps," she told Goats and Soda.

Segun and her team heard so many stories that they decided to investigate further, spending two weeks in late July interviewing women and girls from seven of the 13 government-run Internal Displacement Persons camps in Maiduguri, capital of Borno State, where the Boko Haram insurgency has led to massive population displacements.

"In each of the seven camps we visited, we heard reports of these abuses, Segun said.

Human Rights Watch released its findings this week. They had gathered accounts from 43 women about sexual abuse, rape and exploitation by individuals holding positions of authority in the camps, such as guards, soldiers, civilian vigilante groups, policemen and camp leaders and elders.

"We have no doubt that the actual numbers might be a lot higher because not everyone was willing to speak to us" and the researchers' time at the camps was limited, said Segun.]

The problem of sexual exploitation had previously been reported in a survey of camp conditions by the Nigerian polling and information company NOI Polls and in an assessment paper by the Borno State Protection Sector Working Group, and they are referred to in HRW's report. HRW decided to pursue the issue, Segun said, based on the information they were receiving and on their assessment of the value their work could have in ending the abuses.

The HRW research contains detailed accounts from several of the women.

All the victims were girls or women living on the camp's meager and sometimes nearly nonexistent rations of food, water and clothing. Eight of them had escaped from Boko Haram fighters who had abducted them and forced them to marry and have sex.

Often the girls and women were given precious extra food and goods by camp officials who expected sex in return. In many cases, the men held out the promise of marriage to persuade the women of their sincerity. Then, when the women became pregnant, the men abandoned them. In one account, a 16-year-old Nigerian girl told how she fled a Boko Haram attack, found refuge at an official Internal Displacement Center — and was drugged and raped by an official in charge of distributing aid. After she bore his baby, she heard that he left the camp.

A 30-year-old widow told how her husband was killed and two of her daughters abducted by Boko Haram. She said that she and her four other children were able to escape, fleeing into the nearby woods, where they survived for three months until they were discovered by government soldiers, who transported them to an IDP camp. She reported that a guard agreed to provide food for them — as long as the widow would have sex with him. Within two months, she had become pregnant, and he no longer had any contact with her.

A 25-year-old woman said she was forced to leave her brother's home for a camp because he had no money to feed her and her three children. One of the camp elders provided food and money and promised to marry her, she said — until she became pregnant with his child. He abruptly shunned her — as did others in the camp, who called her and children names. "I cannot participate in camp activities and keep to myself because of the jeers," she told the researchers.

One woman, who said she was shunned by others, asked what she'd done to deserve this treatment. "A man had forced himself on me," she said.

The poor conditions in the camps contribute to creating an environment where such exploitation could take place, said Segun. Basic resources such as food and water are inadequate, and those in power have the ability to determine who receives how much how often, she learned from the interviews. Authority figures could also agree to issue passes to allow movement in and out of the camp, which was for the most part severely restricted, contrary to United Nations guidelines.

Camp conditions were spelled out in a July survey by the Nigerian polling and information company NOI Polls, which described a "serious inadequacy of food and dietary needs" as well as potable water, leading to a deficiency in nutrition "especially for babies, children, lactating mothers and the elderly."

The survey, which collected data from official and unofficial camps in the Nigerian states of Borno, Yobe and Adamawa, also reported sexual exploitation and abuses by those in authority. "There was evidence to suggest the existence of the practice of 'Sex for food' or even 'Sex for freedom of movement' in and out of the camps," the report stated.

Similar "trades" of sex for survival necessities in government-run IDP camps are described in a report published in May 2016 by the Borno State Protection Sector Working Group, which is made up of national and international aid providers: "Survival sex has been reported by women/girls in nearly all camps, including in exchange for food assistance and to gain freedom of movement in/out of camps."

Although Human Rights Watch wrote to Nigerian authorities about their findings in August, they received no response until after the report itself was released on Monday. Nigerian president Muhammadu Buhari responded right away, stating on Twitter that the report was "deeply worrying" and that he has "asked the Inspector-General of Police and concerned State Governors to investigate immediately."

I have seen the new @hrw report, and asked the Inspector-General of Police and concerned State Governors to investigate immediately

He added, "Let me assure that these very distressing reports will not be taken lightly. We will act decisively on the findings of the investigations."

A previous version of this post misspelled the name of Human Rights Watch researcher Mausi Segun as Masui.