Accessibility links
Cholera 101: Why An Ancient Disease Keeps On Haunting Us : Goats and Soda What, exactly, is cholera? And why can't we stop it? 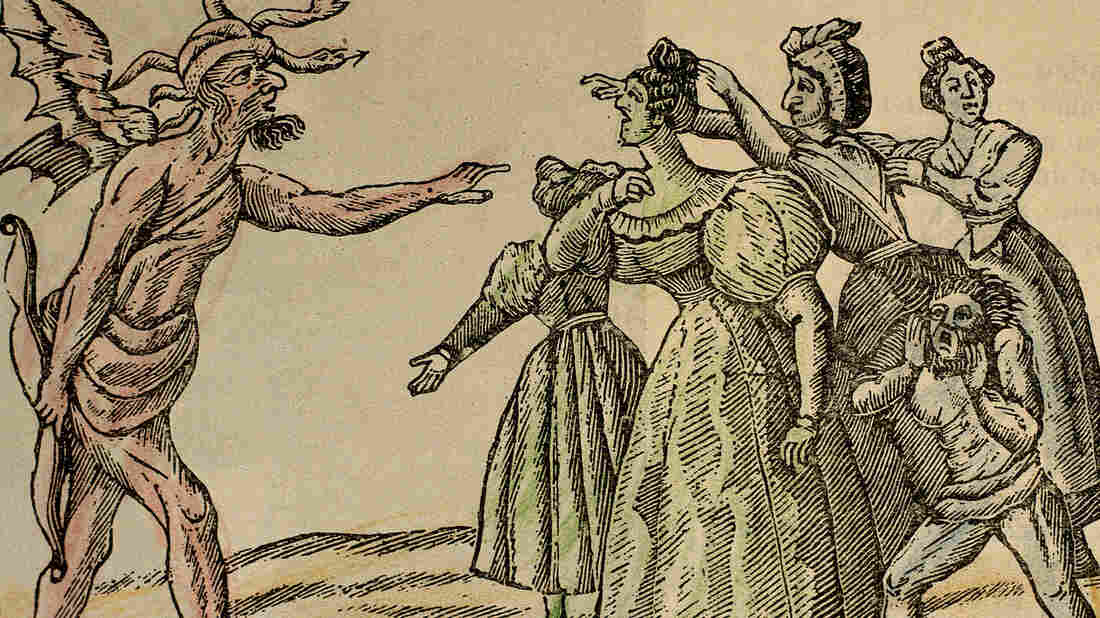 The figure at left is the personification of cholera, facing resistance from a group of women. This 19th century engraving is from Barcelona. PHAS/UIG via Getty Images hide caption

Cholera can kill a person in a matter of hours.

It's a severe gastro-intestinal disease, and it can trigger so much diarrhea and vomiting that patients can rapidly become dehydrated. They lose so much fluid that their internal organs shut down.

The water-borne disease has been around for centuries, and it remains a global health risk. According to the World Health Organization there are roughly 3 million cases a year and 90,000 deaths. The worst epidemic is now in Haiti, linked to cholera brought by U.N. peacekeepers and surging anew in parts of the country hard hit last month by Hurricane Matthew. There's another outbreak flaring in South Sudan. In countries that have long been grappling with cholera, such as Bangladesh, India and the Democratic Republic of Congo, tens of thousands of people are sickened every year.

"It's been in the Ganges delta from time immemorial," says Dr. David Sack, a professor at the Bloomberg School of Public Health at Johns Hopkins in Baltimore.

"It began spreading to the Western world in the early 1800s. With travel and transport ships going back and forth to India, it spread through Russia, through Western Europe. It came to Baltimore. It came to New York, Philadelphia in the mid-1800s. It was a disease that affected large parts of the world."

In the 1800s cholera killed millions of people as it spread around the globe.

"At that time we didn't know what caused it," says Sack, who's spent much of his career studying the disease. "We didn't know how to treat it. A case of cholera that is untreated has a fatality rate of about 50 percent and that's what was happening in Philadelphia, New York, Baltimore."

Theories about what the cause of this horrendous illness were plentiful. Foul air rising from sewers and piles of rotting trash was a leading suspect. Some church leaders said it was retribution by God for sinful behavior. Poison in the soil was suggested as a possible culprit. There appeared to be a link between cholera and filthy, overcrowded urban slums.

In the 1850s an English doctor named John Snow became a legend of public health for figuring out that an outbreak in the Soho neighborhood of London was linked to a single drinking water source. Dr. Snow is credited with stopping the raging outbreak, which claimed 10,000 lives across London, by taking the handle off of the Broad Street pump.

Snow argued correctly that water contaminated with sewage was spreading the illness from one resident to another. But he still didn't know exactly what the water was contaminated with. He theorized that it might be tiny parasites or germs or some "poison" that was able to reproduce in the environment.

Around the same time an Italian scientist, Filippo Pacini, identified the bacteria that causes cholera. But his discovery wouldn't be widely accepted until decades and millions of deaths later.

Sack at Johns Hopkins says cholera now is a treatable disease so long as the patient gets medical attention quickly.

"A patient with cholera should never die," Sack says. "If they get to a treatment center in time, if they still have a breath, we can save their life."

There is no cure or antidote or magic pill. Treatment consists of simply keeping the person hydrated. In severe cases the patient may need to be given fluids intravenously. If they are capable of drinking, they can also be treated with oral rehydration fluids, basically souped-up sugar water.

The current outbreak on the island of Hispaniola, which Haiti shares with the Dominican Republic, began in 2010. Sack says that it is of historic proportions.

"It's huge," he says. "We haven't ever seen something quite like this [in modern times]."

To put this outbreak in perspective: In 2016 in all of the Americas, roughly 30,000 cholera cases have been reported to the Pan American Health Organization, the regional office of WHO, from four countries. 1 case was in Mexico, 1 case was in Ecuador and all the rest were in Haiti or the neighboring Dominican Republic.

Now in the wake of Hurricane Matthew the Haitian Ministry of Health says the daily number of new cholera cases nationwide has doubled and in areas hard hit by the storm risen even more dramatically.

Jean Luc Poncelet, the country representative for PAHO, says some of the increase in cholera cases could be due to better reporting as more international aid workers stream in to the region. But he also says there's definitely been an increase in cases in the Grande Anse and Sud departments where Matthew by some estimates damaged or destroyed 90 percent of the buildings.

"The hurricane has increased the risk (of cholera) for that part of the population," Poncelet says. To try to combat this PAHO along with the Haitian health ministry and an army of aid groups are about to launch a massive cholera vaccination campaign in the area. The goal of the immunization drive is to vaccinate 800,000 Haitians against the water-borne bacteria. Oral cholera vaccines are relatively new. If successful this would be the largest emergency cholera vaccination campaign in history.

Is An End Even In Sight?

But Poncelet cautions that the vaccine is not going to stop the outbreak.

"Vaccine is not the solution. It is one tool that we have to add to the ones we already have," he says. The vaccine is supposed to provide 65 percent efficacy if given in two doses spaced at least a week apart. But due to a global lack of cholera vaccine and the chaotic situation in parts of Haiti torn apart by the hurricane, health officials are only planning to give a single dose, which means the effectiveness is at about 50 percent. In relation to other vaccines a 50 or 65 percent efficacy is quite low, but Poncelet says the exact efficacy rate isn't what's important. He says what's important is that the vaccine would contribute to the overall fight against the disease. "People die in Haiti (from cholera) not because they've not been vaccinated. They die because they don't know about rehydration and how to do it quick enough."
He says long-term solution to the Haiti cholera outbreak is to improve access to clean water for Haitians.

In the short term, PAHO and other agencies are urging Haitians to chlorinate their drinking water at home.

Researchers stress that once cholera bacteria has been introduced in to a country, it can survive for years in the environment.

Poncelet says Haiti unfortunately is a long way off from eliminating cholera.

"Until Haiti does have access to clean water and sanitation," Poncelet says. "Eradication will be extremely difficult if not impossible."

Globally the idea of eradicating cholera is so far off that it isn't even on the agenda of global health officials. The final chapter on cholera's long history will only come about when living conditions improve to the point where almost everyone has reliable access to clean water.

Watch Jason Beaubien talk about cholera in a Facebook q&a he did on Thursday.