Accessibility links
Does Bono Deserve The 'Glamour' Award For Global Activism? : Goats and Soda We spoke with some global development thinkers to see what they think about the impact of Bono and the One group he co-founded.

Does Bono Deserve The 'Glamour' Award For Global Activism?

Does Bono Deserve The 'Glamour' Award For Global Activism? 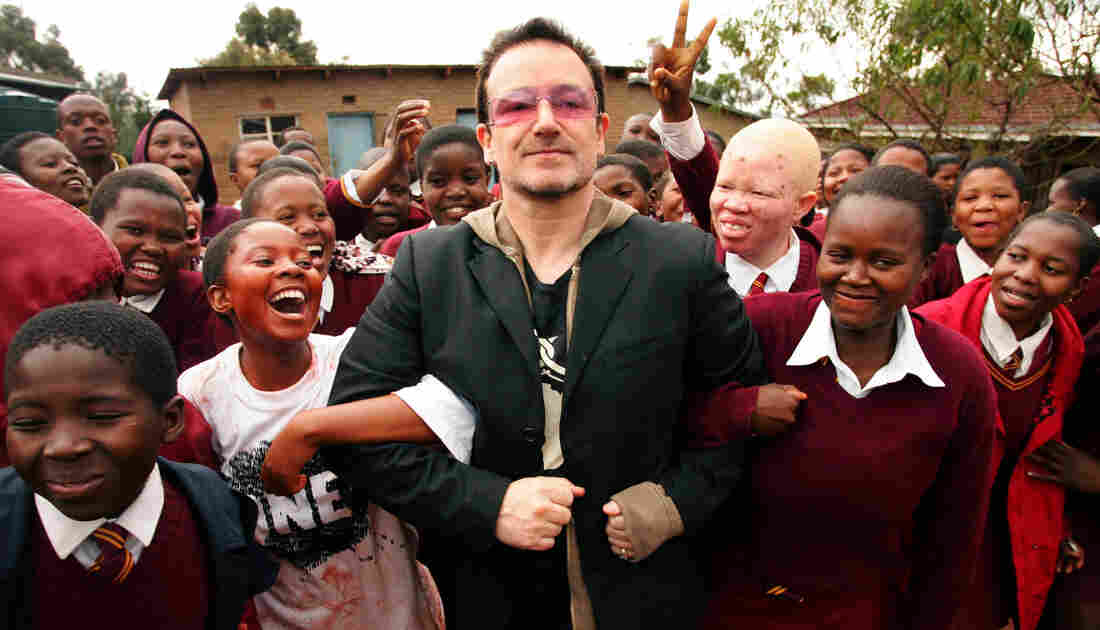 Bono is greeted at a school near Maseru, the capital of Lesotho — part of a 2006 tour to highlight progress in providing treatment to people living with HIV and AIDS. Mike Hutchings /REUTERS hide caption 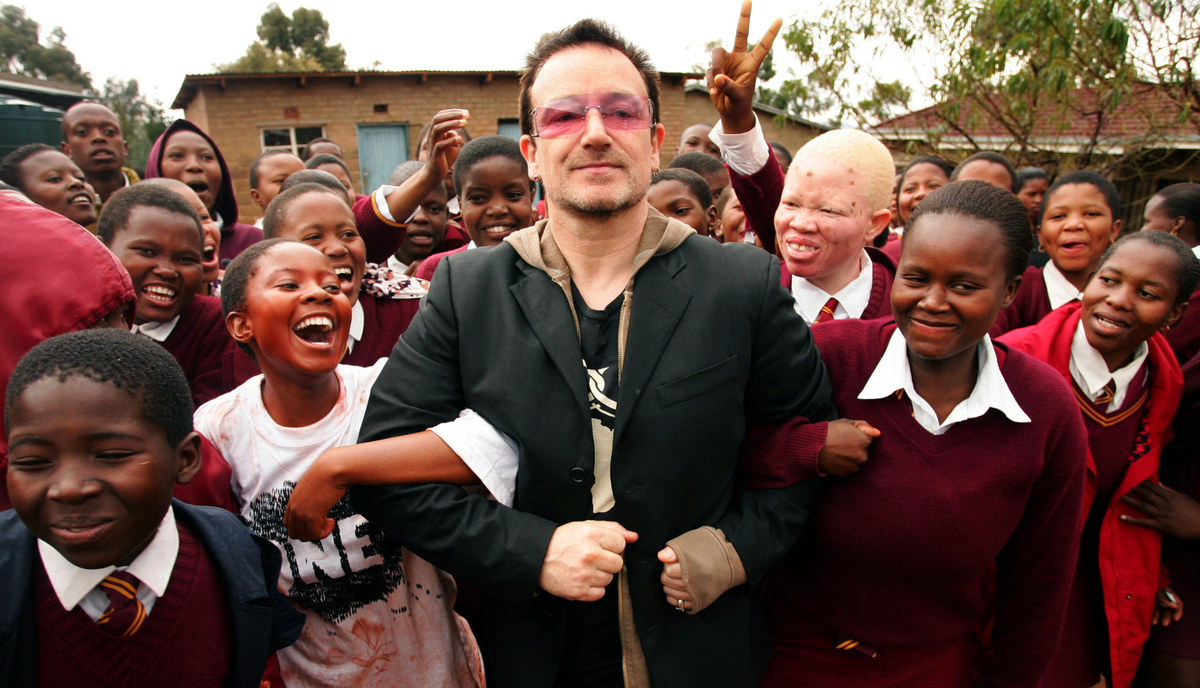 Bono is greeted at a school near Maseru, the capital of Lesotho — part of a 2006 tour to highlight progress in providing treatment to people living with HIV and AIDS.

On November 14 at a ceremony in Los Angeles, Bono will be honored as one of Glamour's Women of the Year. He's the first man to make the list.

For First Time, Glamour's Women Of The Year Include A Man: Bono

The internet has spent plenty of time tweeting and arguing about whether it's appropriate to give an award created for women to a man. We'll respectfully bow out of that debate. But we were interested in looking at the reasons for Bono's inclusion: His activism on global issues that often focus on women.

The 57-year-old Irish rock star is cofounder of One, a nonprofit that aims to reduce global poverty, with emphasis on women in poverty. The frontman for U2 co-founded the nonprofit advocacy group in 2004, with the slogan "Make Poverty History." Instead of soliciting donations, One works as a lobbying organization. They gather signatures for petitions that press governments to spend more to help the poor. One campaigns have focused on providing more vaccine coverage, anti-HIV meds and access to electricity.

The white wristbands that members once wore to show support for One are no longer around. But One remains active, with more than 7.5 million members and offices in Berlin, Johannesburg and Paris. Its latest campaign, which advocates for policies that give women an economic leg up, uses the slogan "Poverty Is Sexist."

After the Glamour award was anounced, Bono said: "I'm sure I don't deserve it."

So does he, in fact, deserve it? We spoke with people involved with global development and women's issues to see what they think about the impact of One — and Bono's brand of celebrity activism.

Their answers were edited for length and clarity.

Elizabeth Ngonzi, adjunct faculty at the Heyman Center for Philanthropy and Fundraising at New York University and CEO of Afrika Tikkun, a nonprofit organization that works with rural communities in South Africa.

One's new campaign is called "Poverty is Sexist." What's your reaction to that campaign?

What's really important here is that they're taking action to address some of the biggest challenges facing women and girls in extreme poverty.

Explain how poverty is sexist.

We know that women are less likely to have access to education and business opportunities or even land than men are. We know that many women in poverty rely on spouses for support, which means that if they're in an unsafe situation, it can be difficult for them to get out.

Globally, most people in poverty are in women-led households. In many places, there are laws that prohibit women from having access to business opportunities or even land. If she can't access the economy and has children, it puts the burden on society to take care of the kids. But if you enable her to support her family, the ripple effect is enormous. There's research that shows that when you provide women with access to the economy, they invest [the money] back in their family and community, spending it on things like school fees. That gives their children a chance to access the economy.

What kind of reputation does One have?

One has been in this game for a long time. They're not an organization that just started up, had a campaign and left. They've evolved over time and they've been consistent.

As far as Bono being named, I've always found it problematic that conversations about gender issues are just among women, but the people who are in power and who we need to work with are men. I think it's strategic to name him: It indicates this isn't just about women, it's about men and women working together.

Charles Kenny, senior fellow at the Center for Global Development in Washington DC.

Is One an effective group? What have they accomplished?

One produces advocacy campaigns built around a pretty good understanding of development issues. Do they simplify? Yes, they do. But I have a Twitter account. I also take complicated subjects and say something about them in 140 characters.

I think it's worth looking at what legislation has been passed in Congress related to development recently. There's the Power Africa Initiative, which the administration came up with and was passed by both the House and Senate. It tries to extend electrification in Africa via existing channels.

[This] bill was pushed quite heavily by the One campaign. I'm not sure if it would have passed without a lot of behind the scenes and in front of the scenes activism.

Are there other issues you'd like to see One address?

They have to maintain a certain image, one that isn't too controversial. They might shy away from some issues that I think are important to global development, because they might not get bipartisan support [in the United States] behind them. For example, I'd love to see them do work on migration, but that's a more controversial issue. But for an organization that is based on being bipartisan, I think they do a pretty good job.

I don't think there's any reason one ought to listen to someone about global poverty just because they write pretty good songs. In that sense, I think the skepticism is justified. But with this particular person, he's spent a lot of time learning about the issues. I think, in general, [Bono] is an example of someone who uses his platform in a very responsible way, and I'm glad he does it.

'Poverty is Sexist' just launched last year. Is it premature to give an award for something that might not have accomplished a lot yet?

Are you asking if this is like giving Obama the peace prize right after he takes office? I guess there's a bit of a risk. We haven't suddenly seen a massive improvement in the quality of life of poor women worldwide since the campaign started. But I think it would be fair to recognize all the time and personal capital Bono has spent on the issue of poverty and social development.

How are celebrity activists viewed in the global development sector?

Celebrities can be a thorny issue in the nonprofit campaigning world. There are [activists] who have worked very hard and have been imprisoned and faced real difficulties, and there can be a sense that a celebrity comes along and gets all the credit.

On the other hand, celebrities can open doors for a campaign. There's so much competing for your attention and your time, and celebrities break through. A friend said that even senators and members of Congress want pictures with Bono.

Is Bono a good celebrity activist?

Like all these things, that depends on who you ask at the moment. I think there's a general sense that he does his best to be respectful, and he's really well-informed and understands the issues. In that sense, he's a model for the A-list celebrity who can bring attention to an issue. I've been in rooms and meetings where he holds court with policy experts and movement leaders around the world. Bono is one of the only celebrity activists who has founded and led an organization to the level of being in board meetings and things.

While people might not always agree with him, I don't think anyone would accuse him of doing this for his ego. He's already a rock star — it's not like he needs more attention.