Accessibility links
Tests Of Vaginal Ring Show It's Good At Fighting HIV. But How Will It Impact Sex Lives? : Goats and Soda It's a problem with many of the anti-HIV options. Even if they're proven to be effective, people don't always want to use them.

Experimental Vaginal Ring Fights HIV, But Will Women Wear It?

Experimental Vaginal Ring Fights HIV, But Will Women Wear It? 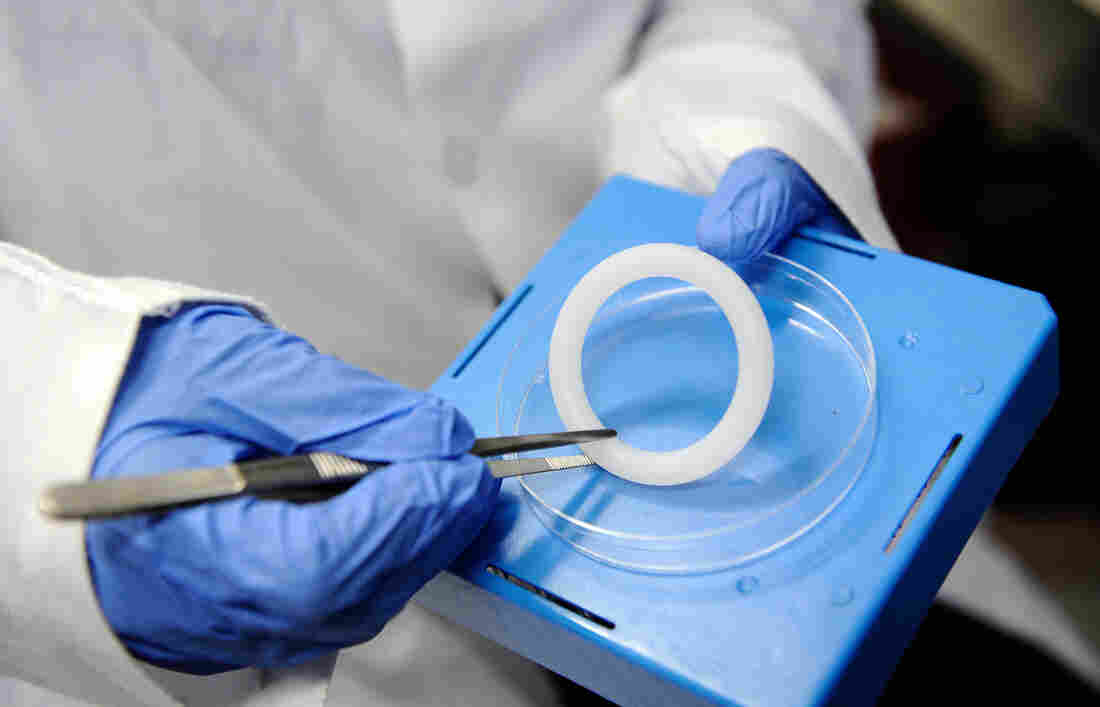 The vaginal ring is made of silicone, it's flexible and it continuously releases the anti-HIV drug dapivirine. Stephane De Sakutin/AFP/Getty Images hide caption 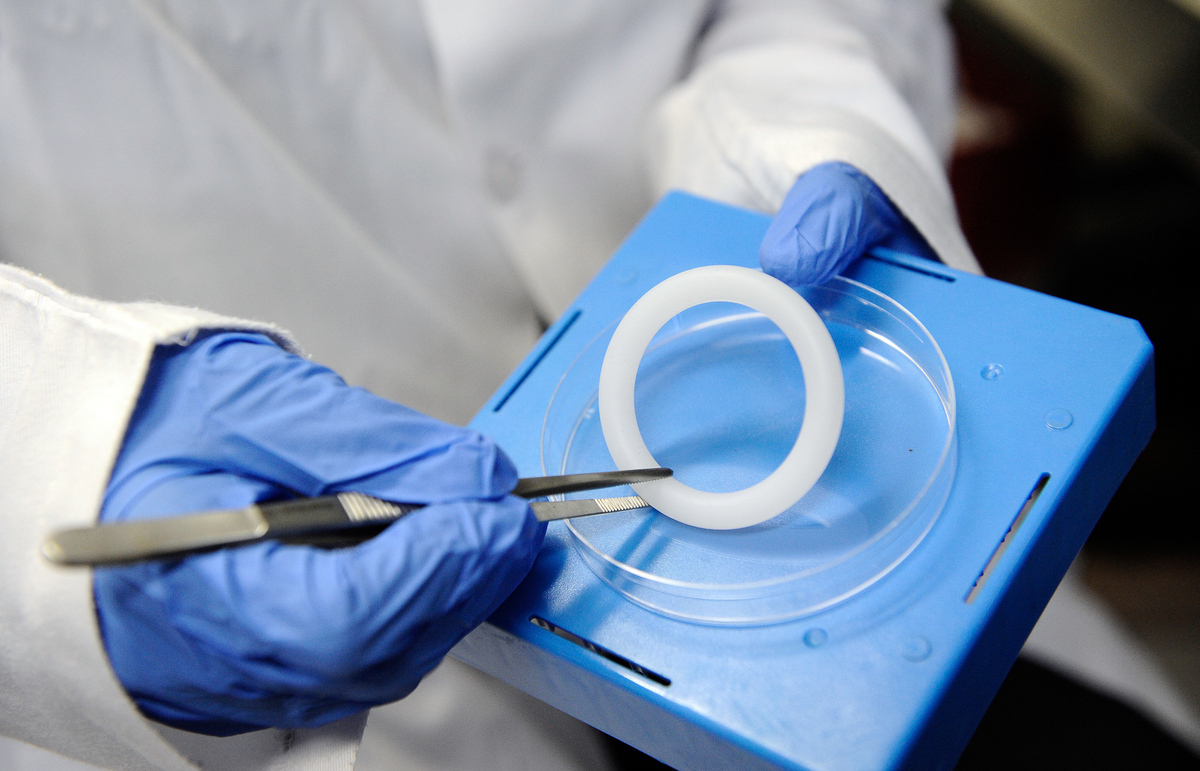 The vaginal ring is made of silicone, it's flexible and it continuously releases the anti-HIV drug dapivirine.

An experimental vaginal ring that continuously releases the anti-HIV drug dapivirine has the potential to save lives.

But what's it going to do to sex lives?

That's a question researchers posed as part of the ASPIRE study, which tested the flexible silicone rings with women ages 18 to 45 living in Malawi, South Africa, Uganda and Zimbabwe. And it's a practical one, explains Dr. Anthony Fauci, director of the National Institute of Allergy and Infectious Diseases, which funded ASPIRE. The less obtrusive a form of prevention is, the easier it is to convince people to use it.

"Something not noticeable is great," Fauci says.

The encouraging news, gleaned from ASPIRE staff interviews with 214 of the 2,629 participants, is that sex with the ring wasn't much different — at least physically.

What happens in people's bedrooms, however, is also psychological. Some women reported worrying about what would happen if their partners felt or discovered the ring, which is 2.2 inches in diameter and a third of an inch thick. They feared being interrogated in the middle of sex, despite the fact that Fauci notes, "That's not what happens. It's less obvious than a diaphragm." But because of this anxiety, several women slipped out the ring prior to intimate contact, while others avoided certain positions.

Understanding these real world concerns is critical, says Zeda Rosenberg, CEO of the nonprofit International Partnership for Microbicides (IPM), which developed the ring. From earlier studies, IPM learned that women could use the rings without a problem, and that they don't cause irritation or make the user more susceptible to yeast infections.

While the point of the ring is to help women gain control over their sexual health, what their partners think — or could think — also matters.

Indeed, virtually every option for HIV prevention comes with some partner baggage.

"Condoms are problematic for women," Fauci explains. "When women demand use of a condom, they can be subject to partner violence or rejection or stigma." Or their partners might flat out refuse to wear one. "The man gets insulted and says he doesn't have HIV. That's baloney because sometimes men are infected," Fauci adds.

Different challenges have emerged with the rollout of oral pre-exposure prophylaxis (or PrEP). "It's so easy to take a single pill every day," Fauci says. "But some people don't want to do it, even though it's 98, maybe 100 percent effective." One reason? "Maybe the partner finds the pills," he says. That can lead to questions about what the meds are for, and whether the women on them might already be HIV positive.

The ring, when used as directed, is inserted just once a month and left in place, then taken out and replaced with a new ring for the next month. So that will hopefully make it an appealing option for women, Rosenberg says, adding that her group is already working on the next generation of ring. It will also provide contraception, which may help women make a stronger case for using it. "Partners might be more forgiving because it's not necessarily passing judgment on the man," she explains. Women can claim they're trying to avoid pregnancy rather than infection.

Because, as Rosenberg says, "there are going to be as many scenarios as there are people," the most important thing is to offer choices — and as much information as possible.

That will require more research. Overall results from ASPIRE showed that among the entire group of participants using a dapivirine ring, the risk of HIV infection dropped 27 percent. But when researchers separated out the participants who had used the ring consistently, they got much more impressive numbers: Risk of HIV infection fell by around 75 percent.

It was not hard to tell who kept the ring in and who didn't. When participants came in for their monthly visit, researchers could see how much of the drug was left in the ring, Rosenberg explains. The more dapivirine, the less time it was inside a woman's vagina.

"We think it works much better if you use it all of the time," Rosenberg says.

But she understands why only about 25 percent of ASPIRE participants did that. "In trials and real life, people are not perfectly adherent," she says, noting that's particularly true of healthy populations, who don't have the same incentives for following doctor's orders. And women in ASPIRE didn't know whether they had an active ring or a placebo.

As for the 25 percent who barely used it at all? Rosenberg suspects that they may have signed up for ASPIRE to receive the other benefits, which included high quality health care without long waits.

Other HIV researchers find these results promising, says Dr. Jessica Justman, an associate professor of epidemiology at Columbia University's Mailman School of Public Health. "If you don't use something, it doesn't work. That's not a surprise," says Justman, who has learned through her clinical research studies that it takes time for people to accept something that's different.

Ideally, the ring would have offered full protection even in the cases where women just removed it occasionally, but that doesn't seem to be the case. "The ring isn't designed to be taken in and out. That needs to be part of the messaging," Justman says.

And it will be, Rosenberg notes. Research on the ring continues in Africa with the HOPE study, which began this summer and is also funded by NIAID. The difference, Rosenberg explains, is that this is an "open-label" study, which means women will be told there are no placebos in the mix.

Under these conditions, Rosenberg expects more participants will use the ring consistently. There will still be some who don't, she adds. "If I were a woman in the study and my partner went away for a month, I might take it out," she says.

There will likely be other women who continue to remove it during sex. Researchers don't yet know exactly how long the drugs will stay in the vaginal tissue, and it's virtually impossible to pinpoint the moment of infection.

It's also tough to say when the ring will be available to the general public, but Rosenberg is hopeful for a 2019 rollout.

Expect to see a host of HIV prevention options on the market within the next five years, says Justman, who has been working on studies to see if anti-HIV injections are safe. A long-acting shot would have some of the same benefits as the ring — namely, that a user doesn't need to remember to do something every day or right before sexual contact. For women anxious about their partner's response, the fact that it's virtually undetectable might be appealing.

"But some people don't like needles," Justman says. Plus, a shot will require a clinic visit, while women can insert a ring by themselves.

So Justman sees a place for both choices, as well as a continued need to study sexual behavior. That means researchers will need to talk to a lot more women — and men — about their most intimate interactions.