Accessibility links
Will Trump Administration Commit To The Global Fight To End Poverty And Roll Back Disease? : Goats and Soda The U.S. has helped mount a historic effort to eliminate poverty and roll back diseases. Will Trump keep it going? 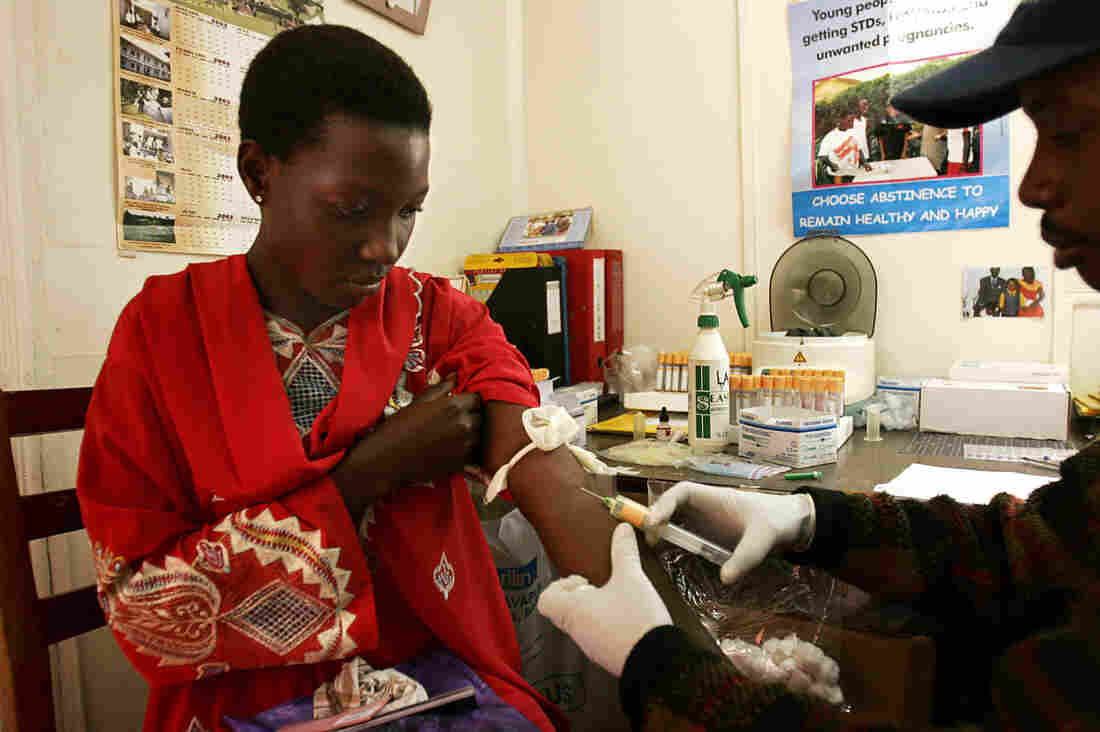 A young woman is tested for HIV at a health clinic in Uganda. During the presidency of George W. Bush, the U.S. substantially ramped up spending on HIV/AIDS programs abroad — a commitment that retains strong bipartisan support to this day. Per-Anders Pettersson/Getty Images hide caption 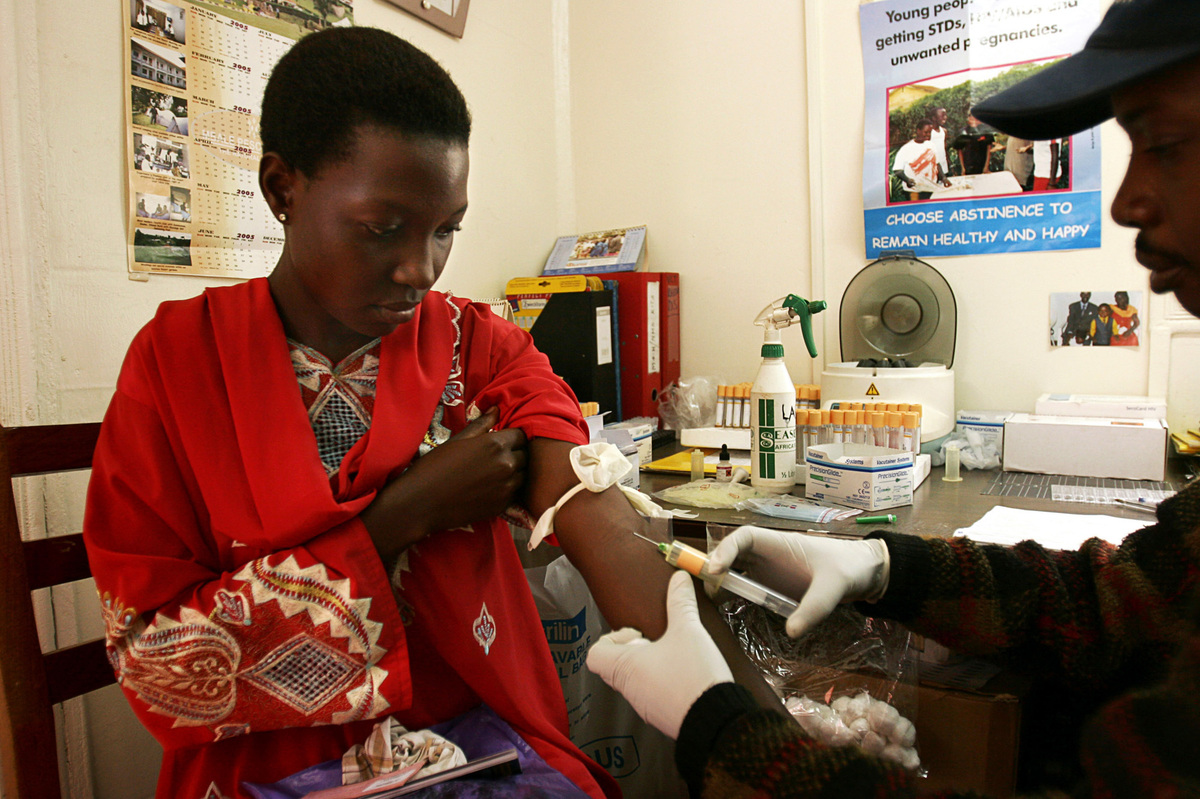 A young woman is tested for HIV at a health clinic in Uganda. During the presidency of George W. Bush, the U.S. substantially ramped up spending on HIV/AIDS programs abroad — a commitment that retains strong bipartisan support to this day.

Donald Trump will take office at a pivotal time for the world's neediest.

The world's wealthy countries have, since 2000, been part of a historic partnership with poor countries to eliminate poverty and roll back diseases.

Over the past 16 years millions were given access to lifesaving HIV/AIDS and malaria treatments. From 1990 to 2015 the number of people living in extreme poverty dropped by more than half from 1.9 billion — or 47 percent of people in developing countries — to 836 million, or 14 percent. And last year, world leaders meeting at the United Nations committed to eliminating extreme poverty altogether by 2030.

Plenty of obstacles remain: the unprecedented migration crisis, the threat of global disease pandemics, and the long-term consequences of climate change, to name a few. Still, "the last decade has probably been the best in the history of mankind in terms of welfare benefits and reductions of poverty," says Todd Moss, chief operating officer at the Center for Global Development, a Washington think tank.

Will Donald Trump commit his administration to being part of this global effort?

From AIDS To Zika: Trump On Global Health And Humanitarian Aid

Right now, "we know very little," says Moss. Trump barely mentioned the issue during the campaign. And until he fills key foreign policy jobs in his administration, "it's not clear who will be the people in positions of influence on this."

The stakes are high because the U.S. role in dealing with these health and development issues has been "outsized," says Raj Kumar, president and editor-in-chief of Devex, a news and jobs-listing website for international development professionals. No country donates more aid dollars, notes Kumar — with about $10 billion per year spent on global health programs alone. But it's more than that. U.S officials are also vigorously involved in setting the agenda on global health and development.

And this is all the product of a rare consensus that has coalesced in Washington around the value of foreign assistance and its centrality as a tool of foreign policy. As recently as the early 1990s, then-Republican Sen. Jesse Helms was opposing foreign aid on the grounds that much of it amounted to pouring money down "rat holes." Yet today, says Kumar, the foreign aid budget has emerged as one of the few areas of bipartisanship agreement in Congress. "It's kind of an amazing thing at a time when we think of nothing but gridlock. But Republicans and Democrats on the Hill have come together in amazing ways around foreign assistance."

Much of this dates to the administration of President George W. Bush, says Kumar. "He really ramped up American capabilities through massive new funding for foreign assistance." This included the President's Emergency Plan for AIDS Relief, or PEPFAR — which has provided HIV-AIDS drugs to millions of people in poor countries — and the Global Fund to Fight AIDS, Tuberculosis and Malaria.

Bush's push for sweeping efforts in this arena had the vigorous backing of religious conservative lawmakers such as Vice President-elect Mike Pence, who said in a 2008 speech that the United States had both a "moral obligation to lead the world in confronting the pandemic of HIV-AIDS" as well as a genuine security interest in doing so. "If not addressed," said Pence, "this plague will continue to undermine the stability of nations throughout the Third World, leaving behind collapsing economies and tragedy and desperation, a breeding ground for extremist violence."

Obama has built on those efforts still further, putting particular emphasis on preventing global disease pandemics in the aftermath of the 2014-2015 Ebola outbreak by, among other measures, working to strengthen health systems in poor countries. "Global health really became part of what the U.S. government did in development," says Jennifer Kates, vice president and director of Global Health & HIV Policy at the Kaiser Family Foundation.

And while spending on global health has not gone up considerably under Obama, says Kates, the fact that "it's been protected at a pretty constant level" in the midst of all the budget battles between Obama and Republican leaders of Congress speaks volumes. In the current environment, "if you can have flat funding for your program, that's often seen as a success," she says.

The overall foreign assistance budget — including programs to spur the economies of poor countries — has also generally fared well. And Obama's administrators of USAID, the agency housed within the State Department that's most prominently in charge of U.S. foreign aid programs, have enjoyed fairly smooth relations with congressional Republicans.

In short, concludes Moss, "I think there's pretty broad agreement that we cannot turn our backs on the world's most needy and desperate people — that that will only come back to bite us."

Of course it doesn't hurt that the amount of money involved is relatively small, accounting for roughly 1 percent of the total U.S. budget and thus reducing foreign aid's appeal as a target for budget-cutting.

Still, Kumar says, don't assume that the bipartisan consensus could never break down — or at least wobble — in the coming Trump era.

"Since [global health and development] has not been a priority for [Trump's] campaign and there are other priorities which are going to cost money like a tax cut, it's entirely possible that some foreign assistance programs will be on the chopping block," he says.

And at that point, he says, "these kinds of programs that have been bipartisan might no longer be."

A previous version of this story incorrectly stated the name of the Global Fund for Malaria. The organization is called the Global Fund to Fight AIDS, Tuberculosis and Malaria.