Accessibility links
Young Widow With 5 Kids Turns To Activism To Oust The President Of Zimbabwe : Goats and Soda She's a former train driver and labor leader — and now an activist in the campaign to drive Zimbabwe's president, Robert Mugabe, from office. 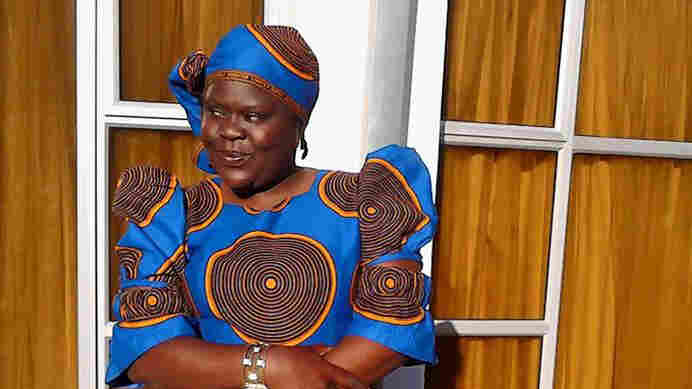 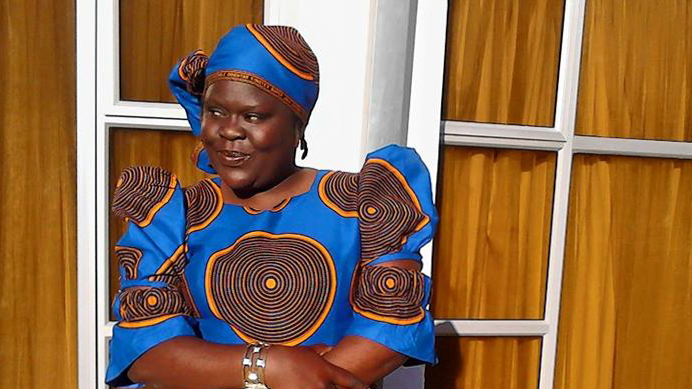 Linda Tsungirirai Masarira was sent to prison for 84 days for her public protests against the leader of Zimbabwe.

She was the only woman in a prison for men. She was locked up in solitary confinement.

And she began to sing. Comforting songs in the morning, revolutionary and motivational songs in the afternoon.

That's how democracy activist Linda Tsungirirai Masarira kept her spirits up during her 18 days in solitary at Chikurubi Maximum Prison in Zimbabwe's capital, Harare.

She had been hauled off to prison in July after participating in a nationwide strike and series of anti-Mugabe street protests.

Masarira is a 35-year-old widowed mother of five. She was a train driver and labor leader at National Railways of Zimbabwe, till she was fired last year for leading a campaign to demand the payment of back salaries.

Masarira took to activism because she wants change in Zimbabwe and the departure of 92-year-old President Robert Mugabe, who has been in power since independence from Britain in 1980. Masarira says autocratic leaders and a crippled economy are not what Zimbabwe needs, and she blames Mugabe.

"We cannot just sit back and watch our lives go down the drain at the expense of just a few elitists who think they're demigods," fumes Masarira. "Enough is enough. We want to reclaim Zimbabwe."

The protests that Masarira took part in were organized by Zimbabwean hashtag opposition movements like #ThisFlag and #Tajamuka, Masarira's own group. Tajamuka means outraged, angry and defiant in Zimbabwe's dominant Shona language.

She says she was assaulted and manhandled by the police when she was detained. "They denied me bail. I still remember the prosecutor saying, 'This woman is a state security threat. We cannot allow her to walk in the streets of Harare, because she is trying to cause despondency and take over power from Mugabe,' " says Masarira.

Masarira became a full-time activist "because there are gross violations of human rights in Zimbabwe and I kind of realized if I didn't speak, no one else was going to speak out. I don't even have any weapon, except my voice and my brains."

Not Masarira. She tells NPR she has been outspoken since her school days in Harare, where she was the self-appointed protector of the oppressed and the terror of bullies and would-be bullies.

"I used to stand up and fight. I was actually one of the most feared girls at our school. All the boys were scared of me, because I would beat them up when they tried to pour scorn on some girls," she remembers, adding, with a smile, "Maybe activism just comes naturally with me. I was born to fight for others."

While in prison from July to September, Masarira was transferred to Chikurubi Maximum Prison for men, after being accused of inciting female prisoners at the separate women's facility to protest against poor living conditions, food, health and sanitation.

"Those were the things that really pained me," she says. "This is supposed to be a correctional service, yes, but when you degrade a person to these levels, what are you trying to do?"

"Prisons in Zimbabwe are just like a death trap," she says, "where you just wait for your day to die."

Masarira says it's up to the youth to bring change. "We just try to seek out the opportunities to try to remove this evil regime from power, because it has made us suffer for the past 36 years. We've realized the political parties have failed. That's why we've decided on the citizens' movement."

A number of young people, including Masarira, have emerged as committed freedom campaigners in recent months in Zimbabwe. They've been out on the streets, organizing online and pop-up anti-government street protests and demanding Mugabe's departure. And a number have now spent time in prison.

While in solitary confinement, she read and wrote to fill the long hours. At Chikurubi, the men were downstairs and Masarira held upstairs, on her own, she says.

"It was very lonely the first and second day, but I had to stay positive," she says. "I expected this when I went into activism. I told myself what doesn't kill me makes me stronger, and I got stronger."

So she sang to keep herself company, while the authorities taunted her that she would be in prison for a long time.

And then she laughs out loud and sings "Sunungura Zimbabwe."

"Means like 'Free Zimbabwe.' I've got a passion to free Zimbabwe. And I used to sing that song a lot. All the male prisoners when they heard it, they'll say like "Ah, Sunungura Zimbabwe." It turned out that the male inmates could hear her voice reverberate around the prison.

Asked whether this revolutionary song dated to Zimbabwe's war of liberation from white minority rule or was from more recent opposition to the Mugabe government, Masarira replied: "Most of the songs I sang are actually more recent songs that we composed, considering the situation that we're in. We actually thought the liberation war was to bring in black leadership that would care for blacks."

But, she says, the new black leadership oppressed its fellow black citizens even more than during than white colonial and settler rule.

Then came freedom from prison, followed by a spell in the hospital to treat a chest infection. And then, one would expect, an emotional reunion with her family — her five children and her mother, who cared for some of them while she was in jail. Others were looked after by friends. But Masarira told NPR last month, "To tell you the truth, I've only seen one of my children. I can't go home, because there are always different cars parked outside my house, inquiring where I am, why I haven't been home."

She knows of four or five activists who were abducted and beaten after their release from prison and, as others have told NPR, injected with an unknown substance.

But Masarira says they won't give up.

"We will not be silenced. We will fight on. I am fighting for my children's lives, for my future, for my fellow Zimbabweans' future."