Accessibility links
New Study: Vast Majority Of People With Depression Do Not Seek Treatment : Goats and Soda In poor countries, only 1 in 27 people received minimally adequate care. In wealthy countries, it's 1 in 5.

Study: Vast Majority Of People Who Are Depressed Do Not Seek Help

Study: Vast Majority Of People Who Are Depressed Do Not Seek Help 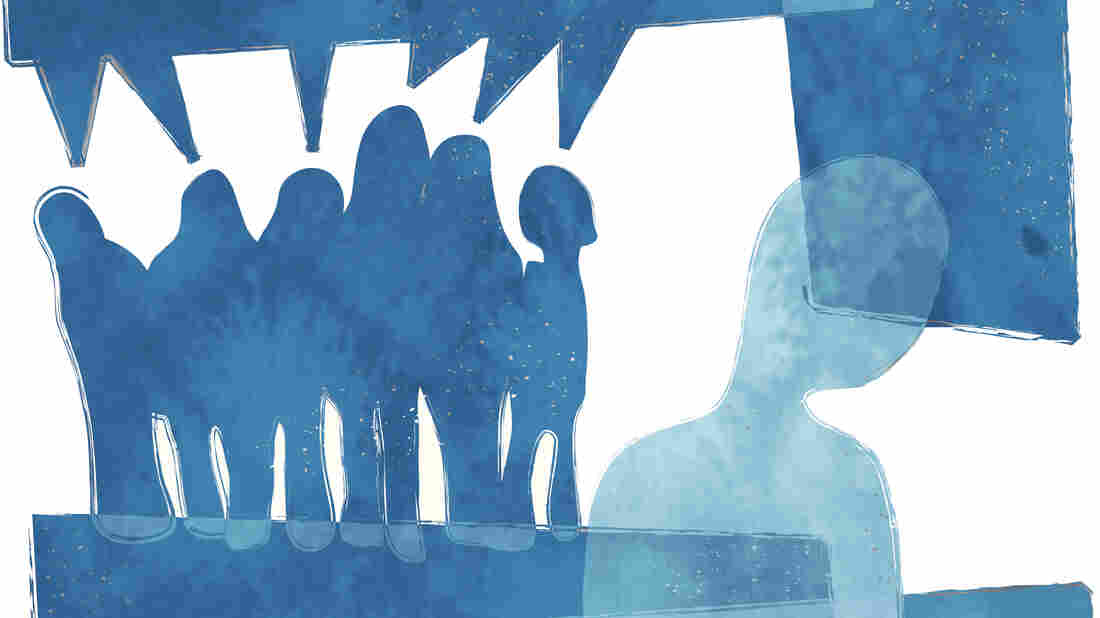 "I lost more than 80 percent of my university friends," recalls Jagannath Lamichhane.

After silently struggling with depression for two decades, Lamichhane published an essay in Nepal Times about his mental illness. "I could have hid my problem — like millions of people around the world," he says, but "if we hide our mental health, it may remain a problem forever."

Many of his friends and family didn't agree with that logic. In Nepal — as in most parts of the world — there's quite a lot of stigma around mental illness.

That was eight years ago. Now 35-year-old Lamichhane is a mental health advocate, working to challenge the stigma around depression.

Why Cambodians Never Get 'Depressed'

The problem isn't unique to Lamichhane's community. An estimated 350 million people are affected by depression, and the vast majority of them don't get treatment for their condition either due to stigma or a lack of knowledge, according to a study of more than 50,000 people in 21 countries. The study was led by Graham Thornicroft, a professor of psychiatry at King's College London.

He and his team of researchers from King's College London, Harvard Medical School and the World Health Organization found that in the poorest countries, one in 27 people with depression received minimally adequate care for their condition. Even in the richest countries, only one in five people with depression sought care. The data was published Thursday in The British Journal of Psychiatry.

The study also looks at how many people understand that they have a treatable condition — and how many are then actually able to get treatment. In Nigeria, for example, only a third of those with depression knew they had a problem and that something could be done done about it.

What's behind the stark numbers?

"There are really two key pieces of the puzzle," says Brandon Kohrt, an assistant professor of psychiatry at Duke University who wasn't involved in the recent study. The first issue, he says, is the lack of trained counselors, psychologists and psychiatrists all over the world. "But the second thing is there needs to be increased awareness that depression can be treated," he says.

To tackle both issues, WHO launched its Mental Health Gap Action Programme back in 2008. In 2010, the program developed a basic training guide to help primary care providers recognize and treat common mental ailments.

"Once you manage to change the life of one person in a community, he or she can become an advocate," Kohrt says — and can help educate family, friends and neighbors about depression.

That's basically how things played out in Nepal with Jagannath Lamichhane. "My suffering actually started when I was 10 years old," he says. But back then, "I wasn't aware what was happening."

He didn't want to go to school and had trouble sleeping at night.

His mental state started affecting his physical health; he had constant headaches and often felt weak. But doctors couldn't figure out what was wrong. His father then remembered an old friend who worked as a psychiatrist. "So with big hesitation and humiliation, we visited my father's friend for an informal consultation."

"I was lucky — my treatment was an exception," Lamichhane says. His father's friend provided talk therapy and medication. "For the majority of the public, it's a real battle to get any help."

That's why, he became a mental health advocate. "My message for young people is, if you feel something is wrong within you — seek help."