Accessibility links
Moroccan TV Segment About Using Makeup To Cover Signs Of Abuse Leads To Apology — And Debate : Goats and Soda The station has since apologized for the segment. But researchers say it reflects local attitudes toward domestic violence.

Moroccan TV Tutorial: How To Cover Up Bruises From Domestic Abuse

Moroccan TV Tutorial: How To Cover Up Bruises From Domestic Abuse 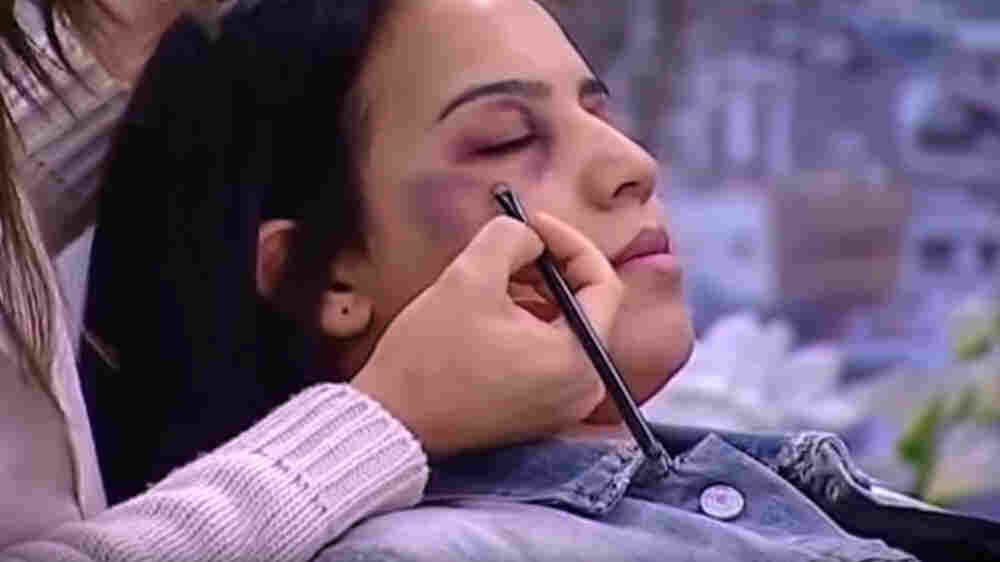 On a morning talk show on Moroccan TV, a makeup artist used a model to show how to conceal bruises caused by domestic violence. 2M/Screenshot by NPR hide caption 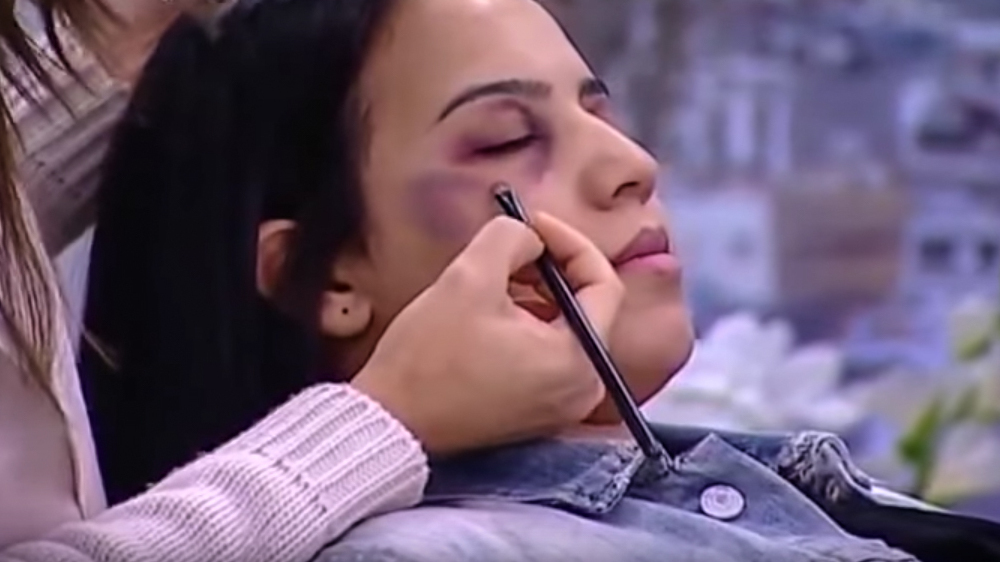 On a morning talk show on Moroccan TV, a makeup artist used a model to show how to conceal bruises caused by domestic violence.

On Nov. 23, a morning talk show on Morocco's state television aired a segment on using makeup to conceal bruises from domestic violence. It was part of a promotional effort for the International Day for the Elimination of Violence Against Women, coming up two days later.

The reaction was swift and negative. The TV station apologized.

But according to researchers and government surveys, the idea of covering up domestic violence reflects local attitudes. In Morocco, when a man beats, rapes, slashes or burns his wife, it's not uncommon for the woman's friends, families — even the police — to tell her to go back home and keep her mouth shut.

To learn more, we spoke with two specialists on this topic. Rothna Begum is the Middle East and North Africa women's rights researcher at Human Rights Watch. In September 2015 she interviewed 20 women who had experienced domestic violence in Morocco, and she has also interviewed dozens of women's rights activists, lawyers, social workers and people working with domestic violence survivors. Sarah Kambou is president of the International Center for Research on Women.

Why do you think the television show did this segment?

Begum: The makeup artist thought it would be helpful for women to cover up bruises so they could continue with their everyday lives. There was no negative intention around it, but it was misguided — that women should be concerned with covering up, rather than stopping, violence. The station has apologized for editorial failure, but the damage has been done.

Kambou: I'm sure they thought they were being helpful. But the negative consequence is the message they're sending to men: Your behavior can be covered up.

Is it the general attitude in Morocco that spousal abuse is acceptable and you should just cover it up?

Begum: Women and girls that I talked to often said they were pressured by family and friends to stay with their abuser, continue with their lives and find ways to carry on instead of seeking support. As far as we know, there are only 10 shelters across the entire country. Women talked about having nowhere to go. One woman said it took her many years to escape with her children, but in the shelter, she could only stay for two months.

How widespread is domestic violence in Morocco?

Begum: In a 2009-2010 government survey of 8,300 women age 18 to 65, two-thirds of the women — both married and unmarried — said they had been victims of some form of domestic violence. Of that number, 55 percent said the violence was at the hands of their husband. Others were abused by fathers or brothers. Only 3 percent of women whose husbands had abused them reported it to the police.

One woman I talked with was burned with a barbecue skewer. When she went to the police, they asked her if there were eyewitnesses. There weren't. When they called her husband, he told police she had burned herself. She pleaded: "What woman would burn herself?" But police wouldn't take a report without a witness.

International standards require that legislation on domestic violence allow courts to take into account other forms of evidence such as photos and medical reports.

Some of the women and girls I met talked about being beaten as children, mostly by their fathers or brothers. They thought they were fleeing that violence by getting married only to find themselves victims again. One 18-year-old woman told me she had been married as a child of 16. She fled the violence of her father and married a man 10 years her senior. On her wedding night, he asked her to dance naked in front of him and his friends. He has since raped her, beaten her unconscious. When she went to the police, they did nothing. When she asked for a divorce, he tried to slash her face but slashed her arms instead. It was her father who told her she should stay with her husband even if he tried to kill her. I met her in a shelter. She was incredibly brave. She had decided that enough was enough.

Around the world, 125 countries have laws on the books on domestic violence. What does it take to change attitudes in a country?

Begum: Laws help when they provide protection for women who want to flee and prosecution of perpetrators. It's only recently that we've seen governments in the Middle East and North Africa take steps to respond to domestic violence. In Lebanon, there's a law on family violence just two years old, but organizations have done a lot of work raising awareness about the law. The new law enables a woman to get a restraining order against an abuser, establishes shelters for abused women and establishes family violence units within the police force. A shortcoming is that the Lebanon law fails to criminalize marital rape. Countries in North Africa are still behind in implementation: There is impunity for the perpetrators, so they continue the violence.

Kambou: Getting laws on the books is just one prong in a strategy to combat domestic violence. If police and the judiciary don't take it seriously, if they haven't been trained in how to welcome victims of violence seeking recourse, if they're not seeking ways to prevent further harm to the women, it doesn't matter how good the laws are.

Are there countries that have made progress in changing attitudes about domestic violence?

Is it possible that the show telling women how to cover up bruises with makeup could lead to more open discussion of domestic violence?

Begum: This topic is on the table now. After the makeup segment aired, there was a very quick response by activists and by regular people, outraged by what they saw. They saw it as sending the wrong message to survivors of domestic violence. It has gotten Moroccans talking about the issue. You need to shift the attitude from "She deserved it" to "This is a crime."