Accessibility links
Tech Award 2016 Winners: Projects To Help The Poor That Have Staying Power : Goats and Soda The 6 winners include a job app for out-of-work youth, radio shows that talk about sex and love and a solar lamp you can pay off in tiny increments. 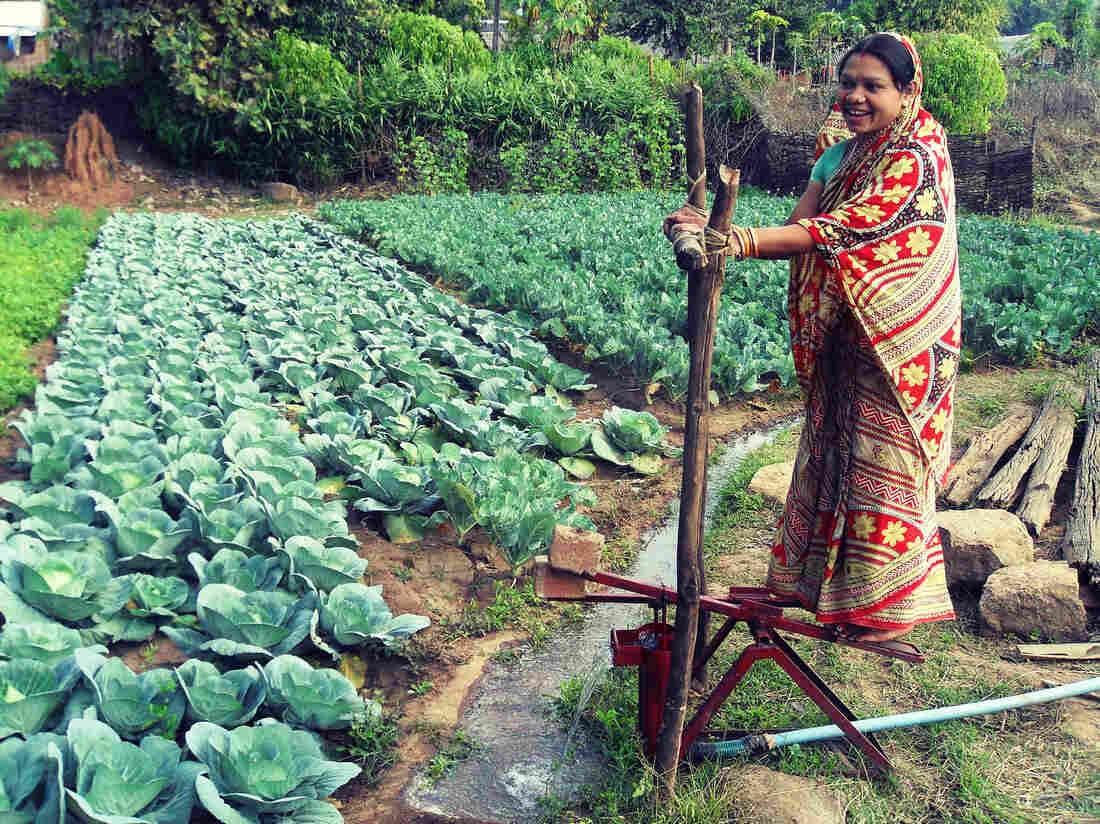 A woman uses the IDE-India foot-powered pump to suction water out of the ground and irrigate her crops. IDE-India hide caption 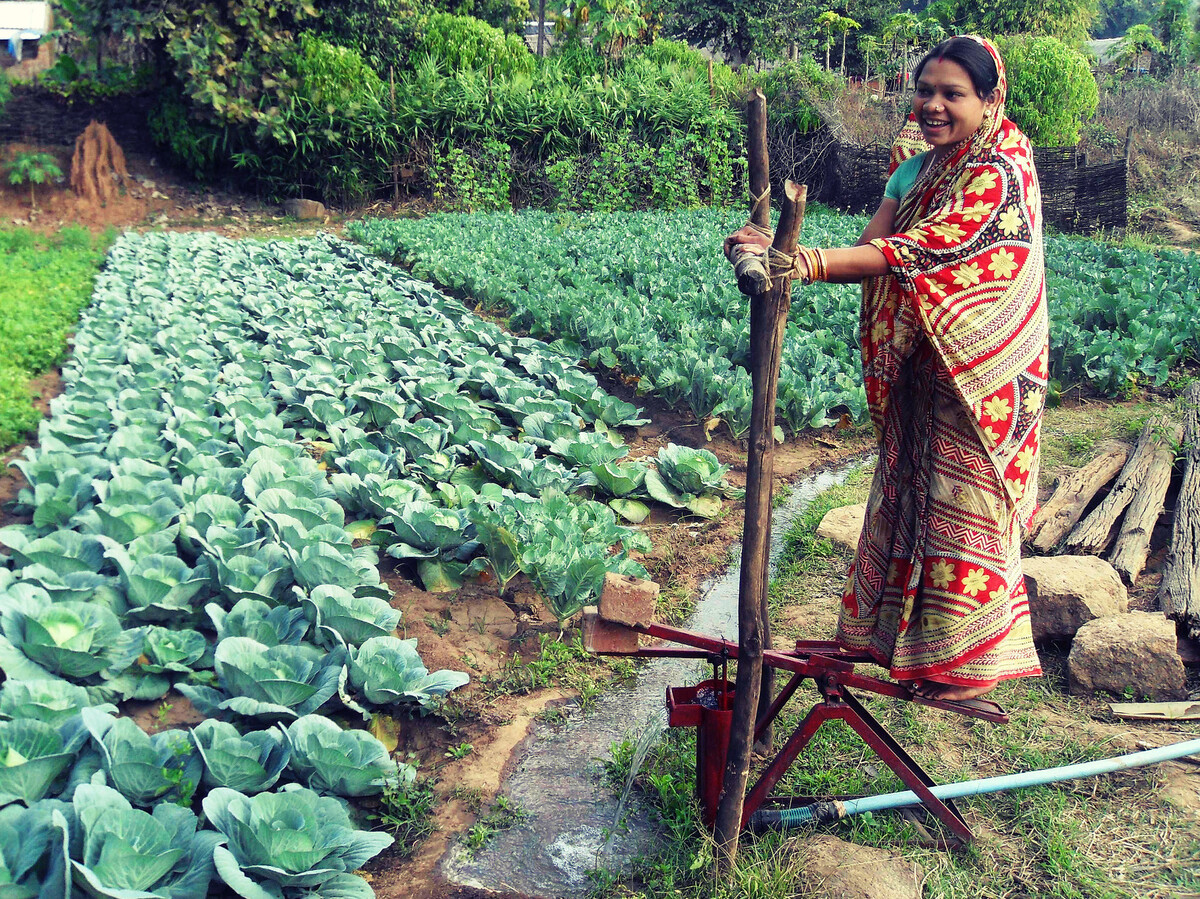 A woman uses the IDE-India foot-powered pump to suction water out of the ground and irrigate her crops.

Great ideas are a dime a dozen. The question is: How do you get 'em to stick?

That's the theme of this year's Tech Awards. The annual program, hosted by The Tech Museum of Innovation in San Jose, Calif., shines a spotlight on startups that use technology to make lives better in poor countries.

But this year, the judging committee — which includes professors from Stanford, Berkeley and Santa Clara University — did something a little different. They looked back at 15 years of winners to find the projects and companies that had not only survived but thrived.

That's something that's pretty hard to do, says Leslie Zane, program director of the Tech Awards. "About 10 to 15 percent of the 287 Tech Award laureates don't even exist anymore."

When the judges narrowed down the criteria even further, only about 90 of the laureates fit the bill: They were still around, still making progress and most important, "they were being used in ways that the judges hadn't foreseen," she says.

Six winners received $50,000 to use as they wish. PATH, a global health nonprofit that works on innovations and advocacy, won the highest honor: the title of the Laureate Impact Award.

Here's a look at the winners and the problems they address. 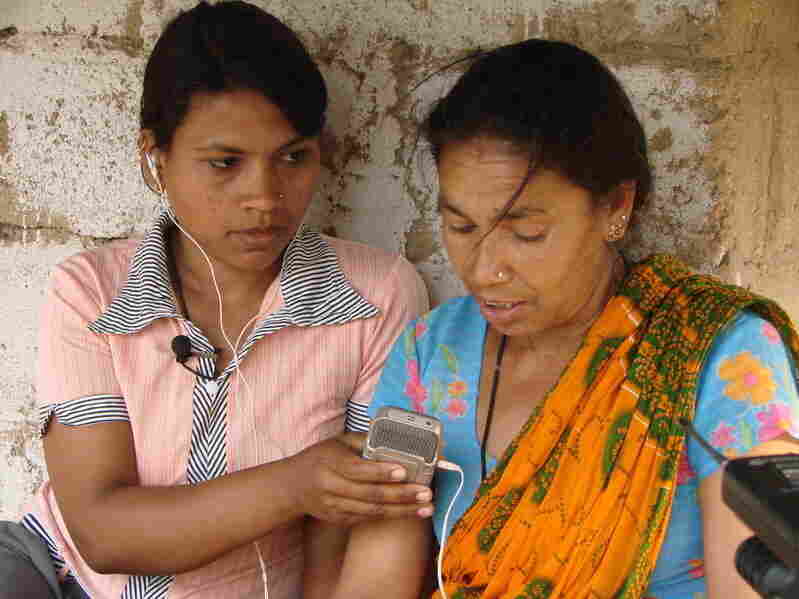 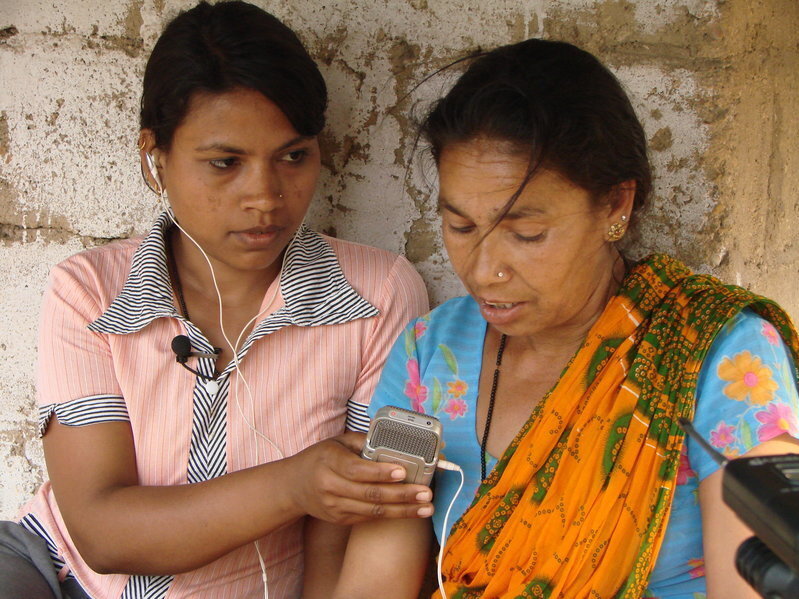 A woman in Nepal interviews her subject for an educational program created by Equal Access International.

Solution: Harness the power of media. A San Francisco-based organization called Equal Access International works with local groups to design, produce and distribute quality educational programming for satellite TV and radio in nine countries across Asia, Africa and the Middle East. Even in remote villages, people can tune in with low-cost receivers.

What made this nonprofit stand out to the judges, says Zane, is that it began out with just one radio show in 2003 and has significantly expanded. The radio show "Chatting With My Best Friend" in Nepal, which tackles topics like sex and love, started off with a goal to reach 10,000 listeners in 2003. Today, it has 7.2 million listeners. And it's inspired "listening clubs" — groups of young people sitting around the radio listening to the show, then talking about the issues afterward — and copycat programs in other countries.

Another example of their work is the radio drama "One Village, A Thousand Voices" in Afghanistan, which creates skits with storylines that touch on everything from human trafficking to solving problems without violence.

2. Problem: No power, no cash to pay for kerosene for home lamps.

Solution: Sell solar devices on an installment plan. A company called Angaza, based in Nairobi and San Francisco, finds companies that make solar lamps, panels and batteries, then embeds special pay-as-you-go tech in its meters. For a $1 to $5 down payment, customers can take home, say, a $15 solar lamp, then pay it off in small increments. If they stop paying, the device switches off. But within a year, they're often able to pay off the full cost so they can keep the device.

"It's a neat model. They realized that their pay-as-you-go platform was the really innovative part," says Craig Stephens, a professor of biology at Santa Clara University who was a judge on this year's panel.

So far, Angaza has provided solar devices to 250,000 people in sub-Saharan Africa. And now they're working on putting their technology into solar-powered cook stoves and water pumps.

3. Problem: Confronting oil and mining companies that pollute the environment. 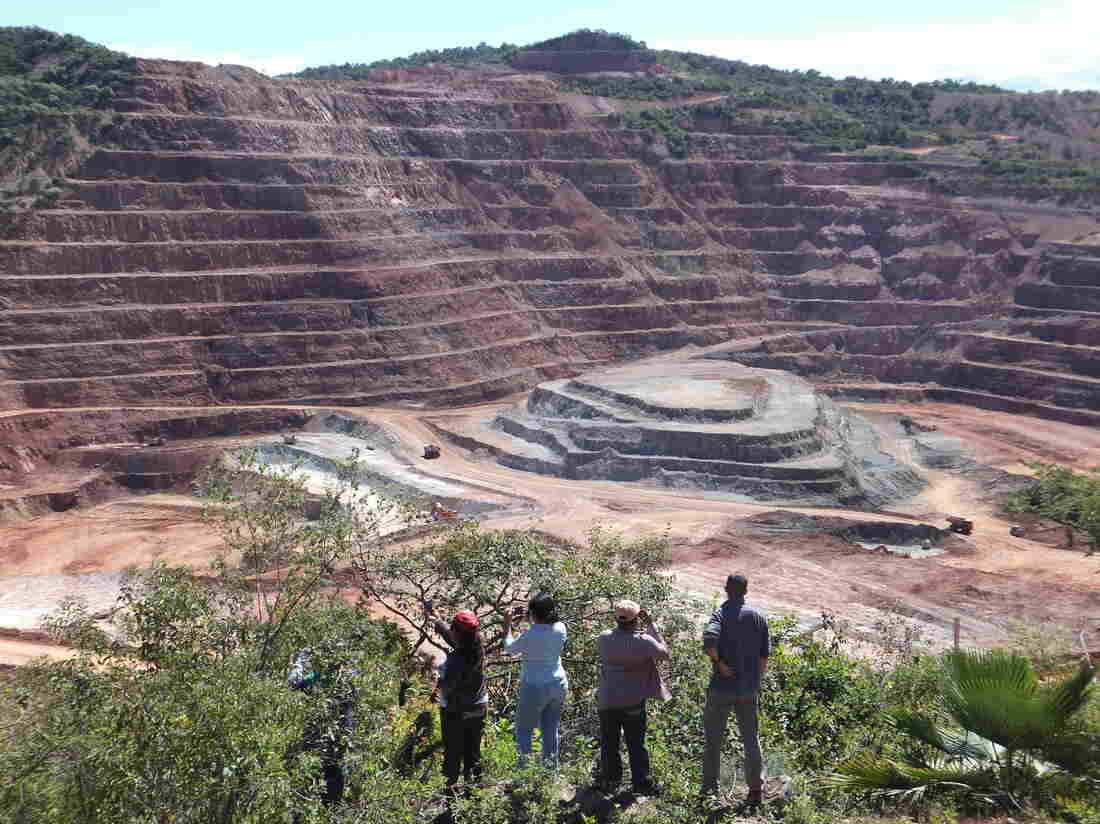 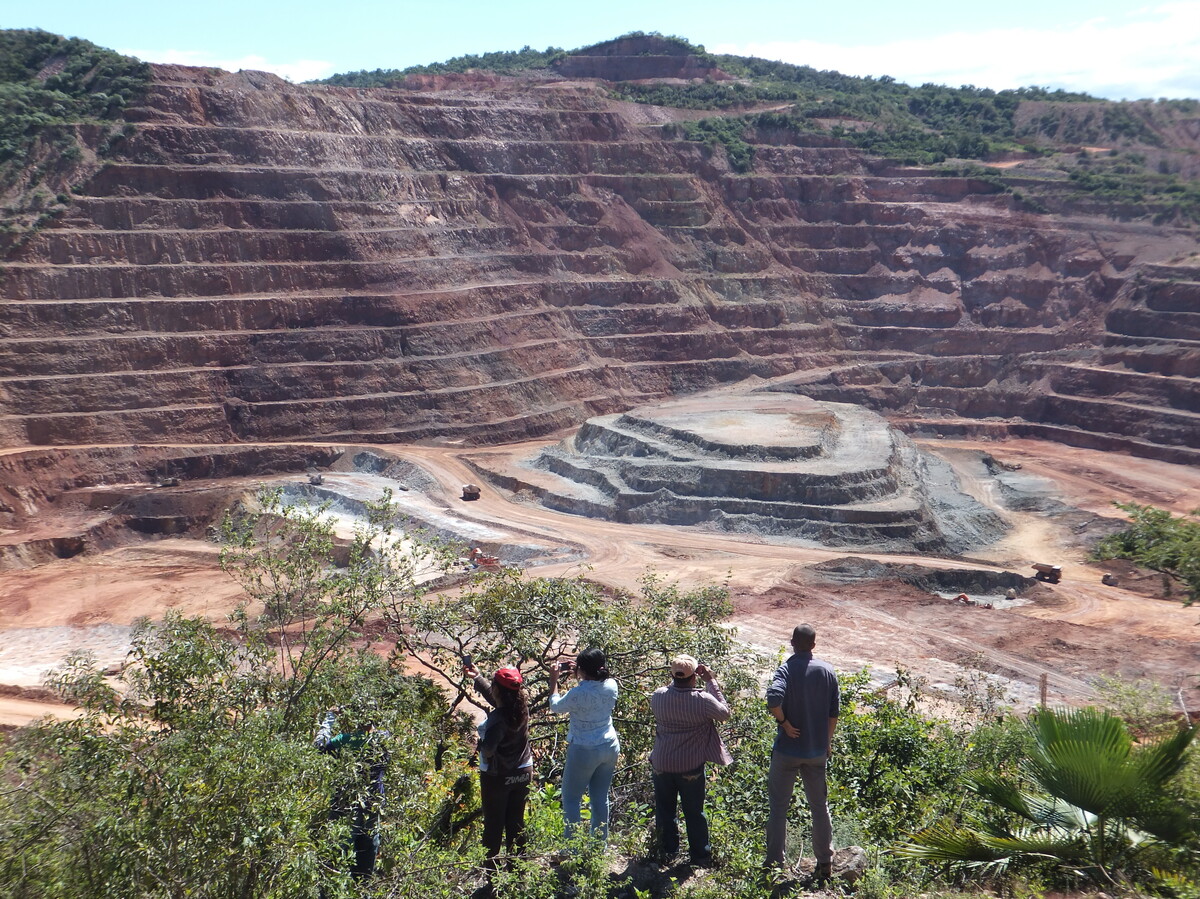 Solution: Give data to the people who want to protest. Source International works with small towns in countries like Guatemala, Mexico and Peru affected by pollution and health problems caused by big oil and mining companies.

A team of scientists and researchers from Italy, Peru and California travel to the areas and gather evidence — like soil, air and water samples. They analyze for signs of pollution and give the information, free of charge, to citizens, who then use it to prove to lawmakers that these big companies have caused serious harm.

Since 2009, Source International has provided support for 21 citizen projects in 11 countries on five continents. In 2013, Source International helped the residents of Guerrero, Mexico win $10 million in compensation for environmental damages caused by a nearby mining company. Stephens says it's those "real wins" that impressed the judges this year.

4. Problem: If it's not raining, there's no way to water the crops.

Solution: Make a cheap water pump that's easy to use. Many poor farmers in India rely on rains from the monsoon season to water their crops. After that, they look for fields near a river or other water source — even though in many parts of India, there's water in the ground right beneath their feet. The issue is that poor farmers don't know how to use irrigation systems or can't afford them.

IDE-India invents affordable irrigation systems, including a foot-powered pump that looks kind of like an elliptical machine from the gym — with bamboo handles. Pedal it and it suctions water from the ground.

To convince farmers to give it a try, the New Delhi-based company travels to villages showing Bollywood-style songs and movies of farmers dancing happily in lush fields. Sure it sounds goofy, but it's paired with real-life demos on how to use the pump. "Their technology is not complicated," says Stephens. "It's their marketing and communications strategy that took the company to another level."

5. Problem: Find a cheaper way to treat babies with jaundice.

Solution: In the U.S., babies with jaundice may be treated with photo-therapy — shining an intense blue light on the baby's skin. But the light machine can cost $3,000 and is not always available in the developing world. The San Francisco-based nonprofit D-Rev designed a $400 version called Brilliance Pro, which runs on minimal power compared to others on the market.

Over the past three years, more than 175,000 infants have been treated with the Brilliance lamp. Zane, director of the Tech Awards, says the lamp has helped drive down the cost of the pricier machines.

6. Problem: Youth unemployment rates are high in the Middle East and Africa — even though there are plenty of jobs to be had.

Solution: Use mobile phones to connect employers with qualified workers. A company called Souktel, which has offices in the West Bank and Delaware, created a special app for simple mobile devices that matches employers with workers.

Imagine a young person in Ramallah who just graduated college in computer science. She's qualified, hopeful, but can't find work in the IT sector. There are jobs out there, but she can't seem to find them — and employers can't find her, either. So companies pay Souktel to post their jobs on their JobMatch platform for a few cents. The college grad can access the app for free.

Since 2006, Souktel has reached 75,000 job seekers in six countries across Africa and Asia, according to a 2016 survey by the World Bank. Job-seekers in the West Bank and Gaza reported higher monthly earnings after finding work through the service.

What The Tech Awards loved most about the company? They're finding new ways the app can help: steering Syrian refugees in Turkey to legal advisers, for example, and helping women entrepreneurs in Iraq share career advice with other women.