Accessibility links
How Doctors Convinced A Street Gang To Agree To A Quarantine In 2015, health workers in Liberia faced a challenge. They had to figure out how to quarantine a street gang that could be spreading Ebola at the height of the epidemic. 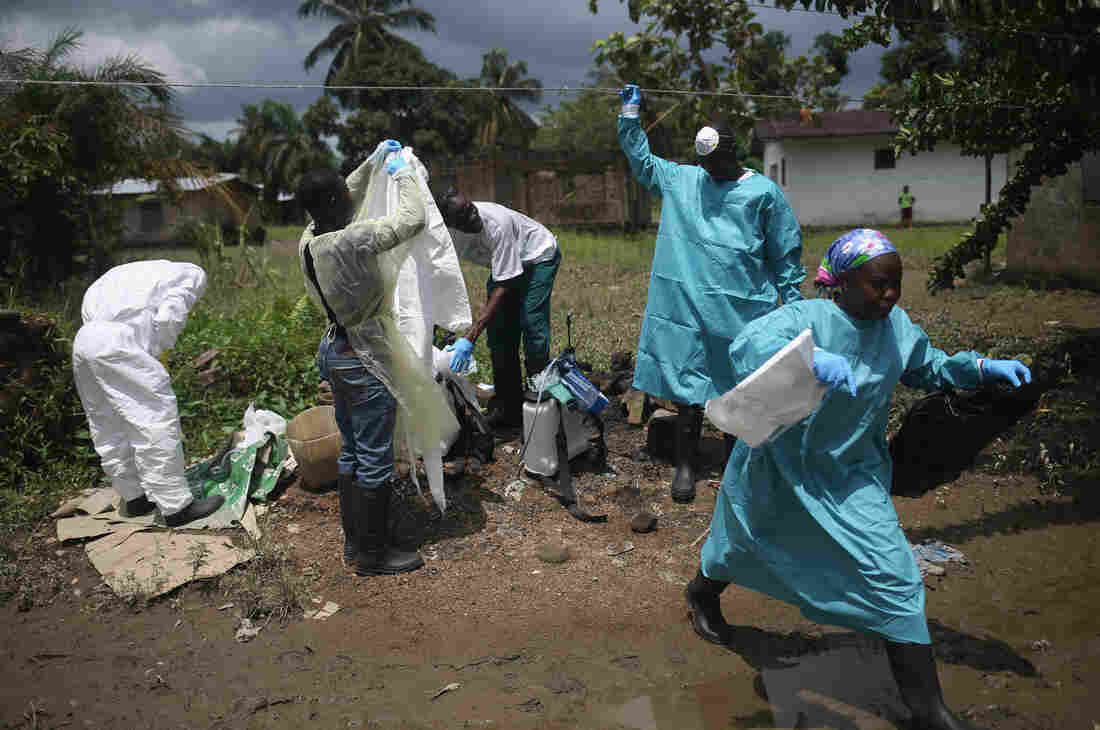 An Ebola burial team dons protective clothing before collecting the body of a woman who'd died from the virus in her home in a suburb of Monrovia, Liberia's capital. John Moore/Getty Images hide caption 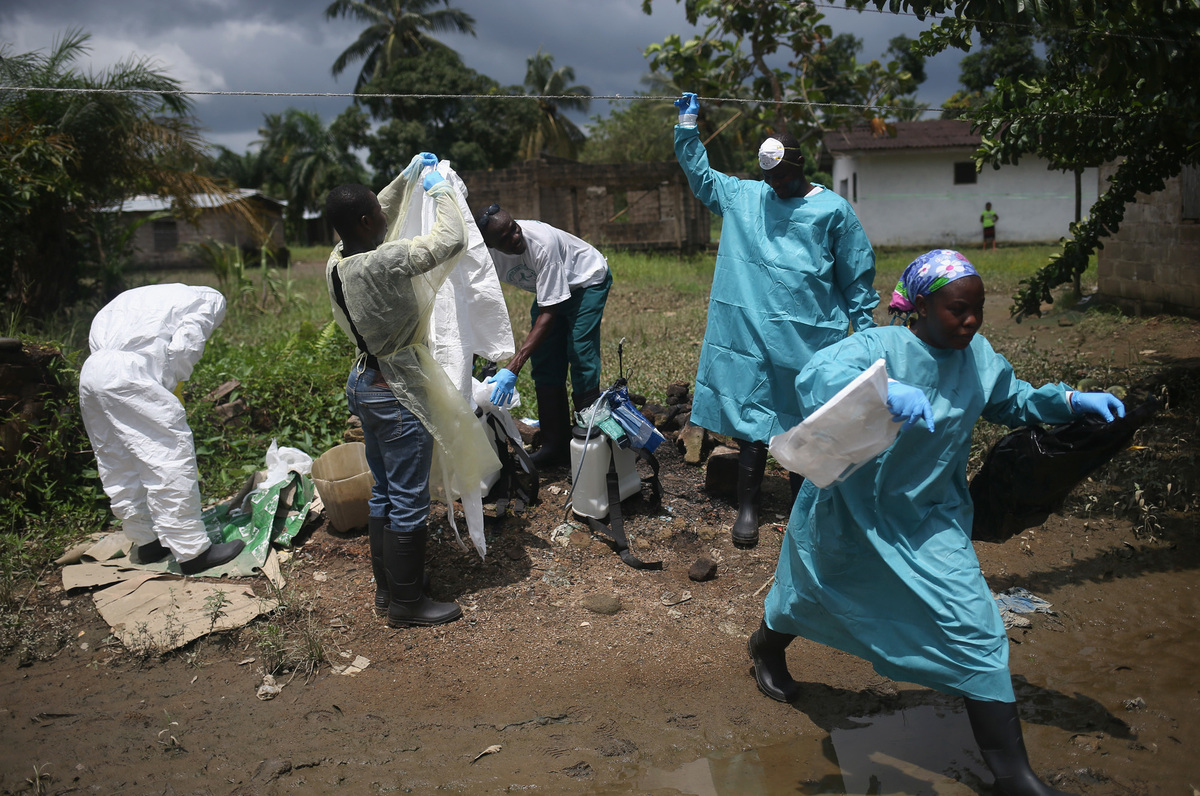 An Ebola burial team dons protective clothing before collecting the body of a woman who'd died from the virus in her home in a suburb of Monrovia, Liberia's capital.

Police discover a body in a warehouse. It's a young man who's been stabbed multiple times. They swab the body — and it tests positive for a deadly infectious disease.

Investigators realize the people who killed him — members of a street gang — may now be spreading the virus without knowing it.

This actually happened in the West African nation of Liberia in 2015. The deadly disease was Ebola.

As soon as public health workers realized that Ebola might be incubating in this gang in the city of Monrovia, the first thing they had to do was track down the members of the gang.

That turned out to be easy.

The hard part was convincing the members to quarantine themselves for 21 days. The young men — like many Liberians — were skeptical of international aid organizations and their government.

"The government had attempted involuntary quarantine and they had a really bad experience in the slums of Monrovia," says Frank Mahoney, an epidemiologist with the Centers for Disease Control and Prevention (CDC). "This is not something that's going to build trust in the community. It's not a way to manage the outbreak."

Many Liberians also worried that if they did go into quarantine, they would never come out. It didn't help that the nation's largest Ebola treatment unit was initially built without an exit.

"They didn't build an exit [for patients] because we weren't thinking about survivors at the time," says Athalia Christie, one of the CDC officials who traveled to Liberia to respond to the outbreak. "And although this was many months later, many people, understandably so, thought that going to an Ebola treatment unit meant that you would not come home."

Adding to this epidemic of fear and mistrust was another fact: The police wanted to arrest the gang members in connection with the stabbing victim's death.

"The police wanted to go in," says Mosoka Fallah, a Liberian epidemiologist. "However, if we allow the police to go in, the gangster will escape and we'll have pretty close to 35 young men who are all high-risk contact on the loose."

So the public health workers convinced the police to stand down. Then they offered incentives for the gang members to quarantine themselves.

"The CDC, we ended up paying the families some support costs because they were no longer able to earn money for their families," Mahoney says. "And the government provided the families with food. So it worked out really well."

But even this was not enough. It turned out some of the young men were addicts, and they needed drugs so they wouldn't go through withdrawal.

So it might seem as if the public health team was asking the government to sort of look the other way while something illegal was happening.

"But I think it'd be like any withdrawal," Mahoney says. "They needed treatment. It wasn't conventional treatment that's for sure."

It was odd for public health officials to be sanctioning illegal drug use. But, again, when you're in the middle of an unfolding catastrophe, you sometimes have to bend the rules — and, in this case, build trust.

To be clear, the CDC did not provide anyone illegal drugs.

But the arrangement produced lots of double takes. One day, a Liberian government minister turned to Mahoney during a discussion and joked about the backdoor drug channel.

Incredibly, the epidemiologists actually managed to quarantine most of the gang members. And no one thought these young men would listen to the authorities.

But by reposing trust in them — and treating the young men as partners — the public health officials had a method that seemed to work better than coercion or trickery.

Still, that wasn't the end of the ordeal. There was one member of the gang they could not track down. During the fight, he'd held down the stabbing victim as the blades came out and the blood splattered.

And now, Mahoney and the others found, he'd run away.

At first, the gang members did not want to reveal Time Bomb's location.

"But as we built friendship and rapport with the other criminals, one of them took us to his house," Fallah says.

There, they found a young man, a young woman and a baby. The epidemiologists asked the young man if he was Time Bomb.

"He said, 'I'm not Time Bomb. Time Bomb has gone out. I'm his younger brother. But if he comes back, I will let you know. And I said, 'OK, thank you very much," Fallah says.

It was at this point that Fallah and Mahoney did something that led to a breakthrough in the case.

"I remember giving the wife $100 and said, 'Go ahead and buy milk for the baby. Feed the baby. And we'll take care of you," Fallah says.

Something changed in the young man's demeanor.

"After I did that, he turned to me and said to me: 'I am Time Bomb," Fallah recounts.

They told Time Bomb and his wife that they would be back that night. They promised they would return with more food.

"There was no electricity. This place was pitch black," Fallah says. "We had to go and drive through the grass. This was like a slum community. It's known to have gangsters. Frank was emphasizing that we had to keep our word. They had to trust us."

This was the key.

They brought food to the family. Time Bomb and his family were grateful.

Fallah and Mahoney asked Time Bomb whether he would be willing to come to the Ebola treatment facility to be quarantined. Time Bomb wasn't ready for that. They said they understood and that they were willing to trust him to do the right thing.

They told him to call them if he got sick.

"And, so, I think it was a matter of building up trust and comfort level for him to talk to us," Mahoney says.

In the end, none of the young gang members contracted Ebola. Not even Time Bomb.

The cluster did not spread in this poor part of Monrovia.

Building those invisible but very real bonds of trust took time, but the CDC's Athalia Christie says it was essential to stopping an outbreak.