Accessibility links
Report: How Is The World Treating People With Disabilities? : Goats and Soda A new report from the UCLA Fielding School of Public Health looks at how far countries have come — and have far they still have to go. 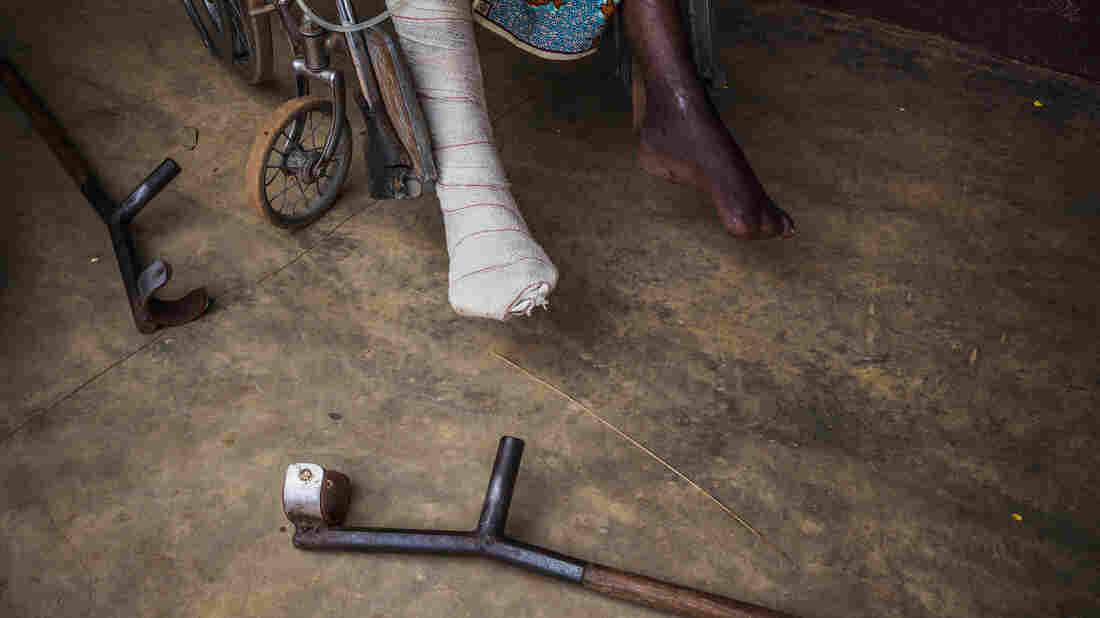 A man at a hospital in Bombuaka, Togo. Celestino Arce/NurPhoto/Getty Images hide caption

In the ten years since the United Nations adopted the Convention on the Rights of Persons with Disabilities, ratified by 168 countries, there has been both progress and stubborn obstacles.

Case in point: When a new transit system in Guatemala City was built in 2010 with raised platforms accessible only by stairs, disability rights activists brought a lawsuit against the system — and won. Now, some of those stations have to provide ramps, says Silvia Yee, senior staff attorney with the Disability Rights Education and Defense Fund.

But there are still problems. People with disabilities still must get to those ramps on broken and crumbling sidewalks with no curb cuts.

A new analysis of the landmark international human rights treaty seeks to document how far countries have come in the past decade and how far they have yet to go. The World Policy Analysis Center at the UCLA Fielding School of Public Health, mapped the global response to disability.

"Persons with disabilities are one of the last groups whose equal rights have been recognized," says Dr. Jody Heymann, dean of the school of public health and lead study scientist of the analysis. "We wanted to see how far we've come in ten years."

Goal: Countries should guarantee the right to quality education at all levels for people with disabilities.

Reality Check: That right is constitutionally guaranteed in only 28 percent of the 193 countries surveyed.

"There are schools that exclude children because they see them as different," says Heymann. But other times, kids can't get to school because of gaps in transportation systems or a lack of medical supplies. "So, for example, a very bright little girl I met in Mexico lived in a one-room hut," Heymann says. "She had spina bifida and didn't have a wheelchair, so she couldn't get to school." Spina bifida is a birth defect that can cause paralysis, as it did in this child's case.

Peru is moving away from schools specifically for disabled children and toward mainstreaming disabled children in public schools. "The problem now is training teachers, and there is some backlash from parents," says Debbie Sharp, project specialist at Mobility International USA. Some parents of able-bodied children object to having their children in classrooms with students with disabilities because they believe it will harm their own child's education. To help put to rest concerns of some parents of non-disabled students, some countries, like Mexico are increasing training of teachers who will work in classrooms with both disabled and non-disabled students, says Yee.

In some areas, teachers start the ball rolling on their own. "I was in a rural area of Sri Lanka," says Wodatch. "I went to a couple of schools where they didn't have any program to educate kids with disabilities. So the teachers developed an after-school program on their own. They weren't paid for it."

Goal: Countries should guarantee the right of persons with disabilities to work in an environment that is open, inclusive and accessible.

Reality Check: Only 18 percent of 193 constitutions guarantee the right of people with disabilities to work.

Other Protections: Of the 25 most populous countries at all income levels, 14 have broad protections for people with disabilities against discrimination in the work place.

Around the world, there are nearly half a billion working age people with disabilities, according to the analysis. "The need is huge," says Heymann.

Brazil passed a law in 2015, according to the UCLA analysis, protecting workers against discrimination in hiring, promotions and training as well as guaranteeing equal pay for equal work.

Some countries, like Japan and Montenegro, have set a quota, requiring that companies employ a specified percentage of disabled workers or pay a fine, says Wodatch. But it's no guarantee. The fines are usually low enough that some companies pay the fine rather than hire disabled workers, he says.

Peru also has a quota system with employers asked to hire 5 percent of workers with disabilities in the public sector and 3 percent in the private sector, says Silvia But employers can stretch the definition of disability. "You can get deliberate resistance," says Yee. "Employers will count people [as disabled] who wear glasses, or who get headaches frequently."

Goal: Countries should guarantee people with disabilities the right to the highest possible standard of health without discrimination.

Reality Check: Only 26 percent of 193 constitutions explicitly guarantee the right to health to people with disabilities.

Other Protections: Some countries have passed work laws to help parents and caretakers. Peru, which offers 90 days of paid leave to new mothers, extends that benefit by 30 days if the baby is born with a disability. In Armenia, working parents are guaranteed paid leave to accompany disabled children to health care and treatment appointments.

The U.N. treaty has had an impact on countries, rich and poor alike. Even in a highly developed country like Canada, ratification of the U.N. treaty led to its health care system ensuring that interpretive services are provided for deaf patients, says Heymann.

And whether inspired by the U.N. treaty, or springing up organically, less developed countries are also making changes. "We're seeing a lot of disabled women and girls working on health care," says Susan Sygall, CEO of Mobility International USA. "They're interested in making sure disabled women have access to health care, access to information on disease like HIV/AIDS and information about violence against women services."

But in some poor areas of the world, health care access and quality is poor for everyone, and the fight for improved services for people with disabilities is an uphill battle. "In some countries I've been in, Mongolia, Armenia, Georgia, health care has not been very good to begin with," says Wodatch. "The system is not there even to deliver babies. Having a doctor's office be accessible is only amusing to them."