Accessibility links
Researchers Strapped Fitness Devices On Hadza Men And Women To See How Active They Are : Goats and Soda Westerners are often looking for short, intense workouts. A new study points out a different path to fitness.

Staying Fit Isn't A New Year's Resolution For These Hunter-Gatherers

Staying Fit Isn't A New Year's Resolution For These Hunter-Gatherers 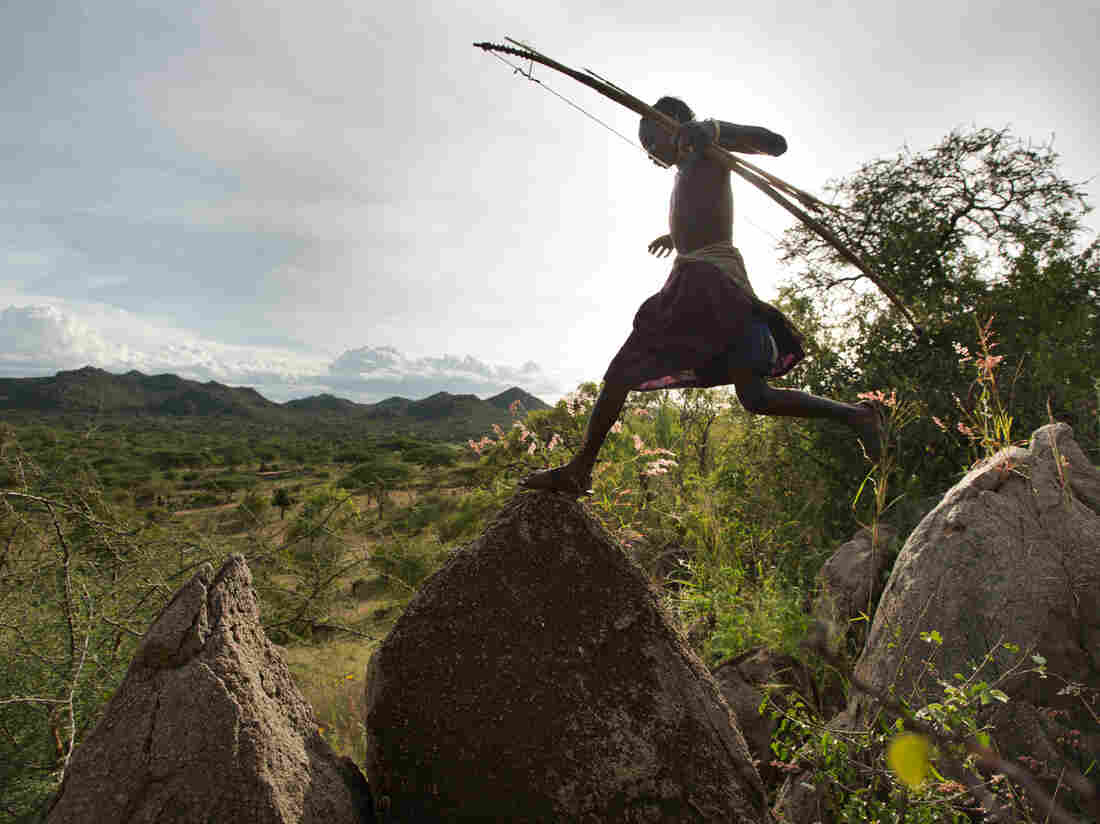 A Hadza man on a hunt, with his bow and arrow. Matthieu Paley/National Geographic hide caption 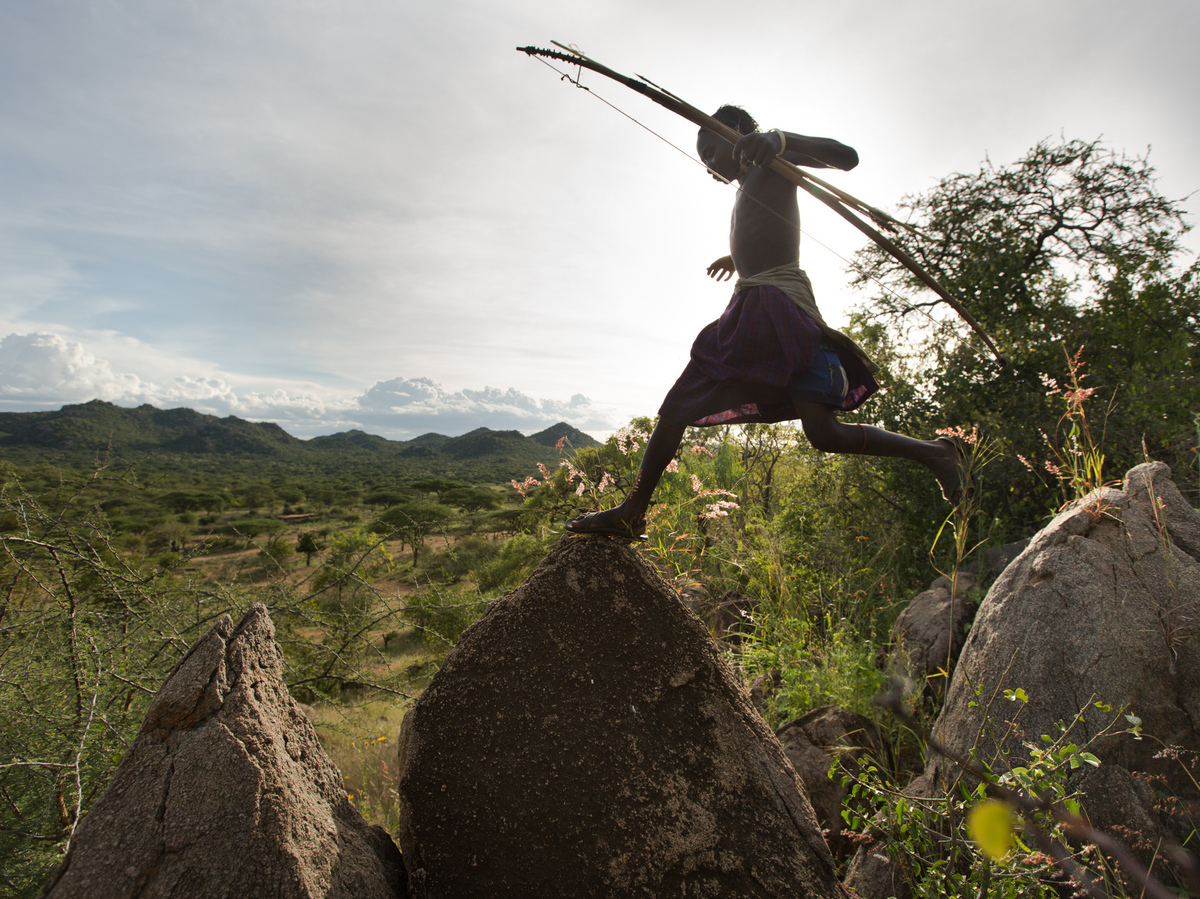 A Hadza man on a hunt, with his bow and arrow.

After the countdown to New Year's, Americans start thinking about upping the intensity of their workouts or making room in their schedule for a boot camp.

But the men and women of the Hadza, a group of hunter-gatherers in Northern Tanzania, have no need for resolutions to be more active.

Anthropologist Herman Pontzer, an associate professor at Hunter College, and his collaborators distributed GPS units with heart rate monitors to a group of Hadza adults. The goal was to use the gadgets to pinpoint the level of physical activity in Hadza life.

What Pontzer and his collaborators reported in a study published in October in the American Journal of Human Biology is that the Hadza are moving much of the time, typically in moderate and sustained activity rather than vigorous bursts.

There's a theory that human physiology evolved through hunting and gathering to require aerobic exercise, so that's what the researchers were interested in testing. The 46 subjects — 19 male and 27 female with a mean age of 32.7 — had their heart rates tracked over four two-week periods, covering both rainy and dry seasons. This data was matched up with what the researchers have learned about the Hadza's cardiovascular health by testing 198 subjects (including 30 also in the heart-rate study). Their findings: An examination of blood pressure, cholesterol and other biomarkers shows no evidence of risk factors for cardiovascular disease.

The typical Hadza day begins at sunrise. The Hadza wake up in grass huts in the middle of the savanna and mill about while figuring out plans and eating breakfast.

Then the men set out with a bow and poison-tipped arrows, covering miles and miles to track prey, such as giraffes, impalas and zebras. "They don't run," Pontzer notes, unless, of course, "someone jumps out of the bushes at them." But they walk pretty much continuously, with just a single break at midday to avoid the worst heat. If they're striking out with hunting, Pontzer says, they might chop into trees to get wild honey.

Women go out in groups, along with children under the age of 2, who are usually wrapped up snug on mom's back. They pick berries at such a rapid clip that Pontzer admits he couldn't keep up with the pace. The tougher task is digging into the hard and rocky ground with a sharpened stick to collect tubers, which are a staple of their diet. The upper body workout can take hours, Pontzer says.

It all adds up to about 135 minutes per day of moderate-to-vigorous physical activity. Contrast that to the current recommendations from the U.S. Office of Disease Prevention and Health Promotion of at least 150 minutes per week.

And only about 10 percent of Americans achieve that guideline, Pontzer says.

This Hadza study is "very relevant," says Oxford University associate professor Charlie Foster, who is deputy director of the research group on Population Approaches to Non-Communicable Disease Prevention and president of the International Society for Physical Activity and Health. In a sense, he says, humans are all still hunter-gatherers. "We're good at gathering food whenever we can. We just don't have to go very far," Foster says. "Within 100 meters of your front door, you can probably buy a coffee."

And what many humans are hunting for these days is an exercise strategy that requires as little time as possible — hence, the rising popularity in the Western world of short, high-intensity interval training programs, says Foster, who was not part of the study. So one detail about the Hadza research that stands out to him is that they pretty much take the opposite approach.

Is there a way for Westerners to design an equivalent exercise to tuber digging? "Maybe if you garden aggressively," Pontzer says. But he advises against mimicking the exact patterns of Hadza lives and instead recommends thinking about what you can learn from them.

"What the Hadza study says is that you don't block out an hour. You put a bit of activity into everything you do. Forget this artificial distinction between exercise and life. Try to change things so you're doing them more actively," Pontzer says.

And keep on doing them as the years go by. One of the researchers' key findings is that the level of "moderate and vigorous physical activity" doesn't drop off as Hadza age. "You see 60- and 70-year-old men and women keeping up," Pontzer adds. "There's no sitting on a La-Z-Boy."

The same is true with Hadza kids. As soon as toddlers are old enough to skip foraging with mom, they join a mob of children who basically just run around all day, Pontzer says. Other than some limited opportunities to go to school, "a Hadza kid has never spent a day inside because there is no inside," he says.

Maybe that's another lesson to learn from the Hadza, Foster adds. When it comes to exercise, he says, "You're never too young to start."