Accessibility links
Doctors' Strike Takes A Toll On Health Care In Kenya : Goats and Soda They went on strike a month ago, asking for a raise and better training and equipment. So far the government hasn't met their demands. 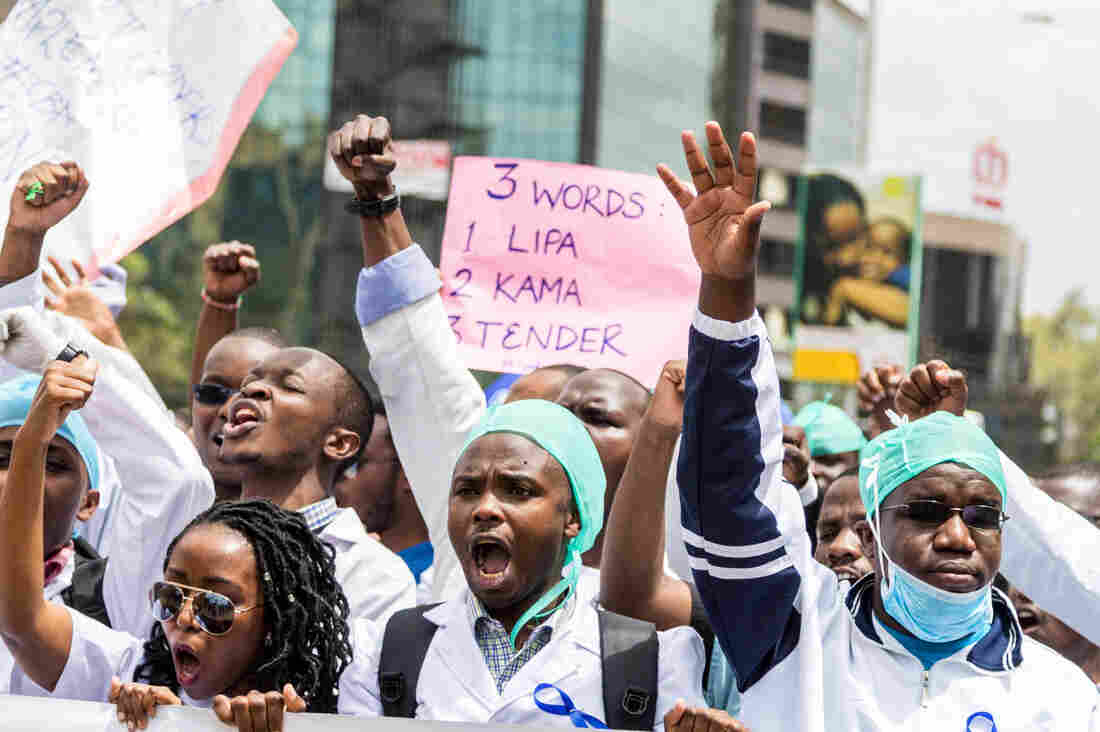 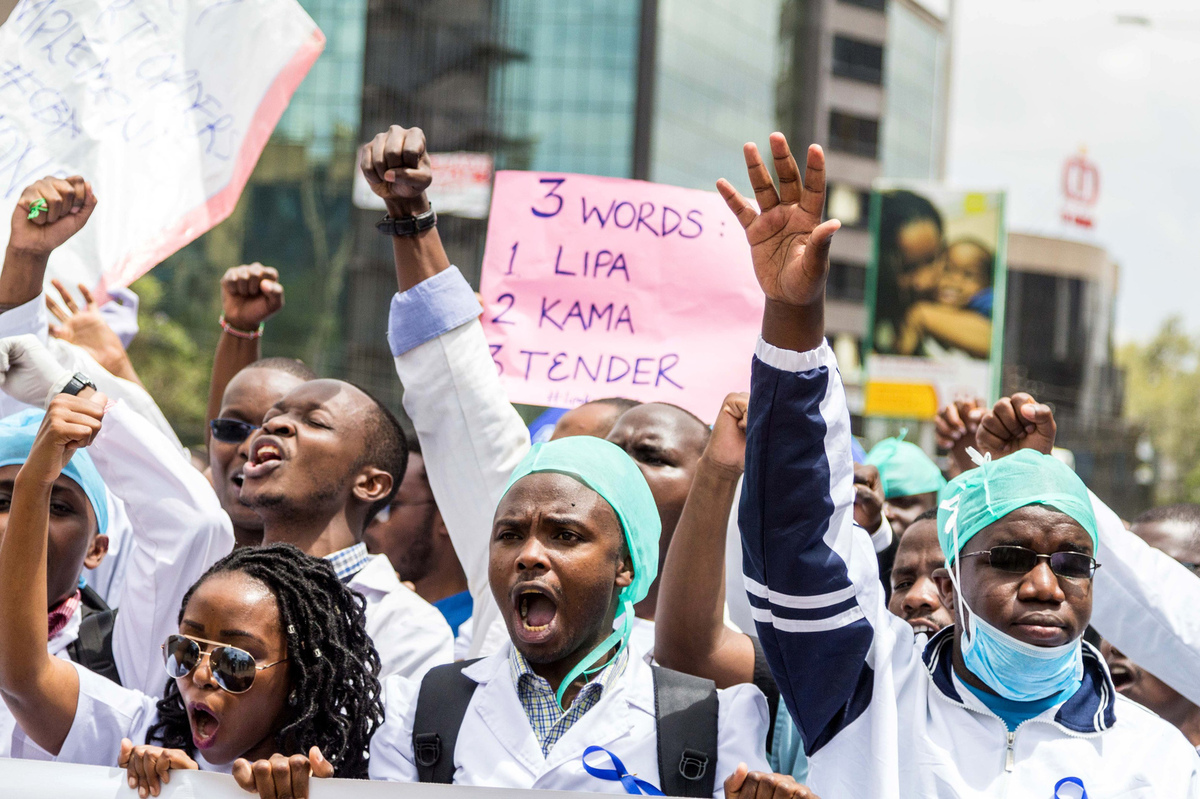 Health care workers stage a protest during the ongoing doctors' strike in Kenya.

The halls of the Kiambu County Hospital just outside Nairobi are empty. This is normally a bustling place but on Thursday entire wings are closed.

Only in the emergency room are there a scattering of patients. Moms with babies sit languidly on metal chairs. Men with broken bones and some with serious injuries are just hoping to be treated.

But they probably won't be seen by doctors. A doctor's strike that began last month in Kenya has now entered its second month. Physicians at public hospitals want more money and better medical equipment, but the government says it can't afford to meet their demands.

The strike has left millions of Kenyans without proper health care and has also overwhelmed some of the country's private hospitals.

The nurses at the public hospitals are not on strike, so they're doing whatever they can. They're the ones running the ER. But a patient who needs complicated care and can't afford a private hospital is out of luck.

The only doctor I found at the Kiambu hospital is David Kariuki, who is on strike but showed up to perform his administrative duties.

"The current strike is about better working conditions for doctors, especially those within the public health sector," he said.

A doctor right out of school in Kenya makes about $10,000 a year in the public health system. To earn more money, many of them are lured abroad or into the private hospitals that many Kenyans can't afford.

That means, Kariuki said, that "the public health care system continues to be strained, because you have fewer doctors to see a growing population, so everyone would get overworked" and more stressed out.

And it's not like there were a lot of doctors on duty before the strike: 5,000 physicians in the public sector serve a population of nearly 50 million.

In the emergency room, I find Masa Mawili, who came to the hospital because of his foot. It was so swollen that it hardly fit in his sandal, and the swelling extended all the way to his calf. He doesn't know what caused the swelling.

He said he had already seen the nurses but they couldn't tell him what was wrong with his foot. So he sat and waited hours in the hope that a doctor would show up — some of them have been working despite the strike.

On Wednesday, Kenyan President Uhuru Kenyatta met with the Kenya Medical Practitioners, Pharmacists and Dentists Union for hours. Late at night, his government put out an offer: Some doctors would get a more than 100 percent raise, others significantly less.

The doctors are supposed to respond by Friday, but they seem determined to hold out for the 300 percent raise that the government agreed to in a 2013 collective bargaining agreement but has since walked away from.

But it's not just about the money.

"The CBA [collective bargaining agreement] once signed will make sure more doctors are trained to improve on service delivery," the union tweeted.

At the hospital I visited, some patients sided with the doctors but others took the government's side.

Paul Kagiri, whose college-age son was given the OK to go to college after a physical at the hospital, said that what the doctors are asking for is "very, very, very high."

The government can't afford to pay them. And there are reports of people who sought help at public hospitals and ended up dying. Right now, he said, it's time to think about the wanjiku — the ordinary people.

"Only the wanjiku right now is suffering a lot," Kagiri said. "And instead of wanjiku suffering why [don't the doctors give back to the public?"