Accessibility links
On A Park Bench, A Patient Who's Depressed May Open Up : Goats and Soda A psychiatrist in Zimbabwe had a brainstorm. What if there were a place where people who are depressed could seek counseling without having to go to a clinic.

The Friendship Bench Can Help Chase The Blues Away

The Friendship Bench Can Help Chase The Blues Away 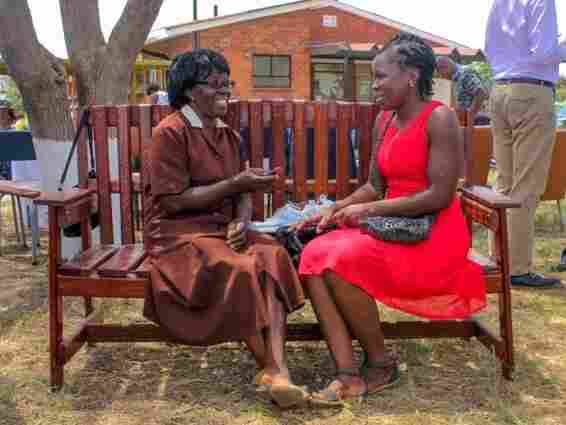 A community counselor, left, speaks to a patient on the Friendship Bench in Zimbabwe. Courtesy of King's College London hide caption 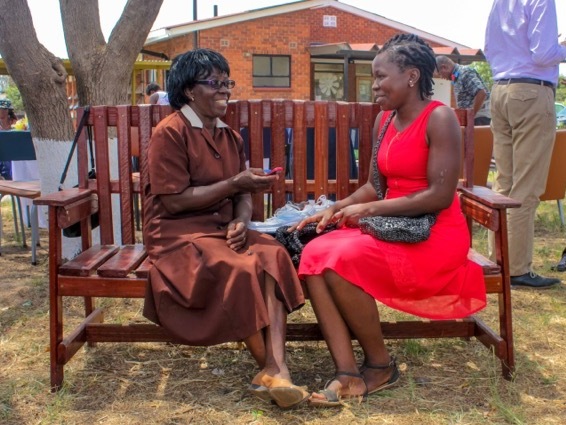 A community counselor, left, speaks to a patient on the Friendship Bench in Zimbabwe.

Things were already going pretty badly for Florence Manyande. Then one day last spring, while walking down the street, she was hit by a car.

"This woman saw, and she pulled me out of the road." recalls Manyande, 50. "She tried to talk to me, but I couldn't talk then. I had a lot on my mind."

Her run of bad luck had begun in 2010, when Manyande's husband skipped out on her and her three kids. "I had no way to pay school fees for my children," she says, and no way to pay rent. "Even my relatives were shunning me. They couldn't take me in because they said, 'We have our own problems.'"

By the time Manyande had her accident, she was thinking about killing herself.

Then her fortune took a turn. The woman who found her, injured, on the road happened to be a health worker. She took Manyande to the clinic to get bandaged up. "While I was there," Manyande says, "she introduced me to the Friendship Bench."

A Friendship Bench is quite literally a park bench — with a higher calling. In Zimbabwe, where Manyande lives, friendship benches are located on the grounds of medical clinics around Harare and other major cities. They're a safe place where trained community members counsel folks struggling with what they, in the local Shona language, call kufungisisa ("thinking too much") or what Americans call depression.

Dr. Dixon Chibanda, a psychiatrist at the University of Zimbabwe, came up with the name Friendship Bench — or chigaro che hushamwari in Shona — back in 2006. In Zimbabwe, as in most places, there's a lot of stigma around mental illness. Patients may feel uncomfortable with the idea of going to a mental health clinic. Traditionally, Zimbabweans with depression may see a healer about an exorcism — many view mental illness as a curse. And there is a shortage of professional help: 13 psychiatrists serve a population of 13 million.

While completing his master's in public health, Chibanda was looking for a solution. After speaking with various community leaders and health workers, he figured out that while people were loathe to head to a mental clinic and speak with a lab-coated medical professional about their mental health, they were generally willing to sit on a park bench and share their worries with someone within their own community,

At these benches, community counselors and patients meet weekly to discuss intimate issues — and develop a plan to overcome difficulties. As part of the treatment, there are also group therapy sessions, when patients gather and sit around the bench. "It's all about empowering people to go and solve their own problems," Chibanda says.

The strategy seems to be working, according to a new study published in JAMA. The study followed 573 patients in Harare with anxiety or depression for a six-month period. Half of them received the standard treatment: A nurse spoke to them about what they were going through and prescribed medication as needed. The other half went to a Friendship Bench to meet with community members who'd been trained to give both one-on-one and group counseling.

Six months later, half of those who received basic treatment still showed symptoms of depression, whereas only 13 percent of those who participated in Friendship Bench program still had symptoms.

When There's No Therapist, How Can The Depressed Find Help?

Mental health interventions often "select good therapists and basically bus them in," adds Dr. Melanie Abas, a psychiatrist at King's College London and one of the study's co-authors. "This is really one of the few examples where treatments for common mental health problems have been delivered by people who actually live and work in the community."

Most of the Friendship Bench counselors are older women who already command respect within their communities. And they've played a big role in stemming fears about seeking help for mental health issues,

The counselors avoid the Western terms "depression" and "anxiety," which to many might sound foreign and unrelatable. Instead, the counselors may suggest that someone has been "thinking a bit too much" and guide them through the different stages of talk therapy, which in Shona are called kuvhura pfungwa ("opening of the mind"), kusimudzira ("uplifting"), and kusimbisa ("strengthening"). "We use indigenous terms," Chibanda says. "These are words that people in the community can identify with."

Traditionally, Zimbabweans with depression may see a healer about an exorcism — many view mental illness as a curse, Abas notes. People are more likely to admit they've got mental health issues when offered the relatively low-key alternative of chatting on a park bench.

The Friendship Bench initiative is now being expanded throughout Zimbabwe. So far, 27,000 people suffering from common mental health disorders have tried the program.

This strategy is not without drawbacks, Abas says. The community counselors require continual training and supervision, which is why they report to a district supervisor with more formal medical and psychological training. And funding is another issue. Right now, the program depends on grant money; the researchers say that the government will eventually have to pitch in to sustain the program.

Despite those complications, "it's just a great model, and it's impressive," says Brandon Kohrt, an assistant professor of psychiatry at Duke University who wasn't involved in the development of the Friendship Bench program or in the recent study.

"It's often very stigmatizing to have to go to a mental health professional," Kohrt says. "So it's great that their approach didn't require people to go to a location — like a psychiatric hospital — that was seen as somewhere only really ill incurable people went."

The program also attests to the power of community, says Kohrt, and harnessing the community to support those suffering mental illness. He believes that "the lessons from this can be applied globally, even in high income countries."

For Florence Manyande, at least, beyond helping her quell suicidal thoughts, the Friendship Bench has helped her build the sort of community she had been craving. At a group therapy session, Manyande says, "I made a friend who introduced me to a sister who had accommodation." No longer homeless, Manyande learned to crochet bags, which she now sells to make money until she can find full-time employment. "My relationship with my relatives has also improved," she says, "now that I don't go to their houses begging for money or food."

Most important, "I realized at the Friendship Bench I have someone who is willing to listen to my problems," she says. "I was so happy about that."