Accessibility links
In Nigeria, Doctors Without Borders Is Now Handing Out Food As Well As Medical Care : Goats and Soda In Nigeria, the food crisis is so severe that when MSF sees families to treat disease or provide vaccinations, they're starting to distribute food as well.

Why Doctors Without Borders Is Adding Food To Its Medical Bag

Why Doctors Without Borders Is Adding Food To Its Medical Bag 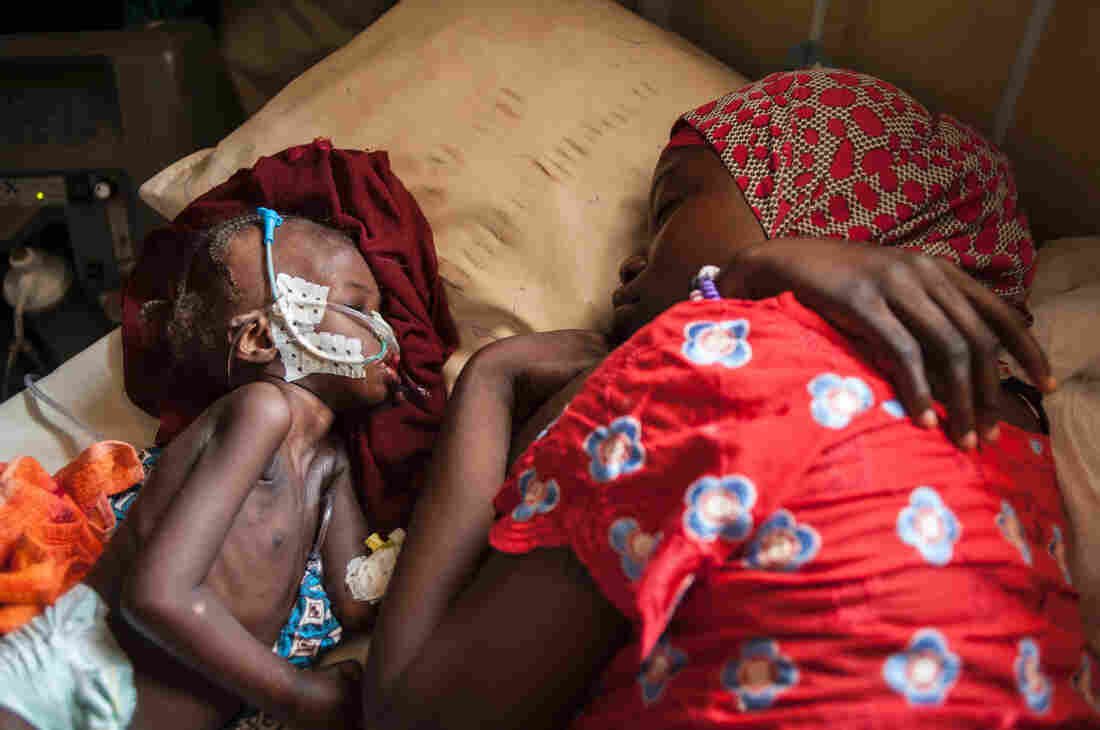 A woman and a child suffering from severe malnutrition sleep on a bed at a therapeutic feeding center in northeastern Nigeria. Stefan Heunis /AFP/Getty Images hide caption 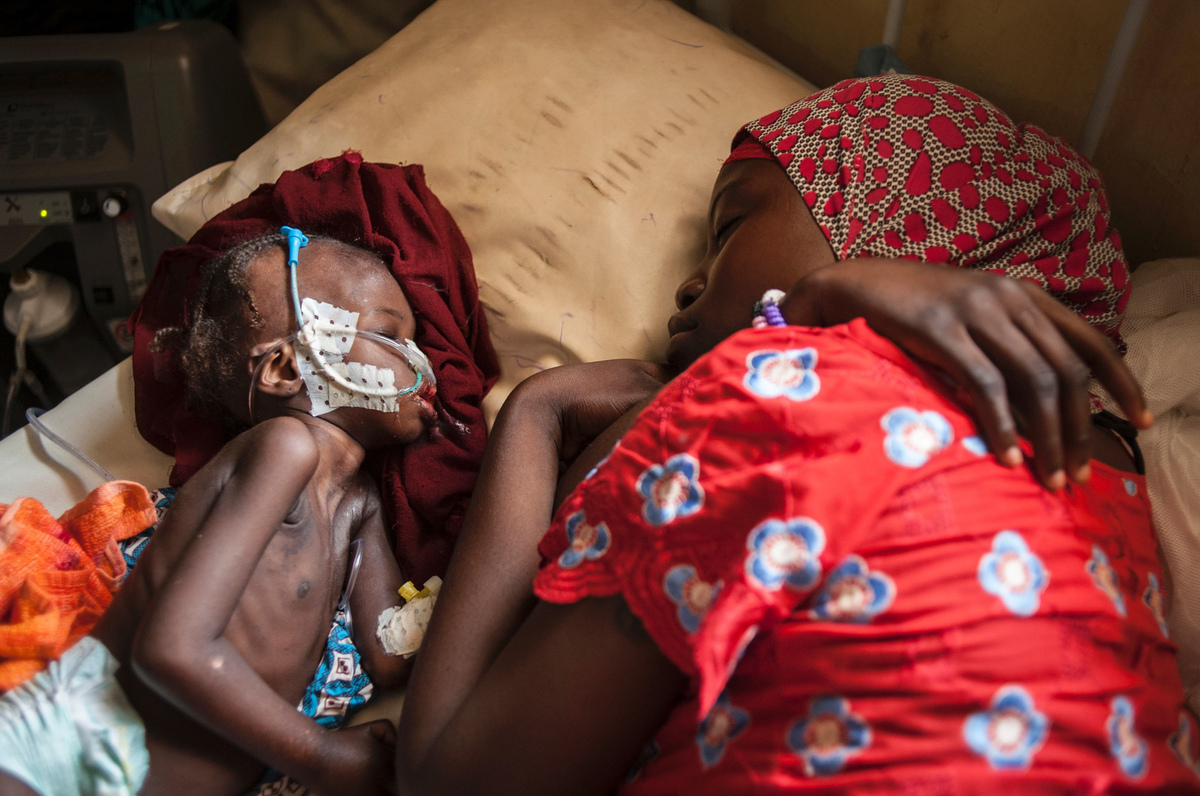 A woman and a child suffering from severe malnutrition sleep on a bed at a therapeutic feeding center in northeastern Nigeria.

Medecins Sans Frontieres, the medical humanitarian organization, has added a basic item to its medical bag of drugs, stethoscopes and syringes: food.

The group, also known as Doctors Without Borders, has done it in response to an unprecedented food crisis in northern Nigeria's Borno State. "I've been with Medecins Sans Frontieres for about five years, and this is the first time I've seen such massive food distribution," says Dr. Kerstin Hanson, a pediatrician specializing in childhood malnutrition and nutrition and pediatrics technical adviser to MSF. "The problem is not just medical care. The problem is that there is no food."

Some 2.6 million Nigerians have been displaced since 2009 when Boko Haram, a militant Islamist group, began attacks in northeastern Nigeria, according to the U.N.'s Office for the Coordination of Humanitarian Affairs. The displaced persons have largely gone to Maiduguri, the capital of Borno State, and to neighboring countries including Chad, Cameroon and Niger. In those four countries, an estimated 480,000 children suffer from acute severe malnutrition, according to MSF.

"This population has greatly suffered. People aren't able to grow or obtain food as they normally would," says Hanson. "And transportation routes have been cut off. A lot of men have been killed or are involved in the conflict, and women and children have been left alone to deal with the situation."

Other organizations are stepping up their food response, as well. In December 2016, for example, the World Food Programme, the food arm of the United Nations, delivered food or cash to more than a million Nigerians in conflict affected areas of the country — up from assisting 160,000 people in October. WFP intends to continue to pour more food into the area but requires more funding. So the U.N. organization is ramping up its appeals to governments and private donors.

"Late last year we started a rapid response mechanism to allow us to get to more people faster in Borno and Yobe [a state in northeast Nigeria]. We have achieved a lot in the past months, and plan to do more," Abdou Dieng, WFP's Regional Director for West and Central Africa said in an e-mail.

MSF is starting to use what Hanson calls "precious access" to children and families. When they see families to treat disease or provide vaccinations, it's also a perfect time to distribute food. In the last three months of 2016, MSF — working with U.N., government and other humanitarian organizations — distributed enough food to feed 26,000 families for two weeks.

Making a diagnosis of severe malnutrition in a child six months to five years is fairly simple. A health worker, volunteer or even a parent uses a special plastic bracelet to measure the circumference of the child's mid-upper arm. A measurement less than 115 millimeters, about 4.5 inches, means the child is severely malnourished. Measures of 115 mm to 126 mm, or about 4.5 inches to 5 inches, mean the child is moderately malnourished. MSF is seeking to treat more children at this stage to help them avoid slipping into severe malnutrition.

When people are severely malnourished, the body begins to essentially feed off its own muscles and tissue, and the person loses all desire to eat. At that point, children should be hospitalized and given special therapeutic milk, rich in carbohydrates but low in some nutrients that a severely malnourished child initially has trouble tolerating, like protein, sodium and fats. When they're stabilized, the child is given more protein and fats in the form of ready-to-use packets of a dense, peanut-based food, and sent home. "About 20 percent of the kids we see need to be hospitalized," says Hanson. Those who are moderately malnourished can be sent home immediately with packets of the same energy-packed peanut paste.

But what happens when a starving child is stabilized and goes home to a family whose members are also suffering from food shortages? How can anyone be sure that the therapeutic food goes to the malnourished child? "It's a hard situation," says Hanson. "In Borno, we assume food will be shared by the family. So we do our best to also give a ration of other food — rice, oil, beans, millet — to feed the rest of the family. It will help them from getting malnourished themselves, and it will protect the therapeutic food for the child."

Protecting that food supply for the malnourished child is especially important in Borno because the standard of checking on the child every week is not always possible. There are too many families and they are scattered far and wide. So MSF is giving families up to a month's supply of food.

In most African countries, there is a harvest season and a lean season. Depending on weather and crops, the lean season usually lasts from about May to August. But this year, it's predicted the lean season will begin as early as March, and food shortages will be even more severe. "Families had to leave their crops, or they weren't able to plant. So the harvest was poor," says Hanson. "The lean season will come earlier than usual."