Accessibility links
New Medical Worry: A Deadly Fungal Infection That Resists Treatment : Goats and Soda Candida auris first was identified in Japan in 2009 and now has been found in five continents. 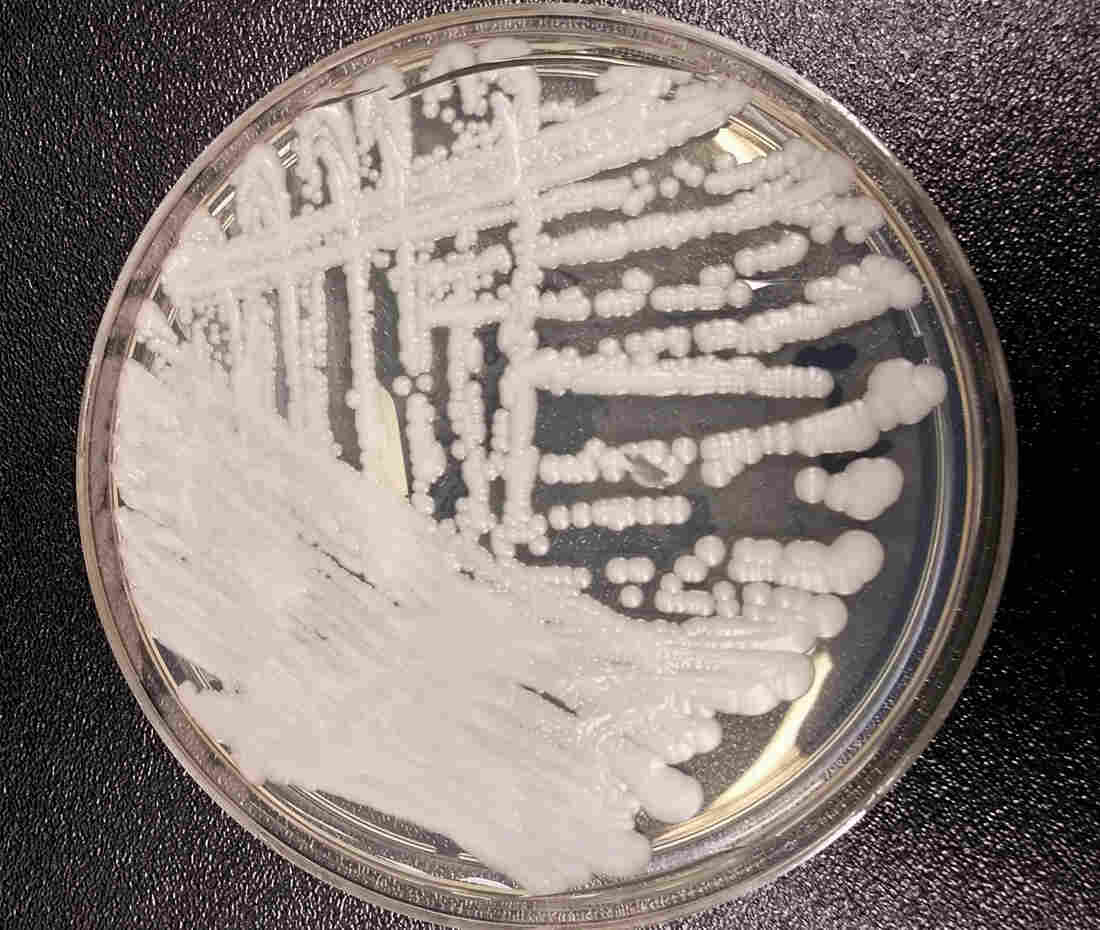 This image depicts a strain of Candida auris cultured in a petri dish at the Centers for Disease Control and Prevention. CDC hide caption 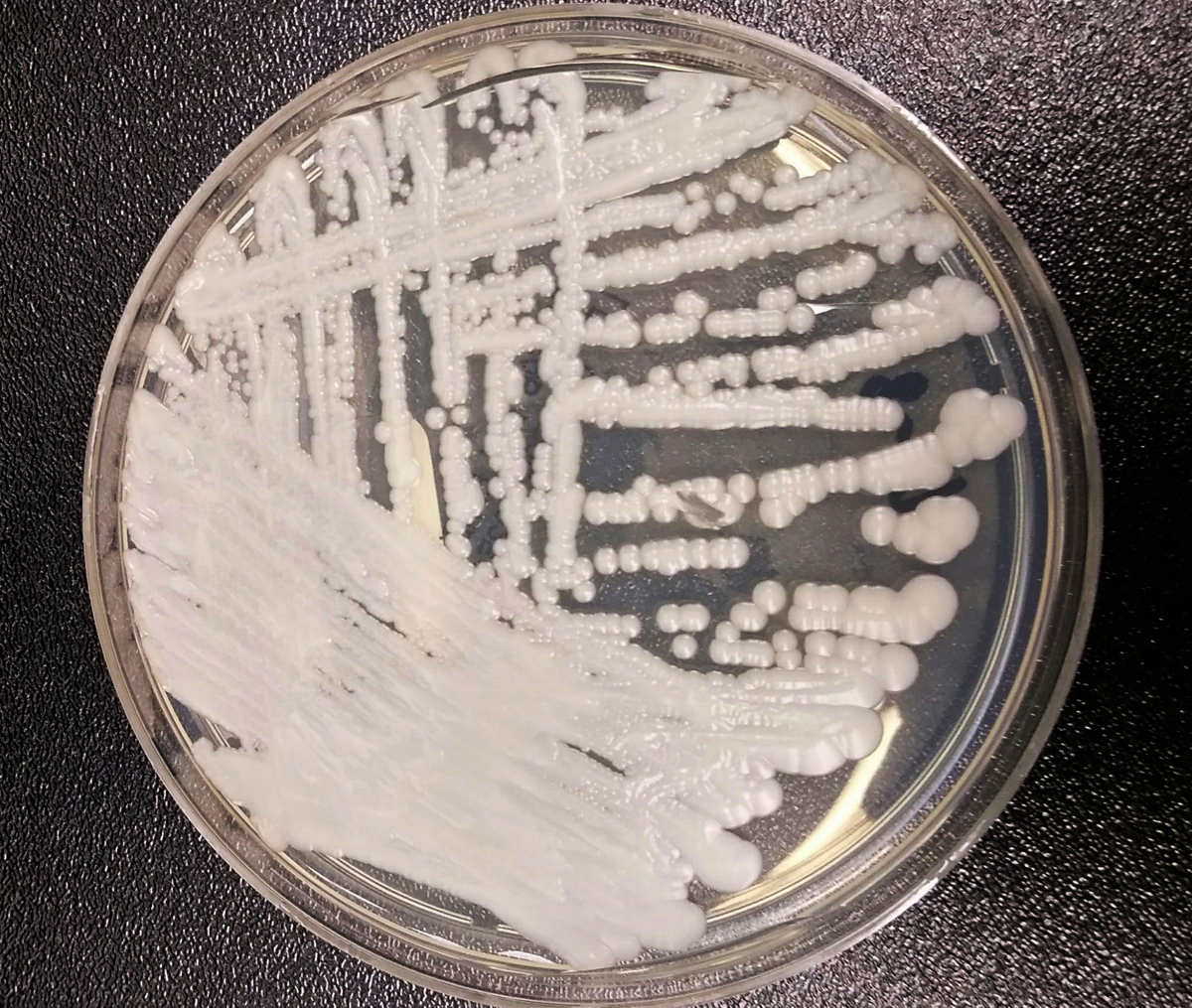 This image depicts a strain of Candida auris cultured in a petri dish at the Centers for Disease Control and Prevention.

You've probably heard of antibiotic resistance — germs that can resist the drugs designed to wipe them out.

Now there's a new kind of resistance to worry about — fungal infections that are resistant to treatment.

The fungal infection in question is Candida auris, which can cause infections in the mouth, genitals, ears, wounds or, worst of all, the bloodstream. While other species of Candida can lead to the same kinds of infections, Candida auris is getting worldwide attention because, according to a study in the February 2017 journal Emerging Infectious Diseases, some cases have proved to be resistant to all three classes of drugs available to treat fungal infections. The first reported case was in Japan in 2009 but it has now been found on five continents.

The problem with antibiotic resistance is well-known and widespread. But resistance to all available antifungal drugs "is something we haven't seen previously," says Dr. Cornelius J. Clancy, chief of infectious diseases at the VA Pittsburgh Health Care System.

All species of Candida can trigger a potentially life-threatening infection, says Dr. Riina Rautemaa-Richardson, researcher at Wythenshawe Hospital in Manchester, England, and an author of the study. The danger occurs when the fungal infection enters the bloodstream, leading to sepsis — the body's overwhelming response to an infection, which can slow blood flow, damage organs and sometimes cause death. It appears that C. auris puts people at greater risk of sepsis than other species of Candida, says Richardson.

The microscopic spores produced by fungi are present in the air and soil, so most infections begin on the skin or in the lungs. They're largely harmless, but they can be dangerous for people with weakened immune systems, like cancer or AIDS patients. The infection can spread in health care settings if beds and medical equipment have been contaminated, though it rarely spreads directly from patient to patient.

No one knows whether C. auris has spread by traveling with patients or on object surfaces, on planes, for example — or developed simultaneously in various parts of the world. Because microbes can react to changes in the environment, says Richardson, it's possible that other species of the Candida bug, stressed perhaps by exposure to radiation or antibiotics or disinfectants, changed their form and became C. auris.

"It appears they might have emerged independently in different places," says Clancy, author of an editorial, "Emergence of Candida auris: an International Call to Arms," in the Jan. 15 journal Clinical Infectious Diseases.

So far, there have been relatively few cases of C. auris around the world, 24 of them reported in the States. Richardson said the death rate after infection approaches 60 to 70 percent, though the patients also had other serious medical problems, like cancer, so may have died of their underlying disease.

Some of the patients were treated successfully with antifungal medications. But a study of 54 samples of C. auris from patients found that 50 of the samples, in lab tests, did not respond to fluconazole, an oral medication that is the first-line treatment for other species of Candida and the most commonly used antifungal drug.

The new bug has other traits that make it hard to stop. Most bugs dry up and die without moisture, so they'll die if a hospital room is cleaned and left empty for a day or two. C. auris can survive a day or more of dryness "and when it wakes up with moisture, it's still normal," Richardson says.

And traditional cleanup strategies like wiping surfaces with conventional disinfectants failed to clear hospital rooms and equipment of the fungal infection. In the United Kingdom, one disinfectant, a form of bleach, was found to work.

"You have to wash and scrub, and not just put alcohol gel on equipment," Richardson says.

The CDC urges hospitals to contact state public health authorities if they suspect cases of C. auris and to initiate infection control techniques such as patient isolation. That's possible in developed nations, but most poor countries lack the DNA sequencing equipment to even diagnose C. auris, says Clancy.

This new species of fungal infection has the potential to become a serious public health challenge — a threat similar to that of antibiotic resistance.
"There's no reason for panic," Richardson says — but there is reason to give full respect to this potential threat.