Accessibility links
Oscar Nom Goes To 'The White Helmets," Documentary With Footage From Young Syrian Rescue Worker : Goats and Soda He began posting videos of rescue missions on YouTube — and ended up working as a videographer for the Oscar-nominated 'The White Helmets.'

"I never thought I can make a film for Oscar!" says Khaleed Khateeb.

Khateeb is a volunteer for the Syria Civil Defense forces, rescuing those caught in the crossfire of the civil war. He began filming scenes of the rescue missions and posting them on YouTube.

When filmmaker Orlando von Einsiedel decided to make a documentary about the group, he got in touch with Khateeb, gave him training and better camera equipment and told him to keep on filming.

Today, it was announced that the 41-minute Netflix film, which features Khateeb's footage, has been nominated for an Oscar in the short documentary category.

"I feel we let all the people around the world ... know what is going on in Syria," he told us after hearing of the nomination.

We spoke to Khateeb last September about his work on the film and we interviewed von Einsiedel as well. That story is below. 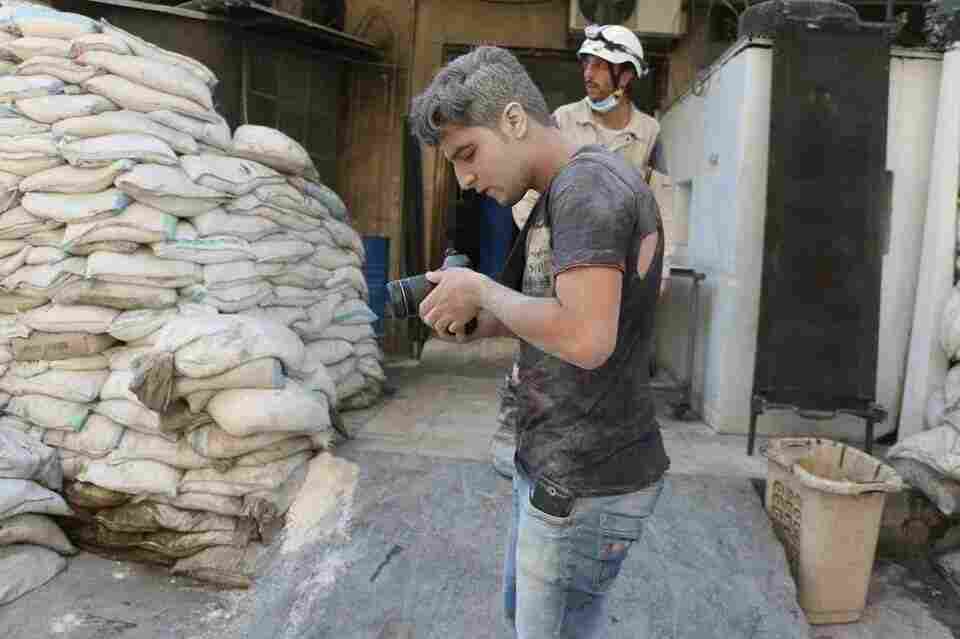 Khaleed Khateeb, 21, was the videographer for the Netflix documentary The White Helmets. "This photo was after double tap of aircraft on July 27, 2014," he says, referring to an airstrike followed by another attack. "I don't know how I survived." Fadi al Halabi/Courtesy of Khaleed Khateeb hide caption 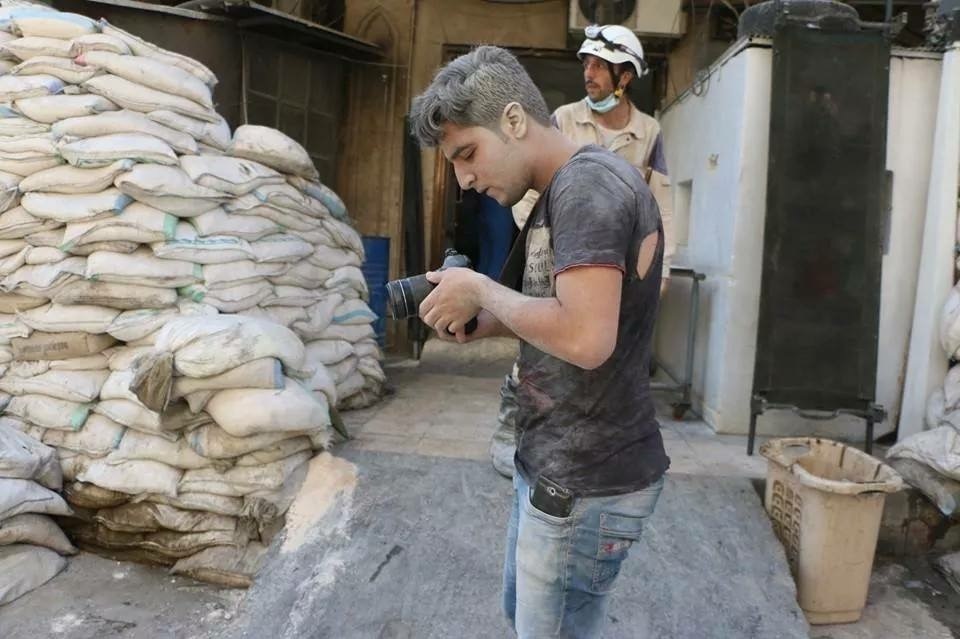 Khaleed Khateeb, 21, was the videographer for the Netflix documentary The White Helmets. "This photo was after double tap of aircraft on July 27, 2014," he says, referring to an airstrike followed by another attack. "I don't know how I survived."

Khaleed Khateeb dreamed of being a photojournalist when he was in high school. As he watched Syria crumble into chaos around him, he wanted to share his country's story with the world.

"And now," he says, "I have finally got my dream." Khateeb is a 21-year-old volunteer for the Syria Civil Defense forces, rescuing those caught in the crossfire of the civil war.

And over the past year, he has had a second job: filming his fellow volunteers' heroic efforts for the Netflix documentary The White Helmets, a 41-minute film released this month.

Khateeb worked with U.K.-based filmmaker Orlando von Einsiedel, director of the Oscar-nominated 2014 film Virunga, about the gorillas who live in that Congolese national park.

Von Einsiedel says he first found out about the Civil Defense forces — informally known as the White Helmets — when "some friends showed me and [producer Joanna Natasegara] this grainy YouTube footage of this tiny baby being pulled out from the rubble after a bombing."

"We were even more moved when we found out who the rescuers were," von Einsiedel says — regular citizens. They're former blacksmiths and accountants, gym teachers and students — like Khateeb.

In the five years since the civil war between President Bashar Assad's government and rebel groups began, more than 250,000 Syrians have died in the conflict. But thanks to the White Helmets, over 60,000 lives have been saved.

The story, von Einsiedel says, was "one that reignited my faith in humanity."

So von Einsiedel reached out to the nonprofit Mayday Rescue, which provides the White Helmets with equipment and guidance, to ask if he could join a group of volunteers in Turkey. They had come up from Aleppo for a boot camp in search-and-rescue techniques.

The director wasn't sure how to get footage from Syria's front lines. "The risks to journalists in Syria at the moment are so high that for us to go there would have been frankly just reckless," von Einsiedel says. 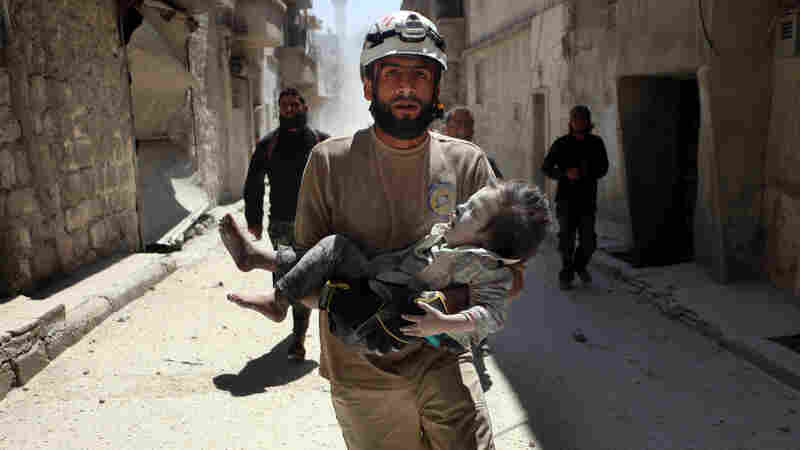 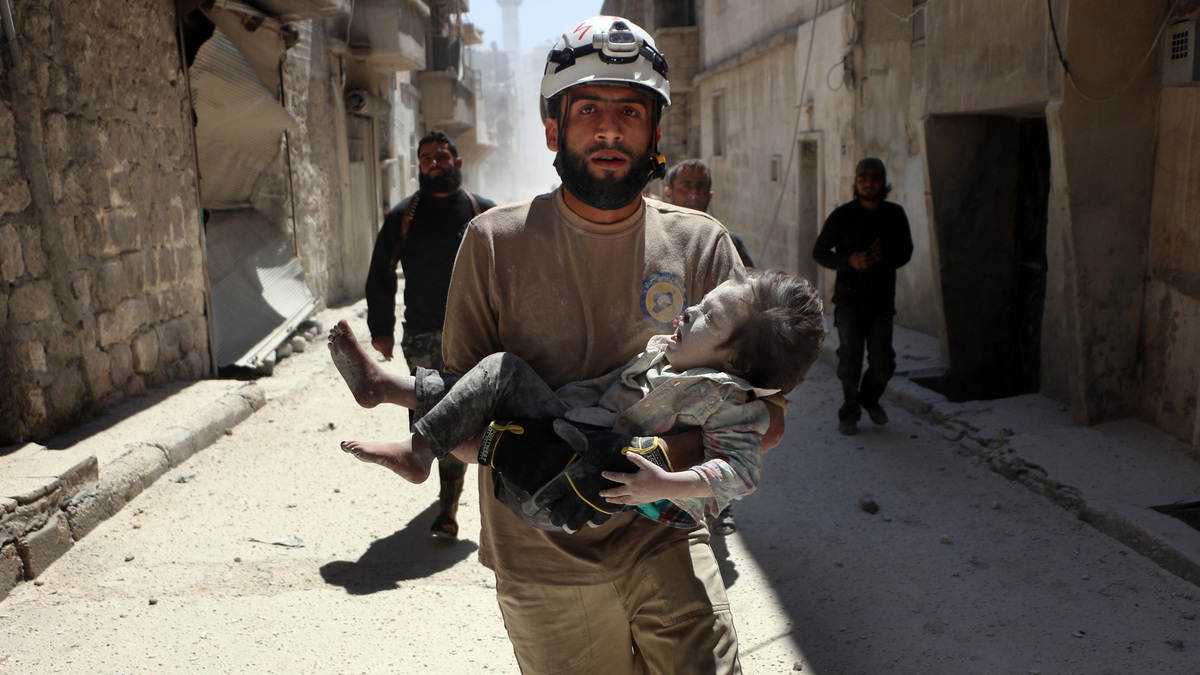 A White Helmets volunteer in Aleppo carries an injured child after an airstrike.

That's when the filmmakers found out about Khateeb, who had been informally filming rescue missions and posting them on YouTube since he joined the White Helmets back in 2013.

"When the Assad regime lost many areas inside Syria, I saw many photographers and reporters come in Syria, doing very important work, documenting," Khateeb says. "And I thought I wanted to be just like them."

Von Einsiedel asked Khateeb to come meet him and the rest of the film crew at the training in Turkey and commissioned him to be a videographer. "We helped hone his documentary filming skills," von Einsiedel says. Khateeb went back to Aleppo with better camera equipment.

Khateeb's footage offers a look into daily life for the White Helmets as they rush toward bomb blasts and dig through rubble, searching for life among a mess of dismembered bodies.

Khateeb himself has experienced considerable loss while working with the White Helmets.

"The most difficult thing for us is losing another volunteer," he says. "In 2014, we lost three volunteers in one day. We were going to a rescue operation. When we arrived to the massacre, the aircraft targeted the same place again."

Medical workers — as well as first responders, including the White Helmets — are especially at risk of being targeted by Assad's military, according to international aid groups. Over 130 White Helmets have died on duty since the group started in 2013.

Khateeb says he plans to stay in Aleppo as the White Helmets' official chronicler, even though he understands the grave risks.

He'd rather that his parents, who fled to Turkey, not know just how dangerous his job is. Recently, he texted them a nice picture of the swimming pool at the White Helmets headquarters.

"I told them, you know, 'I'm bored and I'm just swimming,' " he says. "I sent them this because I want them to forget the bad images of Aleppo."

And yet, he says, it's important that the rest of the world see those images. "So maybe they will exercise pressure on their government to intervene," he says. "Maybe then we can stop this genocide."