Accessibility links
What Oxfam's Stat About The 8 Richest Men Doesn't Tell Us About Inequality : Goats and Soda It's a shocking statistic about global inequality that's made worldwide headlines. But some economists don't think it tells the whole story. 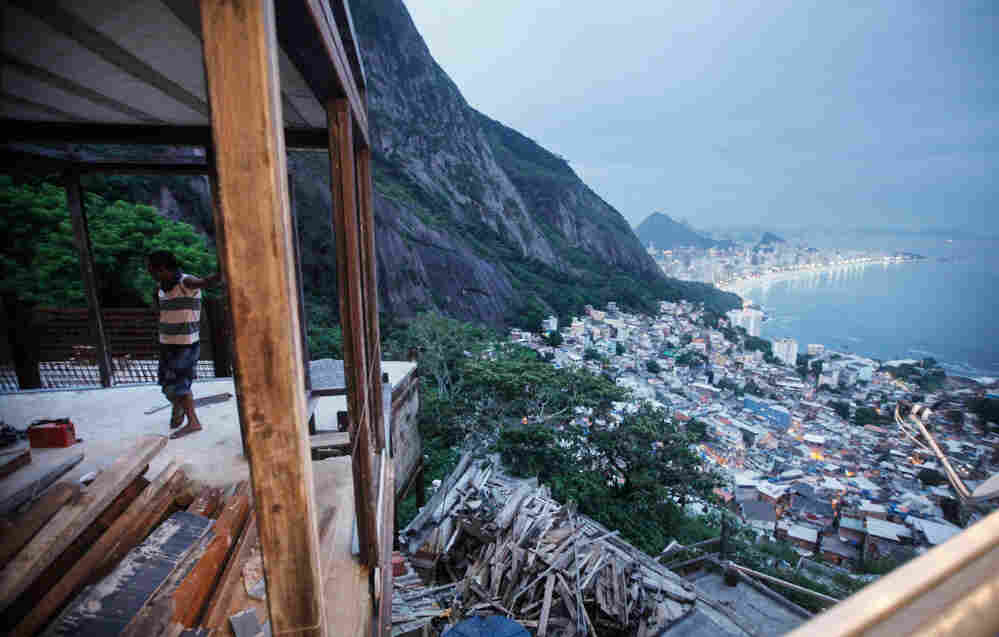 A worker stands in a construction project in a favela, or shantytown, in Rio de Janeiro, Brazil. The government has helped drive down income inequality by investing in basic services like health care, education and pensions. Mario Tama/Getty Images hide caption 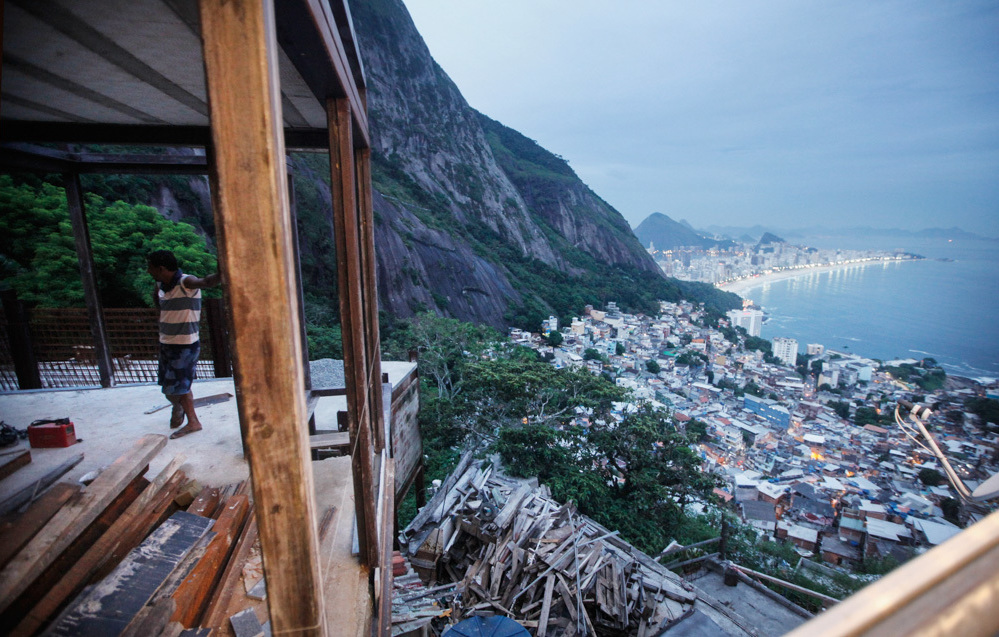 A worker stands in a construction project in a favela, or shantytown, in Rio de Janeiro, Brazil. The government has helped drive down income inequality by investing in basic services like health care, education and pensions.

It's a shocking statistic that caught the world's attention last week: Just eight men own the same wealth as 3.6 billion people living in poverty — that's half the population of the planet.

It comes from a new report by Oxfam, using 2016 data from Credit Suisse's Global Wealth Databook and the Forbes billionaires list. While the stat dramatically shows the "sheer magnitude of the gaps between the rich and poor," says economist Francisco Ferreira of the World Bank, it doesn't tell the whole story.

It doesn't, for example, "tell us whether inequality has changed over time," he says. Or "include other dimensions of well-being" like health or education, says Diana Alarcon, chief of the development and policy unit of the U.N. Department of Economic and Social Affairs.

There are other ways to examine global inequality, they say. Here are three sets of data from Ferreira and Alarcon that put Oxfam's figure into context.

Income inequality has declined over the past 25 years

Oxfam's stat shows what people own, not what they earn, says Ferreira. If you look at the income levels around the world, you'll find that inequality in global incomes has steadily declined over the past 25 years. 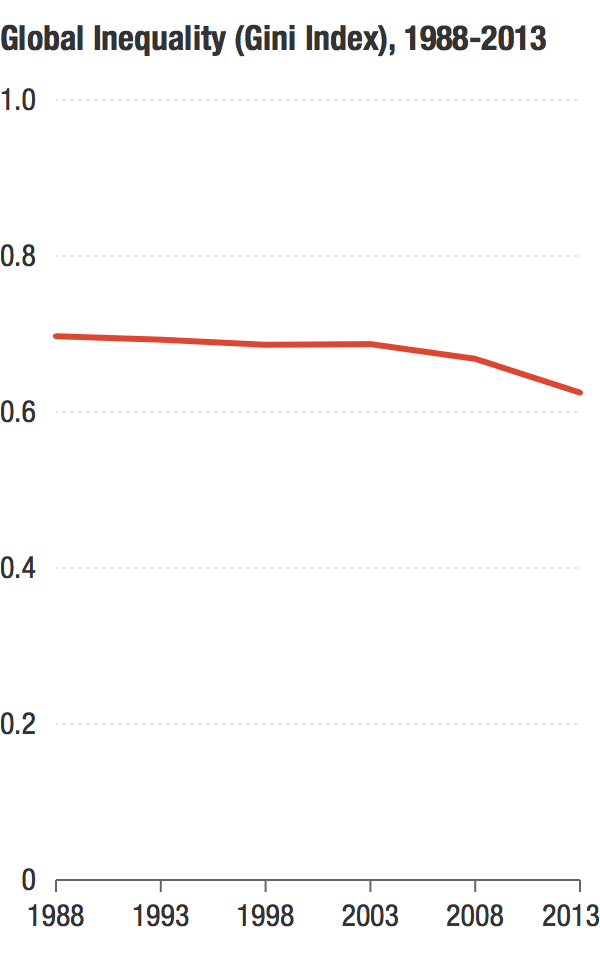 To measure income inequality in a population, the World Bank uses something called the "Gini index" (named after Italian statistician Corrado Gini, who developed the formula). A Gini score of zero in a country or region means that everyone has the same income — for example, workers in a utopian commune. A score of 100 means all the income in let's say, a kingdom, is earned by a single person, like the king. The Gini index for most countries hovers around 30 to 50. The most unequal countries in term of income distribution, according to the Bank, have Ginis above 60. (Note: In the chart, the figures are expressed in decimals).

The Bank's global Gini index reveals a downward trend when it comes to income inequality. In 1988, the Gini index worldwide was 70. In 2013, that number was 62.5.

Researchers credit the overall decline to a few things. Globalization has helped create new jobs and boost income for people in many parts of the world. Government investments in basic services like health care, education and pensions, as in the case of Brazil, have improved people's chances of success in life. And progressive tax programs on corporations and the wealthy have narrowed the gap between the rich and poor in countries like Chile and Mexico.

Still, economists aren't totally optimistic. "It's clear that the levels of inequality are deeply disturbing," says Ferreira. "But recent progress shows that it's possible for countries to reduce inequality if they choose to."

Asia has benefited the most

While globalization and other factors have helped reduce income inequality over the past couple of decades, it's only "created a lot of wealth and richness and income" in a few parts of the world — namely, Asia, says Alarcon.

Rapid economic growth in China and India have helped boost incomes in the region. According to a 2015 report on inequality by UNDESA, a person living in Asia could only expect to earn 14 percent of the average citizen's income in a developed country. In 2014, that number nearly doubled to 25 percent (although that's still just a quarter of the average income in a developed country).

If you remove Asia from the equation, you'll see a very different story in the rest of the developing world. You'll find that "for the average Joe, they haven't seen much improvement to their standard of living," says Alarcon.

How much a person earns or owns is not the only indicator of well-being, says Alarcon. You also have to look at access to education, proper housing, health care and decent jobs. "In those dimensions of development, progress has been made," she says. "Although large inequalities remain."

For example, more children around the world are in school than a generation ago. According to the U.N.'s Report on the World Social Situation 2016, the ratio of children enrolled in primary school was 93 percent in 2015, up from 84 percent in 1999.

Advances in health care have helped increase chances for child survival and improved life expectancy around the world. Between 1990 and 2015, the yearly number of deaths in children under five declined from 12.7 million to 6 million. And people are living longer. In 1990, the average life expectancy was 65 years. In 2015, it bumped up to 70.

Money may not be the only thing that matters, but it sure helps. "If wealth and income distribution improved, achievement on quality of life would improve faster for a larger group of people," says Alarcon.