Accessibility links
The Extraordinary Courage Of Acid Attack Survivors : Goats and Soda The attacker is usually an ex-boyfriend. The road to recovery, physical and mental, is long and rocky. 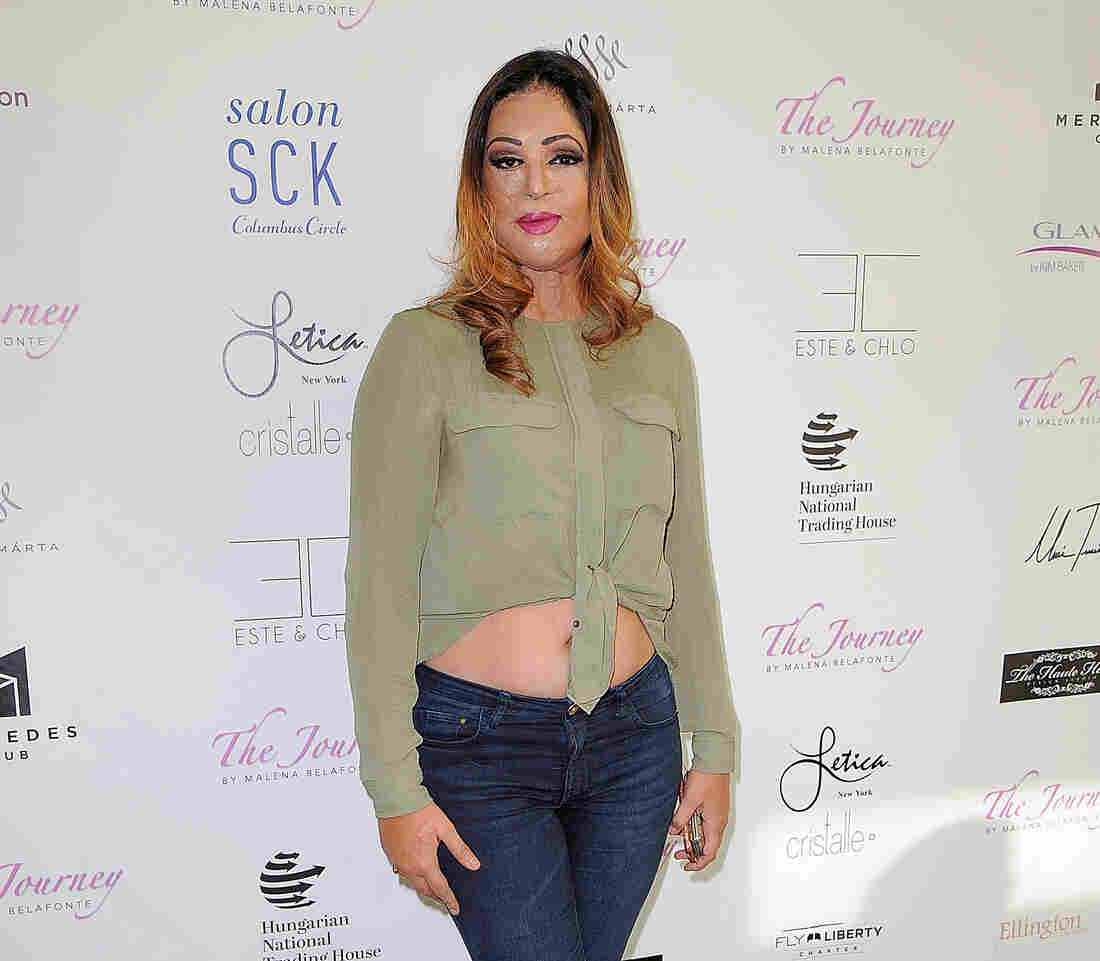 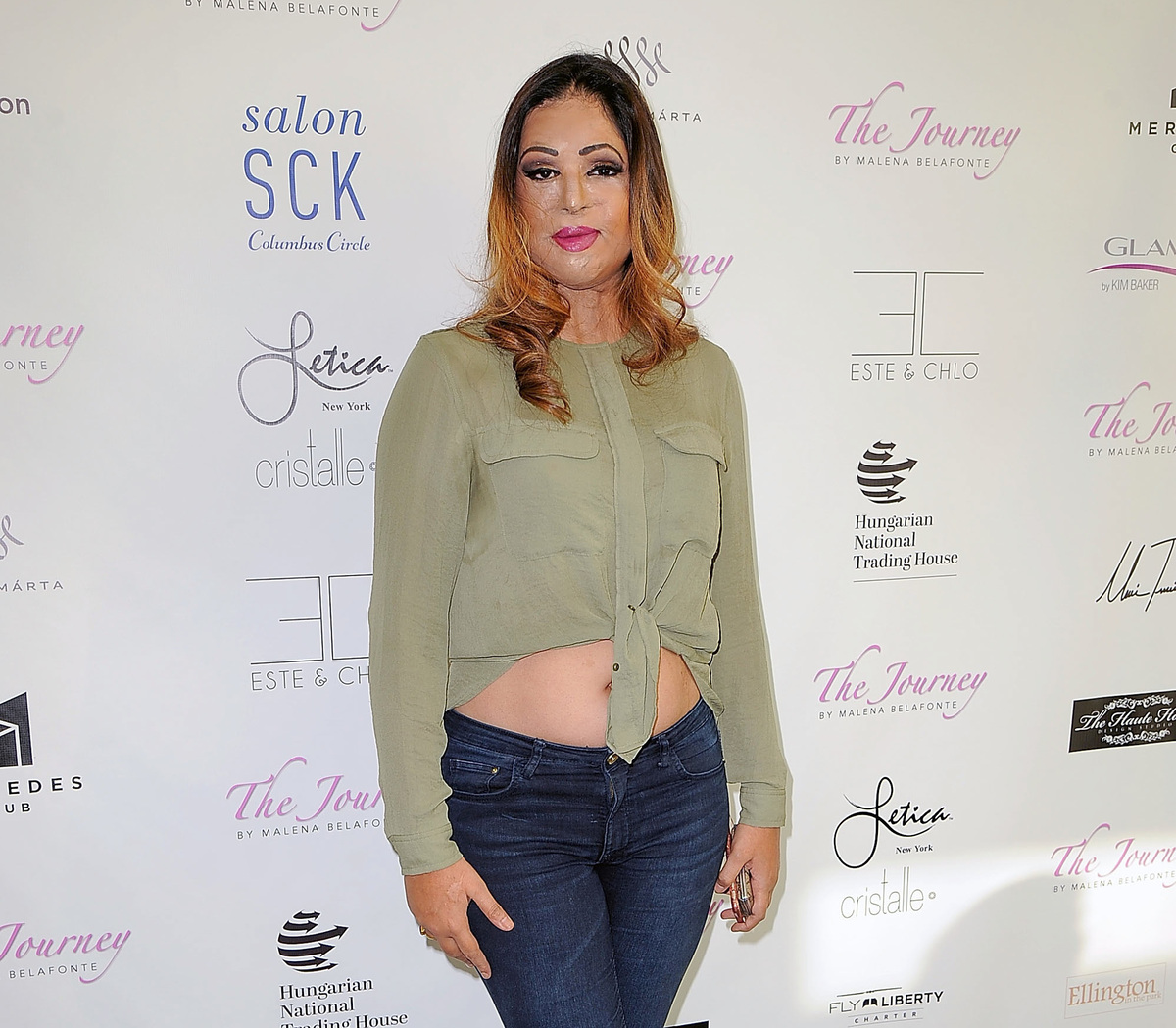 MoniCa Singh is an acid attack survivor — and a fashion designer and activist. She's pictured at New York fashion week on September 15, 2016.

When MoniCa Singh, then 19, went to visit her parents in Lucknow, India, in 2005, she had just finished her first year at the National Institute of Fashion Technology in New Delhi. She hoped to complete her degree and pursue a career in fashion design.

Then her life changed in a flash.

As she was driving down the street, a long-time acquaintance waved and motioned her to roll down her car window. Over the years, she had refused his persistent marriage proposals but his sociable gesture seemed to signal that was in the past. So why not?

Suddenly, two bicyclists carrying a bucket pulled up beside her and spilled its contents over her face, hands, legs and body. The burning sensation was, she remembers, excruciating. Was it hot coffee, she wondered before passing out. When she awoke in a hospital trauma unit, she learned it had been sulfuric acid — the highly corrosive and potentially fatal chemical that has become a weapon used by spurned men to disfigure and injure the women who have said no to them.

The two bicyclists were convicted; the acquaintance was not.

Singh's traumatizing experience was not a singular event. Approximately 1,000 acid attacks are reported yearly in India, according to the Acid Survivors Trust (ASTI), with more no doubt unreported due to fear of reprisals and the unlikelihood of successful prosecution. Acid violence occurs worldwide, the organization notes, but with greatest frequency in India, Afghanistan, Bangladesh, Colombia, Pakistan, Nepal and Uganda.

For these victims, the road to recovery, physical and mental, is long and rocky. Victims can suffer extensive facial and body disfigurement, lose their sight and experience severe depression and anxiety, fearing others will shun their scarred appearance.

Yet acid attacks survivors are finding the courage to reclaim their lives — and seeking to raise public awareness and help stop future attacks. Their strategies include taking to the fashion runway, sharing their experiences in comic books and appearing in video resumes that show potential employers they are far more than their scars.

After more than a decade and nearly 50 reconstructive surgeries, Singh has managed to forge a new path — actually, several paths, as a professional in fashion design, as an advocate who raises awareness of gender-based violence and reaches out to survivors — and this fall, as a comic book heroine.

Priya's Mirror tells the story of four real-life acid attack victims — one of them Singh — in a fictional context. After being attacked, they're imprisoned in a castle by a villain. The superheroine Priya rescues them by using a secret weapon, the Mirror of Love. Designed as a 3-D comic book with interactive videos and animation viewable with a smartphone app, the comic book was funded by the World Bank. The Mahendra Singh Foundation, the anti-gender violence nonprofit that MoniCa Singh leads, was a co-producer.

Acid attack survivors have also, in the past months, become fashion models as well as role models, walking the runways in New York and London. At New York's Fashion Week, FTL Moda's runway show featured 19-year-old Reshma Bano Qureshi, whose path to the runway began two years ago with near tragedy.

At the age of 17, accompanied by her sister, she was en route to Allahabad in Uttar Pradesh, India to take exams. Suddenly, the two women were accosted by the sister's ex-husband and two of his friends. Her sister's hands were burned; Qureshi herself lost one eye and suffered severe facial scars. She thought of suicide.

Then she met Ria Sharma. After coming across photos of acid attack survivor while she was completing her degree at the University of Leeds, Sharma was inspired to found Make Love, Not Scars, the India-based nonprofit that assists acid attack survivors. She began visiting Quershi and helped crowd-source funds for surgery.

She also asked Qureshi to participate in a public service ad campaign for #EndAcidSale, produced by the firm of Ogilvy and Mather. An online video features Qureshi giving a seemingly ordinary make-up and beauty tutorial. Until, that is, she compares the two minutes needed to put on blush to the mere three seconds in which a face can be scarred forever.

The video, released in mid-2016, was aimed at gaining visibility for acid attack victims — and getting signatures for a petition for the enforcement of the ban on the open sale of acid in India. The goal was 25,000 signatures; it garnered 300,000. The success of that video led to the invitation for Quershi to participate in the New York fashion show, where she appeared in a stylish white gown decorated with multicolored geometric panels.

Ilaria Niccolini, president of the fashion company FTL Moda, welcomes models like Qureshi and others who don't fit the usual fashion model. "Beauty is hidden in places that we wouldn't necessarily look," she says.

"I love making people look beautiful," intones Mamta [her last name is not given] in a calm, melodious voice as she looks into the camera. She presents herself as an experienced 27-year-old beautician looking for a job in Delhi, where she lives. But her half-closed eye and the discolored abrasions on her face and neck tell the story of a different experience, as an acid attack survivor. "I know what you're thinking," she says. "I could have just written all this down and sent it to you. But I wanted you to see my face too. So that when I'm working to make you look beautiful you don't look away. That's why I made this video CV."

And that message is reaching the public. A two-minute BuzzFeed India video featuring Mamta with the Indian stand-up comedian Tanmay Bhat has attracted over 750,000 views.