Accessibility links
Scientists May Have Solved The Mystery Of Nodding Syndrome : Goats and Soda For decades, scientists suspected that the parasite responsible for river blindness might be causing a rare form of epilepsy. Now they have evidence. 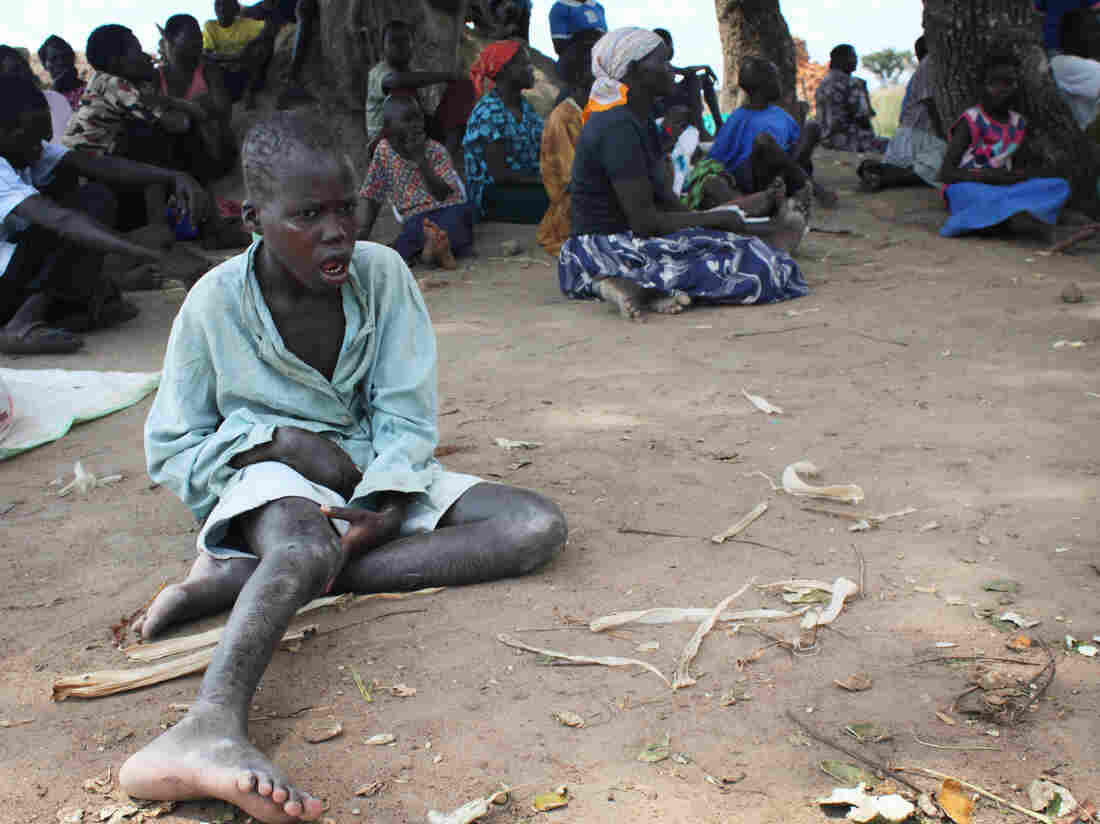 A child with nodding syndrome waits for treatment at an outreach site in Uganda's Pader district. Matthew Kielty for NPR hide caption 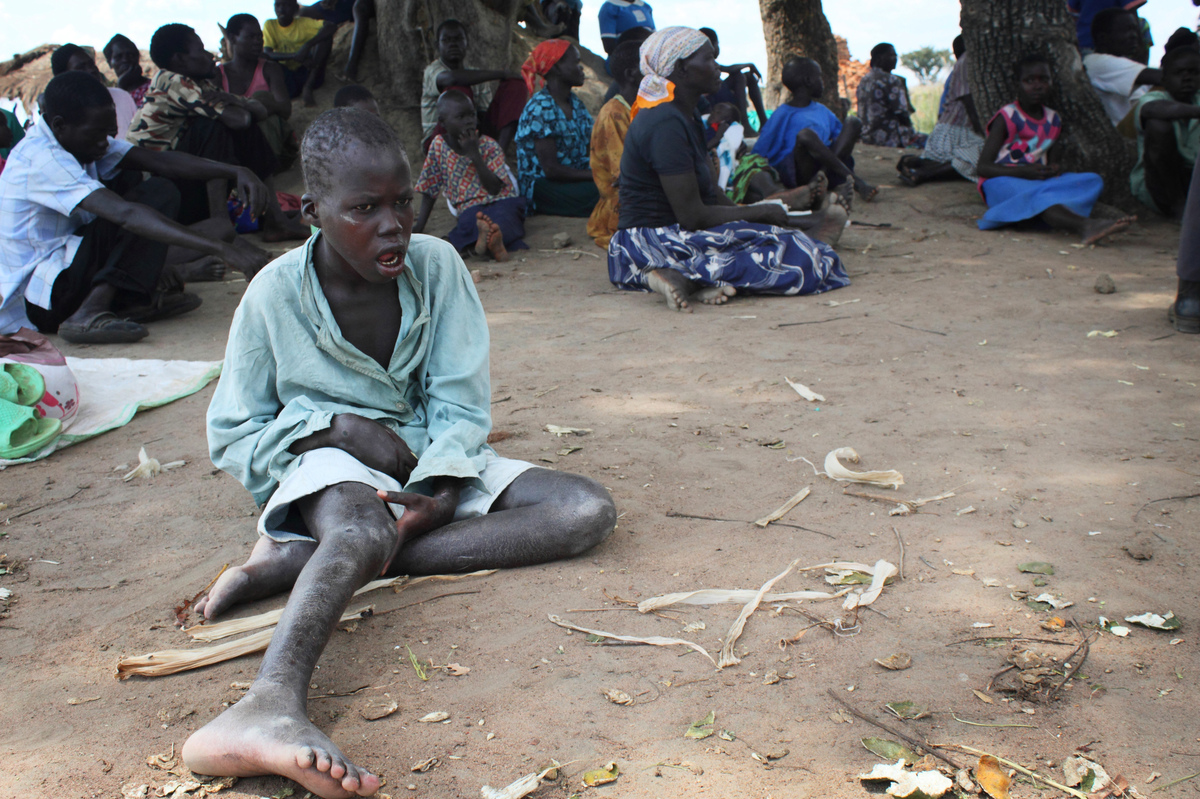 A child with nodding syndrome waits for treatment at an outreach site in Uganda's Pader district.

Scientists may have solved the mystery of nodding syndrome, a rare form of epilepsy that has disabled thousands of children in East Africa.

The syndrome seems to be caused by the immune system's response to a parasitic worm, an international team reports in the journal Science Translational Medicine. And they think it's the same worm responsible for river blindness, an eye infection that's also found in East Africa.

The finding means that current efforts to eliminate river blindness should also reduce nodding syndrome, says Avi Nath, an author of the study and chief of the section of infections of the nervous system at the National Institute of Neurological Disorders and Stroke. 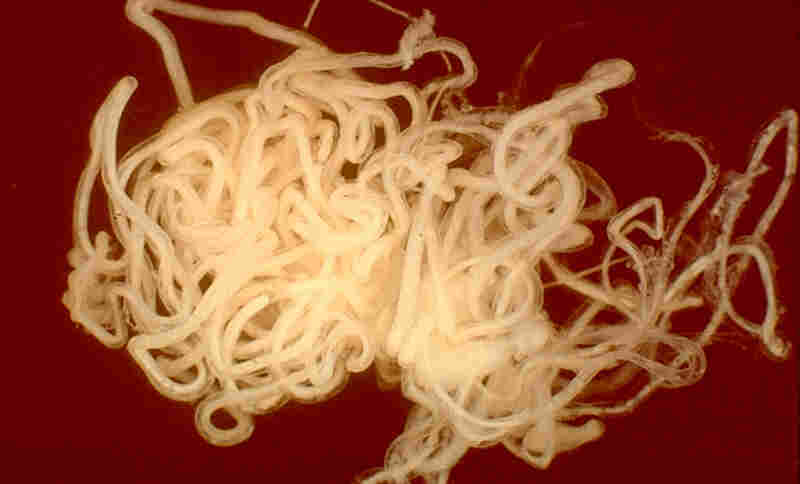 The adult form of the O. volvulus worm, which causes river blindness and may also be responsible for nodding syndrome. Courtesy of Dr. Thomas B. Nutman/NIAID/NIH hide caption 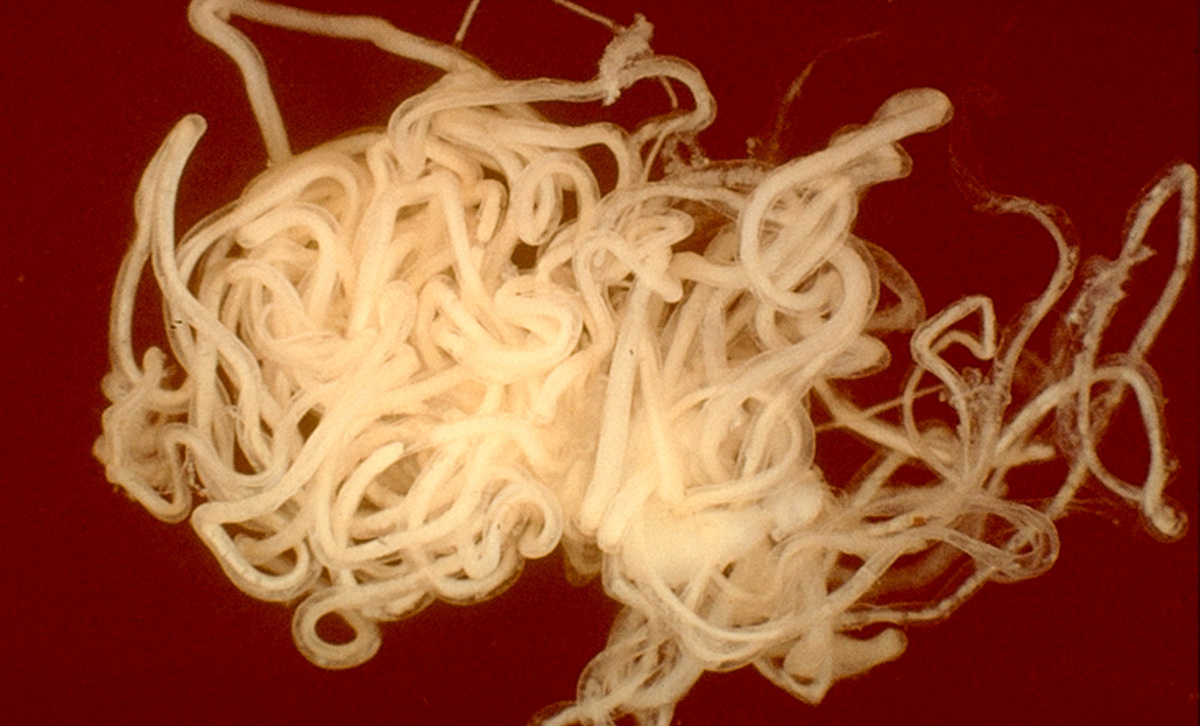 The adult form of the O. volvulus worm, which causes river blindness and may also be responsible for nodding syndrome.

Courtesy of Dr. Thomas B. Nutman/NIAID/NIH

"We can prevent new infections even if we can't treat the ones who already have nodding syndrome," Nath says. Drugs can kill the parasite in its early stages.

Nodding syndrome usually strikes children between 5 and 16 who live in rural areas of northern Uganda and South Sudan. Their bodies and brains stop growing. And they experience frequent seizures.

"These are kids, young kids, you would expect that they should be running around playing," says Nath, who visited Uganda several years ago. "Instead, if you go to these villages they are just sitting there in groups," so villagers can keep an eye on them.

The epileptic seizures weaken muscles in the head and neck. "So their heads tend to fall forward," Nath says. "And because that happens repeatedly as part of the seizure, it is termed nodding syndrome."

Researchers have struggled to find a cause for the syndrome since it was first documented in Tanzania in the 1960s. "We thought it might have to do with toxins, chemicals in the environment or nutritional deficiency," Nath says.

The Farmer And Fisherman Who Lost His Sight To River Blindness

But the only clue that seemed to hold up was that affected children lived in areas where river blindness was common. This clue was puzzling, though, because even though nodding syndrome is a brain disease, the parasite that causes river blindness doesn't seem to infect the brain.

After returning from Uganda, Nath decided to search for an explanation.

"He pulled all of the lab together as a team and asked us to each investigate different components" of the syndrome, says Tory Johnson, an assistant professor of neurology at Johns Hopkins who was working for Nath at the time. She is also an author of the new study.

Johnson's assignment was to see whether the body's own immune system might play a role. So she began screening blood samples from people with nodding syndrome.

Other scientists had also looked for an immune response. But Johnson's search was much more extensive. "We looked at everything that was available," she says.

And eventually, she found something.

Nath remembers being in a meeting one day when Johnson appeared suddenly. "I saw her waving at me and I'm like, 'Okay, what happened?'" he says.

Johnson had discovered that in people with nodding syndrome, the immune system was targeting a protein found in certain muscle cells. It looked as if the body was attacking itself.

The question was whether the immune system's attack also included the brain. So Johnson started looking to see whether the targeted protein was in brain cells.

"And lo and behold she found that yes, it was not only present in the brain, there were actually large amounts of it present in neurons," Nath says. "So the story really came together very nicely."

The full story, the team's hypothesis, goes like this:

When a person is infected with the river blindness parasite, the immune system begins sending antibodies to attack the invader. These antibodies identify their enemy by looking for a specific protein in the parasite's cells.

Unfortunately, the target protein in the parasite looks a lot like a protein found in certain brain cells. So these brain cells become unintended casualties of the body's efforts to protect itself.

The discovery shows why it's important to treat children soon after they are infected with the parasite, Nath says. That might prevent an immune response that attacks the brain. And it would mean that the parasite can't be spread from person to person by black flies.

Because nodding syndrome appears to be the result of an immune response, Nath says, it may be possible to limit brain damage in some children by using drugs that tone down the immune system response.

The finding also raises the possibility that parasites, or other infections, are causing epilepsy in the U.S. and other countries, Nath says.

"We know there are a large number of immune-mediated epilepsies," Nath says. "But the underlying cause is not clear."

And there are plenty of parasitic infections in the U.S. Pinworms, for example, infect millions of children each year.

It's possible that some of these infections are leading to epilepsy, Johnson says. "We don't know because we haven't looked yet."