Accessibility links
The Next Pandemic Could Be Dripping On Your Head : Goats and Soda Bats, birds and tourists love a good cave. And so do viruses. Scientists say this mixture could trigger a deadly outbreak. 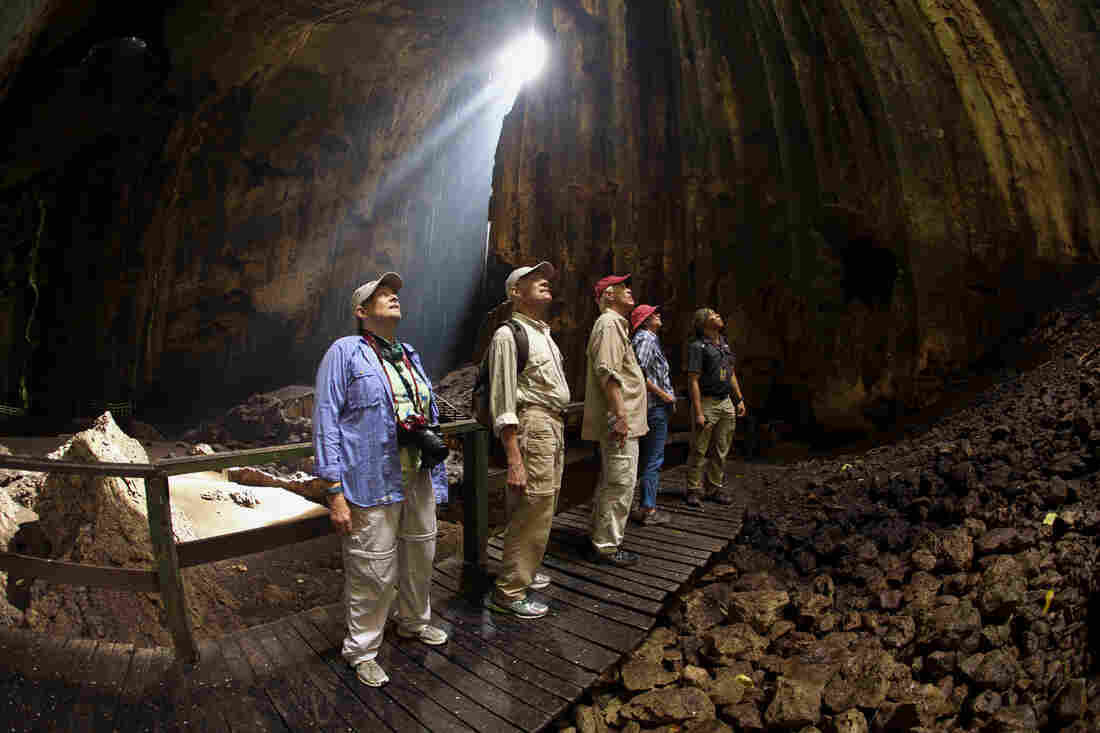 Each year thousands of people from around the world tour the Gomantong Cave in Borneo. Although scientists have found a potentially dangerous virus in bats that roost in the cave, no one has ever gotten sick from a trip here. Razis Nasri hide caption 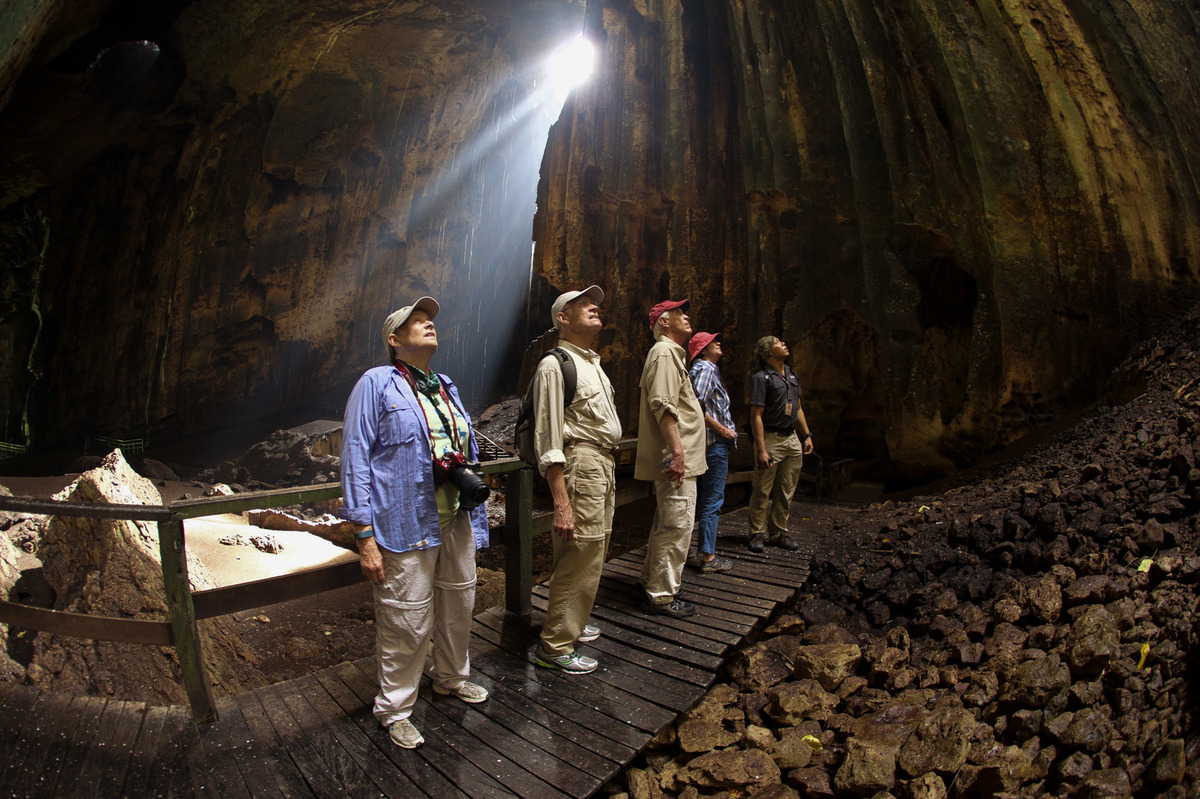 Each year thousands of people from around the world tour the Gomantong Cave in Borneo. Although scientists have found a potentially dangerous virus in bats that roost in the cave, no one has ever gotten sick from a trip here.

Welcome to the bat cave. No, we're not talking about the secret headquarters of a superhero.

This is Gomantong — an ancient cave carved out of 20 million-year-old limestone in the middle of the Borneo rain forest in Malaysia. It's part of a vast network of tunnels and caverns. And it's the perfect hideout for bats. Up at the top are millions of bats. Literally millions. They hang upside down all day long from the cave's ceiling, sleeping and pooping.

"Oh dear! We've been dripped on," says Mike Lindley-Jones, a doctor from Australia, as some liquid falls on his head. "Is this bat urine?"

"No, it's just water," says Jimmy Lee, with the U.S.-based nonprofit EcoHealth Alliance.

Lee is guiding us through the cave, along a wooden boardwalk. Suddenly Lindley-Jones grabs the handrail covered in guano.

"Don't touch your face!" Lee warns, because inside that bat excrement could be something potentially dangerous. 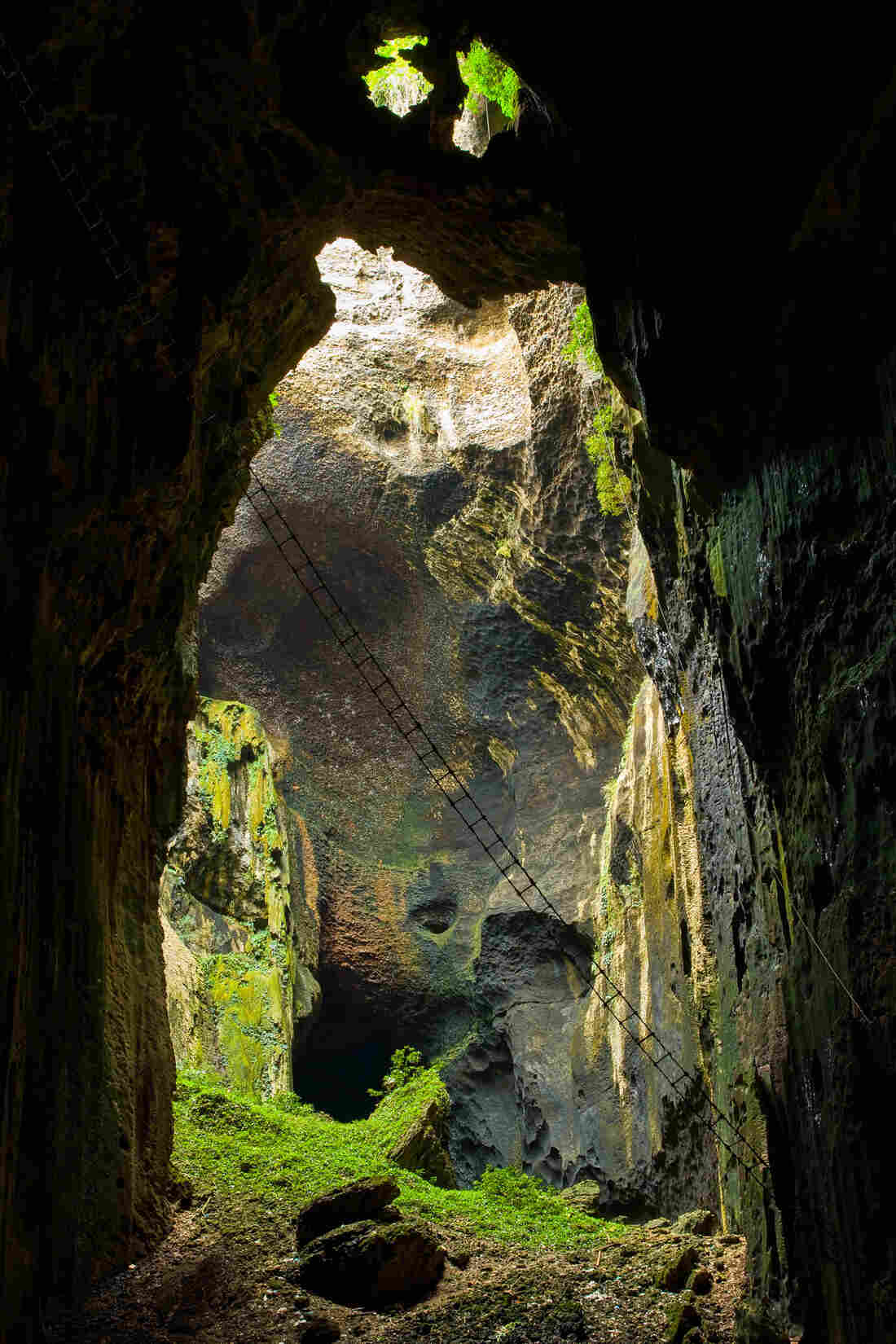 Carved out of limestone, the Gomantong Cave in Borneo looks like a 20-million-year-old cathedral. A hole in the top lets sunlight stream down 100 feet to the floor. Juan Carlos Munoz/Nature Picture Library/Getty Images hide caption

We're all wearing masks. Because bats tend to carry lots of viruses. Some of them are harmful to us. Bats are vital for keeping the rain forest alive — they are key pollinators for more than 500 kinds of plants. But as people spread out around the globe, we're increasingly coming into contact with bats — and the viruses they carry. Right here, we're using one of their favorite hideouts as a tourist attraction.

"Visiting beautiful places like this inspires people to protect tropical ecosystems and the species that live here," Olival says. "At the same time, we need to recognize that there may be potential health risks when people and wildlife come together, and that's why we're working to understand and limit those risks."

A few years ago, Olival, Lee and their colleagues went hunting for viruses around this cave, in partnership with the Sabah Wildlife Department and the Danau Girang Field Centre. And they couldn't believe what they found.

"We found 48 new viruses in the surrounding forest," Olival says, "including a virus related to SARS in bats that roost in the cave."

Olival and his colleagues don't know yet if these new viruses can infect people. They are related to viruses that do. But SARS-like viruses aren't something to mess around with.

In 2003, SARS scared the world. The deadly virus emerged in China and spread to Singapore and Hong Kong. Then hopped on a plane to Toronto and cities in the U.S. People panicked. They thought this was the big one — a pandemic that could kill millions. Luckily, health authorities stopped it in time.

Now this SARS-like virus could be above our heads. Dripping from the walls. Even circulating through the air. 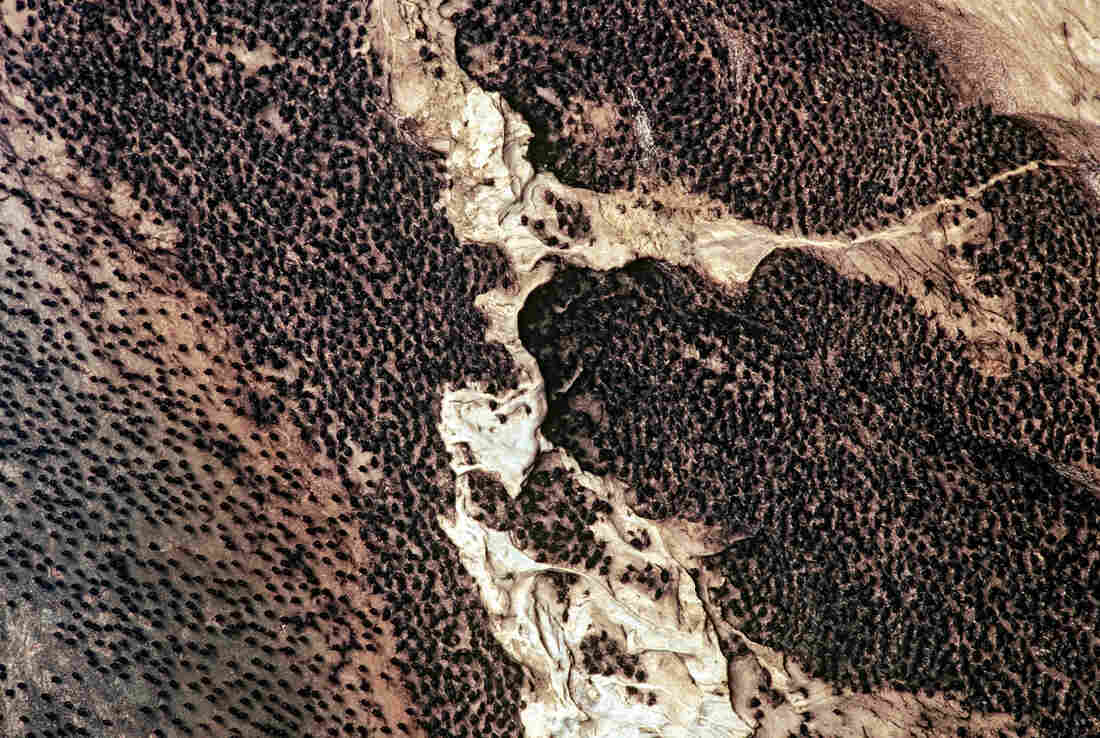 Wrinkle-lipped bats hang from the cave ceiling while swiftlet birds roost on the walls. With so many animals hanging out above visitors, there's a good chance of getting dripped on inside the cave. Auscape/Getty Images hide caption

Historically, it's been difficult for scientists to pinpoint where a deadly outbreak begins. For the recent Ebola outbreak in West Africa, the culprit was possibly a hole in a tree where toddlers liked to play and may have come into contact with infected bats. SARS very likely came from a civet cat, caged at a meat market.

Like these places, bat caves around the world have the two essential ingredients to brew up a new plague: intrusion of people into a previously hidden habitat and viruses circulating around.

In this case, the Gomantong Cave is an ecotourist hot spot. People come from all over the world to see the cave — and the orangutans and pygmy elephants in the surrounding rain forest. Tourism has helped protect this stretch of rain forest and these animals. If it weren't for tourism, there's a good chance much of this forest would've been cut down and converted into palm oil plantations. One look at this area on Google Earth, and you'll see that there is just a narrow strip of forest left. 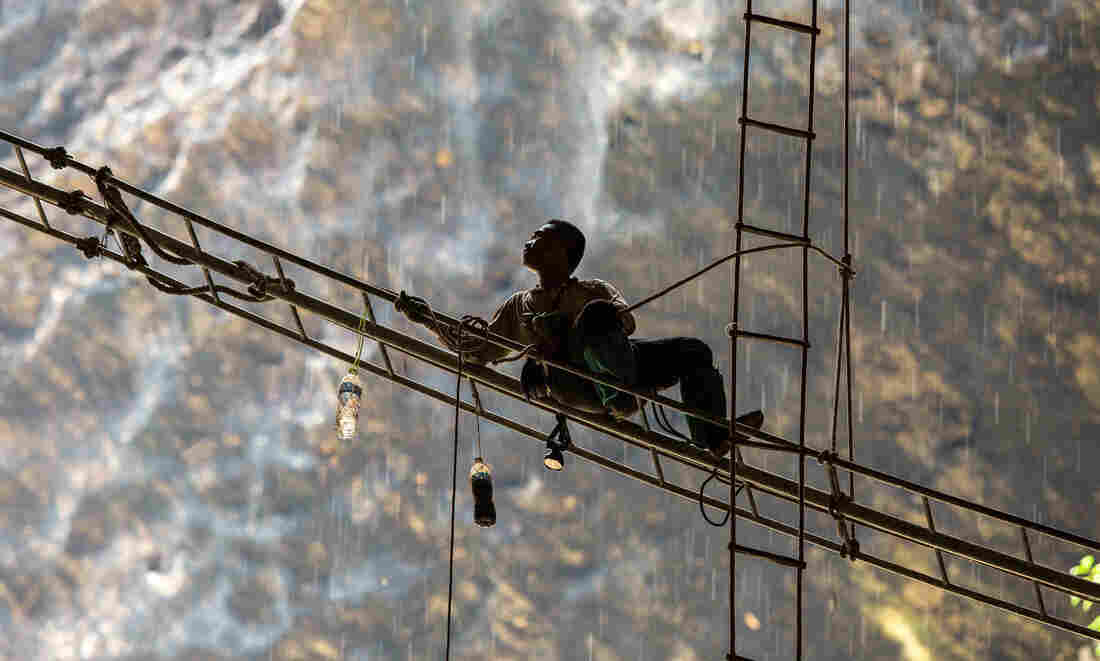 Bats aren't the only creatures in the Gomantong Cave. Swiftlet birds live on the walls. The birds' nests are a delicacy added to soup in Southeast Asia, so people living near the caves harvest the nests several times a year. Charles Ryan hide caption

The cave also provides another source of income for families that live nearby. Up high along the cave's walls, swiftlet birds zoom in and out of their nests. The nests are made from the birds' saliva and are a delicacy in Chinese cuisine. So each year, men climb on rope ladders along the walls to collect the nests and sell them.

Below the birds and their nests, another creature reigns supreme.

"That wall is plastered with cockroaches," says Sammy Whitaker, a young boy from New Zealand, touring the cave with his parents. 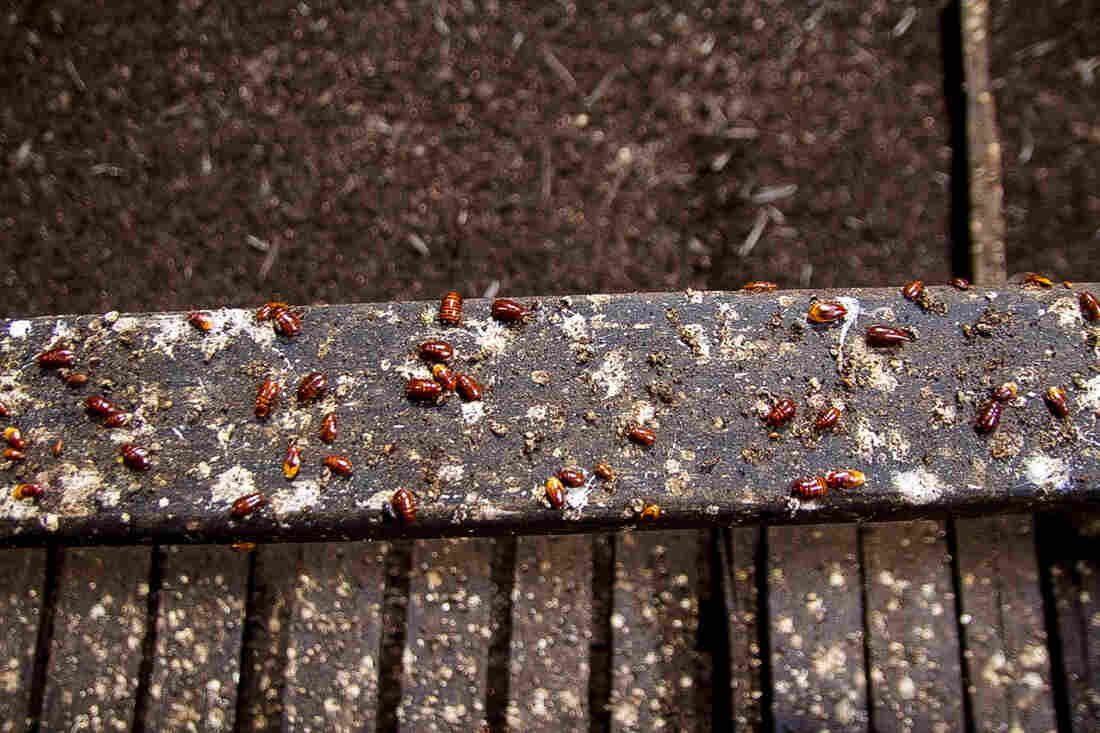 Bat guano and bird feces coat the hand railing of the walkway in the Gomantong Cave. For cockroaches, this concoction is a delicacy, but there's a tiny, tiny chance a dangerous virus lurks inside. Kevin Olival/Ecohealth Alliance hide caption

Cockroaches are everywhere in the cave. They're all over the floor. On our shoes. There are so many that we can even hear them.

But the cockroaches aren't what worries scientists about the cave. It's what the critters are eating: bat poop.

In the middle of the cave is a giant mountain of bat guano. It looks like black snow that's 8 to 10 feet deep. It smells awful, like moldy socks mixed with rotting cheese. 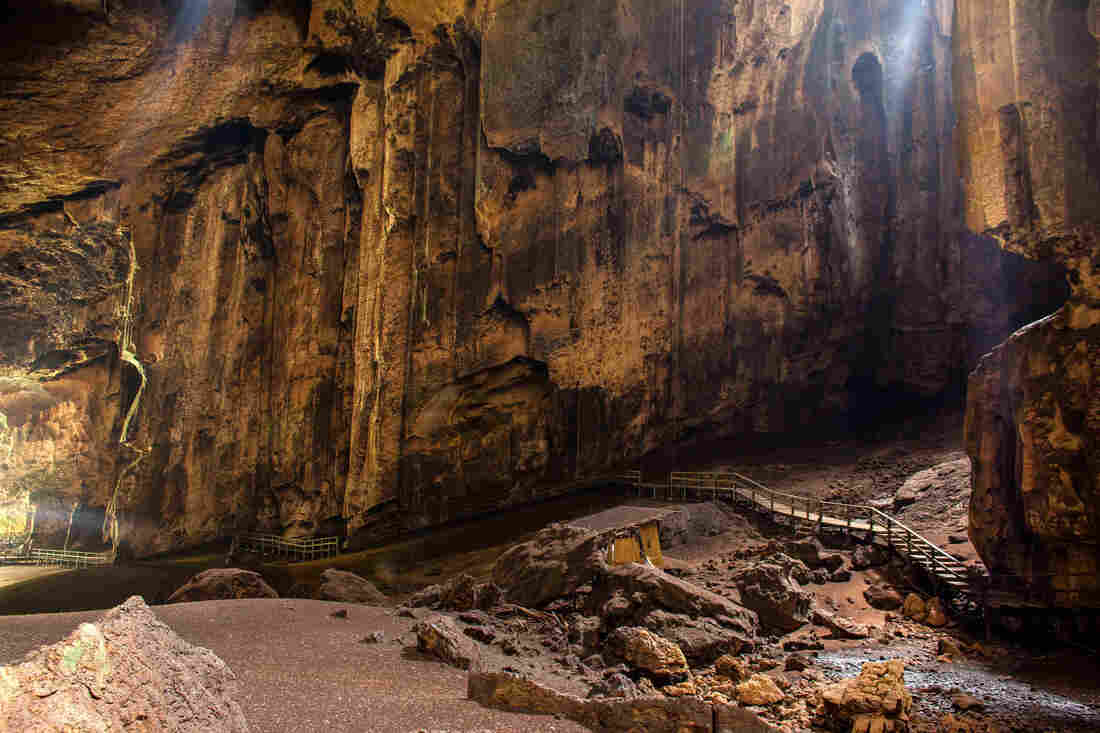 Dark, dank and secluded, the Gomantong Cave is a four-star hotel for bats. Millions of animals hang upside down from the cave's ceiling and poop on its floor. That brown pile in the foreground is a huge pile of bat guano — sometimes 8- to 10-feet deep. Charles Ryan hide caption

And some of that guano might contain this new SARS-like virus, Olival says.

But the risk any one tourist faces is low. So low, Olival says, that for a virus to infect a tourist, it would be like the virus winning the lottery. Only some bats in the cave have the virus. So only a few of the guano pellets are likely contaminated. And then, the tourist has to touch those contaminated pellets and rub his eyes or mouth to get infected. That's another long shot.

But here's thing about lotteries: There's always a winner. A big winner. Scientists worry it's the same thing with virus-filled bat caves.

"It's a numbers game," Olival says.

Because there are so many bats in caves around the world and so many people now visiting them, eventually it's going to happen in some cave at some moment.

In fact, Olival says, it already has.

In 2007, a woman from Colorado took a trip to Uganda, where she visited a bat cave, kind of like the Gomantong Cave. 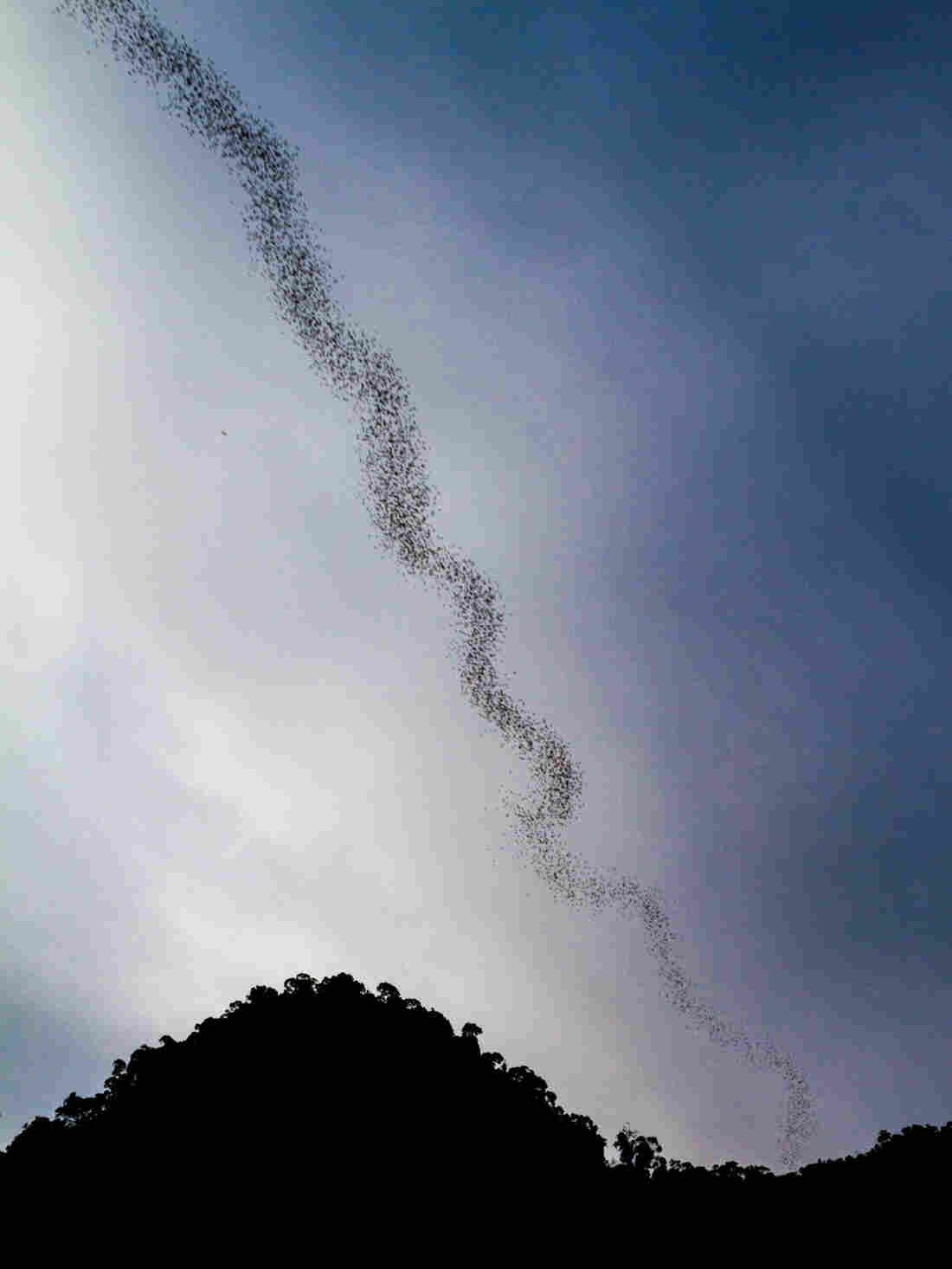 Out of the bat cave! Every night at sunset, millions of bats fly out of Gomantong Cave to hunt in the surrounding forests. By feasting on insects, the bats help keep pest populations under control in the rain forest. Paul Williams/Nature Picture Library/Getty Images hide caption

A few days after she returned home, she got very sick. Eventually the woman was diagnosed with Marburg virus — a close relative of Ebola.

She recovered. And scientists think they know how she got the virus: She put her hand on rocks covered in bat guano.

Fortunately, the woman didn't spread the disease to anyone else. But it could be just a matter of time before another tourist does.

Tourism is one of the fastest-growing economic sectors in the world. In 2015, people took more than 1.2 billion international trips as tourists. Tourism helped Zika spread around the Americas and brought SARS to North America.

Just as we're leaving this cave in Borneo, we run into two more tourists — a father-son pair from the U.S., Anthony and Joe Caravello.

They've just finished the cave tour, and Anthony notices something on his dad's hat.

"You've got a piece of guano on your hat," Anthony says. "Actually, you've got a few pieces."

"Just what I wanted," Joe says with a chuckle. "Maybe I could take it home and show it off." Because soon Joe will hop on a plane and head back home to Florida.

Like most people touring the cave, Joe wasn't told about the potential risk. Because why scare away business when the risk is infinitesimally small for any one tourist?

But eventually someone, somewhere, won't be so lucky. And the impact of that could be global.

What do you want to know about pandemics? Share your questions here. Our global health team will answer some of them in an upcoming story.