Accessibility links
South Sudan Is Now Facing Famine. Who Declares A Famine And What Does That Mean? : Goats and Soda Just as we rank hurricanes and earthquakes, officials have developed a five-phase scale to rank food crises. 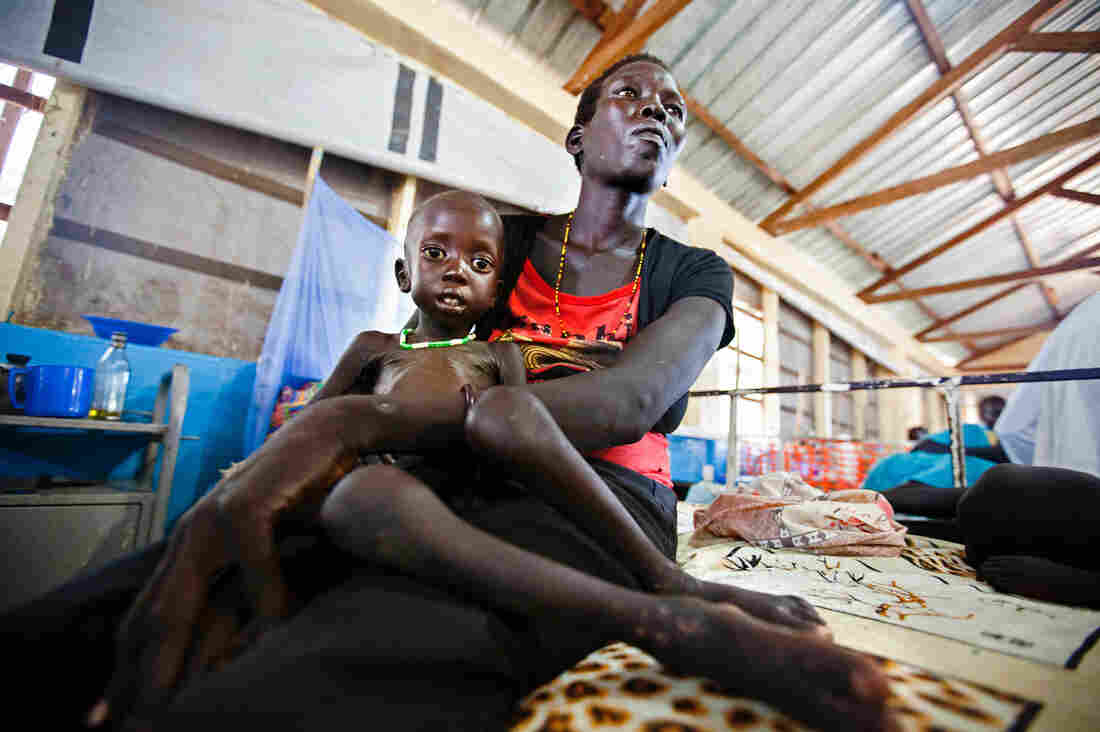 Lucia Adeng Wek holds her 3-year-old son, Wek Wol Wek, who suffers from malnutrition. They're at a clinic in South Sudan run by Doctors without Borders and were photographed on October 11, 2016. Albert Gonzalez Farran/AFP/Getty Images hide caption 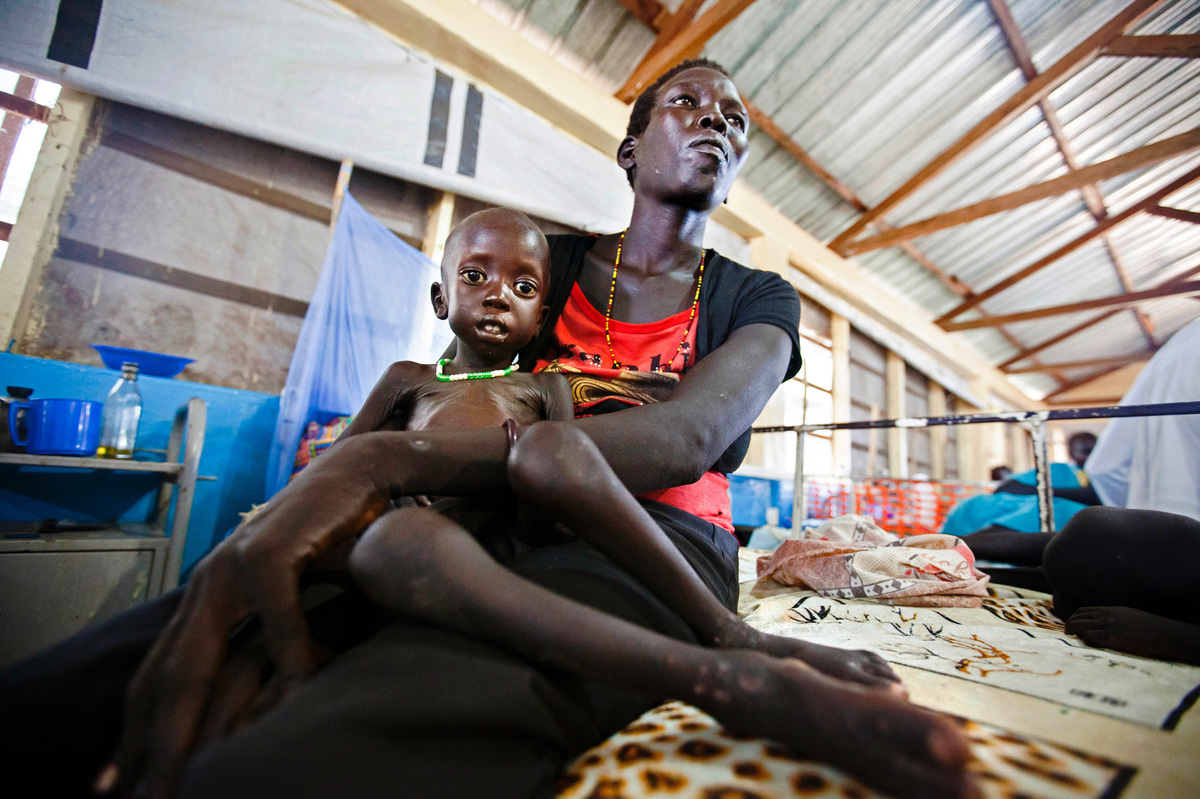 Lucia Adeng Wek holds her 3-year-old son, Wek Wol Wek, who suffers from malnutrition. They're at a clinic in South Sudan run by Doctors without Borders and were photographed on October 11, 2016.

This week United Nations officials declared that a famine in South Sudan is growing — fueled by a deadly combination of drought and conflict. They estimate that nearly 4 million people are already struggling to get enough food. And officials expect the famine will spread to more areas in the coming months affecting an additional 1 million people.

Meanwhile the threat of famine is looming over three other countries: Nigeria, Somalia and Yemen, putting a total of 1.4 million children at risk of death this year.

This week's warning follows several years of worrisome reports about droughts and food crises across Africa. And the frequency of these alerts can inure us to their seriousness. We're so used to hearing alarms about the risk of hunger that it can be hard to grasp when a situation has reached a truly catastrophic stage — as it has now.

To appreciate why the current alert is so momentous, it helps to understand who declares a famine — and what that actually means.

The determination — which was formally announced for one county in South Sudan last month and another one this month — is generally made jointly by several parties: the government of the affected country, various agencies of the United Nations and a "Famine Early Warning Systems Network" — called FEWSNET for short — that the U.S. government set up in the mid-1980s to collect and analyze data from a range of sources. FEWSNET draws from both survey data collected on the ground by aid agencies and governments as well as climate and satellite data provided by U.S. agencies like NASA and the National Oceanic and Atmospheric Administration.

The setup was developed in response to the devastating famines in East and West Africa in the 1980s — including one in Ethiopia that killed hundreds of thousands. The idea was to prevent such disasters by providing policymakers with a rating system that tells not just how severe a food crisis is but what needs to be done to keep it from escalating to the next level.

Today, officials use a five-phase scale to rank food crises that has been developed since the mid-2000s. It's not unlike the category system we use to characterize the power of a coming hurricane so that we can brace ourselves accordingly. And even at phase 1 — referred to as "minimal food insecurity" — the situation is troubling. No one is actually going without food just yet, but conditions are bad enough that as many as 1 in 5 households are only getting by thanks to aid money or because they're taking steps that could pose problems down the line. For instance, they're starting to sell off some of their cows, which could eventually make it hard for them to earn enough money to pay for food. This is the ideal point for governments and international donors to step in with aid to tide people over. Then once the crisis — say a drought or flooding – abates, people can quickly get back to normal.

But if there isn't enough help, the situation can quickly ratchet up to phase two where an area is considered "stressed" or to phase three, when it's considered in "crisis." At this point even with whatever aid is being provided at least one in five households is either taking drastic measures to get food or is actually cutting back on food. The drastic steps could involve selling off the last of their cattle, or eating seeds like maize kernels that they would normally plant for the next harvest. Also, for a situation to be considered level three, between 10 to 15 percent of the population is starting to suffer from what's called "acute malnutrition" — essentially the effects of not getting enough food.

By phase four the situation has reached the point of an "emergency." One in five households is either taking steps to get by that are so drastic they'll be impossible to sustain for much longer — or the family is already cutting back on food intake in major ways.

"People might start by protecting at least the main earners in the family — say the men who work in the fields — at the expense of the others," explains Yasmin Haque, UNICEF's deputy director of emergency operations. "So in a household that has extreme shortages of food you might see that first the mother starts to skip meals. Then it gets to the children. And then gradually you see the whole range of family members reducing their meals from three a day to two. And then maybe from a meal a day to a meal every two days."

And Haque notes that it's not just the frequency of the meals people are getting but the content of what they're eating. "In South Sudan, I've seen cases where women are boiling the bark and leaves of trees just to have something to feed their kids."

By this point as much as 30 percent of the population is also suffering from acute malnutrition. It often includes not just the moderate version but the severe form.

"People start looking skeletal," says Haque. "They have no reserves left in their body. The hair becomes bleached due to vitamin deficiency. The eyes get sunken." People find it harder to move. "Your immune system begins to suffer. Organ failure begins."

And yet this is still not a phase five "famine" situation. For that, three criteria need to be met: At least one in five households now faces an extreme lack of food, more than 30 percent of the population is suffering from acute malnutrition, and at least two people out of every 10,000 are dying each day.

That is the situation in two counties in South Sudan right now — with an estimated 80,000 people currently dealing with an extreme lack of food. And officials say that two more counties are at risk of reaching famine level soon. The problem is not just that there's a drought on but a civil war. Aid convoys and food warehouses have been attacked by both government and rebel forces.

Haque says the numbers of children suffering from the most severe form of acute malnutrition is particularly tragic. As of January UNICEF had treated 12,000 of them. And going forward officials there expect they'll be seeing as many as 25,000 additional cases each month. While treatment can keep a child from dying, Haque notes, it cannot undo the lasting damage from severe acute malnutrition. "It affects the growth of their intellect," she says. "The children are damaged for life. And the whole country is robbed of its potential."