Accessibility links
Surge In Mice Is A Harbinger For Lyme Disease : Goats and Soda Lyme disease is spreading, and this summer is shaping up as a whopper. Why has the tick-borne illness gotten so bad? The answer traces back to something the colonists did more than 200 years ago. 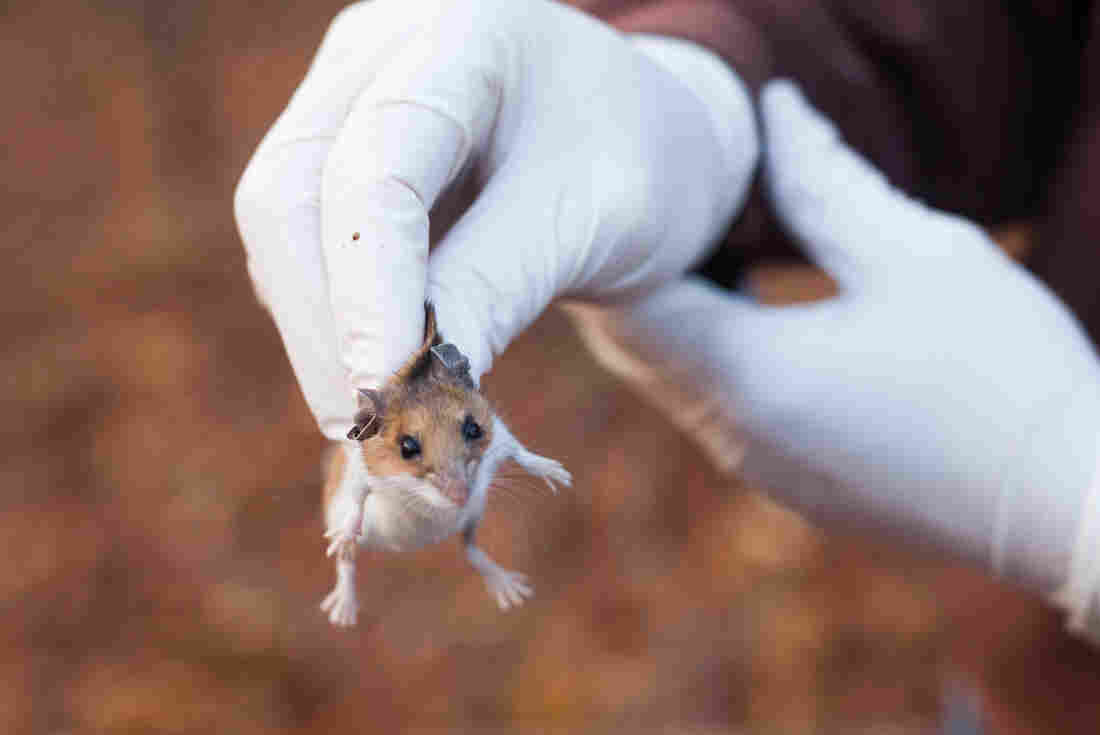 White-footed mice are efficient transmitters of Lyme disease in the Northeast. They infect up to 95 percent of the ticks that feed on them. But it's people who create the conditions for Lyme outbreaks by building homes in the animals' habitat. Stephen Reiss for NPR hide caption 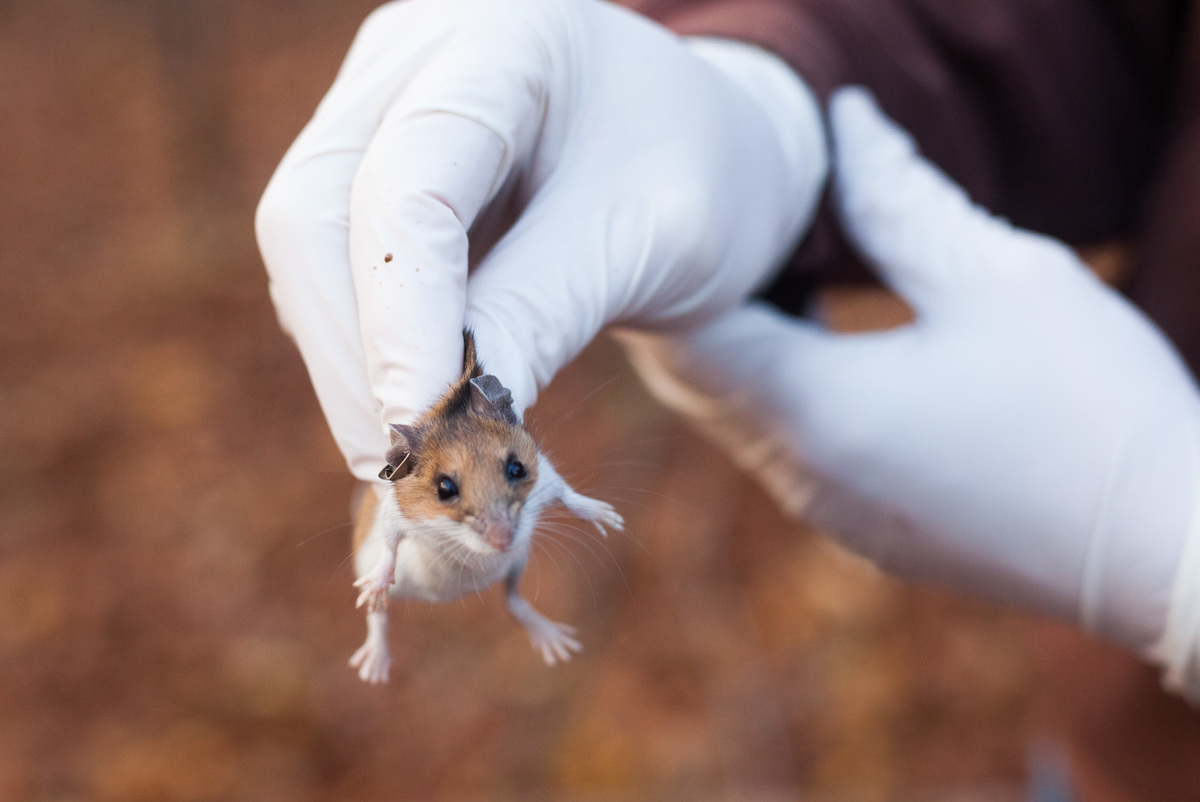 White-footed mice are efficient transmitters of Lyme disease in the Northeast. They infect up to 95 percent of the ticks that feed on them. But it's people who create the conditions for Lyme outbreaks by building homes in the animals' habitat.

Last summer Felicia Keesing returned from a long trip and found that her home in upstate New York had been subjected to an invasion. 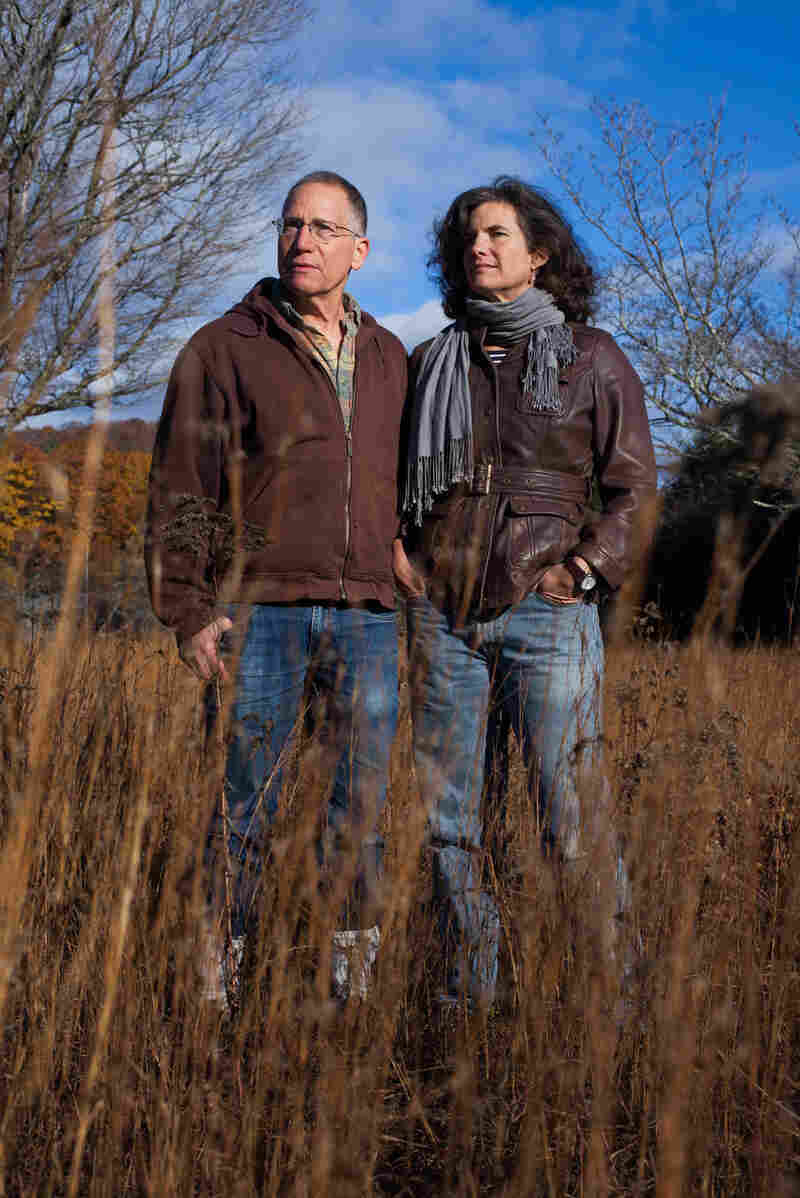 Rick Ostfeld and Felicia Keesing have been studying Lyme disease and ways to stop it for more than 20 years. The couple has come up with a way to predict how bad a Lyme season will be a full year in advance. Stephen Reiss for NPR hide caption

"There was evidence of mice everywhere. They had completely taken over," says Keesing, an ecologist at Bard College.

It was a plague of mice. And it had landed right in Keesing's kitchen.

"Not only were there mouse droppings on our countertops, but we also found dead mice on the kitchen floor," says Keesing's husband, Rick Ostfeld, an ecologist at the Cary Institute of Ecosystem Studies in Millbrook, N.Y.

The Hudson River Valley experienced a mouse plague during the summer of 2016. The critters were everywhere. For most people, it was just a nuisance. But for Keesing and Ostfeld, the mouse plague signaled something foreboding.

"We're anticipating 2017 to be a particularly risky year for Lyme," Ostfeld says.

Keesing and Ostfeld, who have studied Lyme for more than 20 years, have come up with an early warning system for the disease. They can predict how many cases there will be a year in advance by looking at one key measurement: Count the mice the year before.

The number of critters scampering around the forest in the summer correlates to the Lyme cases the following summer, they've reported.

The explanation is simple: Mice are highly efficient transmitters of Lyme. They infect up to 95 percent of ticks that feed on them. Mice are responsible for infecting the majority of ticks carrying Lyme in the Northeast. And ticks love mice. "An individual mouse might have 50, 60, even 100 ticks covering its ears and face," Ostfeld says.

So that mouse plague last year means there is going to be a Lyme plague this year. "Yep. I'm sorry to say that's the scenario we're expecting," Ostfeld says. 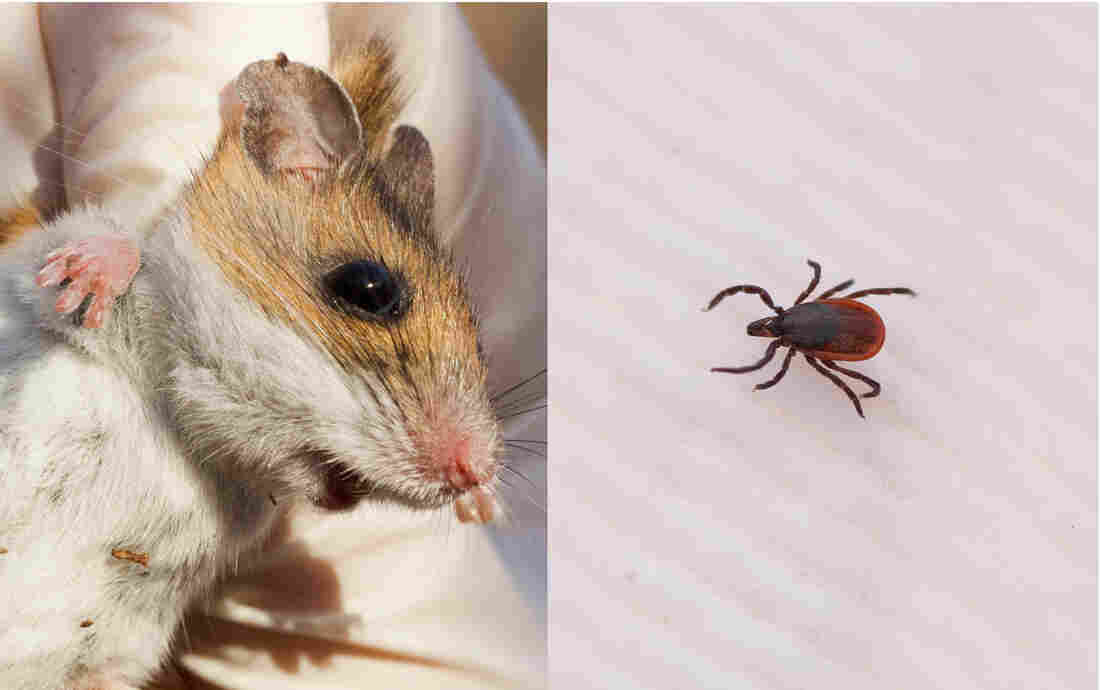 Mice and ticks get along swimmingly. Other animals, such as possums, groom away ticks — and sometimes kill them. But white-footed mice tolerate ticks covering their faces and ears. Blacklegged ticks, like the adult female on the right, are tiny — about the size of a sesame seed. Stephen Reiss for NPR hide caption

He's not exactly sure which parts of the Northeast will be at highest risk.

But wherever Lyme exists, people should be vigilant, says epidemiologist Kiersten Kugeler at the Centers for Disease Control and Prevention.

"Whether it's a bad season or not, there's still going to be a lot of human cases of tick-borne diseases," she says. "What's important for people to know is that the ticks are spreading to new areas — and tick-borne diseases are coming with them."

Back in the early '80s, the disease wasn't that big a problem. Cases were confined to two small regions: western Wisconsin and the area from Connecticut to New Jersey.

Did You Get Bit By a Lyme-Infested Tick? Here's What To Do

Since then, Lyme cases have shot up in number and spread in all directions: "The only place that they haven't really spread is into the Great Lakes and the Atlantic Ocean, for obvious reasons," says biologist Rebecca Eisen, who's also at the CDC.

Now Lyme is present in more than 260 counties, the CDC reported in 2015. The disease shows up in Maine, swoops down the East Coast into Washington, D.C., and southern Virginia. Then it hops to the Midwest into northern Indiana, Illinois, Wisconsin and Minnesota. There are also small pockets of Lyme on the West Coast.

Since the early '90s, reported cases of Lyme disease have tripled, to about 30,000 cases each year. The CDC thinks the actual number is 10 times higher.

"We think the true burden of Lyme disease in the U.S. is about 300,000 cases," Kugeler says. "Lyme disease is quite a big public health problem."

The reasons for this Lyme explosion are many, Ostfeld says. Climate change is part of it. The surge in deer — which feed ticks and spread them around — has also been a factor.

But Ostfeld has found another reason, something that happened more than 200 years ago.

Today the Hudson River Valley in upstate New York is gorgeous. The hills are covered with oak forests, and the valleys are patchworks of hayfields and farms.

But Ostfeld says the area didn't always look like this. When the Europeans came here hundreds of years ago, they clear-cut nearly all of the forests to plant crops and raise livestock.

"They also cut down trees for commercial use," Ostfeld says, "to make masts for ships, and for firewood."

Since then a lot of the forest has come back — but it's not the same forest as before, he says. Today it's all broken up into little pieces, with roads, farms and housing developments.

For mice, this has been great news.

"They tend to thrive in these degraded, fragmented landscapes," Ostfeld says, because their predators need big forests to survive.

Without as many foxes, hawks and owls to eat them, mice crank out babies. And we end up with forests packed with mice — mice that are chronically infected with Lyme and covered with ticks.

So all these little patches of forest dotting the Northeast have basically turned into Lyme factories, spilling over with infected ticks.

Then people come along and do the darndest thing, Keesing says: They build their dream homes right next door. "So we see that humans are putting themselves in these areas where they're most at risk," she says. 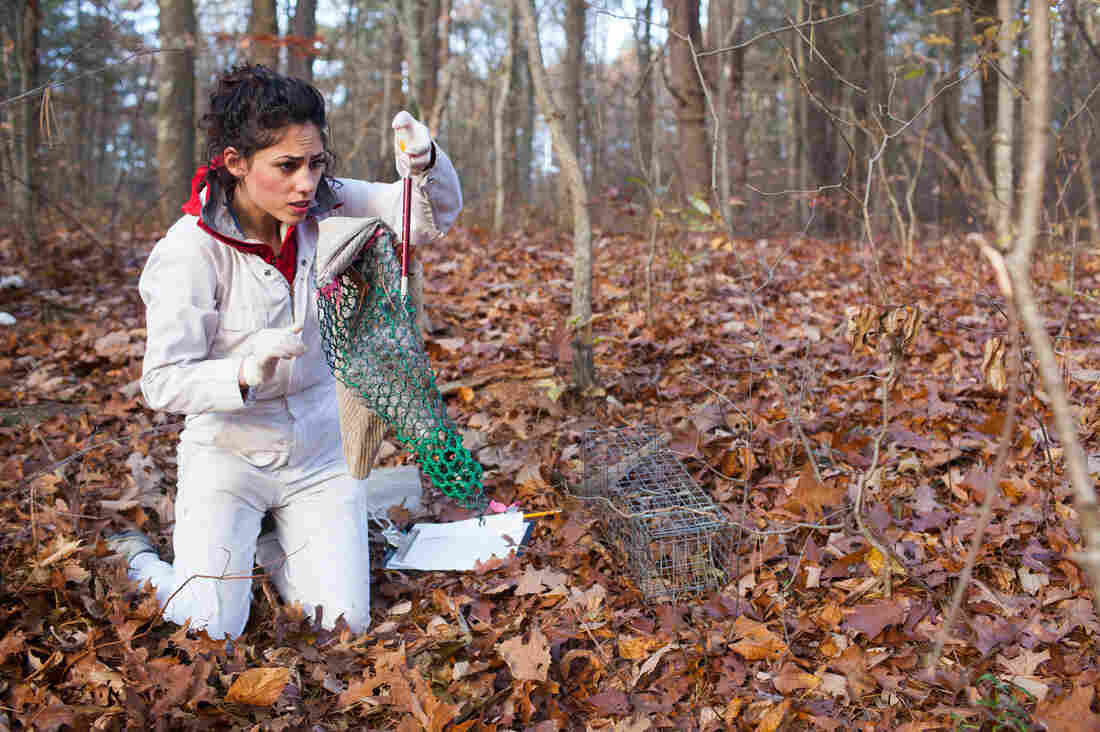 To figure out why Lyme has become more prevalent, researchers at the Cary Institute of Ecosystem Studies in Millbrook, N.Y., have trapped hundreds of thousands of rodents in the woods over the past 20 years. Research assistant Francesca Rubino checks a squirrel for ticks. Stephen Reiss for NPR hide caption

And that means people, in some areas, may be putting themselves at risk for Lyme every single day without even knowing it, says the CDC's Kiersten Kugeler. "In the Northeast, most people catch Lyme around their homes," she says. "People out gardening. People playing in their backyard. Mowing the lawn."

So what can you do to keep from getting infected? Add a tick check to your daily routine, Kugeler says. When you're in the shower check your body for tiny ticks, especially the places they like to hide.

"That's the scalp, behind the ears, the armpits and in the groin area," she says.

If you do find a tick, get it off as quickly as possible. The longer an infected tick stays on your skin, the greater the chance it will pass the Lyme bacteria on to you. Generally, it takes about 24 hours for the tick to infect a person after it starts biting.

Then be on the lookout for Lyme symptoms — like a red rash or a fever. It anything crops up, go see a doctor immediately. Don't wait: The earlier you get treated, the better chance you'll have for a full recovery.