Among the topics that the Dalai Lama discussed with John Oliver: fermented horse milk.

Like so many countries from the former Soviet bloc, Mongolia faced a terrible economic upheaval at the end of the Soviet Union. In the first few years, inflation went up over 250 percent; employment went down.

And people started drinking much more heavily. "Alcoholism was devastating during the economic hardships of the '90s," writes Jargalsaikhan Mendee, a political scientist and former Mongolian defense attaché to the United States, in an email to Goats and Soda.

The Dalai Lama says he made a difference. In an interview last Sunday with news comedian John Oliver, the Tibetan spiritual leader said, "I suggested [to the Mongolians] drink much less vodka. Instead of that, drink horse milk."

"You tried to wean them off vodka by giving them horse milk?" Oliver replied, incredulously.

"Oh yes. Then they follow," the Dalai Lama said. "Since then I think majority of Mongolians no longer any drink."

The Dalai Lama was actually encouraging people to drink more airag, a fermented brew made from mare's milk, Mendee says. It's a popular traditional beverage that has roots in Central Asian nomadic horse culture going back thousands of years and has an alcohol content similar to hard cider. The idea is that by consuming something less intoxicating than vodka, which is commonly drunk, people might be better off. Vodka often contains 30 or 40 percent alcohol whereas airag is around 5 to 10 percent alcohol by volume. 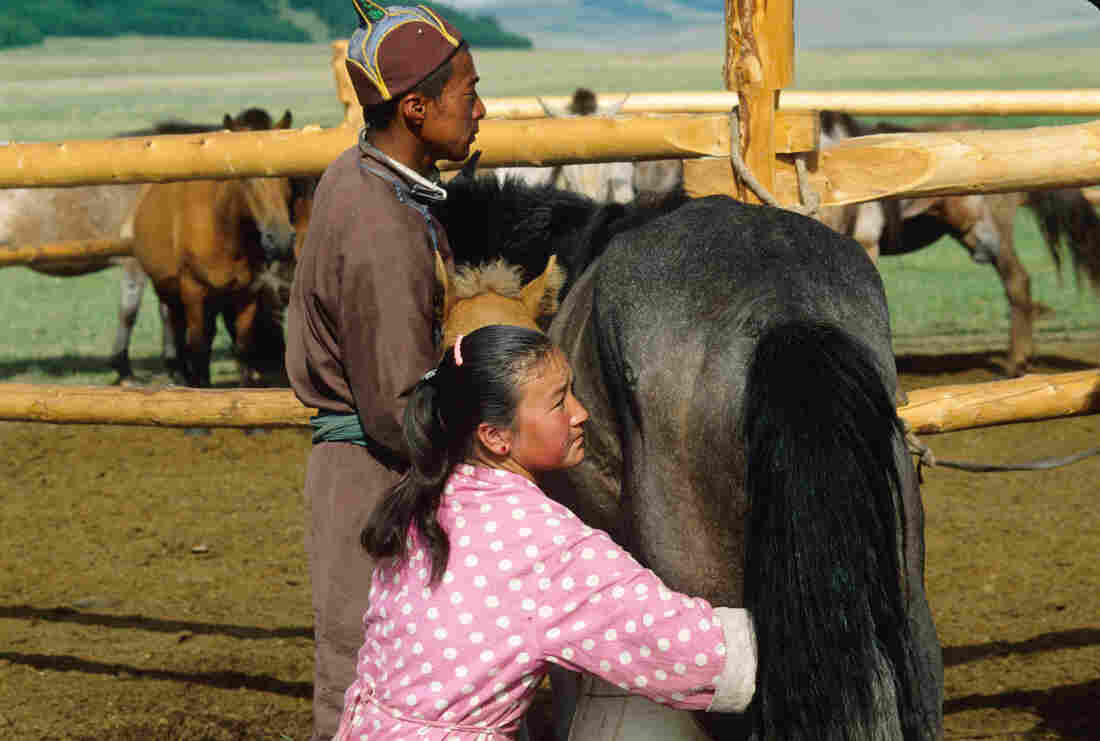 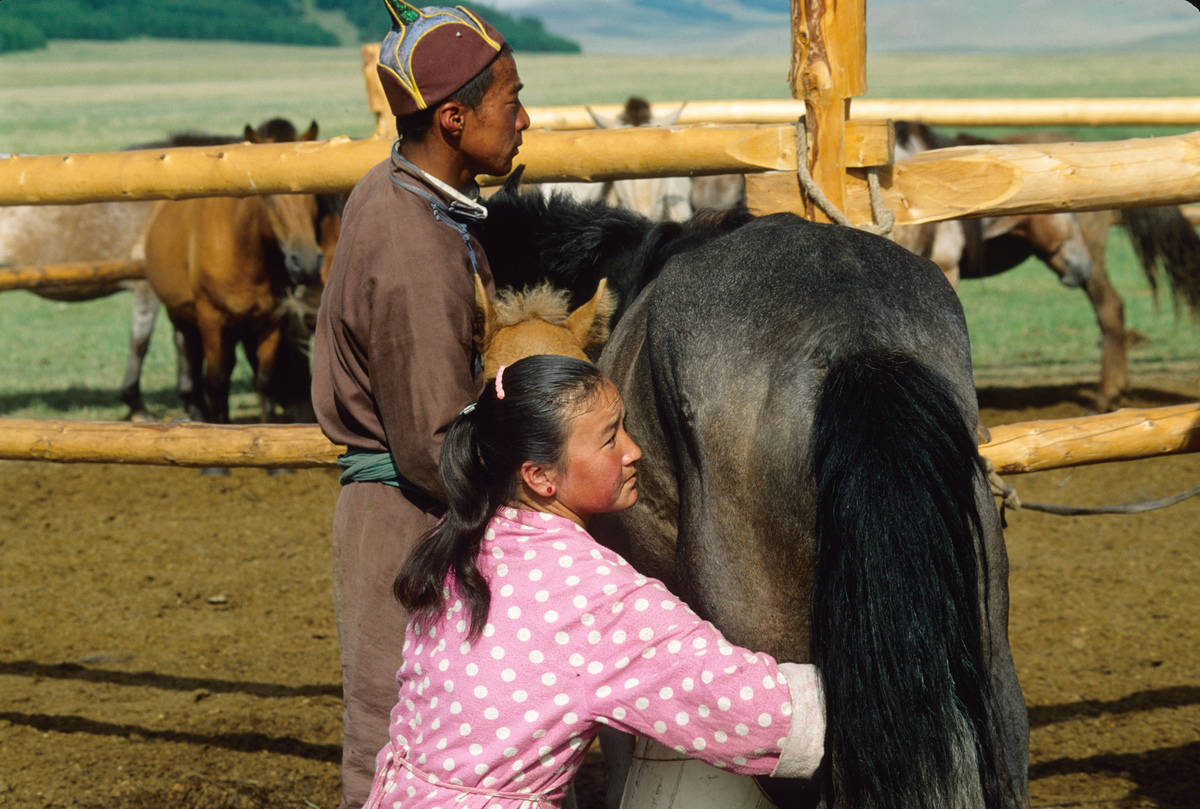 Milking a mare in Mongolia.

It's not clear when the Dalai Lama first encouraged Mongolians to lay off hard spirits. Some sources believe it was during his fourth visit to the country in 1995.

He hasn't been the only person promoting this message. The current president, Tsakhiagiin Elbegdorj, began making a similar request of his countrymen in 2011, sometime after the Dalai Lama's fourth visit to Mongolia. Ever since then the president has been urging people to toast with milk — the non-alcoholic variety pulled from goats, cows or sheep– and asking officials not to serve alcohol at government events. The president's office did not respond to a request for comment.

"Those were really good public health initiatives. When the Dalai Lama came up with that slogan for us, 'Drink less vodka. Drink more mare's milk,' that hit people a lot!" says Dr. Tsogtbataar Byambaa, the director of the National Center for Public Health in Mongolia. "A significant percentage of Mongolians are Buddhists. So many people here worship Dalai Lama." And Elbegdorj even received an award from the World Health Organization in 2012 for his efforts to reduce alcoholism. 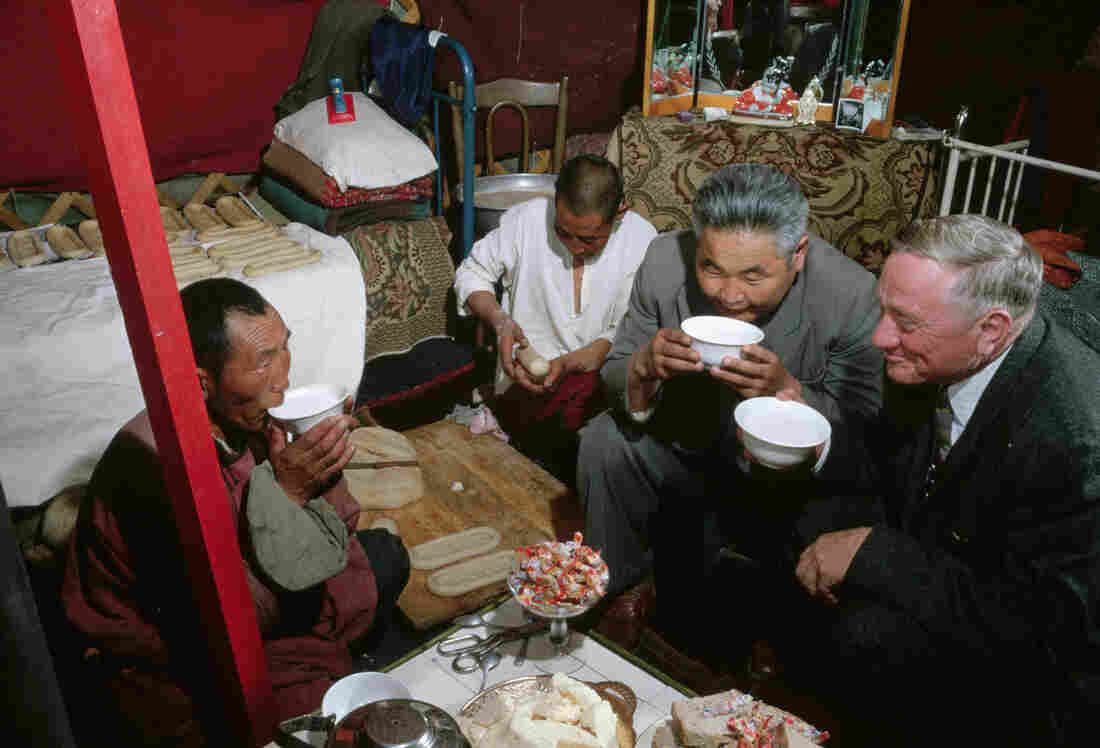 American Supreme Court justice William O. Douglas drinks fermented horse milk with herders in a yurt during his visit to Mongolia in 1961.

As the Dalai Lama claimed on Last Week Tonight, it does seem to be the case that most Mongolians don't drink regularly. Only about 36 percent of Mongolians have had an alcoholic drink in the last month based on a WHO survey from 2013, Byambaa says.

There is some indication that things changed in Mongolia between 2005 and 2009, however. The oldest WHO alcohol data on Mongolia is from a 2005 report, which put the percentage of drinkers at about 60 percent of the population. So the WHO data indicates that there really are fewer Mongolians who drink today than over a decade ago.

Liver Cancer Is Becoming A Top Killer In Poor Countries

But alcohol misuse is still a significant public health hurdle for the country, Byambaa says. "There's a mean number of standard drinks consumed per drinking occasion, he says. "That's 9 for us. Think about that number for a second."

The WHO surveys suggest that many Mongolians who do drink are binging on a staggering amount of booze, Byambaa says. That volume hasn't changed much since 2009 either. "[The mean number of drinks per occasion] was 8.8 drinks in 2009. That one went up a little bit," Byambaa says. "It's very alarming."

Did the Dalai Lama and Elbegdorj's call to "drink milk, not vodka" have any effect on Mongolian drinking habits? Byambaa demurs to the question. "I can't quantify the effect of that," he says. "Anecdotally? Well, I can't say anecdotally."

He added with a chuckle: "Well, who am I to judge Dalai Lama?"

Mendee is a little more forthright on the issue. "I don't think that Dalai Lama and Elbegdorj changed it," he says. After the country's hard transition from communism to a market economy, Mongolia has enjoyed steady economic growth since the mid-1990s. Mendee thinks that economic improvement may have done more for alcohol misuse than public health campaigns from dignitaries. Beer and wine are getting more popular nowadays, Mendee adds.

As to whether or not people have begun drinking more fermented mare's milk since His Holiness endorsed it, Byambaa says that airag has always been popular. "Yeah, I don't know. It looks like milk. It's sour," he says. "I like it. It's my favorite."