Accessibility links
Study: How Do Nepalese Porters Carry So Much Weight? : Goats and Soda Nepal's porters carry loads that can weigh more than they do, whether they're toting gear up Mt. Everest or carrying goods to market. A new study tries to figure out how they do it. 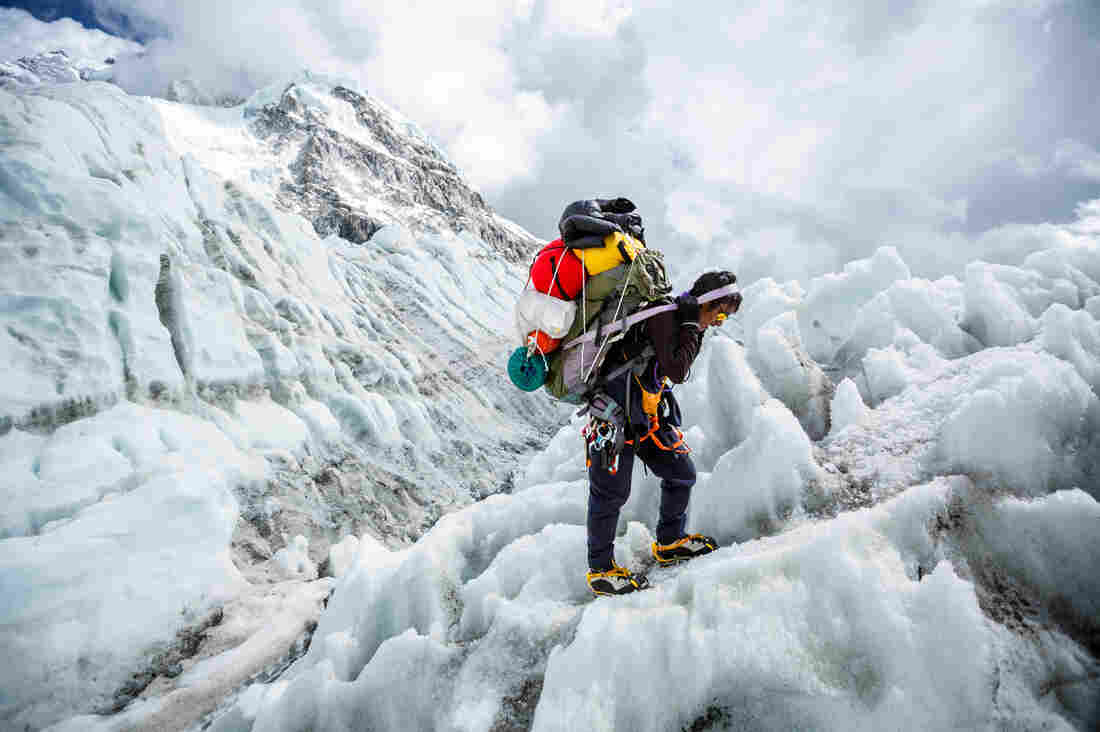 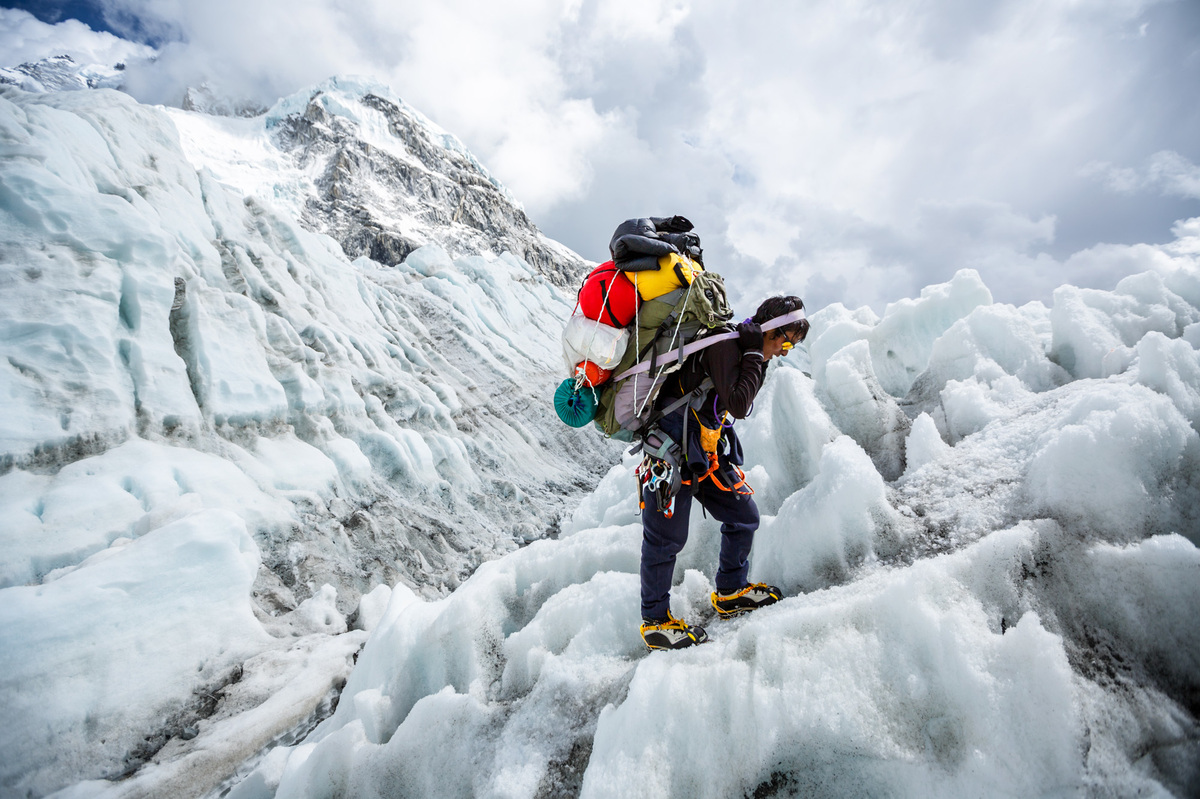 A sherpa on the Khumbu Ice Fall — an obstacle faced on Mt. Everest.

Trekking season begins this month in the Himalayas, and visitors are sure to experience a common — if jaw-dropping — sight: local porters carrying towering loads on their backs, often supported by a strap over their foreheads.

Their packs are sometimes heavier than their bodies, says Norman Heglund, a muscle physiologist of Belgium's University de Louvain. Think: a 150-plus pound pack on a 125-pound man.

And the porters carry their cargo up and down mountains, day after day, year after year.

Trekkers often wonder how the porters manage such feats of strength and endurance. As a scientist, Heglund had the equipment and experience to find out.

In previous research, he had discovered some invisible tricks of bodily movement that Kikuyu women in Kenya use to carry heavy loads on their heads – altering their gait in subtle ways to conserve energy so they use fewer calories than a Westerner would given the same task. He expected to find similar results among porters, who he says, are "the ones who carry the biggest loads [proportional to body weight] under the worst conditions."

But when he and colleagues measured the movements of Nepalese porters, they reported in a recent study, they didn't find anything particularly special about how they walk.

They simply go. And they keep going.

"They haven't got any trick," Heglund says. "And what they do is pretty amazing."

For the study, he spent half a year in Nepal, where he set up a field site on a busy trade route in the Everest Valley.

The route starts in Jiri, at the end of the road from Kathmandu toward Mt. Everest. From there, professional porters regularly carry food and other goods over about 60 miles of steep terrain that takes more than a week each way and includes more than 26,200 vertical feet of ascents and more than 20,000 feet of descents. Their destination is a bustling marketplace in Namche.

About half a day's walk before Namche, Heglund and his team offered lemonade and cookies to any porter who would agree to get weighed and then filmed while walking over a 10-foot long platform made out of force plates that were placed on a flat stretch of ground. Electronic equipment and computers allowed the researchers to measure how much work went into each stride.

It was a popular offer that revealed just how hardcore the porters are. On average, the men carried nearly 90 percent of their body weight. A quarter of them carried more than 125 percent of their own weight, according to the new study, which appeared in the Journal of Experimental Biology. The heaviest load, Heglund says, totaled 175 percent — or nearly twice as much as the porter's weight. The porters in the study weighed between about 100 and 140 pounds.

The women carried an average of 70 percent of their weight – a good 10 percent more than the heaviest of loads carried by women in the African studies.

Compared to the muscles of European graduate students, the study found, the porters' muscles were slightly more efficient at turning oxygen into work. But there was nothing unusual about their gait or energy use.

That finding emphasizes just how remarkable the human body is, says David Carrier, a comparative biomechanist at the University of Utah in Salt Lake City, who was not involved with the study.

A physically fit American can comfortably carry a backpack loaded with 25 percent of his or her body weight, he says. But even people in good shape start to crack after a day or two in the mountains with twice that much weight on their backs.

Carrier suspects that Nepalese porters adapt over a lifetime of carrying loads, often beginning in childhood. And injuries appeared to be remarkably rare, Heglund found in his informal interviews, perhaps because the porters tend to move slowly. If they were running late for the Saturday morning market, he says, they would walk late into the night to get there in time. But they wouldn't ever go fast.

What all that load carrying does for the long-term health of porters wasn't addressed by the new study. Some recent research has found that compared to other Nepalese groups, porters have worse diets, lower rates of school attendance and higher risk of anemia. A variety of organizations now advocate for porter health, with some progress to report: guidelines now recommend a 66-pound limit for porters who work for the tourism industry, Heglund says. Still lacking are regulations for porters who do commercial work.

The new results are unlikely to provide much in the way of advice for Westerners who want to carry more weight without paying a price, Carrier says. Without a lifetime of practice, we might just be permanently soft.

"What these porters are doing, from our perspective, is sort of unimaginable," he says, even for athletes. "In Western society, we no longer have a real handle on what humans can do physically because we're so far removed from this level of daily work that we physically can't do it anymore."