Accessibility links
NCAA March Madness Can't Match Thrills Of March Mammal Madness And Its TB-Sniffing Rat : Goats and Soda Because what mammal can take down a rodent that sniffs out land mines as well as TB — and jumps 5 feet in the air? Surely not tonight's competitor, the maned wolf.

In March Mammal Madness, Our Money's On The Giant Pouched Rat

In March Mammal Madness, Our Money's On The Giant Pouched Rat 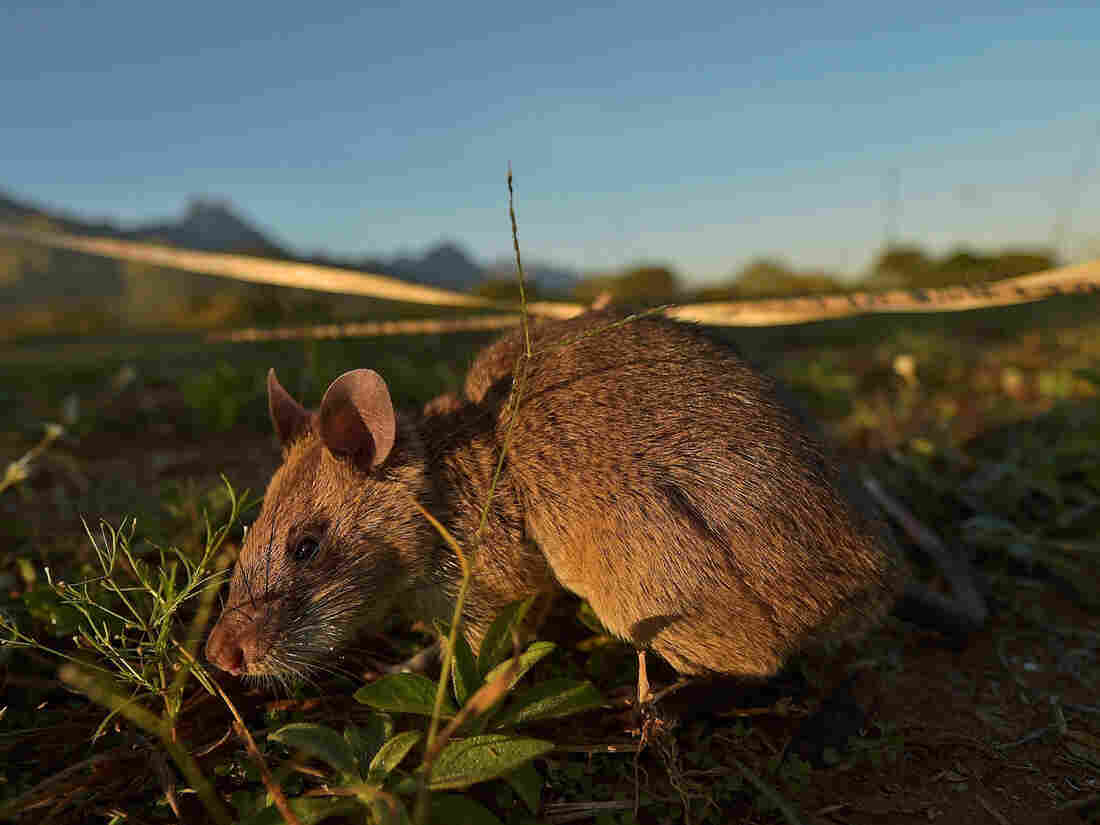 An African giant pouched rat sniffs for traces of land mine explosives at a training facility run by APOPO, a nonprofit that trains the rats to detect both tuberculosis and land mines. Not only does it have an excellent nose, but it can jump 5 feet in the air. Carl De Souza/AFP/Getty Images hide caption 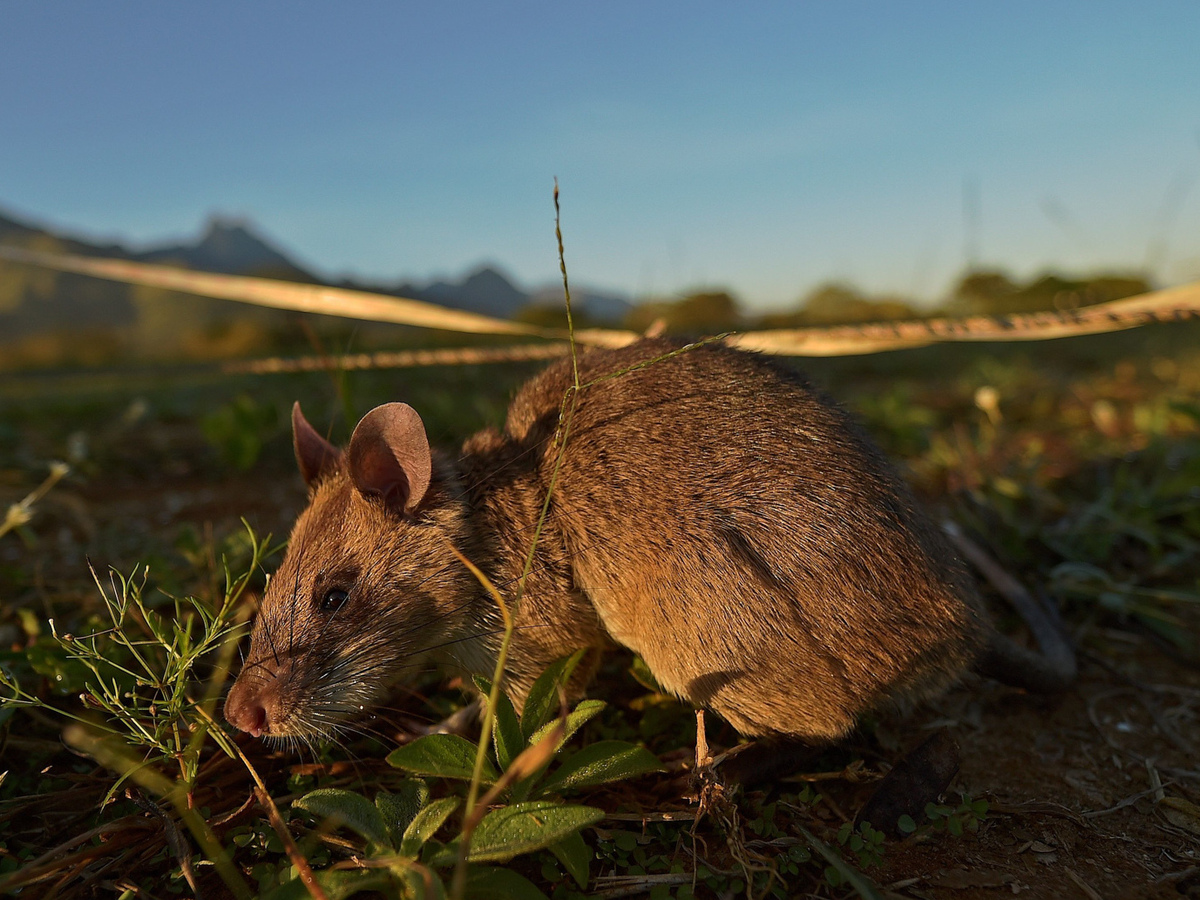 An African giant pouched rat sniffs for traces of land mine explosives at a training facility run by APOPO, a nonprofit that trains the rats to detect both tuberculosis and land mines. Not only does it have an excellent nose, but it can jump 5 feet in the air.

March Mammal Madness may be more thrill-packed than the NCAA's version of March Madness.

Sure, basketball players can jump. But can they jump like the giant pouched rat, which leaps 5 feet in the air? Not only that, the mega-rodent, weighing in at around 3 pounds, can sniff out land mines and identify TB in sputum samples.

In the first round of the mammal tournament, the pouched rat (seeded 11th in its bracket of 16) took on the bat-eared fox (seeded 6th).

Watch the pouched rat appear at the 2 minute mark.

The fox quit after the rat used its sneaky leaping skills to jump on the fox's head and run down its back.

Okay, so the animals didn't actually fight. What happens in the tournament is this:

Animals are paired up, just like basketball teams. Then a group of scientists imagines what an evidence-based battle would look like. They consider each animal's temperament, body armor (if that applies), weaponry, fighting style and other factors. Adding in an element of chance, they create a story of what would happen if the two animals clashed.

Fans can follow along live on Twitter at #2017MMM or find archived results through Arizona State University, which also offers a printable bracket, showing which animals face each other as the tournament progresses.

The first "round" took place last Wednesday. Videos, created by fans and narrated by animal puppets, summarize the results with help from real photos and video footage of the animals.

No animals are harmed in these battles, which, of course, do not really take place.

Thousands of people play, printing out the bracket and picking their favorites, Up to tens of thousands more check in, according to Katie Hinde, the anthropologist at Arizona State University who started the tournament. Educators keep tabs, too, using the event to teach their students about the biology and conservation of small and medium-sized mammals.

Danielle Lee, a mammalogist and animal behavior scientist who studies pouched rats at Southern Illinois University, Edwardsville, says the pouched rat had the upper hand because the fox didn't see it as potential prey. Normally, bat-eared foxes pounce on smaller prey, like grasshoppers, rodents and dung beetles. The pouched rat was too big and tenacious to fall for the fox's wily ways.

"In the end," says Lee, who live-tweeted the battle, "the pouched rat's moxie is what gave it the advantage."

In one of Lee's first tweets about the imaginary battle, which took place between the two creatures after sundown on imaginary open grassland last Wednesday, she wrote that the pouched rat reared up on its hind legs and sniffed the air.

That move illustrates a keen sense of smell that has also propelled the pouched rat into high-profile scientific collaborations off the battlefield. In Tanzania and Mozambique, a group called APOPO trains the rodents to sniff out tuberculosis in samples of human mucous. They call their animals "HeroRATS."

The TB-sniffing rats are faster and cheaper than traditional lab techniques for diagnosing TB, according to APOPO. The organization has also used giant pouched rats to sniff out land mines in Cambodia, Thailand and elsewhere.

Can the pouched rat advance another round?

It's not a sure thing. In its next battle, Thursday at 8:30 p.m. ET, the pouched rat will face off against the maned wolf, which weighs around 50 pounds and is about 60 inches long. It's seeded third in the bracket.

Even if the rat loses, it's got its day job to fall back on. There are plenty of land mines and TB samples just waiting for a sniff.