Accessibility links
Powdered Vaccine Raises Hopes Of Stopping Rotavirus, A Top Killer Of Kids : Goats and Soda It's aimed at rotavirus, a nasty pathogen that can cause diarrhea and kills more than 500 children a day. The secret to the vaccine is the same thing that makes space ice cream so cool. 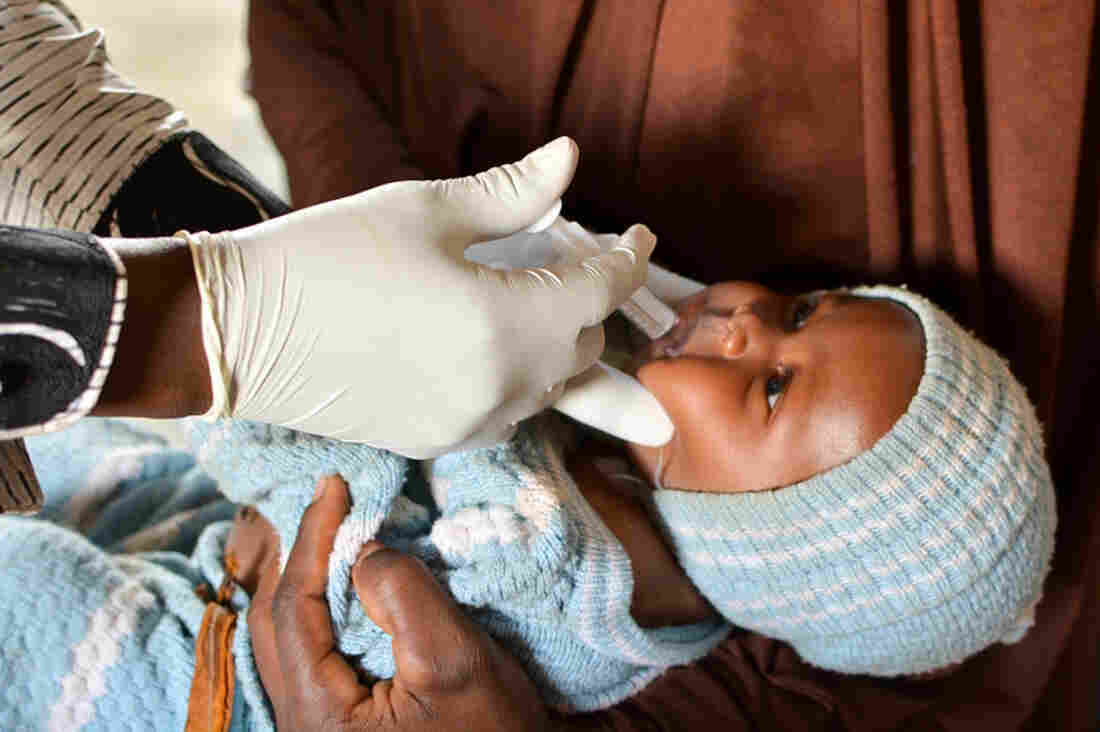 A baby receives the rotavirus vaccine during a clinical trial in Niger. The new vaccine is the first designed specifically for children in sub-Saharan Africa. It doesn't require refrigeration and will be cheaper than ones currently available. Krishan Cheyenne/MSF hide caption 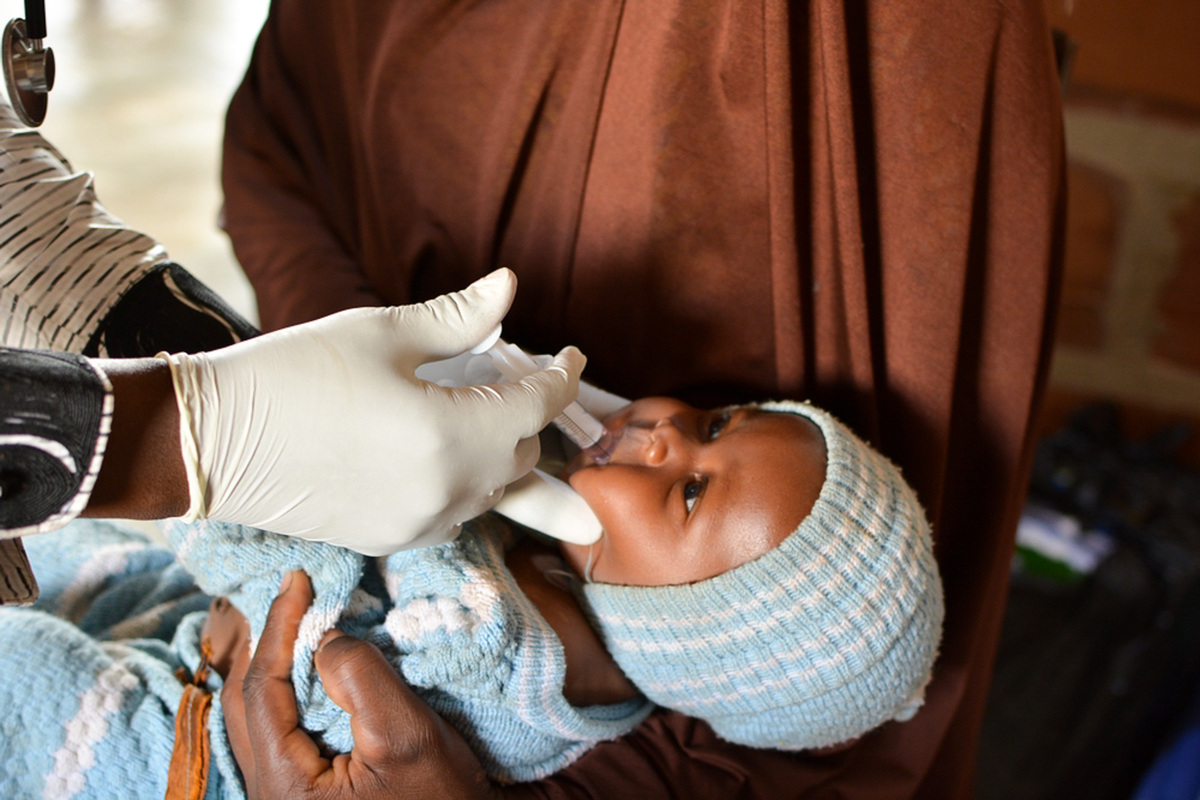 A baby receives the rotavirus vaccine during a clinical trial in Niger. The new vaccine is the first designed specifically for children in sub-Saharan Africa. It doesn't require refrigeration and will be cheaper than ones currently available. 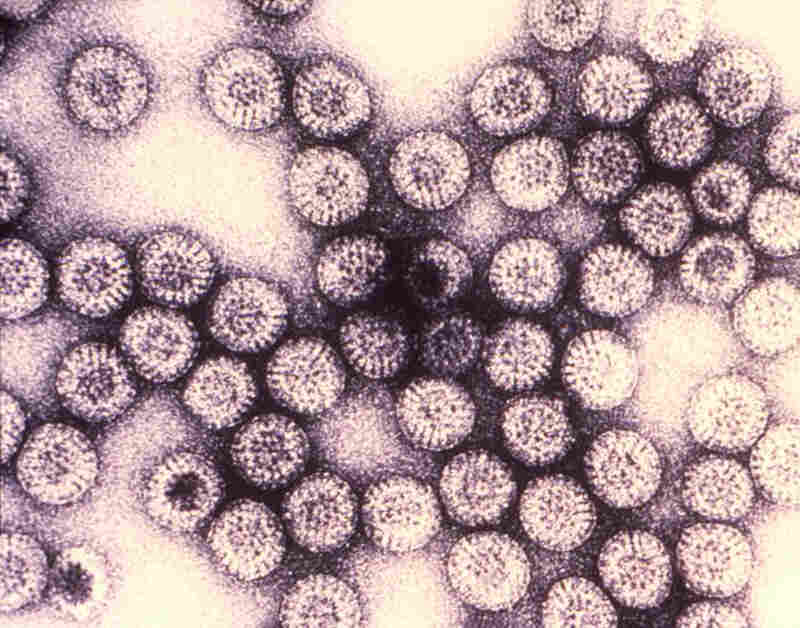 Rotavirus is the most common cause of diarrhea in children worldwide. By age 5, nearly every child around the globe has been infected. Dr. Erskine L. Palmer/CDC hide caption 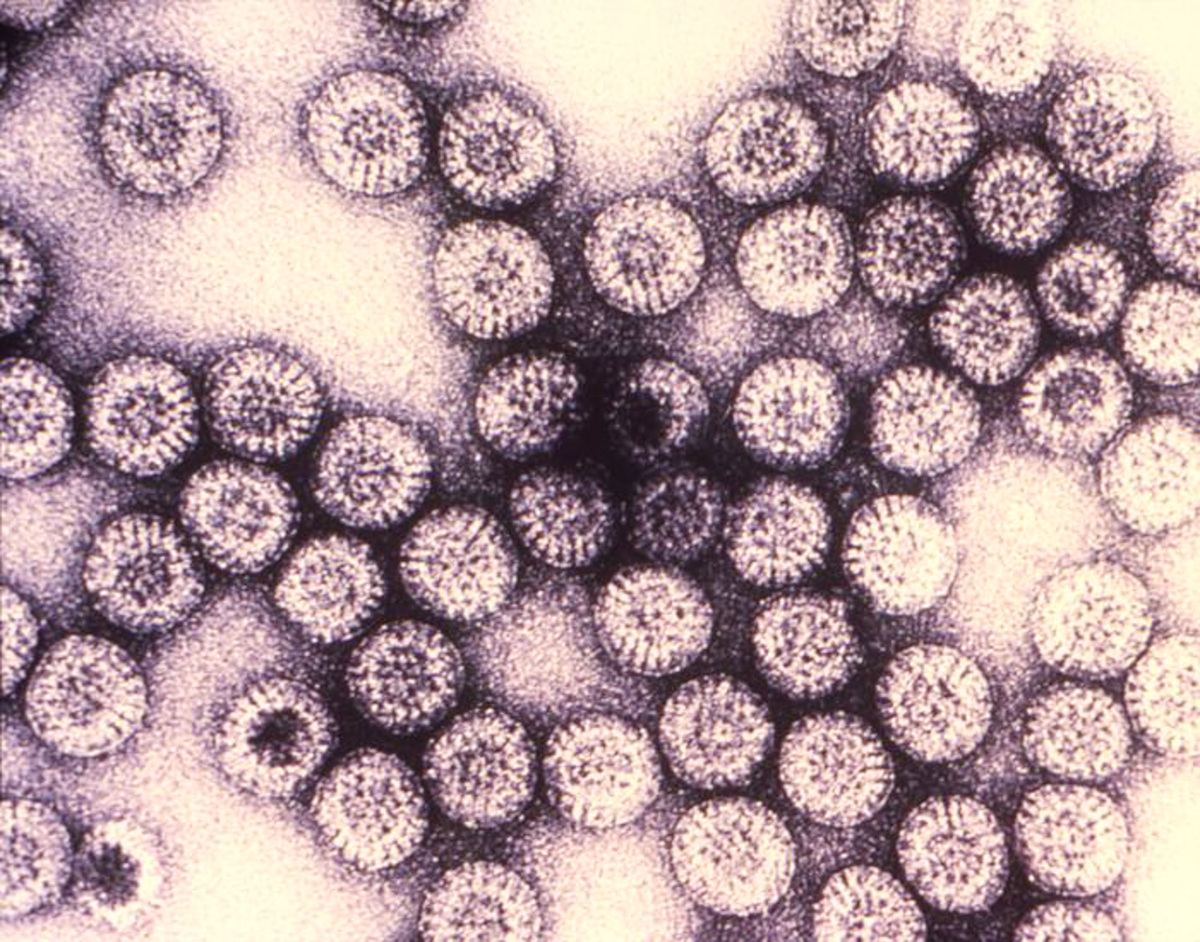 Rotavirus is the most common cause of diarrhea in children worldwide. By age 5, nearly every child around the globe has been infected.

It's not every day that the world gets a new tool that could save 100,000 children each year.

And it's definitely not every day that the secret to that tool is the same thing that makes space ice cream so memorable.

Sounds crazy. But bear with me a moment.

Scientists say they have a new vaccine that's about 70 percent effective against rotavirus — a nasty little pathogen that gives children bad diarrhea here in the U.S. but kills more than 200,000 children each year in developing countries.

This oral vaccine isn't the first for rotavirus. Several versions have been available for more than decade. One of them has drastically slashed the number of rotavirus cases in the U.S.

But this is the first rotavirus vaccine specially designed to be effective where kids need it the most — in sub-Saharan Africa, scientists report Wednesday in the New England Journal of Medicine.

"The bottom line is: This is a fantastic new development," says Zulfiqar Bhutta, who studies global health at the Hospital for Sick Children in Toronto and wasn't involved in the study.

All previous rotavirus vaccines need to be refrigerated. So they haven't been as useful — or effective — in sub-Saharan Africa or southern Asia, Bhutta says.

But this new vaccine can sit at room temperature for years and at temperatures around 100 degrees Fahrenheit for months.

So the vaccine — called BRV-PV — is more likely to work in places where there's no electricity or health clinics, Bhutta says.

"You don't have to lug a cold box scores of kilometers to reach kids in very rural places," he says. "This is important for increasing the reach of the vaccine, for reaching those who need the vaccine the most — the poorest of the poor."

To make the vaccine stable at room temperature, scientists at the Serum Institute of India borrowed a trick from the food world: They freeze-dried it.

They literally dunked the vaccine into liquid nitrogen and then sucked all the water out of it with a vacuum. All that's left is a dry powder that's stable sitting on your desk or on a truck driving many miles to a rural area.

When the vaccine is ready to be used, a health worker simply dissolves the powder in a salt solution and puts a few drops on a baby's tongue.

BRV-PV still needs to be approved by the World Health Organization. But it is well on its way, says Rebecca Grais at the nonprofit Epicentre, who led testing of the vaccine.

In an experiment that started in 2014, Grais and her colleagues tested BRV-PV on more than 3,500 babies in Niger. They found the vaccine was just as safe and effective as those available now. When babies received three doses, BRV-PV cut the number of severe rotavirus cases by more than two-thirds.

"And once it's approved, the vaccine will be cheaper than current ones," Grais says. "We can't say how much yet, but the price will be lower."